Pirates of the Caribbean: Tides of War Mobile Review 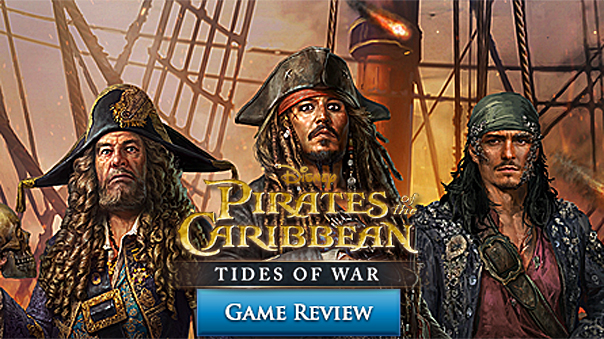 Pirates of the Caribbean is one of those franchises that never seems to die. Just like the undead pirates, the movies have had this weird longevity that common sense can’t seem to explain. So with the latest movie comes yet another spin-off game for those really looking to have more Pirates in their lives.

And that’s where Pirates of the Caribbean: Tides of War comes in. From JoyCity Corp. the game is a simulation/strategy title for the android, iOS, and Facebook Gameroom platforms. The game puts you in the middle of Jack’s campaign against the East India Trading Company who seeks to eliminate piracy. As one of the pirates who was contacted by Sparrow, your task is to build up your base of operations to fight against the East India Trading Company, while at the same time trying not to be killed by the other pirates surrounding you. 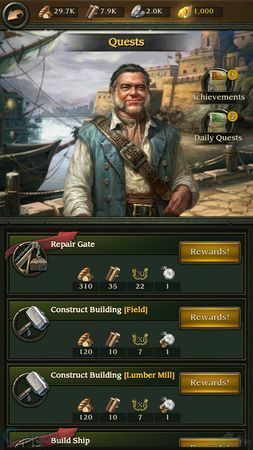 Tides of War’s gameplay system follows the typical sim-strat setup. You build your pirate army (not sure if it’s right to call a group of pirates an army, but anyway) through gathering resources from resource infrastructures that you can build and upgrade. You will have to discover ships, unlock upgrades, and hire crew mates (which you can also upgrade) to build up your overall army strength.

As you build up your base and pirate army, you will also have to invade or pillage other player controlled islands just like actual pirates (in Pirates of the Caribbean at least). You can also attack mythical sea creatures that the game seems to litter your location with. These creatures also net you resources and sometimes time speed-up items that would help you in the long run. 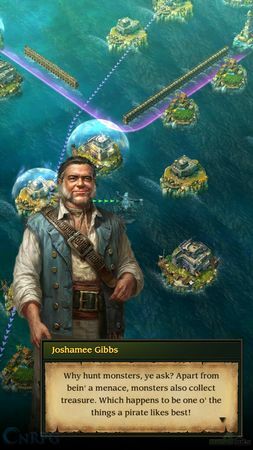 Similarity to another JoyCity Game

Usually, getting a reskinned version of another existing game is a bad thing. But JoyCity gets a pass with Tides of War. Since I’m assuming there will be more people experiencing the Oceans & Empires gameplay experience with ToW first. But the real reason why I’m giving Tides of War a pass is that the artwork and visual direction Oceans & Empires has fits right into the whole Pirates of the Caribbean feel. So it can easily be interchangeable between the two with Pirates recognized more, just because it’s an ongoing and existing franchise. 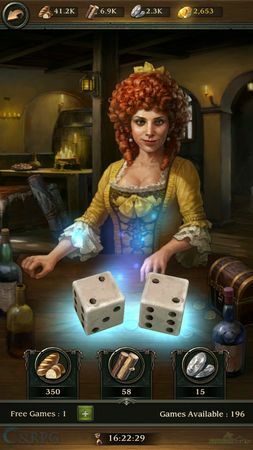 However, even if the game’s just a reskinned version of Oceans & Empires. Tides of War digs deep into the whole Pirates of the Caribbean lore to make the game experience slightly different. You get to see franchise mainstays like Will Turner and Elizabeth Turner joining in on some of the action.

Also, the game has some solo play elements that are Pirates themed. You’ll be reliving some of the crucial scenes in the movies as you try to regain Jack’s memories. And these scenes can go as far back as the first Pirates film. 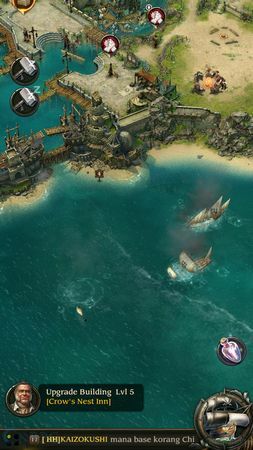 Tides of War doesn’t veer away much from the already set standard by other titles out there. And it seems that JoyCity decided to go through with the “overwhelm-players-with-things-to-do” system. So you’ll start to do a lot of the familiar questing that you find in free-to-play titles like Tides of War. This doesn’t mean that the game’s bad though. In fact, the number of quests keeps the interest from waning well into the game’s late game experience.

I like that you get to retrace the whole Pirates of the Caribbean experience through the story mission. It makes you feel like the game is at least tied to the whole rich lore of Pirates. However, the game doesn’t have much to go on after that. The game then plateaus and won’t keep your interest long even with the seemingly regular event updates the game throws at you. It’s still a F2P title, with a lot more bells and whistles than the competition.

It’s one of the better spin-offs I’ve played as of late with JoyCity seemingly being able to develop the game from what they gleaned from Oceans & Empires. So from a gameplay standpoint Tides of War is a solid contender. The game’s fluff material is also on point, since I don’t think you can go wrong with referencing existing story from the films, unless you do a Shyamalan and decide that the source material needs a sudden twist ending to it.

Another good point for Tides of War is the way that the game is available on not just the Android and iOS, but also Facebook’s Gameroom. This is a big deal because you can now also play Tides of War on the PC without downloading any of the available Android or iOS emulators out there. I also like that the game updates your status no matter which platform you play.
Conclusion: Great (4/5)

Overall, Pirates of the Caribbean: Tides of War is a solid simulation-strategy title. Though this should be attributed more to the already robust gameplay that Oceans & Empires has already pioneered. JoyCity was able to adjust the design and look of Tides of War to maximize the IP property they’re using. And on its own, even without the knowledge or experience from Oceans & Empires, Tides of War is a game that will make you think that no one created a game similar to this at all.

If you’re a fan of the Pirates of the Caribbean or any of its subsequent films and spin-offs, Pirates of the Caribbean: Tides of War is a definite game to download. It’s one of those F2P titles that is able to maintain the balance of experiencing a F2P title and at the same time a franchise themed mobile game. It has a solid enough gameplay system that even those who aren’t familiar with the franchise can and will enjoy the game immensely.

Pirates of the Caribbean: Tides of War Mobile Review