Phantom of the Kill Mobile Review 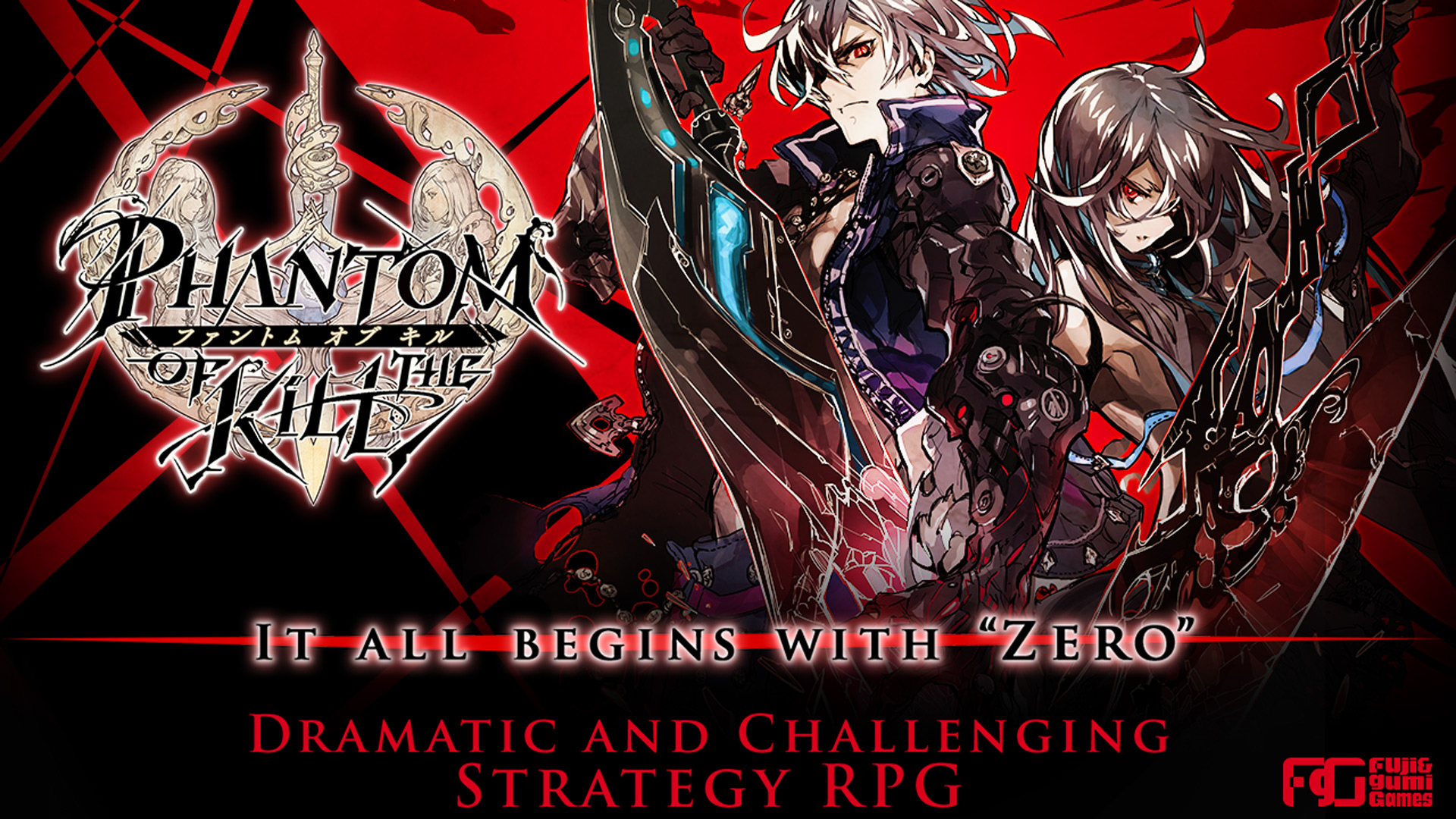 Like most old school gamers, there’s a huge place in my heart for Tactics RPGs. However with titles such as Final Fantasy Tactics, Disgaea, and Front Mission Online, there aren’t many new titles that are really able to compete with the legendary tactics games of nostalgia fame. Phantom of the Kill by Fuji&gumi Games is the latest to step into the arena though. 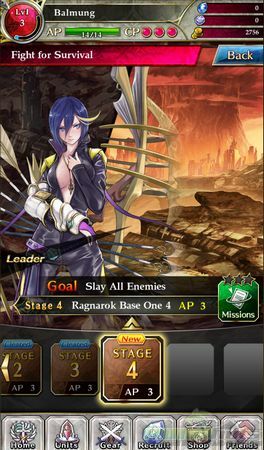 Like all Anime mobile games these days, the game is broken up into worlds and stages.

Phantom to Kill is an online anime based tactics game that is currently available for free on Android. The game puts you in charge of a ragtag army of units and magical beings called killer princes and princesses tasked in saving your kingdom from an invasion of zombie-like creatures all the while saving a real princess to round out the day.

Straight out of the gate, the game is visually stunning. The anime based art is well done and typical of what you see in current Gundam anime series or game based anime like Sword Art. The game actually starts off with a full motion video that really gives you a feel for the Nordic high fantasy setting. We are introduced to some key characters which of course includes the powerful princess and her unlikely hero. The video itself is an instant testament to gumi’s dedication to high production value. It’s almost like watching a short anime.

The in-game graphics are beautiful as well, standing strong against their mobile game competitors. The amount of detail makes you double check you didn’t pay for access to start playing. Animation of the battle sequences are certainly worthy of a buy to play price tag. Each character feels alive, moving in a colorful but smooth blur. Please note though that because of the nature of the graphics, older or lower spec mobile devices might have trouble running the game. 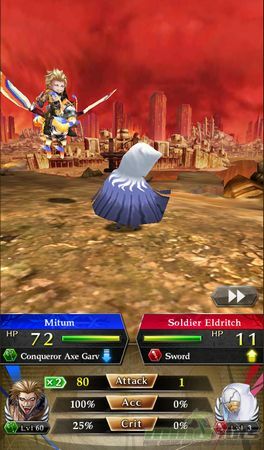 Visuals are the biggest selling point on this game. It's clear the graphics department got all the love.

One thing to note with this game is the size of the download. The initial download of the game from Google Play Store is just about 30MB but the game has an additional 600MB download before you can actually start playing. You’ll need a good stable connection as it takes a bit of time to download. I would suggest to use a standard wifi connection as opposed to mobile data to make it quicker (and cheaper on your phone bill!). Which brings me to problem with the game. It generally needs a stable internet connection for you to play properly. Once it has a hard time connecting a pop up error will appear on screen stopping you from being able to continue.

As this is a tactics game, gameplay consists of you deploying units on a grid style battlefield, directing them on the field and unleashing their attacks. However, unlike other Tactics games where you get to choose what kind of actions to take against your enemies, it becomes painfully obvious that all you really get to do is move units then choose to attack. Once the units attack, there isn’t an option to do anything really but just watch the animation which admittedly looks cool at first but later gets very repetitive.

Visuals are the biggest selling point on this game. It's clear the graphics department got all the love.

And I think that’s really the problem of this game. It’s very repetitive, hurting its long term replayability. I tried playing the game for a few hours figuring out what else I could do, but the tactics gameplay is pretty much it. Well there is an element of community. Like another game, Grand Sphere, before going into battle, you can select a unit owned by another player online whom you can bring into battle. Usually these units are very strong compared to your own units so they can easily unleash very strong attacks. You can then friend that player online. But to what purpose that serves, I have no idea as I never got around to finding out. All it seems to offer for now is breaking the balance in progression so you can skate through hard missions with OP characters.

The saving grace for replayability again comes in the high production value – namely the backstory. As the opening video suggests, you are embroiled in the affairs of a nation under siege by horrific monsters. The story gets told between matches as key characters exchange dialogue. It is presented in the typical fashion of many JRPGs where you only get to see still shots of the characters rather than full motion videos. It almost feels like reading a manga in the way that you see characters talk to each other and to you. But to be honest, the characters seemed so flat and uninteresting that they are very forgettable.

You do get the chance to talk to the main protagonist of the game; a man by the name of Zero. Through character exposition, you find out that he’s a special project created to be part demon to fight other demons and monsters. That alone should sell my case on this game’s characters being generic tropes. 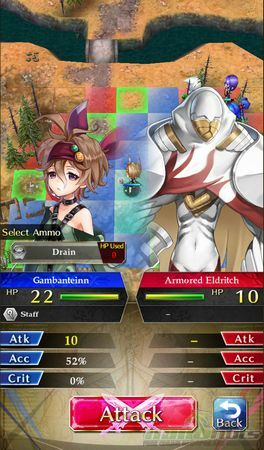 Tactics RPGs usually overcome repetitive gameplay with solid story. But Phantom of the Kill didn't sell me on the characters.

The music and sound contributes to the overall feel of the game. It sells the world’s setting well, and keeps you somewhat immersed in it. The sound effects are spot on and add to the flavor of battle to keep you entertained. While the combat itself can get stale from repetition, I never felt the sound effects were to blame.

There’s not much that can be said about the graphical interface of the game as it tends to be pretty straight forward. However, I did feel that controls were a bit clunky, and it actually took me a while to figure out how to select and move units about. There is no indicator as well with regard to range of character units, which for me is very important when considering strategy for a tactics game. If there was, I couldn’t find it which says a lot about the display. Display-wise I was confused by all the information on the screen so I was never really sure what was going on. Sure, I keep seeing that I am levelling up and I am getting new items, but I wasn’t sure how to access them either.

Overall, the game is a mixed bag of well implemented and lack luster elements. The art, graphics, sound, and animation are rock solid and a great addition to the tactics RPG genre. However, the game can be very repetitive, lacking in the creativity department as the story never inspires. Though tactics RPG fans typically have a higher tolerance for repetition than most, the actual controls turn up as the worst part of this game. Plus the need for solid streaming connectivity can make this mobile game not so hot when on the go. At the end of the day, the free to play genre still lacks a AAA tier tactics RPG. If you really don’t have the cash to buy into one, Phantom of the Kill is a decent alternative.