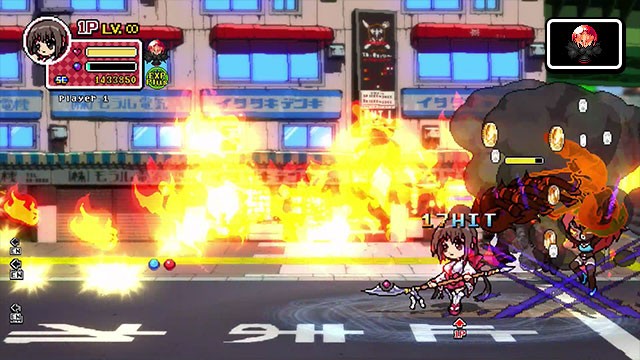 Phantom Breaker is a rather obscure title that was originally a fighting game. Developed by 5pb, it was an anime-style fighting game, 2D, and featured two different styles of combat (Quick and Hard). Released on both the Playstation 3 and Xbox 360, it would receive a spinoff in the form of a beat ‘em up called “Phantom Breaker: Battle Grounds,” and a version would eventually find its way to the Playstation 4 in “Overdrive”! Overdrive offers four play (Local and Network) play, with four characters from the original fighting game: Mikoto, Waka, Itsuki and Yuzuha. There are other unlockable characters, and one DLC character (from the anime “Steins’ Gate”), but those can only be used in co-op/Arcade mode, not in the main story, which appears to be one player only and locked to the original four.

This game brought back a lot of really fond memories for me, whether intentional or not. It feels like a Super-Deformed “River City Ransom” meets “Scott Pilgrim vs. The World.” You have character levels, upgrades, tons of weird, wacky enemies representing peculiar tropes, and hours of fun for a solo adventure or as a group event. Though I received quite a bit of lag when I hooked my capture card up to stream it for an evening of “Bottom Tier Live,” I was happy with the game overall. It’s not trying to break the mold of the current gen games, but rather give us a pleasant trek back through time while utilizing a series that does not really get a lot of airtime. 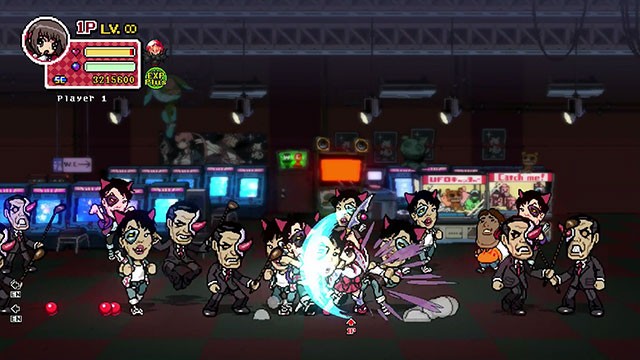 The unique take on 2D adds tactics to the mania.

Phantom Breaker is a mostly 2D side-scrolling beat ‘em up, but the difference lies in its take on the 2.5D elements. Unlike the traditionally movement in four directions, like classic arcade games (X-Men, Captain America and the Avengers, et al) you instead move left and right with two different lanes that you can jump up and down between. If you hit a button, you leap into the background, where other enemies will still come on screen. Your enemies will come in massive numbers, and they can jump back and forth at will also. When you are in the background, they appear as a sort of shadow or outline in the foreground, so you can still easily see everything going on in your part of the world.

The enemies aren’t named that I saw, but they represent a variety of tropes in Japanese culture. The dark-skinned women, or Ganguro, where girls get excessively dark tans and contrasting make up to go with it, and tend to dye their hair a blonde/lighter shade. There are also the Cho Aniki style men (or Super Big Brother), muscular men in speedos, flexing and posing in a suggestive manner. In this style of game, this is not suggestive at all, and is instead pretty humorous. Also of note are the salarymen, Japanese men in suits carrying golf clubs, many outfitted with robotic implants; this could be an implication that they are all drones or robots, but there’s no time to consider that while they’re trying to kill you! 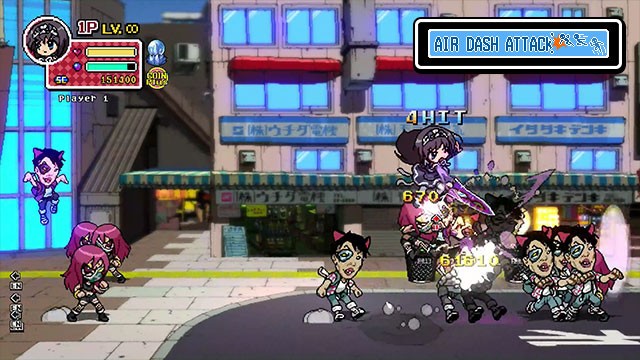 The baddie sprites are overused a lot, but each one is a work of art (and satire).

The first stage gets you prepared for the game, where you have max stats and all powers and upgrades, until you trounce the first boss. This is a good way to get to learn the title and then suddenly be thrown into the thick of it, among wave after wave of ludicrous enemies (like the gigantic elderly muscular peeping tom, who tries to punch you silly with his arm that takes up half the screen in girth). There are also alternate routes to unlock, which are not really mentioned. I learned of them in co-op mode when I saw that I completed a stage, but only had 55% unlocked. Though if you do find yourself on an alternate path it will be quite noticeable, as the time of day will have drastically changed. Elevators, shrine mazes, and shopping malls… each area represents another part of Tokyo, and players will have fun exploring the world of Phantom Breaker.

There are a few game modes worth mentioning. The Story Mode is one player, and pits your chosen character against the forces of Phantom, as you gain your powers back, fight through humongous hordes of enemies, and travel Tokyo’s various districts to reach your final goal. Arcade Mode is more about setting and breaking goals, from combos, completion time and highest score. Co-op runs you through stages of the game, where you pick the difficulty and can go online or play locally with up to four other players. Completing the game on Normal/Hard/Nightmare will unlock extra characters to play co-op in, consisting of the other bosses of the game which will be pretty interesting. Not to mention fast-paced PVP action, if that’s your cup of tea. 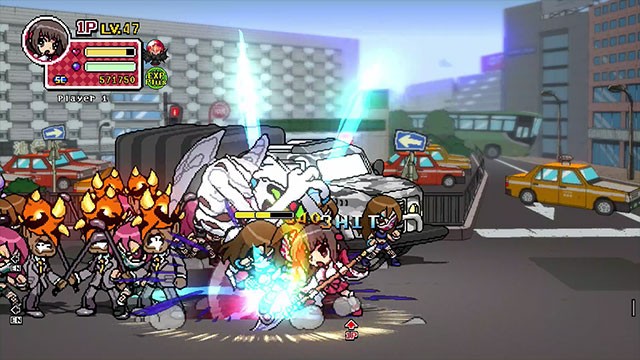 Despite its cutesy looks, this game's difficult can bite you in the ass if you're not careful.

Take this game for what it is: A fun multiplayer game to hang out with the guys and gals and beat the crap out of hordes of monsters in an adorable setting. It’s not filled with blood, violence, sex, and all the things that make for controversy. It’s just good, clean, cute fun. The music is catchy, the game modes are fun, and while the skill trees are pretty much the same, the characters still play differently and each one has their merits, none being more ridiculous than the other. Though I won’t lie, Yuzuha, the ninja really did it for me. Cool teleports and knockbacks, kunai daggers and a high attack speed combined for a lot of fun.

Graphics aren’t stellar, but they are in a particular design, and it fits this game. The enemies all kind of run together and the screen can feel quite cluttered and hard to see your character among the endless enemies, but it still looks very good. The sprite/16 bit style graphics are in no way a detractor.

I have to say the controls were simple but very responsive. Not to mention you can pick from d-pad, stick, or both (in the event you are passing the controller, or just want to change it up). You have light, med, heavy attack, special, and a button to utilize your special skills, and a button to jump between screens. It works just the way it’s intended.

There are a few good solid game modes, and even on day one I was finding people online to play network with. The only real downside I found was, as I said earlier, that streaming not using the PS4 Twitch caused horrendous lag on my stream. Other than that, the gameplay was a blast, and the non-stop combat definitely made me feel like I was in an arcade in the 80s again.

Music had a very “Anamanaguchi” feel, the chiptune/anime style music was suitable for this game. I didn’t feel like it droned and made me want to turn down the volume as a lot of other titles have made me want to do in the past. It was a good beat to keep up with the pace of the game. 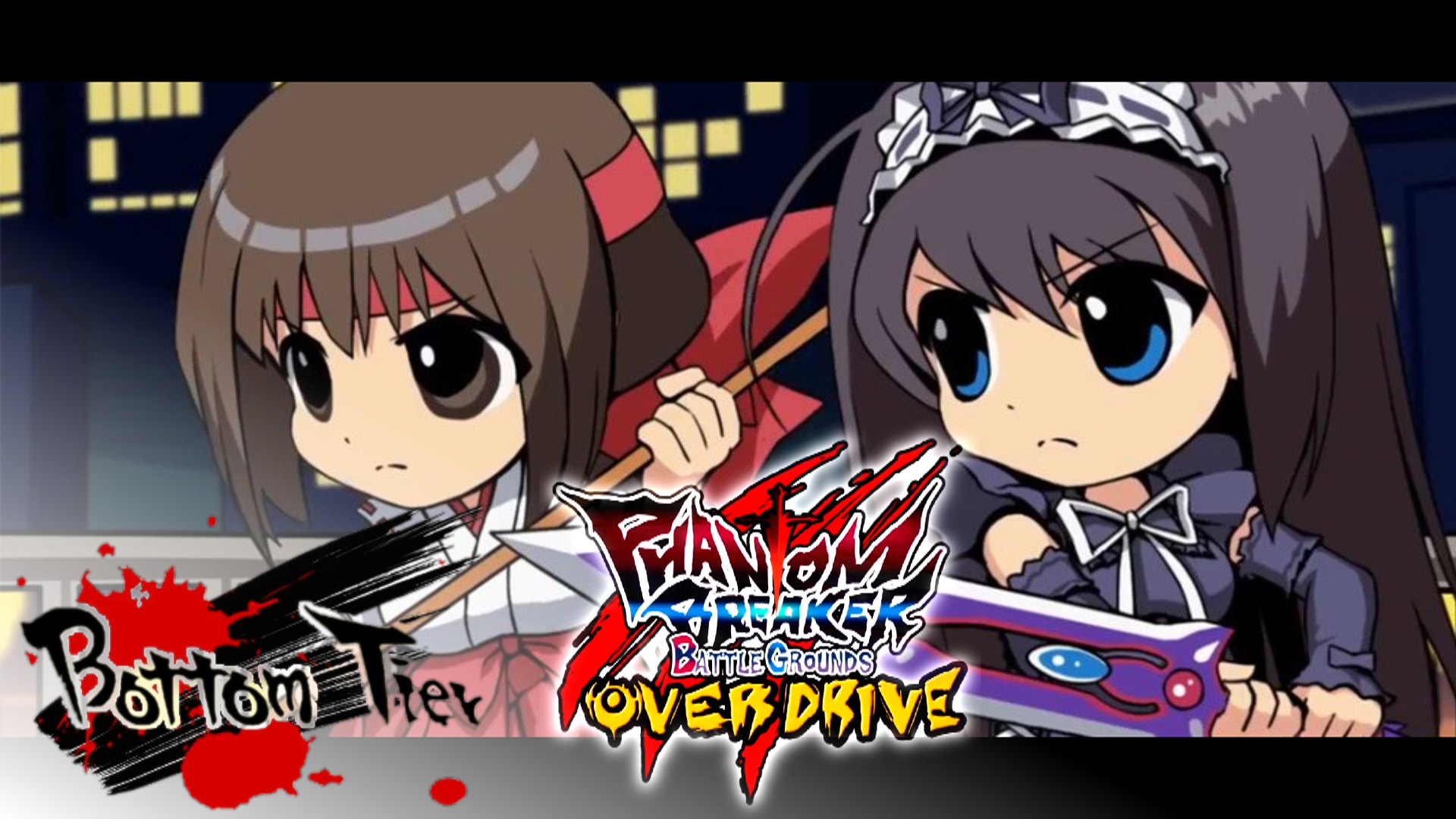