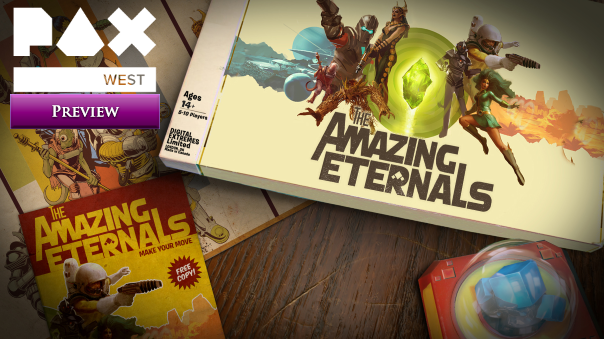 Alongside Warframe and the newly announced Survived By, the Digital Extremes booth at PAX West offered a chance to get more familiar with The Amazing Eternals (formerly Keystone). A card-based hero shooter with a 70’s retro-pulp aesthetic, TAE will have quite a bit to prove in a market that’s currently trending hero shooters including Paragon, Overwatch, and Paladins. And yet after seeing a private demo, I have a good feeling that The Amazing Eternals will find its own place without falling into the “clone” trap.

The team spins a fantasy for me: what happens if as a kid, you go into the basement of your parent’s house and you find all your parents’s old board games collecting dust – but instead of finding Jumanji, you find “The Amazing Eternals,” a game that has a strange glowing piece to it. When you go to play the game, it sucks you into the board itself and brings you to a new dimension where you battle as one of the Eternals, gathering keystone energy and bring it back to the board to progress.  The board game does play a key role in The Amazing Eternals: it serves as a measure of meta progress, and each time you go forward a space on the board, you unlock something new, from packs of cards to new characters to game pieces to place on your board.

The Amazing Eternals has just launched closed beta with six characters currently playable while the team gathers feedback from testers. These include Winter, an assault character with a Doctor Who “Cyberman” feel, and Bristle, a tank that draws inspiration from sci-fi horror films like The Swamp Thing. Each character is designed to pull on one of these themes from an earlier entertainment era, while designed to feel vibrant and modern.

Central to the gameplay is the card system. Unlike Paragon and Paladins, where cards play a more passive role in stat boosting, the cards in The Amazing Eternals take the place of skills. To avoid the RNG element of card games, decks are built by the player in a static order, meaning cards will appear in the exact order the player assigns them. There is also no power cap on decks: players are free to load decks with whatever cards they want. However, cooldowns on activating these cards increase with rarity, and with short matches (the current mode in testing is on a 15 minute timer), a player is unlikely to activate all of their most powerful cards during the match. In short, you can go heavy if you choose, but a balanced deck will be more useful. 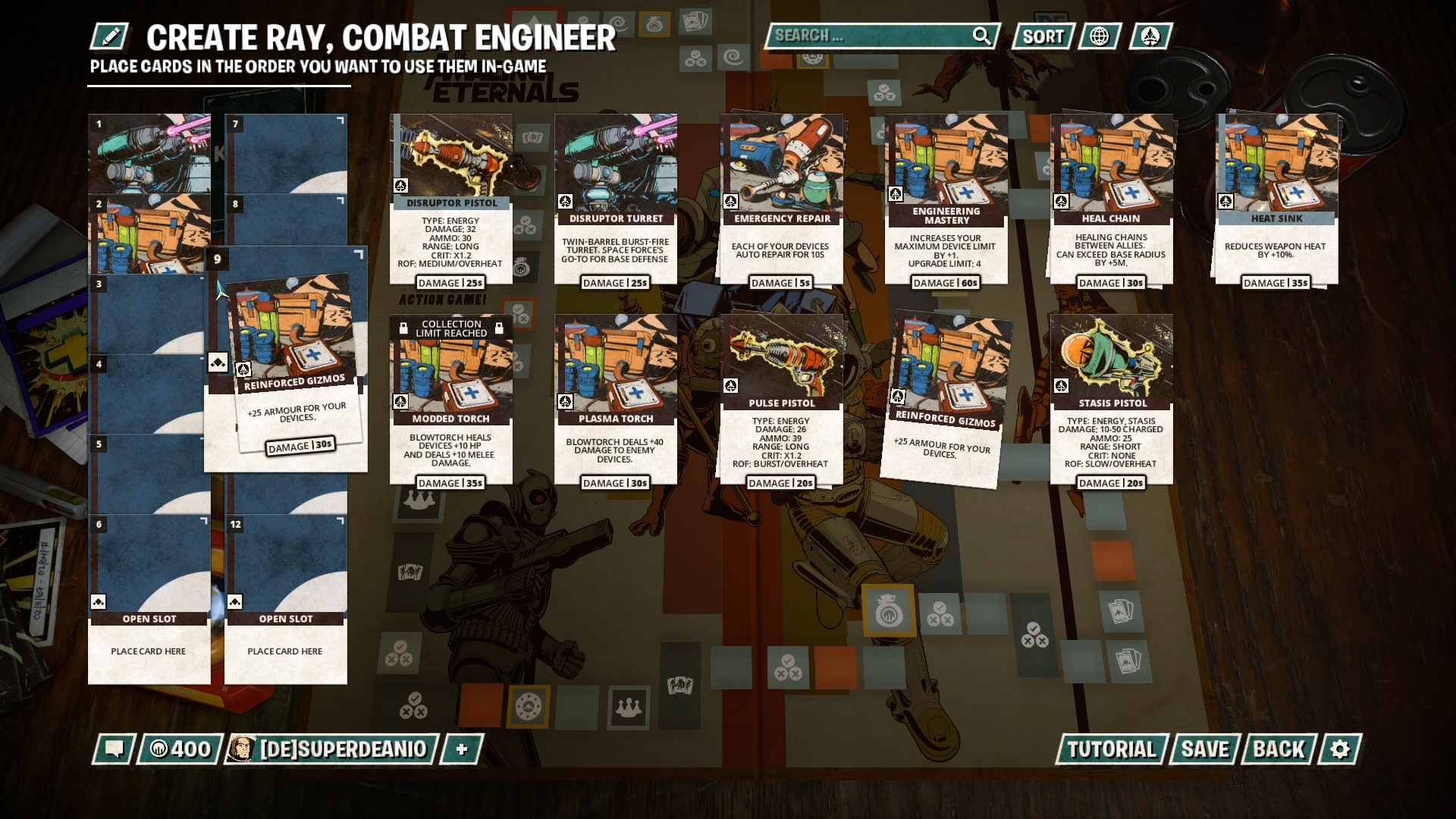 The design team feels that one of the core engagements in card games is the release of new cards and card expansions, constantly changing and evolving the game’s meta. So they’ve set out with an ambitious goal to release new content every week, often in the form of cards. If Digital Extremes can deliver on that goal, The Amazing Eternals will have both a casual and competitive scene that’s never stale.

Cards come in three core varieties: power-ups, weapons, and upgrades. Upgrade cards have a slower draw time, but power up your character for the rest of the match. Power-ups are more temporary, but still important as the maps have no power-ups to grab – what you bring is what you get, but you hold control of when you use it. Weapons are as they are described – cards that grant new weapons the character can use, including melee and ranged weapons with limited ammo. Weapons can also be swapped out, if you choose to draw one but don’t want to waste the ammo immediately. 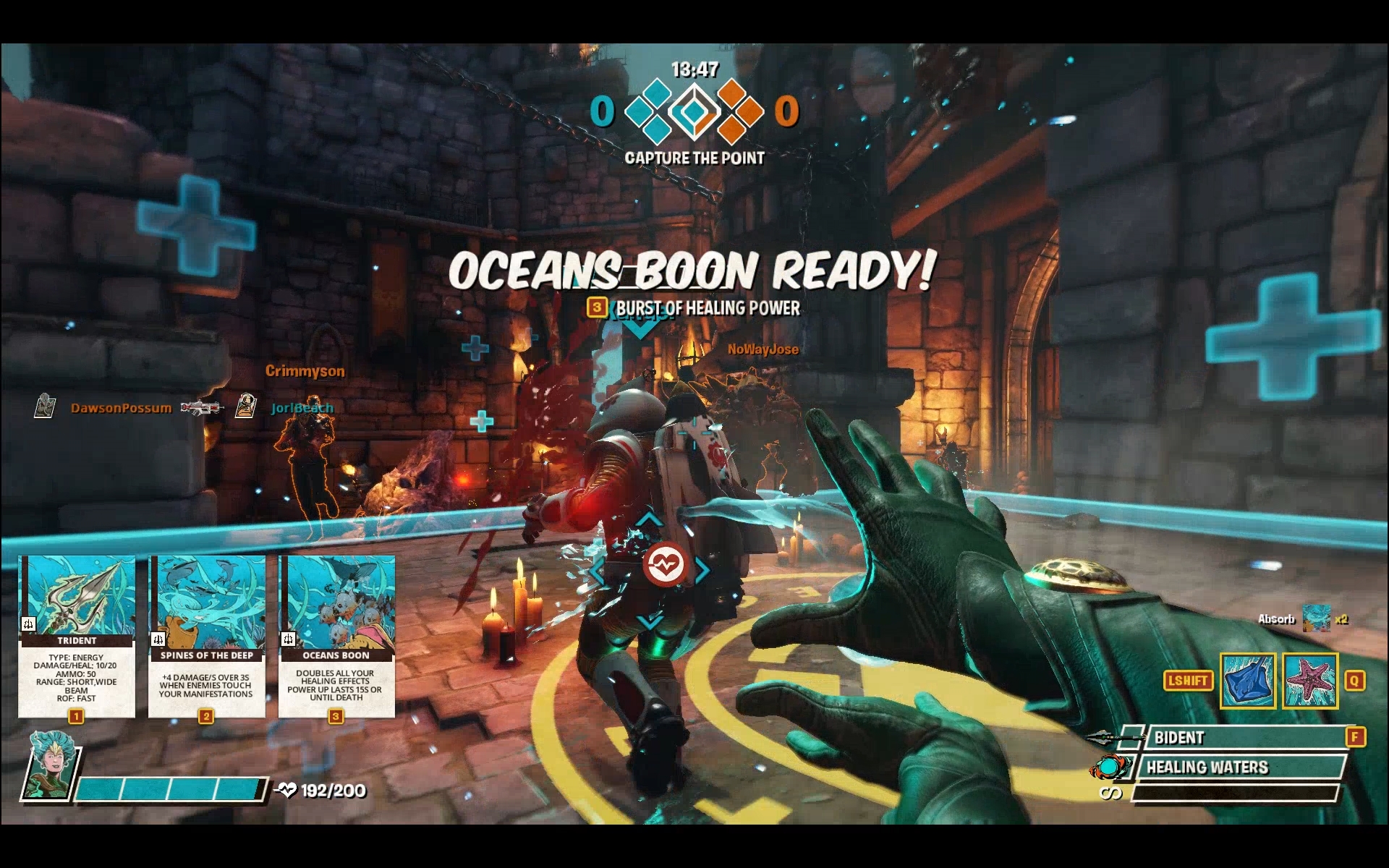 Nautica Healing During a Match

Another power limit of the card system is that there can only be three cards queued at any time. When the match begins, the first three deck cards will drop in one by one on a timer. After that, cards will be replaced as they are used. This adds another active layer of strategy to the game: you must not only be familiar with the way you built your deck, and what your cards are best used for, but also have foresight to know what you may want to clear from your ‘hand’ to make way for a card later in the deck. After all, if you load your three most powerful cards first, you may not get a chance to use the rest of your deck before match ends.

Overall, if you’ve not yet found the hero shooter that suits your needs, if you like card games or strategic shooters, The Amazing Eternals is a promising title to keep an eye on as it progresses through beta. You can sign up for beta any time here, and for a limited time, we’re also giving away beta keys!