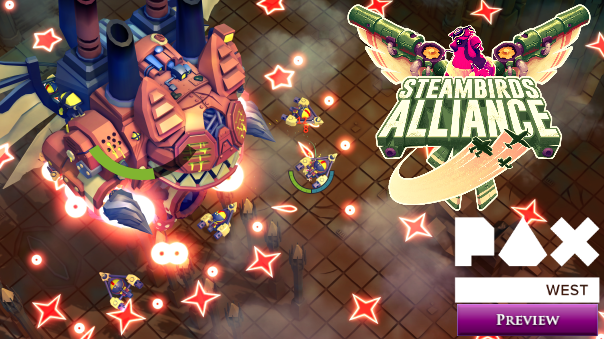 The “bullet hell” has been generally untapped for its multiplayer potential outside of the arcades. Until recently, shoot ’em ups were relegated to single player or local multiplayer. In recent years – particularly after the success of Realm of the Mad God – developers have been turning an eye to the opportunity the game genre presents. At PAX West, I saw two such games. The first, Survived By, sticks truer to the fantasy and dungeon delving tropes common in MMORPGs. But the second, Steambirds Alliance, sticks to the original bullet hell theme of battling in the skies in airplanes.

Steambirds Alliance is an isometric co-op shoot ’em up developed by Spryfox Games, co-developer of Realm of the Mad God. They also have produced Steambirds and Steambirds Survival, two iOS games featuring aircraft battles. Steambirds Alliance makes the third entrance in the Steambirds series, but no familiarity with the previous games is necessary as this is a game focused on co-op action and roguelite progression.

Players take control of an aircraft, typically an airplane although other vehicles like helicopters are also available. Starting out, players have access to only one basic bi-plane. Like other roguelites, destruction of your aircraft means a “game over,” at which point you can select a new aircraft to re-enter the game. Over time and as players gain experience, new ship types are unlocked – 11 basic ship types, each with three variations. Each ship type has its own unique style of play, ranging from mobile assault craft to support planes that can repair ally health.  For my part, I was able to unlock a helicopter whose primary selling point was the ability to hover – most planes must constantly move forward. For the two aircrafts I piloted, I was able to use a basic forward attack, a poison bomb gas attack, and a rolling dodge.

The controls are generally straightforward on a controller, although movement – particularly dodging – takes some getting used to. Apparently Spryfox is experimenting with new control schemes (according to their last developer livestream), and remain undecided on which options to offer players – traditional left-right steering or “lean” controls. The controls are otherwise responsive, however, and mastering movement will reward players with better skill.

Gameplay itself takes place primarily in open world zones which can support up to 40 players. You can see other players’s location radars along the outside of the screen and can even ‘hop’ to them to get straight into the group action. The radar also displays ‘missions,’ open world targets that reward players for completing them with bonus experience. There is no kill stealing or loot stealing, so players are immediately encouraged to work together to take out difficult bosses and unlock new areas. As enemies are defeated, they drop items that include higher level armor and weapons. These items can also be dropped, allowing other players to pick them up for use. This is great foresight and a quick way for players who have higher level craft give boosted equipment to lower level players who are getting in on the action.

Steambirds Alliance has been in development for four years, and has a remarkable amount of polish for a game still in testing. While testing is ongoing, you can add the game now on your Steam Wishlist, or sign-up for upcoming beta testing on their official website.