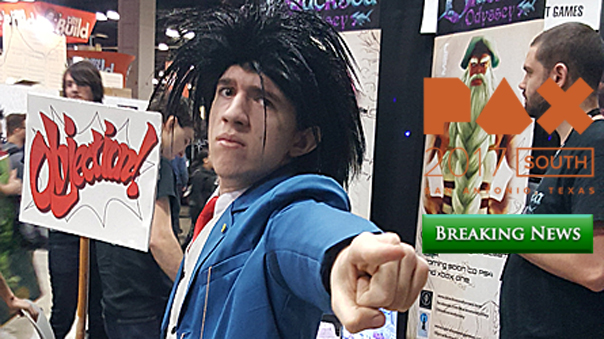 As my time in San Antonio draws to a close, I have to feel incredibly fortunate to be here. It was my first South and I had good people to work with, as well as familiar developers and new ones to meet, with whom I got to share ideas that could make their game grow in new and exciting ways. It felt great to have my ideas be accepted or at least considered, because every now and again, I have a solid one. There were fewer people there on Sunday, I suspect because many were getting ready for the Royal Rumble, or had partied too hard [not naming names…] but I got a chance to primarily visit the indie booths today. This focus will be on the last of the biggest work I got to look at! But stay tuned for an indie write up as well, because I saw a lot of stuff that doesn’t necessarily meet our websites’ style, but will definitely be worth keeping an eye on.

We had the chance to sit down and talk to Playerunknown himself, one of the brilliant minds behind Arma 2 and Arma 3! We mostly talked about inspiration and about Battlegrounds itself, less what is to come. He was tight-lipped on dates and modes, but that’s okay; it’s still got quite a ways to go, and nobody wants unkept promises! The Battle Royale is the current mode, and you can do just about anything in it! It’s fast-paced, it’s ridiculous, and it’s fun.

That’s the most important thing in a free-for-all.  I mean, this is a game where you can come running out of an alley, brandishing a frying pan! A bloody frying pan! It’s got vehicles, silly and effective weapons, and it’s really grown from when I first tried it, and was locked in an infinite loop in the starting zone! The character customization has really grown too. Playerunknown’s goal is for this game to foster creativity, to help other people find their own goal, their own vision of a game. That’s how much customization plays into the overall philosophy, and how open this title’s going to be. He’s one of the coolest developers I’ve had the pleasure to meet, and his philosophy on creating a fun and competitive environment strikes me where it counts.

There are lots of fun things to look out for in Eternal, such as new cards and more content as the game grows, but I want to really talk about the biggest thing that strikes closest to home. The beta for Eternal is going to come to Mobile! But not just mobile… Android.  Most of the time, games come to Apple first, because it’s just easier to develop for Apple. All phones use the same hardware/software and require a lot less hassle. But Android phones are pretty much all different.  But Apple has a “no beta” policy or somesuch nonsense, so they can’t go there.

With that in mind, they want to take the game on the road, but cannot with Apple. So I can finally beta test a game on mobile! It’s a wonderful feeling! The card game is already amazing and is less restricting in what you can do [Not bound to a character class, archetype, or one faction is wonderful. 5 color decks, I’m coming for you!], and they’re really good about listening to what their audience is in the mood for. It’s still growing day after day, and I think having it on mobile, while I’m not always wild about mobile card games, is the right step to increasing awareness of their game. I’m 100% for that. Eternal’s going to be a smash in the card game scene. Sure, it visually can feel like Hearthstone, but they set the standard for what a card game should be.

We’re going to end with a game that’s… Not an MMO, not an online multiplayer, but hot damn, it could be a hit on Twitch! Doublekick Heroes is a unique rhythm game with a very retro, pixel style artwork.  You have a band in a very sweet car, which is being chased down by zombies.  And the music is sick, and hitting the buttons at the right time fires bullets that will kill those zombies.  It starts off easy with just two buttons, but very quickly ramps up with more and more challenge. And you can use anything to play! I used a HORI RAF Pro 4 – the stick I use at home for SF5! You can use a Guitar Hero/Rock band control, whatever you’d want. It gets better though!

There is a great story mode where you travel the land, slaughtering evil, listening to sick metal tracks… but you can use your own music! You can apply your own music to the game, and it’ll create a track to endure! Why is this so great? Other than the idea of playing a metal game with Blind Guardian or something, but what I suggested, and I hope they do, is add Twitch Integration to let your stream audience decide your fate! There are so many options, choices, and situations that could just be absolutely ball-breaking insane! I feel like it belongs on Twitch for chaotic streaming interaction. So that makes it an online, multiplayer game since the audience will be participating. It’s easily one of my favorite things I’ve seen in the Pax circuit. Do keep your eyes on Doublekick Heroes.

Be sure to check out my final article tomorrow focusing on the indie games at PAX South 2017, as well as a slew of cosplay shots from all three days!