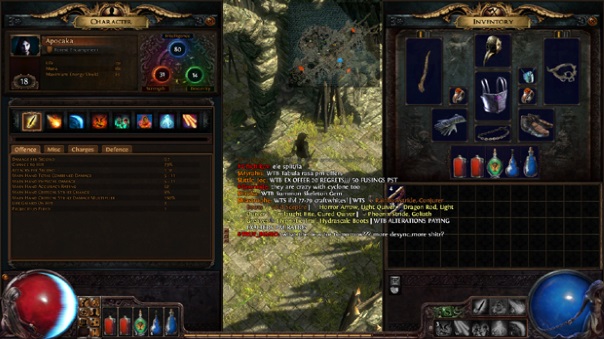 Path of Exile is an Action RPG brought to us by Grinding Gear Games. It offers a style of gameplay made popular by the Diablo series of games, but with quite a few twist to make their take on the genre quite unique. With its massive talent trees, immersive world, and fantastic gameplay, it’s easy to realize just why it has such a big following. And for those that like to have a challenge or are competitive, there is hardcore mode and plenty of race leagues for you to take part in. Now that the game is ready for its official launch, it’s time we take a closer look at the game with a more critical eye.

Path of Exile has a lot of customization when it comes to your characters stats, abilities, and skills. From its item socketing to the massive skill/talent tree, there’s a lot of choices for you to make. Character creation is pretty simple, with you choosing from one of seven classes, ranging from melee to spell casters. You don’t get any say in how your character looks, and are thrown straight into the game as soon as you pick your class. You can customize your looks to an extent, as what armor or weapon you are using shows on your character in the game. There are cosmetic skins and pets that can be bought in the micro-transaction shop to make yourself stand out a bit more, though the elusive kiwi birds are now a relic from long ago. 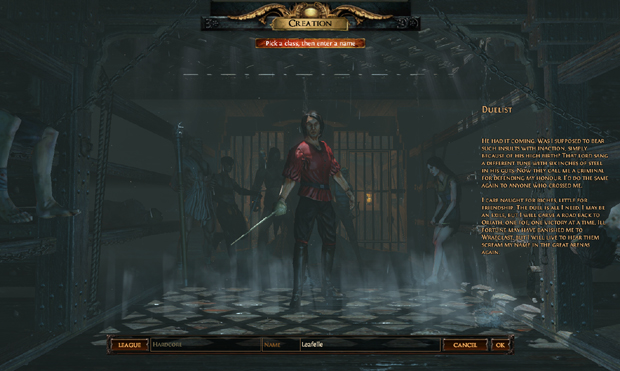 The massive talent tree is both beautiful and overwhelming to look at. I’ve spent a lot of time just exploring the tree – or should I say forest – trying to find the best path for my character to take. Everything on the tree is passive, as all abilities are gained via skill gems, which gain exp from use and level up to increase their effectiveness. Each item has a set of sockets of differing colors which you can put gems into, granting your character abilities or special effects such as lifesteal or shielding for your HP. A lot of the fun to be gained from Path of Exile is from trying to build the best character possible by using a combination of the talent tree, items, and gems.

Path of Exile is a surprisingly beautiful game. It’s not the highest quality, but the developers have done a great job creating an incredibly atmospheric game that you can’t help but be immersed in. The art style chosen truly fits with the story, giving you a sense of the harsh reality one would feel being abandoned on an island of horrific creatures and cut throat politics. It all blends together quite well when viewed from the isometric perspective the game is played in too. I can’t say anything negative about the graphics as the love and care that the Grinding Gear art team put into their work is immediately apparent.

The UI in Path of Exile is something I would expect to see in a game from the early 90’s. It gives a retro feeling that actually fits well with the game. There are a few odd things with the UI that I didn’t like much, however. For example, when opening a window, the resolution of the “play” area is changed, giving a squished effect that I can’t really see a point to. Opening a window and suddenly finding that the “center” of the screen has been changed can be a bit confusing at first.

Path of Exile uses a combination of mouse and keyboard controls. The mouse is used for movement (by holding or clicking the right mouse button) and basic attacks, as well as picking up items dropped by fallen enemies. The keyboard is used to activate abilities and consume potions. I found myself picking up on the controls almost immediately, as they are easy to get used to because they made sense. Everything was smooth, as well. I didn’t notice anything negative concerning the controls.

I generally find the community in most games (or the Internet in general) to be quite vile. Path of Exile seems to have a bit of a mixed community. There are a lot of “bad apples” around, but there are a lot of nice and helpful people. While viewing the games global chat, it seemed as though a majority of what goes on is trading and trash talking. However, a visit to the forum allows you to get a better idea of the community, and where you can become exposed to the better parts of it. 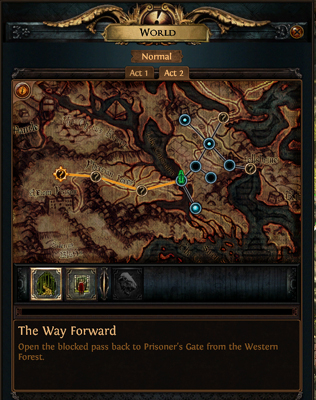 There’s also a large competitive side to the community. Participating in the many racing leagues is the best way to show off your knowledge of the game. Due to Path of Exile’s large community (that is continuing to grow), there will be no shortage of competitors in the near future. Races are plentiful and diverse so players should find something that appeals to them. The random nature of maps add bonus challenge as players will have to memorize and learn tons of varieties and how to identify them in order to ensure the best time trial runs for races. Beyond just theming, you can find varying time limits, restrictions, and winning conditions tagged on to change up basic formulas on these challenges. If you’re a competitive person, you’ll feel right at home in this part of the community.

The gameplay in Path of Exile is pretty simple once you get used to it, but is hard to master. If you’ve ever played an action RPG before, you’ll be used to the setup. It’s essentially a mission running game, where you have hub towns that everyone visits to get quests, trade items, stash their loot, and all that other good stuff. Each hub town is surrounded with adventuring areas that are instanced on a solo or group basis. You won’t be running into a random person while you’re out questing, so you don’t have to worry about some guy you don’t know taking your loot.

Similar to Diablo, the game takes part in a series of “Acts”, which are basically major turning points in the on-going story in the game. Most missions/quests can be completed in a variety of difficulties. Enemies you kill will drop loot, and there are chests to open and barrels to break as well. A big part of the game is collecting loot, so if you find yourself to be a loot hoarder, you’ll fit right in. I was quite pleased with how well done the narrative of the game is, and how deep the story can go.

Combat, at first, is really fun and looks spectacular. However, I found my wrist starting to hurt after a while due to how repetitive it can be. In the later levels of the game, it seems like a lot of your tactics will revolve around one or two moves while spamming flasks for HP and mana regeneration. This, added with the fact that you’ll probably find yourself repeating a lot of the same content, can give the game an over-all repetitive feeling after you’ve played for a couple of weeks. But it’ll be a fun couple of weeks, at the least. And for those that enjoy the gameplay, there’s a thriving community for you to be a part of.

Flasks in Path of Exile are a neat concept. Rather than having to stock-up on potions each time you go to town, your flasks will automatically regenerate over time. Flasks range from HP regen, to mana regen, to speed boost. The usual tactic is to have a few HP, a few mana, and one speed boost available. In the harder maps, you’ll find yourself relying on your flasks constantly, so finding great flasks is important. You’re limited to how many total flasks you can bring and various upgrades exist as loot when you progress, offering a new progression system not often utilized in the MMO sphere. 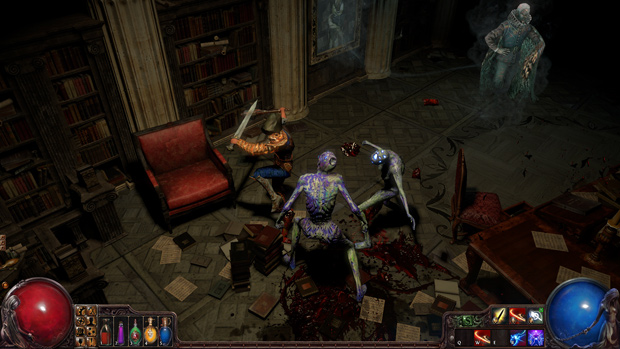 I liked the item socketing system a great deal. Trying to find the perfect gear, with the correct sockets for the gems you want, was a large part of the driving force behind my enjoyment of the game. I’m not sure if everyone will feel the same, but I know a lot of people do. It’s evident that the system works well based on how popular the game is becoming. It’s nice that you don’t have to worry about spending precious skill points and ruining your character, either. If you don’t like the skills you have, simply take out the gems and replace them with something else.

End Game will consist of two things. Races (often referred to as Leagues) and maps. Races, as the name suggests, are when you race against other players and the goal is to reach the highest level possible within a set time limit to win prizes. Maps, on the other-hand, are special items that come in varying rarities. Using a map will, as the name suggest, gain you access to a special map that will allow you to gain access to the best items in the game. The challenge of races and the randomness of maps are what keep most people hooked on Path of Exile for an extended period of time, but at the same time they’re what make some people feel the game gets too repetitive.

Path of Exile has turned out to be quite an amazing experience. A phenomenon in its own right. It has a rapidly growing community, many of whom feel that the game provides what Diablo 3 should have. With its many unique features, it brings something fun and new to the Action RPG genre that we can all appreciate. The game seems to have something for everyone – the competitive players, the casual gamers, the loot hoarders… If you like to game, you will probably find something you like in Path of Exile and that’s what makes it such a fantastic game to play, in my opinion. I would highly suggest you try this game out and take part in the fun while it’s still a big deal and in the early stages of its life.