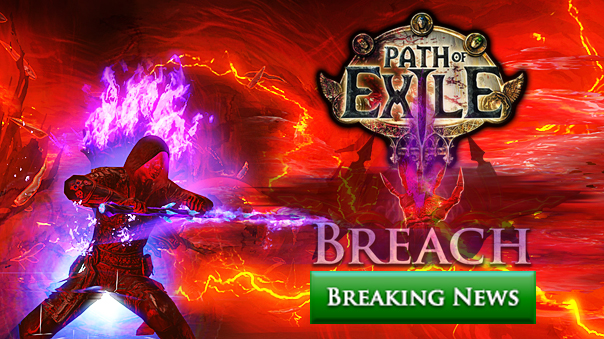 December is always a key time in the world of online gaming. Players are won and lost in the frosty winter months when gamers are stuck inside with no school and no where to go. Grinding Gear Games are no spring chickens in the big hitter league of online games, and know this. So with December half a month away, it was no surprise that they reached out to us to share something rather special. Right on schedule, Path of Exile’s mid-expansion season special league patch is on its way. But the Breach Challenger League is no simple event. This feels more a culmination of everything tested and implemented into game over the past few years. Shall we?

Let’s just right into the gimmick of this year’s Path of Exile Challenger League. For those unfamiliar, Leagues are essentially competitive servers with special rules or strange gimmicks that Path of Exile throws at its playerbase from time to time to test new concepts outside of the core game, while giving its best players a strange new environment and economy to min-max wild new character builds.

The Breach League introduces the concept of a hidden world all around you in Wraeclast. Not unlike some past leagues, Breaches offer intense time trial challenges where you gain limited accessible to this unseen world. Prepare to get rushed by the elemental denizens of these awful Breaches, focused around lightning, fire, cold, physical, and chaos. Now while elemental themes and time trials are nothing new for veteran Path of Exile players, the presentation of this league combined with brand new creatures combines for something rather intense.

See last time Path of Exile ran one of these time trial leagues, there was no real break to the slaughter. You had to go go go until you burnt yourself out in a slaughter that had no end. It was exhausting. The Breach League limits these Breach events to roughly once every ten to fifteen minutes, and you never truly know which Breach you’re going to get. By breaking it up, and keeping it rather random, the League will remain fun for longer while not being a backbreaking constant grind that only the truly hardcore would be interested in.

Once a Breach begins though, all bets are off. If you do poorly, the Breach will collapse on yourself in just thirty seconds. Believe me you will feel disappointed when this happens, as your rewards are going to be minimal. If you plan your tactics and have a bit of luck on your side though, the Breach will continue to expand larger and larger for around a full minute, with wild new powerful creatures rushing to put an end to your rampage. That’s where the decent rewards are to be had. If it was a physical or chaos breach, the rewards will be even better (of course these are far rarer encounters than the three elemental breaches)

But every once in a great while you may run into a monster that stands out from the rest of the breach. There’s five Breach lords, on representing each breach type, that are there to punish lackadaisical players that wish to mindlessly run through the Breach League. You can bet it’s going to take some skill and serious potion spam to stand thirty seconds with a Breach Lord by yourself. But if you do and can manage to take the fight back to the Breach Lord, you might be lucky enough to get a full Breach duration against these monstrosities for massive rewards.

Of course these showdowns are just a teaser of the real ultimate goal of the Breach League. Among other gear goodies dropped by Breaches, you will obtain Splinters related to the five elements. These will be highly valued by the players going for the ultimate items of the league, as one hundred splinters of the same element will get you a Breachstone. Akin to the end-game maps of the core game, Breachstone’s open up portals to Uul-Netol’s Domain: Wide open massive maps in which you invade the worlds of the Breaches yourself.

Should you survive the gauntlet of the Breach long enough to find the exit, you will earn yourself a one way ticket to a no time limit no bars held battle with the Breach Lord himself! From the couple of Breach Lords I had the pleasure to witness, I can say these bastards bring a bullet-hell unlike anything I’ve seen in the game before. While the damage seemed forgiving enough on the GM characters, I wonder just how brutal these battles are balanced to be against a standard player rushing through the League?

Should you strategize, build yourself, and dance through the gauntlet of a Breach Lord, three unique items (armor, amulet, and weapon) await as potential rewards for each elemental lord. The gimmick for this league’s unique items is that they offer truly odd options for new character build ideas. One example that exemplified the point was the Formless Flame Siege Helmet, a powerful unique helmet with the following add-on:

In plain English, the Flame Siege Helmet gives you the option of stacking any fire resistance gear you come across far beyond the standard Path of Exile cap to gain crazy armor and fire resistance. On top of this, the helmet had an inherent -10 damage from fire damage added on top of it, meaning you’re going to be beyond 100% fire resistance in effect.

Now the more casual players are probably sad thinking of the amazing rares the league leaders are going to be hording. Well once again luck may play a big part in affairs, as these uniques have a chance of dropping from any monster or chest in their respective elemental breach. That said, there of course is a huge incentive beyond praying to RNGesus for all the work required to reach and defeat the Breach Lords. Breachlords have a chance of dropping their Blessing, which can be combined with these Breach uniques to create a new more powerful version of them. 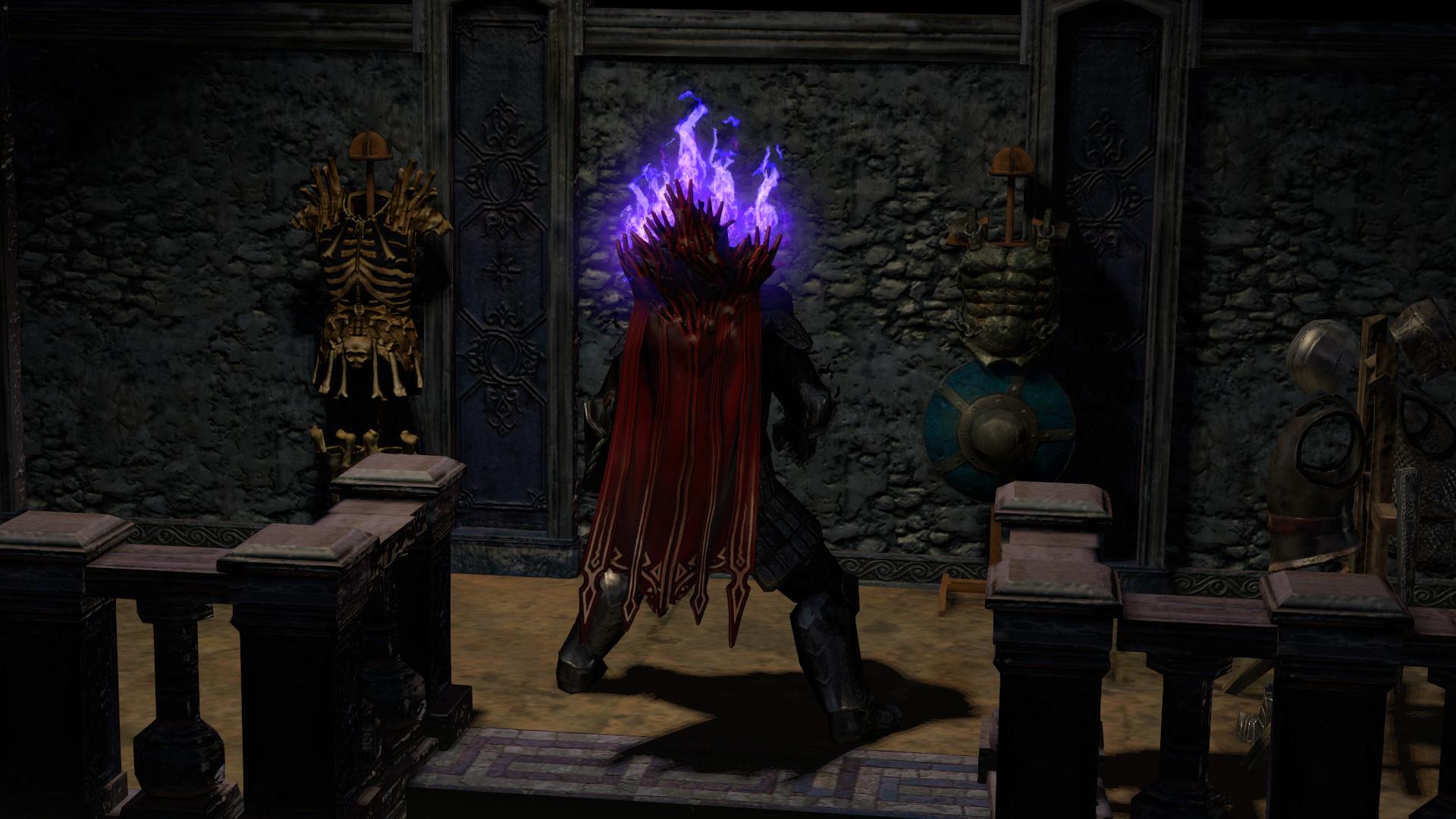 The Cash Shop Has Been Breached

Tired of all the cool stuff other players have from the super pricey supporter packs in Path of Exile? Wish you could earn some of those sweet goodies? Or at least not have to pay over $100 for them? Seems Grinding Gear has heard you loud and clear, as they’re offering both cheaper support packs and ways to grind your way to some demonic cash shop items!

Both the standard and hardcore version of the Breach league will offer forty challenges for players to tackle during its three month duration. Below you can check out the rewards up for grabs for doing so:

And if you are one of the players that buy into support packs, you’ll be glad to know that not only are update 2.5.0 packs the cheapest ever, but they have capes. Yes you can finally get capes. And not just any capes. Some Russian guy who cares more about wind and fabric physics than nearly any sane person on Earth was brought in to get the realism on these capes so crisp, Batman would be jealous. In addition to the cloaks, the packs also have a portal effect, weapon effect, social portrait frames, supporter titles and a big pile of points. Plus you don’t even have to wait till the Breach league goes live to check them out. They’re up for grabs by the time embargo lifts on this article!

So if you’ve never touched Path of Exile and think all this League nonsense is too much to take in for a new player, that doesn’t mean this upcoming patch isn’t the best time ever to jump into game. Over the past year, Grinding Gear has been putting in serious work in the optimization department of their game, and as of update 2.5.0, one of the biggest milestones yet will be reached. The entire game client is being overhauled to a DX11 64 bit version that will make the game look and feel smoother than ever before.

This will compliment nicely with the new player experience being overhauled. The starter zone of Wraeclast is, obviously, looking pretty dated compared to the spectacular recent end-game zones added to Path of Exile. I mean they were quite a small indie team back then compared to now. So at long last the team got the greenlight to rebuild the starter zone to match the overall quality of the rest of the game.

Beyond that, the Forsaken Master system is going to be a lot less clunky than initially implemented. After listening to player feedback, Grinding Gear feels they finally have all the cogs in place to introduce a new and improved version of the system. All this plus of course there will be some nifty new goodies to discover like extra bonus uniques, golem jewels, and new support gems. But if you’re a hardcore enough player to know and care about these things, you are probably already beta testing this update!

While not a full on expansion, the 2.5.0 Breach League update is no small potatoes update. And best of all, you won’t have to wait till winter break to get your hands on it. All this lands in Path of Exile on Friday, December 2nd!