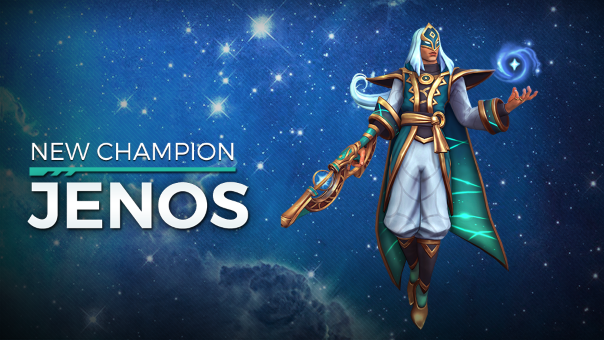 There are some folks that say “Jenos is underwhelming”. These people are wrong and do not know what they’re talking about. He has a 2k+ heal on a potential six-second cooldown, and that’s before Chronos is factored in. That’s amazing. And it can be applied through buildings, walls, and other obstructions. As long as they’re in range, he can apply it to them, and you can tell because of the cool, glowy space crown they now sport. Physically, he reminds me of a spellcasting, magical Char Aznable from Mobile Suit Gundam, with his cool mask and cold demeanor. Is he perfect? Absolutely not. Is he probably the next support I’m going to try and master for Paladins? You bet he is! Between him and Artio, I’m going to be a very busy man over the next couple of weeks. But he is Jenos, the Ascended. He has come from the stars themselves to deliver judgment and pain. But mostly judgment. He might actually feel more powerful to me than Seris, due to the flexibility on his heal. Seris will keep going if they lose vision, but Jenos doesn’t need it to start with. 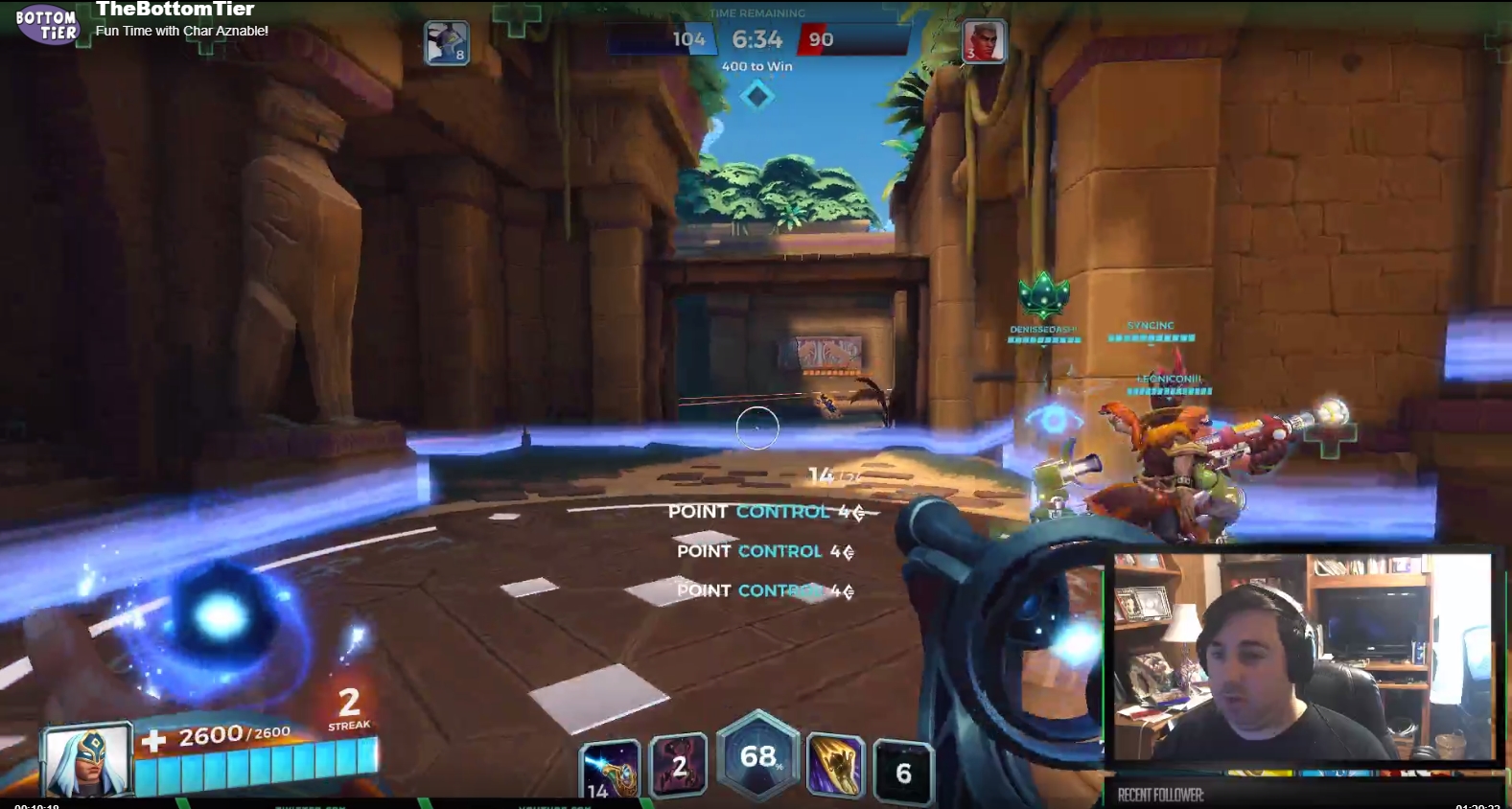 His attack is fast base, he has a weird, awkward speed-up/space-jump move, a Force Choke a’la Darth Vader, and he politely borrowed Lux’s superlaser. It’s a little on the slow side, and you can see it coming since it has a visible presence on the map when it’s coming. So it’s not like it’s hard to get away. But you can fire it through buildings and such, so … there’s definitely that. I’m not so sure how I feel about the current Paladins “casual” meta though because it’s so hard to figure out. It seems like it waffles between 1 Healer + 2 Tanks, or 2 Healers + 1 Tank. I do like pairing Jenos with another healer though; someone like Seris or Ying. Someone who can also do decent damage, and also can wombo some ults together. Seris plops their whole team down and then Jenos hurls his ultimate and kaboom! Their whole team is dead. I am enjoying that more and more the Paladins cast is so diverse because every single support legitimately feels different than the others. I think their heals feel like they all have incredibly long timers, but maybe that’s just me. 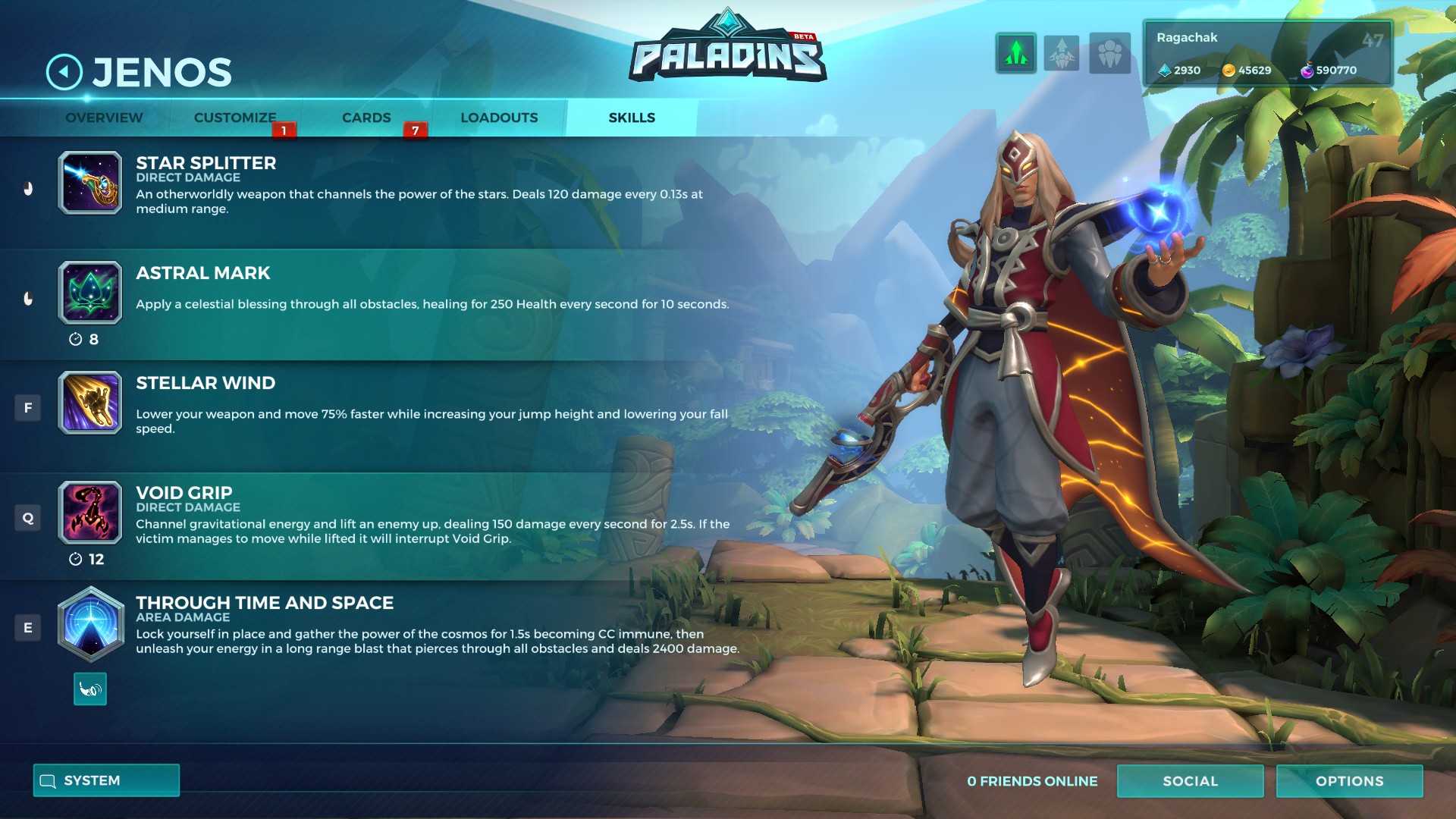 2500 Heal:  Sure it starts at 10 seconds, but you can card it down, and you can use another card to give you up to 60 percent on a Void Grip kill [which is not so hard to do], you can really use it frequently if you build it. Not to mention, you can use it through buildings, obstructions. Line of Sight is not an issue for Spaceman Jenos the Red Comet. He heals whom he pleases, almost whenever he pleases.

Interesting CC:  Void Grip is kind of ambiguous in its description, but I love it. It’s a Force Choke from Star Wars, where he hoists them up in the air, and from a nice distance. It deals damage [and can be Legendary Carded for even more], but the caveat is weird. If they “move” during the CC, it’s broken immediately. Is it CC or is it just a damage skill? But from what I’m aware, most of the movement skills don’t work in it. I haven’t been caught in it as another character so I’m not sure. But … they can still shoot you.

Combo Potential: He works well with so many characters. Just so many. My favorite so far is Seris+Jeris, as I said above, but his Void Grip, if your team knows it’s on the way, they can be in position to murder someone who is stomping all over your team. Cassie constantly behind you? Turn around, hit the Q, let your ranged/flanks jump up and drop ‘em! Mainly his Void Grip and his Through Time and Space, because I frankly this his F is kind of rubbish … But he works with a lot of team comps, due to mobility [the use of his F, funny enough], and the rest of his kit in general for CC and raw damage output. He can activate his heal then go do something else! 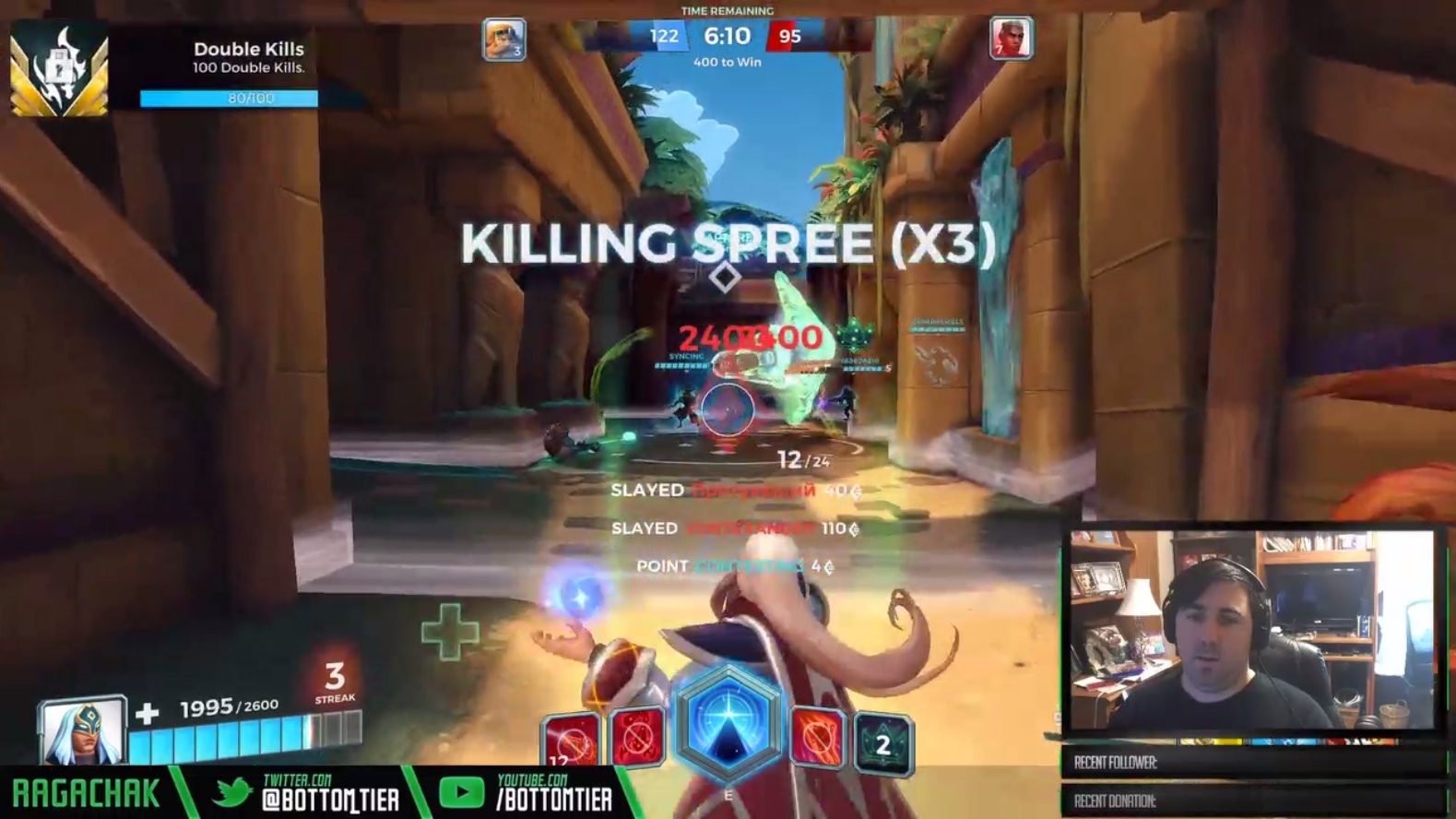 F Minus … Minus: I’m not really a fan of the F, Stellar Wind, just in general. You move 75% faster, gain an increased jump height and a lowered fall rate, as long as it’s activated. But you can’t use your weapon while it’s going on. Sure, it’s a great way to get into position or get away, but it just feels kind of silly to me. Not a fan, the only thing about him I’m not a fan of.

Here’s the Windup: Okay, so his ult. It hits for 2400 damage, goes through all projectiles, buildings, anything. If it’s in the way, it’s not in the way. And he becomes CC immune, so you can’t stop it once he’s in position, other than killing him! But it is so. damn. slow. Lord above, the firing angle for it’s a little weird, and once you’ve committed, you can’t turn it or angle it any other way than it’s set. I’d love it to have some kind of turning component once you’ve committed, to scare people and be far more useful.

Who Watches the Watchmen: Healers are great, but this is one of the problems I have with most of the healers in Paladins: Who heals them? Seris and Jenos, while they’re incredible single-target healers, they cannot heal themselves that I’m aware of. If there’s a way I don’t know how, and it’s very frustrating to be at 200 health, running away and having nobody that can save you, because your team isn’t there to help. If you aren’t using the card for it, you get no heal other than potential Lifesteal or out of combat Regen. 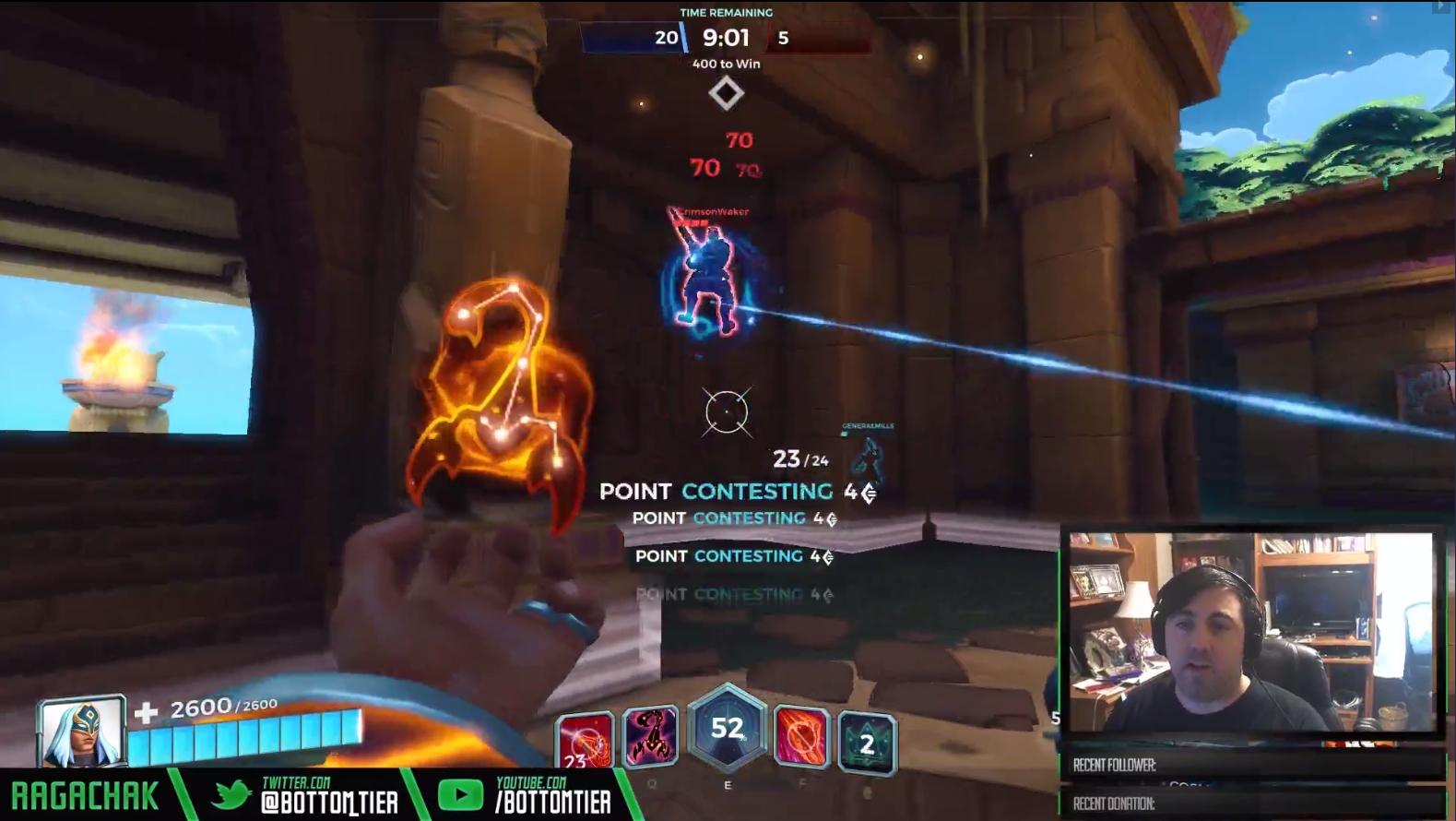 They can skate, but they still get choked out.

LMB: Star Splitter [Direct Damage]: Jenos fires a rapid series of blasts from his otherworldly weapon, that does 120 damage every .13 seconds at medium range.

RMB: Astral Mark [Heal, Targeted]: Apply a celestial mark through any and all obstacles, healing 250 health a second for 10 seconds. [8 second cooldown]

Q: Void Grip [Direct Damage, “CC”]: Channel gravitational energy and your inner Sith Lord. Hoist up an enemy from range dealing 150 damage every second for 2.5 seconds. If they manage to move during it, it will interrupt Void Grip. [12 second cooldown]

E: Through Time and Space [Ultimate, Area Damage, Line]: Lock yourself into place and gather the power of the stars. During this 1.5 second charge time, you also become CC immune. Unleash the power and everything in that line takes 2400 damage. It fires through all obstacles and will not be stopped short of death pre-fire.

Okay, let’s talk Legendary Cards: I like all three of his cards, but the one I find myself using the least in solo play is the “Luminary” card. Anyone who is affected by your Astral Mark [heal] deals 15% more damage for the duration, so 10 seconds. The only reason I don’t use it is that I can’t trust them to use it wisely. I find more often I use “The Power Cosmeum” which Cripples people afflicted by Void Grip, and deals an extra 150 damage per second, and it goes on for a base 2.5 seconds. So it’s certainly handy. It depends on if you have another healer/if you’re going to be relied upon to get last hits. And you can use it with the “Falling Star” card to reduce your cooldowns because they’re more likely to die after the Void Grip. “Celestial Touch” is probably the best one though, as it gives a flat, automatic 15% of their Maximum Health when they’re hit with Astral Mark. That can really save someone’s life, especially giving your tank more time on the mythical, legendary “Point”. 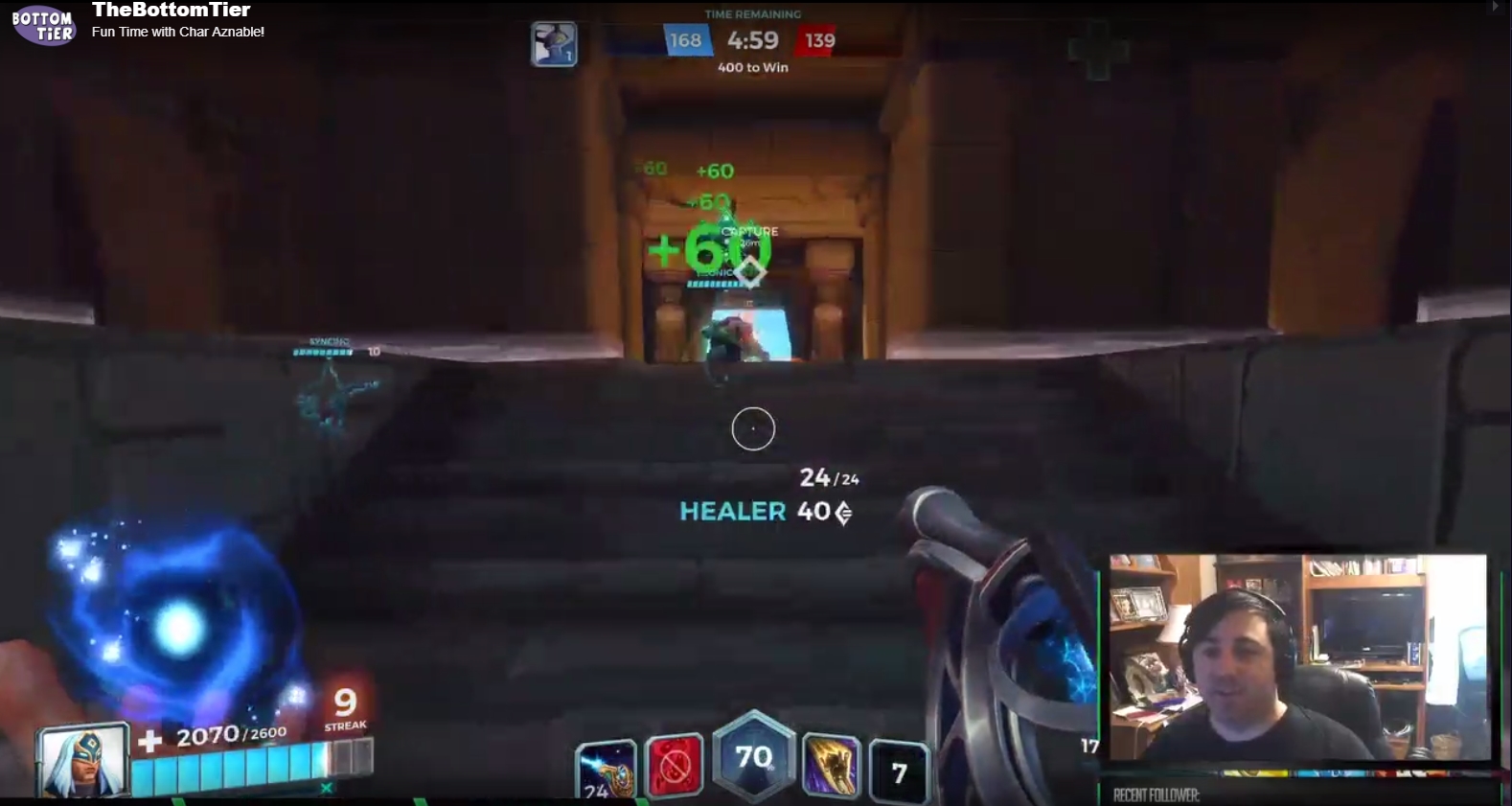 Probably one of the best heals in the game.

Variety Build:  Falling Star [IV], Relativity [II], Lightyears [I], Retrograde [IV], Eclipse [I]: This was the first deck I came up with to try and stay alive in battle. Well, sort of. I built it, then I hated it, and stopped using so much “Reduced Damage in Stellar Wind. Nope, I’d rather make my heal/choke better. This is all about using Power Cosmeum and Falling Star to get cooldowns reduced as much as possible. A bit better range on the already great Astral Mark, a returned heal [80 per second], and two seconds off the time. So by the time it ends, I can do it again. The 20% reduced healing on Void Grip is just icing on the cake.

Stellar Wind Build: Falling Star [II], Relativity [III], Penumbra [II], Solar Sails [II], Cosmic Barrier [III].  I had to at least look up a Stellar Wind build, because I’m not wild about it, but that’s just one man’s opinion. This recharges your ammo in it, gives damage reduction [24%] in it, 16% life steal, a good heal back on Astral Mark, and some of Falling Star, which is arguably his best card.

Jenos, Space Lord is not to be trifled with.

Jenos is a unique force in Paladins, and his ability to ignore his surroundings to do his job is fantastic. I love it, and I’m glad they aren’t just carbon copies of other characters. It also makes me glad because I think we’re finally getting over the “HURR OVERWATCH CLONE DURR HURR HURR” thing, which makes me incredibly happy. He’s got a nice, varied kit and while I’m not wild about one of the powers, it’s still very useful. I just am not crazy about it. But he’s truly something special, and kudos to their art and development team for giving us yet again, something truly interesting to work with as a support main. You can counter one of his moves, but I haven’t seen it happen yet. I don’t think people know that they can quite yet. This is to a supports’ credit because people that don’t know what it can do will just struggle and die.