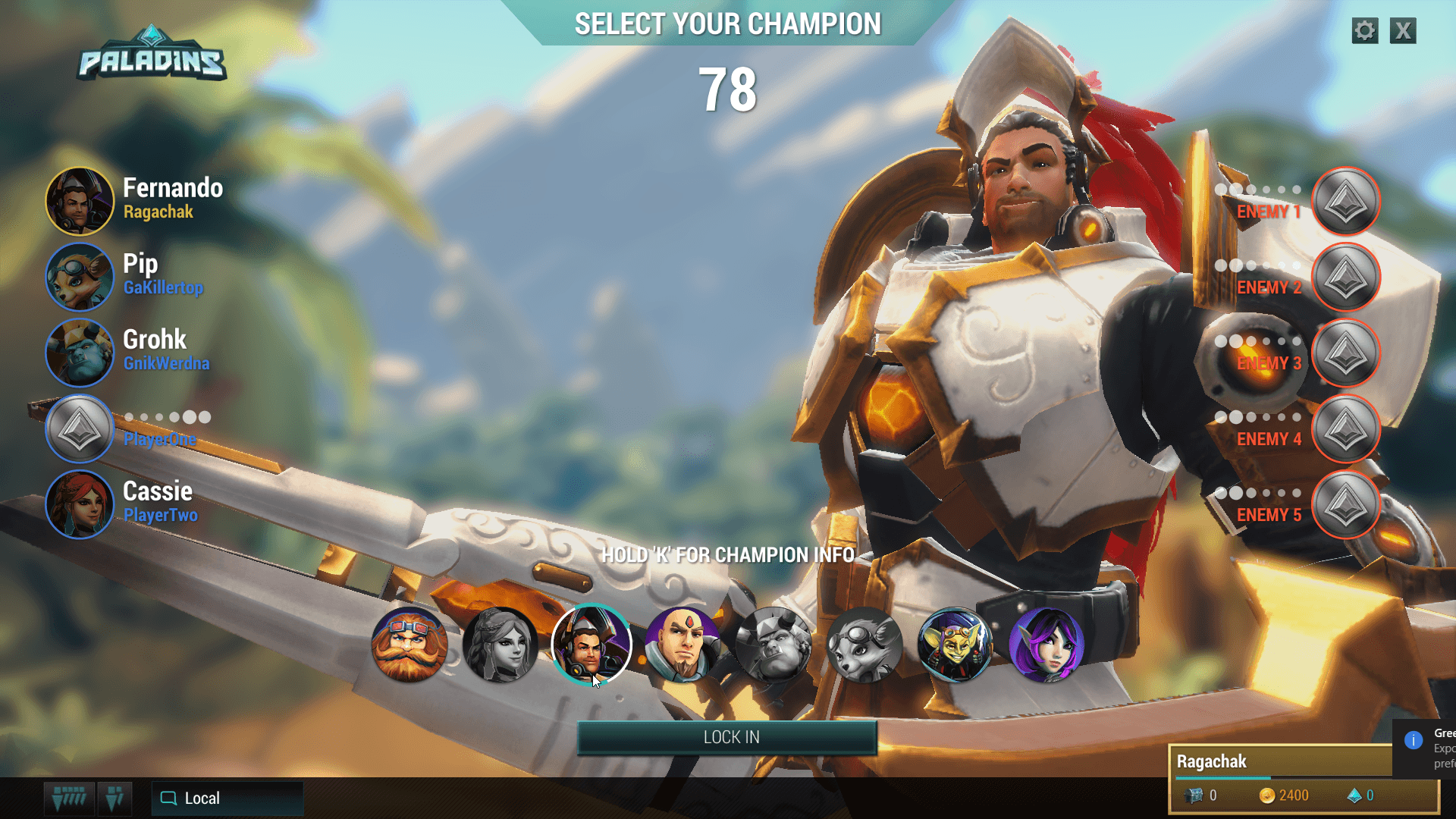 When I heard the name “Paladins,” I assumed it was going to be besieging, medieval warfare, something akin to the crusades. It turns out I was half right. Paladins by Hi-Rez Studios takes what they excel at (first/third person team-based combat) and put a new spin on it. But that’s not all! It also has deckbuilding! Yes, much in the way that you unlock cards in Hearthstone, you can do similar right here, which then lead me to think of something like the Yu-Gi-Oh anime, with card games on horseback instead of motorcycles! Thank God I was wrong about that. Each team consists of five characters, each with a distinct personality, look and ability kit (two attacks, one utility/movement). Each team is trying to reach the vault behind the walls of the others castle. The teams vie for chokepoints on the map that randomly spawn, and whomever gets the point to 100% first receives a siege engine that ponderously rolls towards the enemy base. It can be killed, and stays around until it is bested.

Each team has two castles, with a vault hidden beyond a pair of breakable walls. There are certain points on the map where the two teams will rush towards, kill each other and try to claim them. Consider them choke points, and they only spawn when there is no siege engine on the field. They stay until destroyed; I don’t think there is a timer, but typically a siege engine doesn’t get farther than one wall before the other team demolishes it. You level up like in MOBAs (but I hesitate to call Paladins a MOBA) such as SMITE or League of Legends, but there are no swarms of creep to kill, just other players. It does feel a bit repetitious I fear, simply running or riding from point to point, getting into a teamfight, and either defending or pushing. That’s about all there is to game mechanics. But the card system really spices it up. 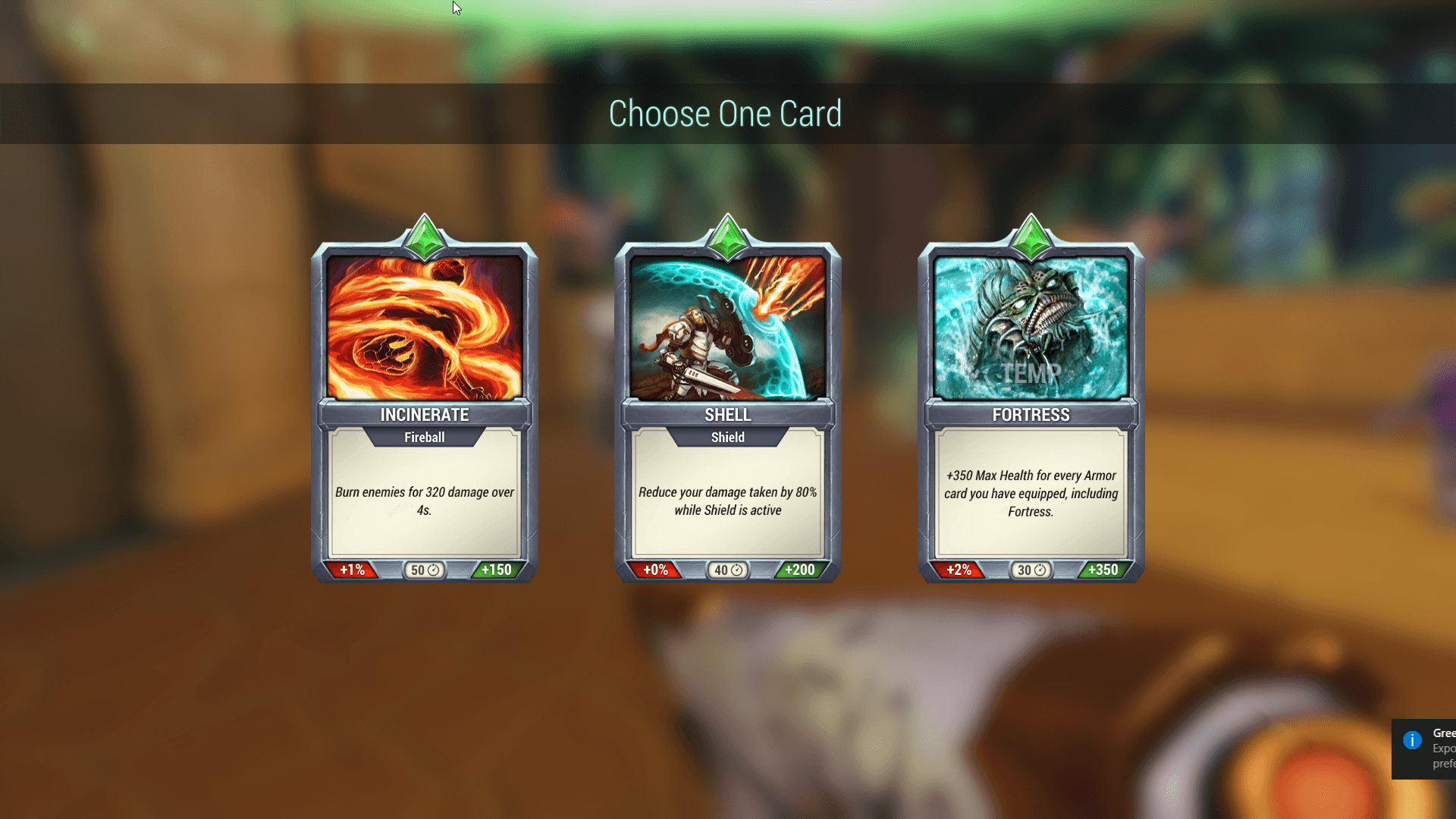 You get a choice of one card at the start of a match.

I have mixed feelings going into this game, particularly with the card aspect. Right now you only get Radiant Chests when you level (which gives you five cards, and so far at least one rare in each), but there are chests that give you just one card that you can acquire at the end of a match. There’s also the “Mythic Chest,” which I fear might be the purchased chest. The idea that it could be pay-to-win bothers me a great deal. I’m very much on the fence about random card acquisition, but the card pool isn’t gigantic (30 cards per character right now) and you can use your duplicates to craft cards. Regardless it’s a fun, fast-paced game, and being behind doesn’t mean you’re going to lose. Comebacks are very real. I find that most of the time, the matches go back and forth, and can really come down to the wire! It’s intense from start to finish.

When you start a match, you pick one of three cards from a randomly selected pool. I wish I had more influence over what I start with, but it’s all random. Each one has a different use and the higher the rarity the greater power that comes from it. You have to really consider the composition of your team in instances like this. When you level up, you press the same key to pick another one out of three cards. Each champion has 30 total cards right now, and through chests you will unlock more. Critical thinking skills in the heat of battle will serve players well, and picking the right card for the situation will be key, though there’s a lot of synergy in your cards. Fernando, the Spaniard Cavalier, has a set of cards that give him bonus health for equipped armor cards, cards that boost his charge and apply on-hit affects to it, or make his shield better. Skye has a variety of cards for her stealth (such as increased damage post-stealth, auto-stealth at low health, etc), and it only goes on! Though if you die, it’s important to note that your cards go on cooldown. You never “lose” them in gameplay, but you do have to wait to use their effects again. The greater the rarity, the longer the cooldown. Please note that if you die and leveled right before that, you can pick a card while waiting to respawn without it going on cooldown! It’s also easy to see who is winning; there are three blocks at the top of the screen, color coded for teams. Beneath that you’ll see a meter of who is winning the war of the spawn point. 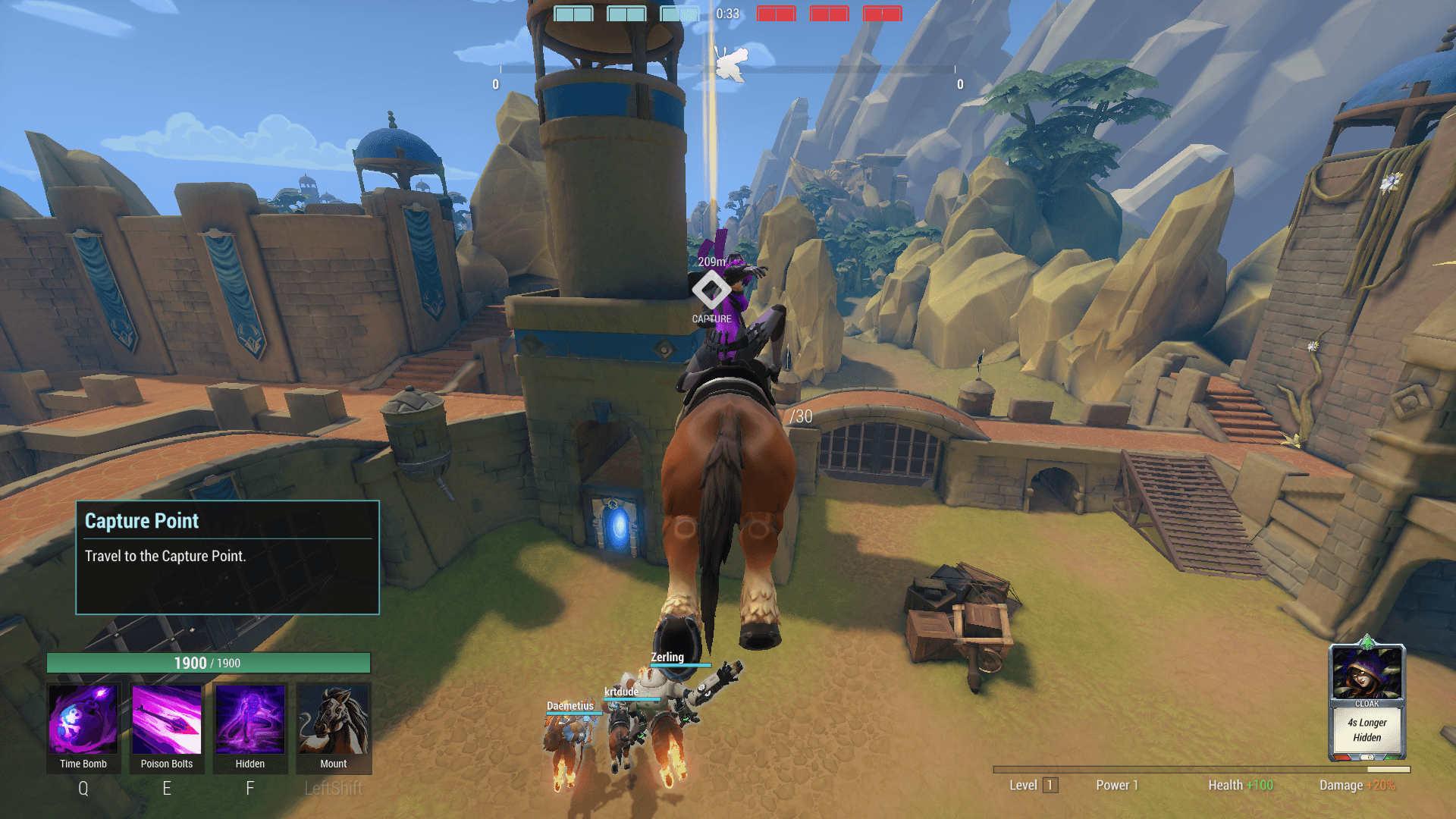 Thankfully if you have duplicate cards you can craft ones that are not in your collection. I’m grateful that you get unique cards from crafting and not more damn duplicates. You need 3 of a type of card in a rarity to craft a new one, but there’s also an option to craft a new card out of 5 of a rarity level. I haven’t tried the second choice, because it’s not guaranteed to be unique. There’s another mode that isn’t available yet, where you play using a pre-constructed deck. I feel like this mode is going to really benefit players who know the game, but don’t have the same power cards that others do (who have spent money or simply more time). Though even if you have all the legendary cards in your collection there is no guarantee you’ll see them in game as Casual mode gives you random cards in your collection. People in the beta have a distinct advantage currently; if they bought a founders pack they get a cool mount and card chests to get them going. Not to mention that there will be as few wipes as possible, and anything bought will be retained. I still have dreadful fears of pay-to-win though. . .

The name confused me at first; when I think of Paladins I think of mighty holy warriors out crushing evil. But a Paladin is also just a heroic person or champion, someone with above-average skills. These characters definitely fit that bill, but they are not the fantasy style Paladin at all. The gameplay strikes me as terrifyingly repetitive. There are a few maps available right now, but after several days of gameplay I have ONLY seen Temple Ruins. I saw a second map once, but I’m starting to wonder if it was a fever dream. Sometimes, keeping a game simple is really beneficial, so time will tell on this one. But I enjoy it. The bot matches help you learn a character and the flow of gameplay, but to really learn it, you need to jump in against other players. I appreciate the fixed points for siege engines, and that they are randomly selected. I have mixed feelings about the repetitive gameplay, and can only hope that the other maps will offer new challenges. But strategy and paying attention to the terrain is pretty key, as you can surprise players by appearing above them on outcroppings, and shooting them before they can do anything about it! I’m having a lot of fun with Paladins, and people looking for a team-based shooter could certainly do worse. Buying in gives you a cool mount, and 20 card chests to get you started! Card decisions, teamwork, and cool characters make Paladins a great addition to the free-to-play PC gaming pool.

Want to see Paladins in action? Check me out with ColtronXL in our Bottom Tier Live First Look! 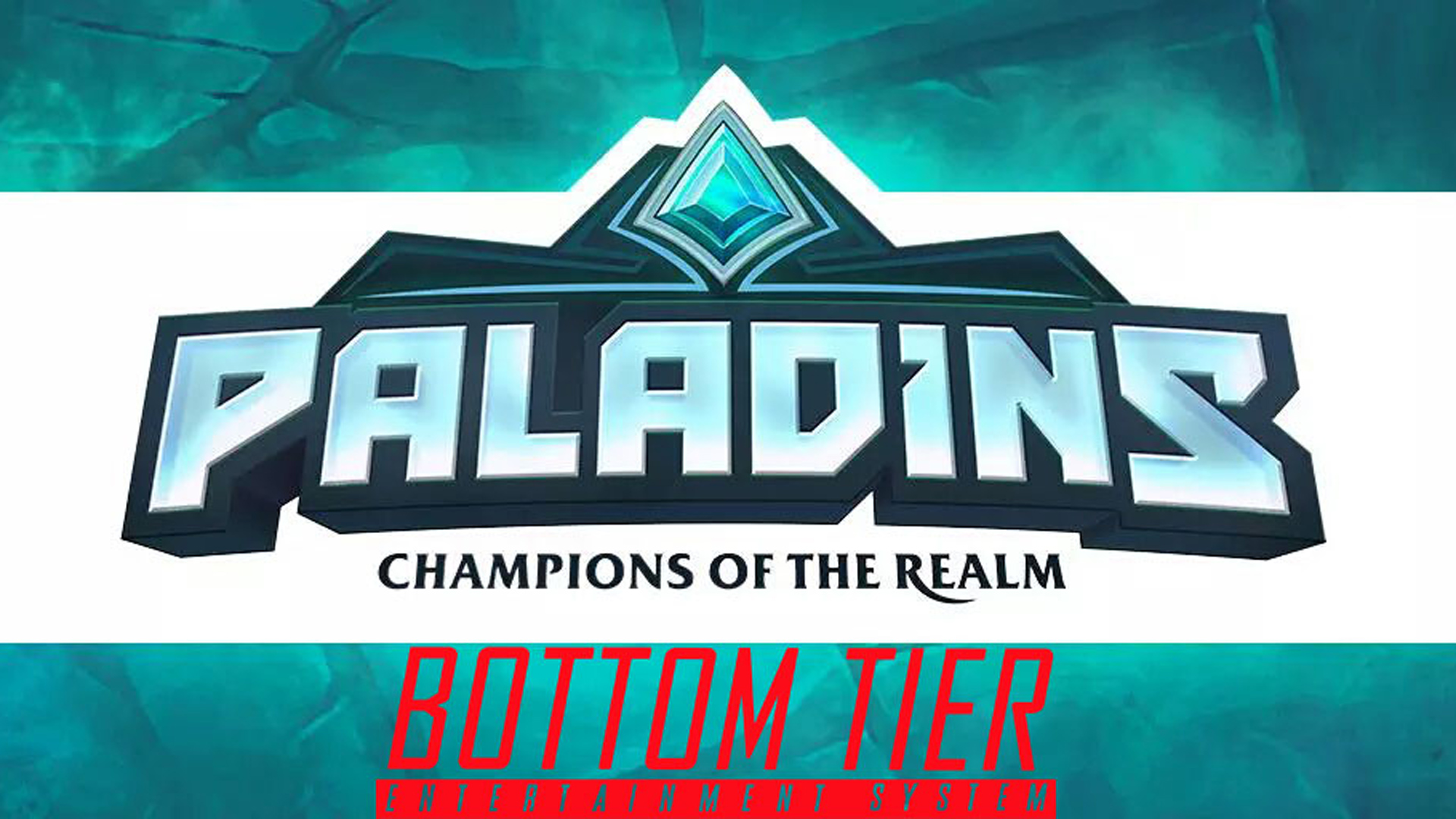