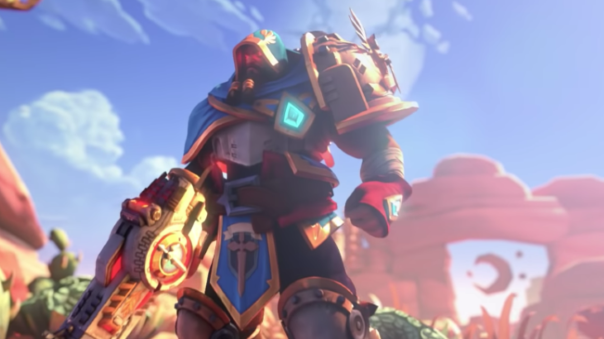 I haven’t done one of these in a while, and honestly, I missed doing them. What better way to return to Paladins content than with a new Frontline? Atlas, the Man out of Time is from a future where their world has been overrun by darkness. Through mastering crystal magic and time control, he stepped back in time to see if he can’t put things right. With his cool armor and bionic arm, he’s going to do whatever it takes to avert a terrible future. How fitting that he’s a frontline! He has a unique weapon as well in his Chrono-Cannon. It shifts from wide-spread buckshot to an accurate sniper rifle, depending on how long he charges it. He can take people and bring them out of time, exiling them just long enough to turn a fight or secure an objective.

Now, I love playing as Torvald and Fernando, but Atlas is a whole different kind of disruption, and I think he brings a lot to a team. I’m torn on if he should/could be the main tank, or an off-tank. His only shield has a very long cooldown (14s), but it nullifies all ranged attacks for 5 seconds. With a sound healer, he’s truly a force to be reckoned with. I’m not 100% certain on if he’ll see a nerf, but he’s pretty potent the way he is now. His shots aren’t the easiest to land unless you’re an experienced sniper. I think Atlas is in a pretty good place, but his disruptive nature will see people complaining about how strong he is. His damage might be a little on the high side, but I’d have to see more of him in a higher-level setting.

Shots? What Shots? Stasis Field could be the absolute best shield in the game, and when you couple it with Temporal Divide, it becomes a literal wall of “Stop Doing That”. Torvald ulting in like some kind of a jerk? Not anymore! Snipers giving you trouble on the point? Nope, that’s put a stop to immediately! It doesn’t have a health bar, it’s just five seconds of relief for anyone behind it. It’s not massive, but that’s what Temporal Divide is for – but there’s a catch in increasing the CD by 50%. So, weigh that carefully.

Disruption City: His entire kit is disruptive, and it’s so beautiful. His RMB, Setback sends players back to where they were 4s ago, at the lowest HP they were at. Did a flank dive into your team to do something rude and escape? Land that shot and they’re right back where they were, ripe for the plucking. You can also rewind time for yourself if you’re out of place, or want to do something to distract an enemy team using Second Chance. Plus it heals you! The Chrono-Cannon is disruptive in that you never really know what shot he’s going to go for, and then there’s Exile. Just banish up to three people on their team, and deal with that annoying healer.

Cool Down, Buddy: Every single one of his cooldowns is on the high side, but all of his powers are pretty useful. They have just about no downside, so you really have to know when to use them. POpping any of his abilities early could really leave your team in a bad spot, for when you need them the most. This makes me want to take a CDR ability instead of Ultimate Boosting ability, which frankly, makes his Yellow Items a very difficult choice overall.

His Powers are His Weakness: While it’s great to banish people and rewind time, this can really be a detriment too, if you do it recklessly. If you pop your ult and miss all three shots, or hit the wrong person, you can still be doomed. Not to mention if someone rewinds back to a position and you don’t see them? They’re going to get away or get a kill, you can be sure of that. Or you could even rewind yourself into a gank. So be aware of what everyone nearby is doing.

LMB: Chrono-Cannon (Direct Damage, 6 Ammo): The Chrono-Cannon can be charged for up to 1.5s. The longer it’s held, the more accurate the shot is (900 dmg). If it’s just clicked, it fires a burst of shots.

RMB: Setback (Damage, Unique): Atlas fires a shot of concentrated Chrono Energy at a target. Those who are hit rewind back to where they were 4s ago, at the lowest point of health they were at.

Q: Stasis Field (Wall, Defensive): Atlas erects a barrier in front of himself that nullifies all projectiles fired at it for 5s.

F: Second Chance (Defensive, Unique): Atlas travels back in time 5s, and your health is restored to the highest point it was in that time period.

E: Exile (Banish, Unique): Atlas supercharges his Chrono-Cannon for three shots. Enemies hit by these shots will be Banished for 4s. Enemies that are Banished cannot be interacted with at all.

These are still works-in-progress, but these are a pair of builds I’ve been working on:

I really like Atlas as a character – normally I’m pretty Anti-Time-Travel, but I like his concept. It reminds me a lot of Bishop from the X-Men, so that’s a plus. His time travel isn’t super lengthy, but still enough to make an impact. He has lots of different ways to play, and you can use the forced time travel in really creative ways if you have the mind for it. I like that most of his abilities are not damage dealing because I think that would make them pretty busted. If his ultimate also hurt people in addition to banishing? Man, that would be repulsive. I like all of his talents, too, which is pretty rare for me. Personally, I enjoy Deja Vu the most, but in competitive, I can see a lot of Temporal Divide going on, especially if you have communication with your healer/other tanks. Being able to tell them when it’s going up so you have another shield to rely on afterward would be a godsend. I like Frontline that don’t feel mindless, so knowing what shot to use when, and what target absolutely has to be removed from a fight will separate the Bill & Teds from the Bishops.

As a Frontline, you want to be in the thick of every fight, and that’s risky when using a sniper shot. Personally, I tend to rely more on the quick burst fire, when nice and close to my targets. I’m not much of a sniper, so I worry about what’s right in front of me. Atlas is a threat just by existing, so he’s going to be focused or maneuvered around quite a lot. Sure, you can rewind just any old target, but try to avoid just hitting your buttons as soon as they’re up. Nothing’s worse than almost killing Androxus, accidentally rewinding him, and now he’s out of sight. Next thing you know, that jumping fool is gone! Atlas works best with other disruptive champions – Bomb King and Willo are prime examples. Set up some explosives on the ground, and force the enemy assassin or healer into them, and detonate! Teams with a lot of burst damage will help as well, especially if you can isolate someone with his ultimate. There are champions that probably won’t fear him all that much, like Terminus. He can just walk right through the shield, axe swinging away. Incredibly agile champions will make him miserable too, dodging his shots, evading time travel, and being in position when he’s done rewinding. But if you can aim where they’re going to be, instead of where they are? You can put those flanks in their place – in the ground.