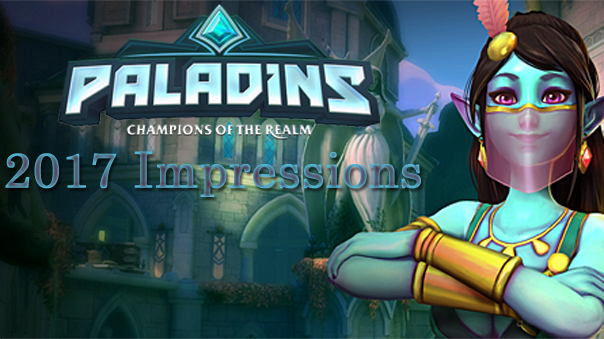 Okay guys. We’re going to talk about Paladins [again]! We’ve done at least three videos on it, but we need to update our write-up on it, and so it falls to me! And that’s okay; I love the game. But we do have to get something out of the way straight away. If I don’t, someone’s probably going to kvetch about it or brag about how they noticed something I didn’t. The Internet is a weird, awful place. Yes, there are similarities between Paladins and Overwatch. Paladins entered development before Overwatch though. So how it’s a rip-off or clone is absolutely beyond me. Sure, there are similarities, but that’s not exactly new. League has stuff from Dota, Smite has stuff that looks like League, that’s just how things go. But Paladins is more inspired by the earlier game that Hirez developed, Tribes. So, can we just do this without yelling and crying about how it’s “Welfare Overwatch” or “Free-to-play Overwatch”? Besides, who cares? If that’s how you view it… it’s free! In what way is that a bad thing? I’d rather look at it on its own merits, instead of Internet naysaying. So that’s what we’re going to do! I’m going to do my level best to keep that right where it belongs: on Reddit or 4chan.

Paladins: Champions of the Realm was our top F2P game in 2016, and that’s well deserved. It’s a team-based, class shooter, with at present two game modes. There’s the Payload mode [which I hate!] and the Siege Mode, which has certainly improved since earlier versions of the game. The game has changed so very much, and I’ve been playing on and off since Closed Alpha. It’s been very nice to watch this game go from an unplayable dreck, to the far more enjoyable version that we have at our disposal right now. Is it perfect? Not even close. I still feel like the game is incredibly hard to make a comeback in once you are behind in Siege Mode. But after seeing it played on a global stage with the Paladins Invitational, I now have to recognize that it could very well be just me being awful, and not a facet of the game. I’m willing accept that, but there’s another thing that I need to point out. At this point in time, the Matchmaking is certainly very much busted. I don’t know what’s wrong with it, and I’m not entirely sure that the developers have pinpointed it; but it is a very real thing. This is not a slight against the game, and I’m not mad about it, because it is still in beta, but it makes the game upsetting when you find yourself going match after match being completely outclassed. But you do have roles to fill that are all varied, and the characters are fantastically designed. You have supports, damage dealers, flankers, and frontliners.

The two game modes are pretty simple, and both have a pretty standard item system, which feels kind of similar to the card system. Honestly, I don’t like the items at all. It’s not super clear to me how you gain currency [or it wasn’t until I played on PS4], and the “items” are kind of bland, and don’t feel like items. They’re more like upgrades. A rename to them would do wonders though. But what about the game modes? Payload is bollocks. I hate Payload so so very much, but it’s a good mode. I just hate it in every game I’ve played it in. You have a payload, and the assaulting players leave their base early to set up. You have to stand on it, which is the hardest thing in existence, and push it forward. If neither team gets it to the point at the end, whichever team gets it farther wins. Pretty simple stuff. Siege has seen a tremendous change since its original inception. Originally the point moved randomly each time, and you’d have to hope it was in a good spot! Now there’s one point it spawns at, and the first to get that point to 100% gets the Payload, which once again, you have to fucking stand on. STAND ON THE DAMN POINT. IT IS NOT HARD. Ahem. Whichever side gets that first point seems to have a bigger advantage, from what I’ve seen. Here’s what I mean. Getting the payload gets you a point, and getting it to the end gets a point. Failure to get the payload in gives the enemy a point. If you got the first point, and it winds up tied 3/3, simply getting the point will give you a victory. But you had to get the first point. I’m not 100% on this, but it’s happened to me before so I assume that’s just how it’s supposed to be. Once you’ve hit level 15, you can play the test maps, which is also really neat, so you can genuinely be in the testing process.

But change is the name of the game, and the devs absolutely are listening to what is wrong and what’s right with the game. Do I have an example? Of course I do! Just check out this season 1 dev insight video! Beyond that, the card system used to be horrendous. You could basically only get cards from chests, were not able to spend gold on them, and all cards had a set rarity. It was basically real-time Hearthstone plus a shooter. It made my teeth ache, because you really had to get lucky to get the cards you need. How does it work now though? You have access to every single card. You can still unlock them with chests [that you get as you level, and through simply watching Smite/Paladins on Twitch if you watch a Hirez stream, like twitch.tv/thebottomtier, for example!], but you can also use gold on them. They no longer have “set” rarities, either. Here’s how it works now: You select five cards, and already have a default hand you can work with. Each card costs 1200 gold, and it’s not hard to get gold. You have twelve points to go into that hand, and each card takes a point, and each point of rarity takes a point. “Wait; each point of rarity?!” I hear you asking. Yes! You can adjust the rarity of cards as you go! They all start common, but each point of rarity increases the power of the card. So you can figure out what you want to focus on in your hand, creating tons of customization options. Want to focus on health as Bomb King? Make a Rare/Legendary “King’s New Cloak”! Playing Tyra, and need to prevent Slowing effects? Increase the power of “Trail Blazer”! You can make some truly powerful cards, but balance will be your friend. So in addition to knowing what your character can do, it’s important to know what cards can do.

Live Up To The Hype? Hell Yeah It Does!

Honestly, this game has gotten so much better since last year. I used to dread being told to play it, but now I play it whenever I get a chance. They’re listening, they’re working on it, and they’re paying attention to what their audience is interested in. You can customize pieces of your look, like just the weapon, or the body armor, the pose, and all kinds of stuff. The cast is kind of small still, but it’s still a very young game, and again: BETA. It’s still being tested! I’m looking forward to more modes, or more variety in those modes, more varied quests, and things like that. Paladins is a completely different game from Smite, from Overwatch, from any other game on the market right now. It’s a fun shooter, it’s in Open Beta, and if you aren’t looking into it, I don’t know what you’re doing with your day, but it’s not the right thing. As you gain chests you can get cool costumes, cards, and the community is more than willing to help people learn card combos, or find some for your own. Paladins: Champions of the Realm is still under construction, but it’s really going to be a stand-out title this year.