Overwatch – The Sombra ARG So Far

A few months back, Blizzard Entertainment had released their blockbuster FPS title called Overwatch and it was met with a ton of critical acclaim for being the most fun and accessible team-based FPS of 2016. During that same time, I released an extensive review on the game and gave my open thoughts, suggesting that while it may have some issues and flaws, it was indeed an enjoyable experience. One of those issues I had with the game in particular, while not being a complete dealbreaker, was the lack of a campaign story mode that would allow players to experience the events in the Overwatch lore for themselves, such as the Omnic Crisis where players would fight against the robot uprising. 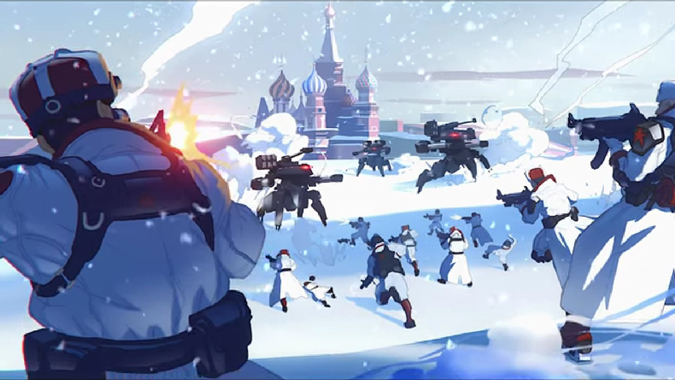 Russian winters can stop anything. Even the robot apocalypse.

For me, it was somewhat disappointing to see all this story and lore built up, but with no way for players to actually experience it for themselves. As Blizzard staff have mentioned: all multiplayer matches are considered to be non-canon, as it wouldn’t make much sense for characters like Solider 76, Tracer and Winston to be teaming up with the likes of Reaper, Widowmaker or even Symmetra (considering how much Symmetra’s ideals clash with Overwatch’s ideals of liberty and freedom.) Simply put: Overwatch was made to be a competitive, multiplayer focused experience, with story and lore only being there for show.

However, Blizzard knew how much people wanted to be part of the Overwatch story and came up with an Alternate Reality Game (ARG) that players could interact with directly, and it all started with a mysterious character simply named Sombra. After watching tons of videos and discussions on the character, I would honestly say that I would like to retract my previous statement regarding Overwatch needing any kind a story mode campaign, because the ARG that Blizzard Entertainment has given us over the past few weeks has kept me equally hooked into the world of Overwatch as much as the game itself.

How it all Started

For those that haven’t been following the mystery: It all begins on a specific game map in Overwatch known as Dorado, a city in Mexico that became a hotspot for the Overwatch task force after the end of the Omnic Crisis. In that city, there’s a huge power plant that can be see above the buildings and bits of newspaper trimmings sprinkled around the city streets. However, both the newspapers and the power plant speak of a mysterious person named Sombra, who apparently has been lurking around the area enough to warrant the power plant systems having a protocol just for Sombra. The interest of this character intrigued players enough to start snooping around for any details about them, and one major detail that popped up was a voice line by the villain Reaper which was hidden in the game files stating “Where’s Sombra when you need her?” 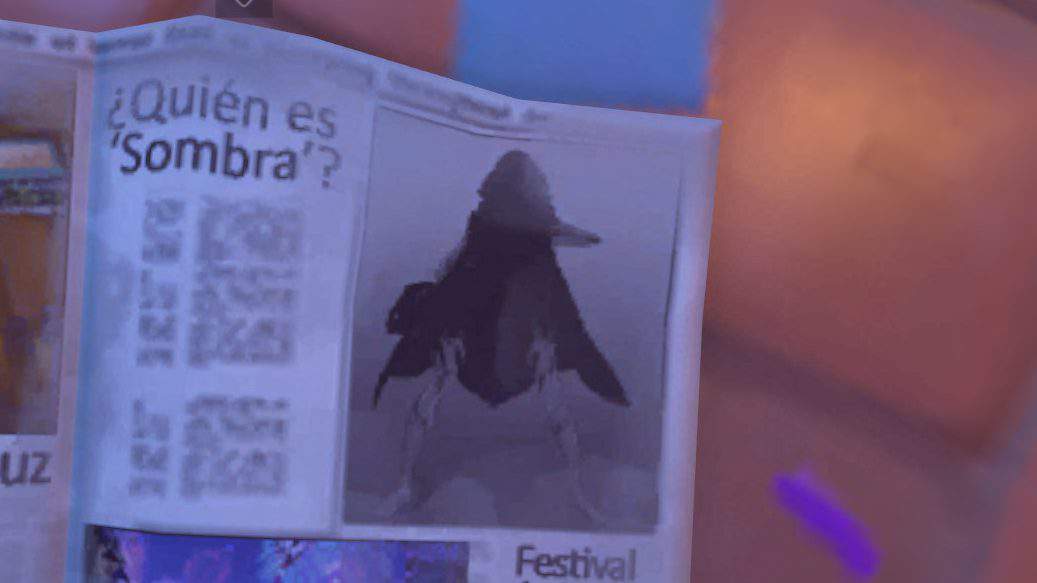 Our money is on Carmen Sandiego.

That was more than enough to suggest that Sombra was a character made for the game and not some throw away element made for the Dorado map, and so people started searching for more clues as to what Sombra may look like. Players went searching on different maps and found one peculiar image on the Temple of Anubis map regarding some person with a hoodie and a visor with a triangle symbol on it. The character looked mysterious enough and many people thought that the image of the hooded person was Sombra.

It quickly turned out to not be the case, as Blizzard then revealed that the hooded person was actually Ana Amari, a support sniper of the Overwatch task force and the 22nd playable hero in the game. With that one question of the hooded figured out of the way, many were still left scratching their heads regarding Sombra’s own existence.

The details (so far)

Now, there is a TON of details regarding everything that has led up to the Sombra story at the point, and you’re probably better off watching some of the conspiracy videos on Youtube, but I’ll be doing my best to cover the finer details. One main detail that we know for sure is that Sombra is Spanish for shadow, most likely referencing the “Señora de las Sombras” which translates to “Lady of the Shadows”, suggesting that Sombra is female.

After the Ana Amari character reveal, some weird pieces of footage started showing up in the recent official Overwatch videos, most notably in the The Ana Amari origin story, the developer update for Ana, and the summer games promo for PC. There was a secret message hidden in each of those videos, but the only way to read the message was to decode, decipher and decrypt various codes found within each of them. 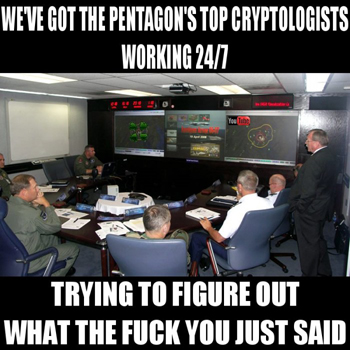 This picture sums up how the hidden codes were received from the community.

It’s literally the perfect image to summarize the whole ordeal. Blizzard has taken so much time and effort to make up these hidden message that we have Overwatch players from all other the world gathering in discussion forums and chatrooms discussing theories and details regarding who Sombra could be and how to go about unlocking the hidden messages. 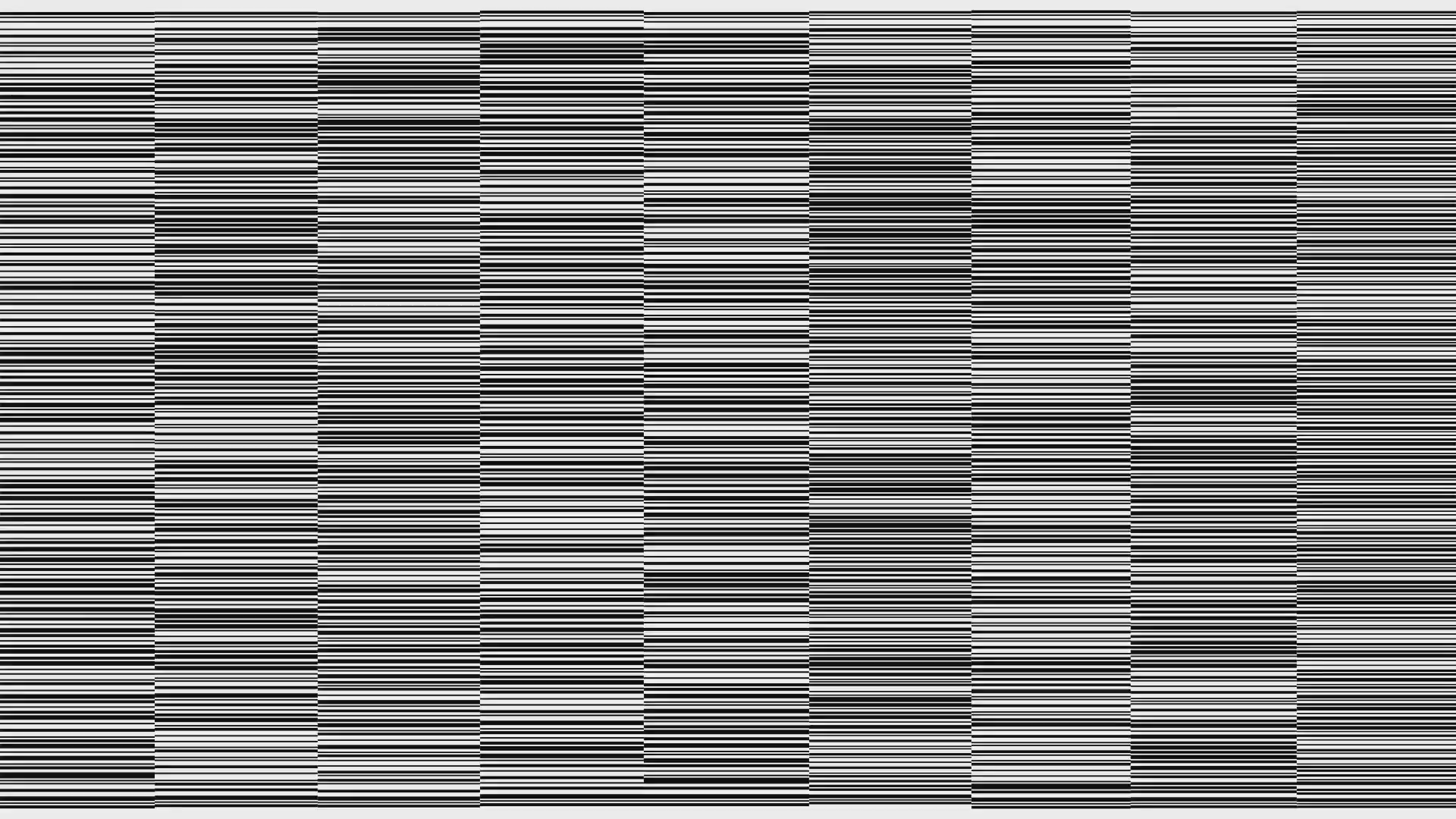 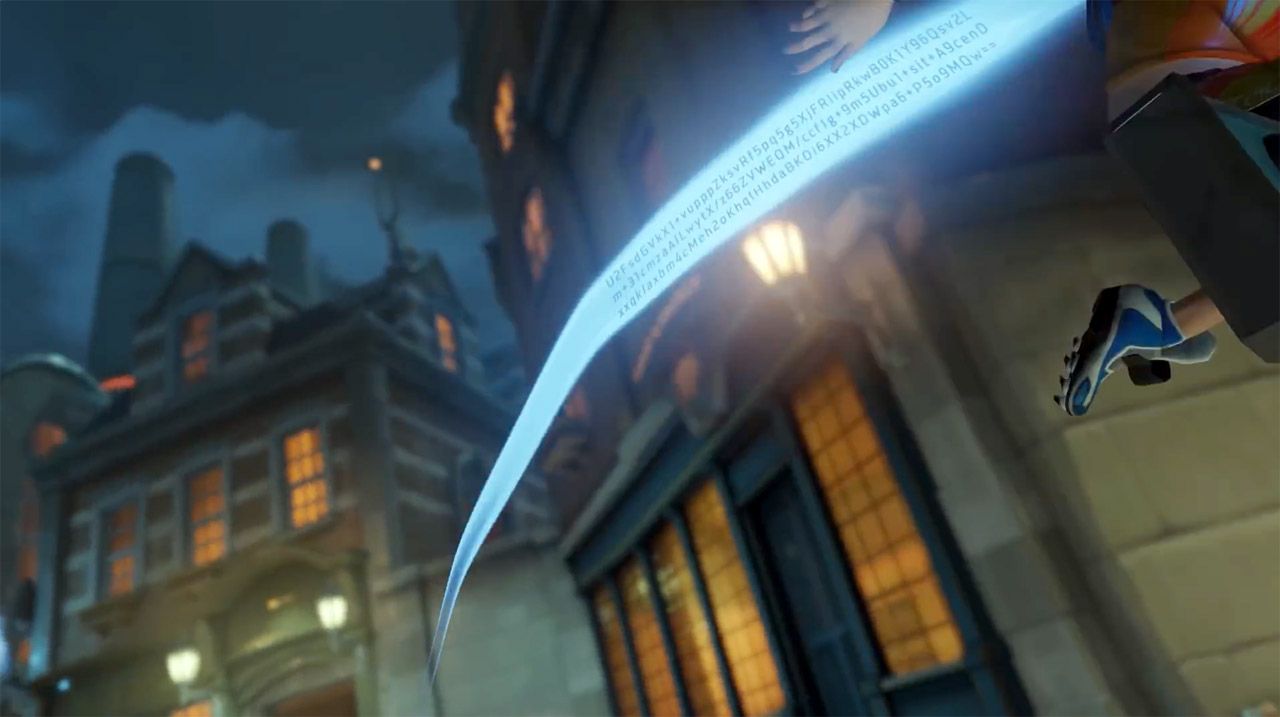 While the images above may look like random mess of text and barcodes, they’ve been the focal point for this ARG for weeks now. So far, the first two hidden messages have been figured out, and they read “She who controls the information has the power.” And “Was that easy? Now that I have your attention, let’s make things more difficult.”, which is supposedly messages from Sombra herself speaking to the players.

And with that last message mentioning about making things more difficult, it certainly wasn’t just a jest, because at the time of this article’s post, the third message has yet to be unlocked by anyone. People have come up with so many different methods on how to crack the code needed to unlock this message, but all of them have failed. One person went as far as to try and assemble a “Skysong” in order to figured out the message (https://www.reddit.com/r/Overwatch/comments/4w7ey1/the_sombra_skysong/)

Apparently, the folks attempting to use the skysong were so off base and off track that Sombra herself had to step in and give us another clue: On the official Overwatch website, in the media page, a corrupted image of Dorado was seen next to the original, non-corrupted one. 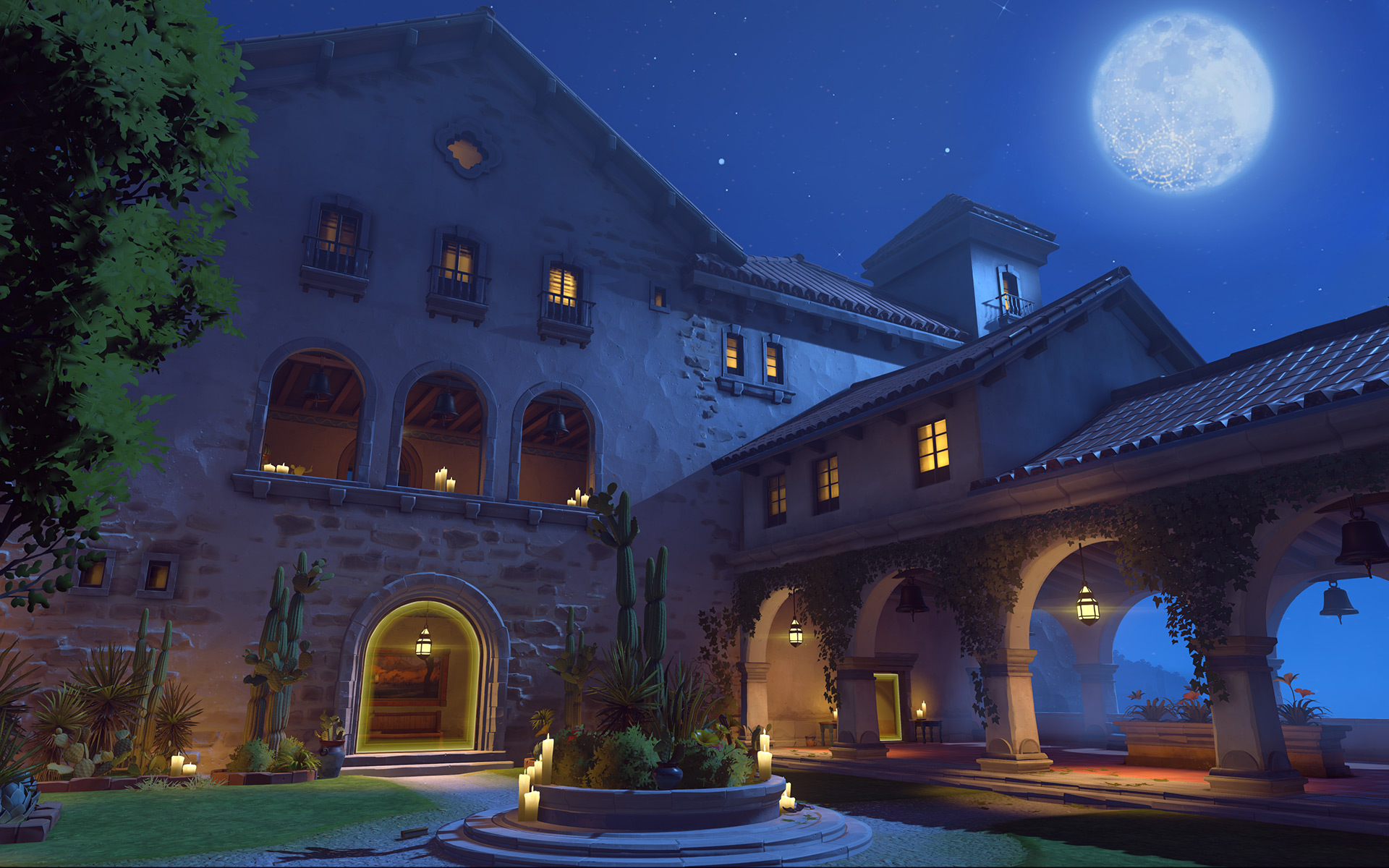 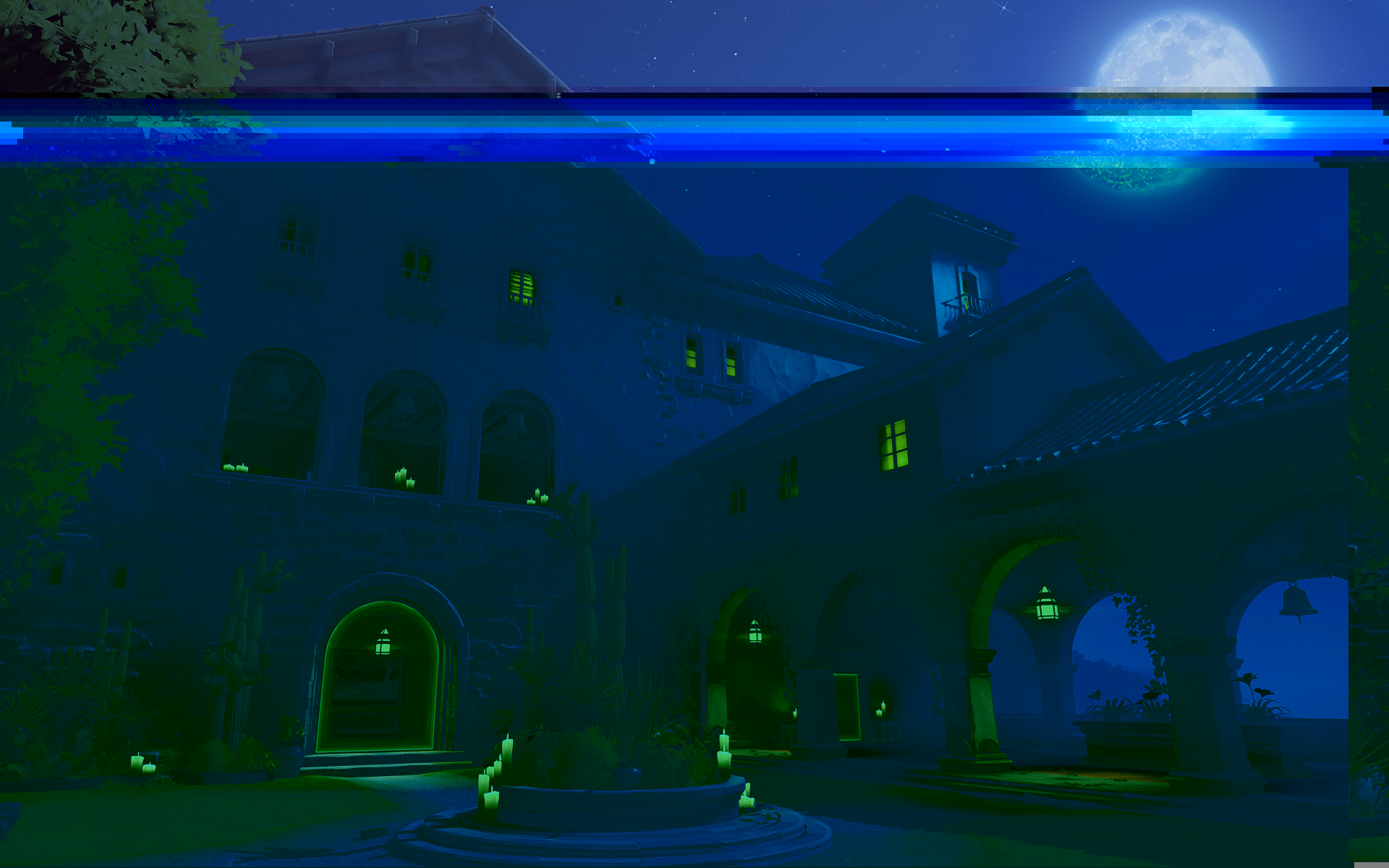 Players instantly compared and compiled the two images to find a new hidden message that states: “Why do you look to the sky? The answer is not above your heads, it’s behind you. Sometimes, you need to analyze your previous achievements.” Like with the second message, it would seem that Sombra is speaking to the players directly, suggesting that she’s actually hoping for players to figure out these messages and solve the mystery.

Previously, one player suggested that perhaps what Sombra means by “past achievements” means that we need to look back towards older promotions for the game and analyze the information within them. Most specifically, one player decided to look up the old “Recall” animated short featuring Winston and Reaper at Watchpoint: Gibraltar. When Repear tried to hack Winston’s computer data as well as Athena, the voice system that speaks to Winston (and is also the voice of the in-game announcer for Overwatch), Winston inputs a password on his keyboard to flush the virus out and save Athena from corruption, except that he doesn’t use a regular English keyboard for input. He instead uses a keyboard that has Lexigram symbols on it, based on Yerkish, a real world language system that scientists use to communicate with monkeys, gorillas and other primates in various studies. With all of this info built up, many players are starting to believe that maybe Sombra isn’t actually a person, whether human or omnic. Maybe Sombra is actually a virus that can infest data, or rather can infest live programming like Athena, who in turn can infest omnics.

Which would be really cool if that possibility was true, because as one Reddit user suggests, we would not just be getting hints about Sombra, but rather we would literally be helping Sombra get access to Athena.

Sadly, though, what Sombra ACTUALLY meant by past achievements was that players needed to look at the player achievement list for PlayOverwatch.com and find any new details in there, which lead to a strange achievement icon that was hidden within the site data and had another secret message hidden which said: “Damn, not bad. However, I’m getting bored. Lets try something new in the same direction.”

Along with that message, some more cypher text was found which players managed to decode very quickly, and, using the compass directions found in Summer Games video, players ended up finding this corrupted image of Volksya Industries via a url (https://blzgdapipro-a.akamaihd.net/media/screenshot/5552E494-78B3-4CE9-ACF6-EF8208F913CF.jpg). Using the same method of data comparison just with the corrupted Darado image, they found a new message stating: “It seems you like these little games. Why don’t we play a real one?”

More Fun than a Story Mode

So with that said, as players are still trying to figure out different ways to get the third message, I’m eagerly waiting to see what new developments arise from this ongoing ARG, and this entire mystery. And like I mentioned before, I really did believe that Overwatch could have used some kind of single player campaign in order to make players experience the lore of the game a lot better, but with this ARG, I feel a lot more excited and perhaps a little compelled to participate myself since we, as regular people, are taking part in the story, learning more about Sombra as a character, her possible motives, her associations with heroes and villain, and so much more.

There are so many players collaborating, sharing discoveries and new theories on how to unlock these messages that it’s kind of hard not to get caught up in it. I’ve been enjoying these developments far more than I thought I would, to the point where I can completely forgive the lack of a campaign and feel that the game doesn’t need one if Blizzard can continue to release interactive events such as this one. While a campaign would still be nice, the possibilities of how the campaign would end has already been laid out, but this ARG gives off a great sense of wonder as the story is being unfolded right before your eyes, and the audience are the ones taking center stage. We’re not playing as random soldiers or playing in the shoes of one of the many heroes in the roster. Instead, we ARE the story.

How do you feel about the ongoing Sombra ARG? Do you think that these kinds of events are a good enough substitute for a playable campaign, or do you think the a campaign should still be included in the future?