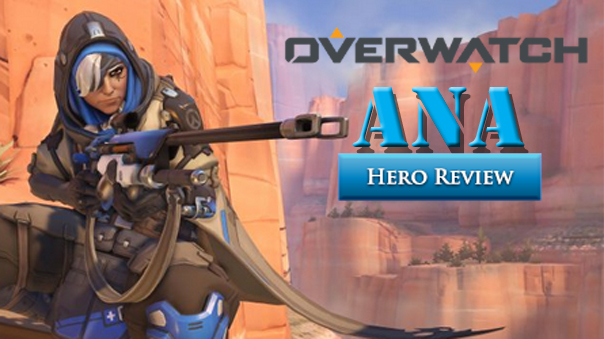 For the past couple of months, Blizzard fans have spent countless hours playing Overwatch. Since its initial release in May, various patches have been released tweaking numbers in an aim to balance the game. There was even a patch introducing the highly anticipated Competitive Play mode. While these patches are great to see, it would be nice to spice up the game with a new hero. Enter Ana, a sniper who can take down enemies from afar while also supporting her time with healing darts. I never thought I would see a long range healer but here she is. Read on to learn more about this interesting sniping healer.

Ana Amari is one of the founding members of Overwatch. She was regarded as the world’s best sniper but hesitated when facing off against Widowmaker. She was believed to have been killed during this mission but survived; albeit with one less eye. During her recovery, she wrestled with the weight of a life spent in combat and chose to stay out of the world’s growing conflicts. However, as time passed, she realized she could not sit by while her city and innocents around her were threatened. Now, Ana has rejoined the fight to protect her country, and most importantly, to keep her family and closest allies safe.

Ana’s Biotic Rifle shoots darts that can heal up allies or deal damage over time to her enemies. She is a long ranged support assassin, an odd combination. Her rifle’s scope can be used to zoom in on targets and make highly accurate shots. While scoped, the darts hit her enemies instantly but hip shots (not scoped) have some travel time. Therefore, while you may not deal additional damage while scoped in, it can make it easier to hit moving targets by eliminating the need to factor in projectile travel time.

She can also fire a Sleep Dart (Shift ability) from her sidearm which renders an enemy unconscious. Like most games, sleeping enemies automatically gain consciousness upon taking damage making it essential to make the best of this opportunity. Small pea shooters will waste the chance of taking down a sleeping enemy and a stronger shot to the head is the optimal choice. Alternatively, this ability is also a great tool for locking down enemies in order to focus on different targets or to distance yourself between dangerous foes.

Or you can simply humiliate sleeping enemies…

Biotic Grenade, her second ability (E), is a biotic bomb that deals damage to enemies and heals allies in a small area of effect. Affected allies are granted increased healing for a short time while enemies cannot receive healing for a few moments. This ability can also be used to heal Ana herself if the grenade is tossed around her; it’s a great way to top yourself off when your hit points are running low. Biotic Grenade is very effective against tanky opponents with pocket healers. Simply shut off their ability to heal and take them down; enemy healers will just be running around waiting for this debuff to expire.

Finally, her ultimate ability, Nano Boost, hits one of her allies with a combat boost temporarily making them move faster, deal more damage, and take less damage from enemy attacks. This ability charges up relatively quickly and is great to break the balance in long battles. If you feel like your team needs just a little push to overcome enemy defenses or shut down enemy attacks, Nano Boost will meet your needs. A lot of times I have been able to Nano Boost an ally, allowing them to run in without fear (or less fear) of dying and focus on tearing down the enemy. It is a great ability to break up a stalemate.

Nano Boost helps give your team the push it needs

As I am sure you have noticed, Ana’s abilities revolve around both dealing damage to enemies while simultaneously patching up allies. As a result, she is like the typical ‘jack of all trades, master of none’ character. In terms of dealing damage, her damage output is not very high and you will have to expend multiple shots in order to take down enemies. She will not be able to take down enemies efficiently on her own and acts more as a long ranged support complimenting your team’s damage. In this regard, a hero such as Widowmaker can easily take the place of an Ana looking to take down enemies.

On the other hand, she is also decent at providing healing to your team but gets outshone by heroes such as Mercy. Ana is able to keep allies who are in the middle of battle alive from afar but her healing is not as high as other supports. There is no doubt that Ana is a strong healer but if your team’s goal is to provide healing efficiently, heroes such as Mercy fit better.

However, the above examples outline better choices over Ana if players are looking to deal damage OR heal. Ana shines when it comes to being able to do a little of both. If your team needs some healing but not a dedicated healer, why should a slot be taken up by a healer which may be running around for half the game without anything to do because your team doesn’t need heals? Ana may fit better as she can sometimes focus on topping up allies while also scheming to take out priority enemy targets. I feel like Ana does quite well if your team is full of tanks who will be running into the midst of the fray. Closer ranged healers may have difficulty staying alive if their ‘patients’ are right in the faces of enemies. Ana can stay far and top up these Rambo Tanks while also helping in the damage dealing department.

Hasty enemies are put to sleep

Although Ana can stay back and heal, if she gets caught there is not much she can do. She possesses no escape abilities and has to simply rely on her Sleep Dart to get away. Sleep Dart is quite hard to aim and can be impossible to hit against fast moving flankers such as Tracer or Genji. With this in mind, while Ana may feel like she is safe far from battle, smart flankers will have no difficulty taking her out.

I was quite surprised to see a healing sniper. We are always used to seeing healers staying close to their allies or at most a medium range. Long ranged healers always sounded over powered as they could keep their team alive without putting themselves in danger. Blizzard did a great job with Ana as she is a long ranged healer but does not feel overpowered. While she can heal up allies from afar, Overwatch features various heroes which are designed to flank and catch out lone enemies. With no ability to escape, Ana has to always be on her heels looking out for flanking enemies. This simple feature ensures that Ana is not just an overpowered healer who will never die.

However, as a whole, Ana is quite underwhelming. At times you can do wonders to keep tanks alive from afar while they bash in the faces of your enemies, but she is not often the preferred pick. If she was fun to play, being underwhelming on the competitive side may be excusable as enjoyment is a good reason to pick up a hero (outside of competitive play). Unfortunately, she is not very enjoyable because while her design is interesting, it doesn’t offer any fun or cool abilities. All of her abilities feel basic and as a result she feels dull. Healers such as Mercy have cool movement abilities and a sniper like Widowmaker also has her grappling hook making her more fun to play. On the other hand, with Ana you will just be shooting your rifle or throwing a grenade from time to time.

I tested Ana on the PTR but she has now arrived on the main client. With a hero as unique as a sniping healer, I can’t wait to see what else Blizzard has in store for us.