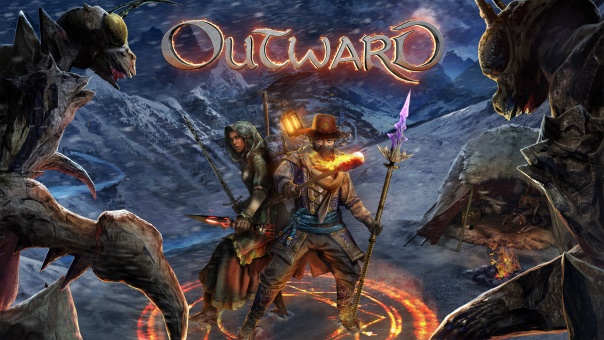 Most survival/open-world RPGs have you playing as the Legendary Savior of the Universe, whether you’re tasked with defeating the Dragons, saving a Princess, or Defeating the Evil Wizard Lich Mega King. Outward takes a different approach, one which is a question I often ask myself when considering writing fiction in my downtime: What if you are not the hero of your own story? The main character isn’t a legendary hero that I’m aware of. In fact, somewhere down the line, someone in his family did a Bad Thing, and he’s paying for it in a Blood Price. The game opens up with you, some ordinary guy, starting with nothing after a shipwreck. You’re gratefully near home, and when you return, you find out that you still owe a lot of money on said Blood Price. So this character isn’t a badass warrior, or an insanely talented magician, or even the Child of Prophecy. He’s a regular guy who is in a pretty unfortunate situation. If you don’t cough up the money soon, the town will take control of the Lighthouse, which is your home. That’s what sets up your character doing all of the sidequests and adventures you go on – making money. It’s a reasonable goal in a fantasy setting, but this path is fraught with peril.

I was not able to raise the money in time, no matter how hard I tried. As a result, the lighthouse was sold and is now a barracks for the soldiers of this little town. That’s okay though because I was far more interested in seeing what this world had in store for me. It’s a very open game, with plenty of places to explore and adventures to undertake. One of the things that this game touted as a feature is that you are well and truly encumbered by your backpack. Having a lot of stuff in it slows you down, and makes combat a trial since you’re dealing with that heavy satchel strapped to your back. Fortunately, you can hold B to drop your bag, in the event you’re about to die, or need to get ready for battle. Once you are unencumbered, life becomes much easier. Well, in the sense that you can move freely – battles are still not easy. You don’t have to go alone though! Outward features splitscreen local/online multiplayer, so you can have a buddy team up with you for this harsh, unforgiving world. You also have to be aware of how much stamina you have, because each attack uses it, and being hungry/thirsty will also have an impact. Most of my fights did not last particularly long – for good or for ill. No matter how often I died, I enjoyed coming back and trying to make something out of my circumstances. It’s definitely challenging, and I honestly didn’t feel like I needed to give up or start over. I just had to run for my life and figure out my next move. 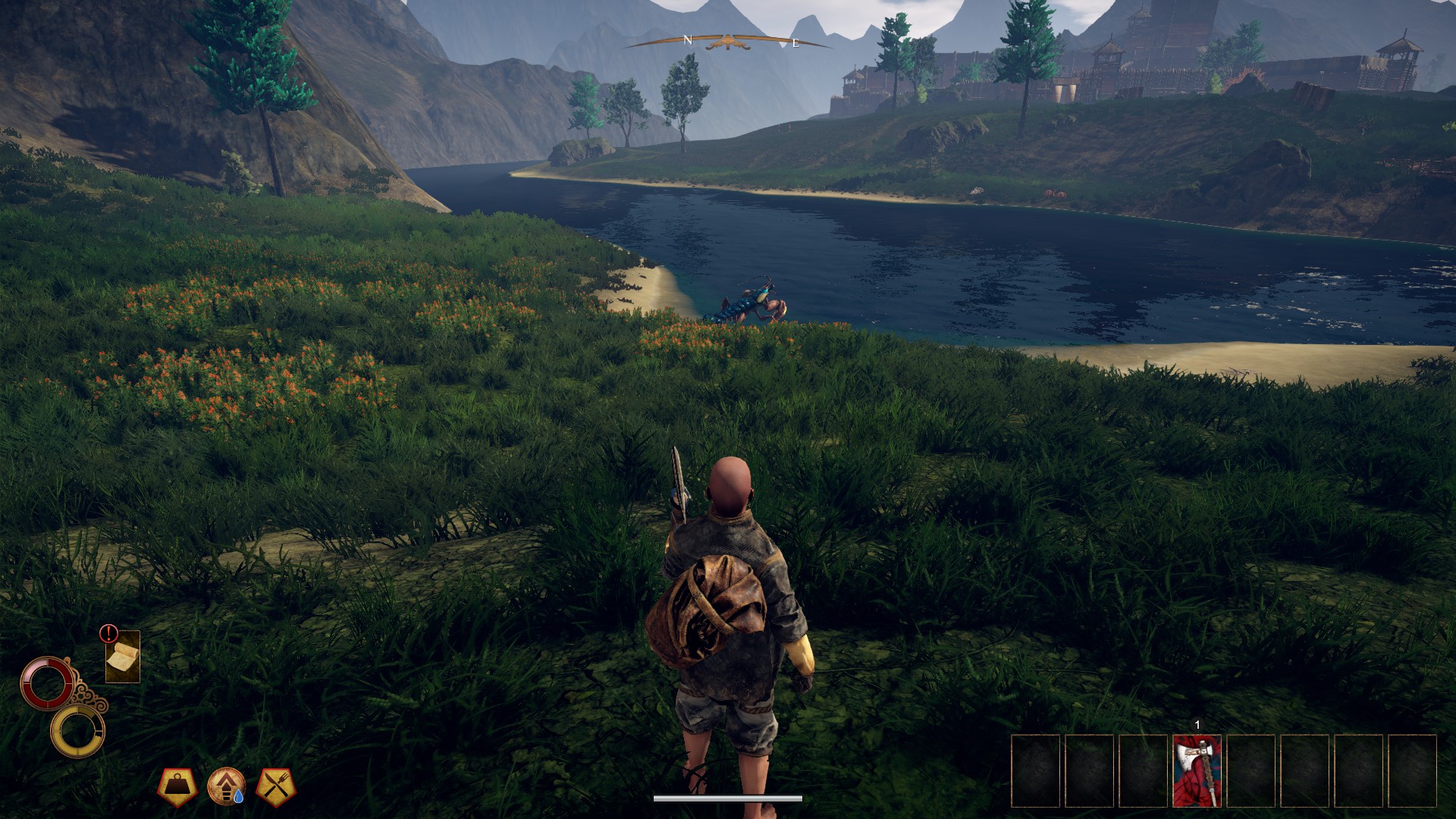 Surely I can handle fighting this gigantic crawdad creature. Right?

Survival is the key. As you progress, you need to eat and drink to keep on going, but food goes bad after a while. Hunger is definitely serious business: when you’re hungry, you lose health 3x faster, so you will definitely want to take time out of your adventuring to farm up some meat, salt it in the cookpot, and have it in case of an emergency. Depending on what type of meat it is, it will last longer or actually less time. You also can’t just drink any old water. If it’s salt water, you need to take it and get it purified (thankfully the town has a water purifier!) so you don’t just wind up harming yourself. You can rest in a bedroom or in a tent to recover health, but doing so in the wild has a chance for an event to occur, so you can take some time to stand guard over your camp to secure your items/supplies. I was fortunate, and nothing bad happened when I just slept in random spots in the world, except that I woke up starving and thirsty. It can be a little frustrating at first to see icons for hunger/thirst/confusion in your UI but not know exactly what they mean for you. Thankfully you can open up the character menu and go to the “Effects” tab.

This is an exciting world to explore, and just because you die (which I did, a lot), it’s not the end of your journey. This is a survival game, but it’s not a permadeath situation. When you die to bandits, wolves, or strange aquatic creatures, you see a brief event pop up. The bandits might drag you back to their hideout and leave you bleeding, the wolves haul you off to their lair, and you have a chance to escape these perilous situations and get back to the adventuring. You might get lucky enough to have Divine Intervention, but that has yet to happen to me. I often found myself battered and bloody, having to find my gear in the dead of night and run away from a camp, hoping for the best. Outward is definitely a challenge, and it blends realism with fantasy in a pretty interesting way. Speaking of being defeated, you have several different weapon styles, and can also learn magic. I focused on using a powerful but slow polearm. Fortunately, someone near the gates of town was able to teach me a weapon skill (which binds to a hotbar slot), but that took up precious money I needed to save my home. I found it wasn’t worth it to stay at this hometown, and instead wander into the world to seek my fortunes. And also buy better backpacks, because what you wear on your back is just as important as what you hold in your hands. 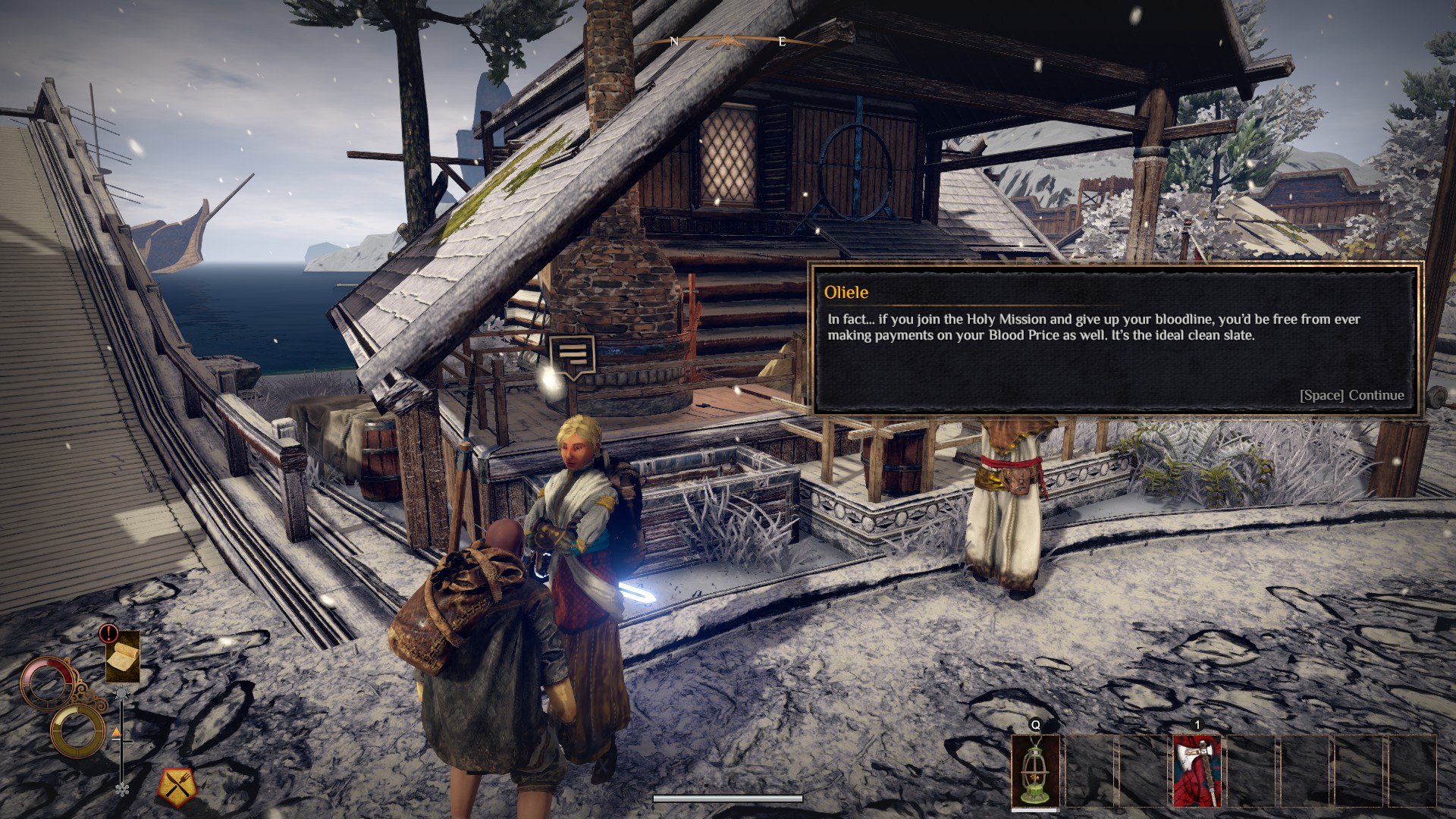 So, here I am. Standing in the snow, with no boots, being pitched the Religious Order lifestyle.

Outward is genuinely an interesting concept. You can set traps when you’re camping for the night, and almost every enemy I battled was challenging. If you get too cocky and openly battle bandits, some of their friends that are nearby might come and help. I found myself lost more often than not though since the map of the region did not show a marker of where I was. It showed all the areas I could go to, but not where I was. I had to just pay very close attention to where I actually was. That could be a design choice though, which I can absolutely understand. This is a survival game after all, and it’s meant to challenge you. A real map wouldn’t show where you are, after all, unless it’s something on your phone or PC. You don’t have those things in a fantasy world, right? You need to wear the right clothes so you don’t catch a cold, and if you’re bleeding out from an enemy attack, you need to use bandages so you don’t continue to bleed/lose stamina.

I think this would be a lot of fun to play with a friend, where two players can develop builds to compliment each other and to be just two pals out in the world trying to survive and thrive. Magic is difficult to cast, but rewarding when you get it, use it, and successfully harm an opponent. Everything weighs you down, including your money. Sure, it’s great to have ten thousand gold or silver, but in this game, you probably wouldn’t even be able to move. Not going back to a previous save file would be much easier than the game’s present system of “wake up somewhere, cold, bleeding, hungry and thirsty”. That’s just another part of the survival title. I do feel like Outward could use a few touches, like the status ailments having clear indicators of what they mean. Visually, it looks like virtually every other medieval fantasy RPG that I’ve ever played, and the character acting is nothing to write home about. But it’s what the developers do with that fantasy world that’s intriguing. Since I spent more time in the world, I would leave reagents like salt and extra weapons in barrels/chests in the open world.  The world of Outward is not an easy one to get by in, but it’s rewarding in its own way. Making my way around with the barest necessities was satisfying. Most games let you carry as much stuff as you need to, but not Outward. It’s refreshing to just be a regular guy, instead of the Legendary Hero. You’re just a guy with a backpack, and a handful of silver, doing what he can to get by. It feels a bit too real if I’m being honest.

A preview code was given for purposes of this review.