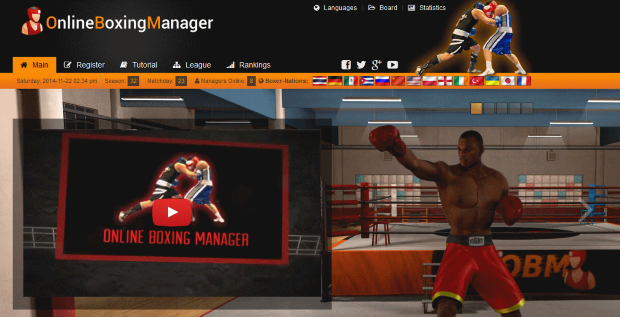 In the boxing online game, the player leads a boxing club and starts the training of young talents. His career starts with only a shabby backyard hall and some seedy guys supporting him. But with a clever training strategy, good fight planning and intensive promotion, he can quickly climb up the career ladder and become one of the world’s most famous boxing managers, hosting several box champions instructed by the best trainers and most qualified doctors a boxing club can have.

Then the managers can compete against other players worldwide in this browser game. Hundreds of players have already been registered for the previous beta version. Several fight types, such as ranking, league, friendly and tournament fights are available. The game is completely free of charge and can be played just by using a regular web browser. Developer
Mario Kaufmann would like to make the game more attractive for top-level players with the current release. The 31-years old creator of the boxing game declares: “When we started to include boxing leagues into the game, we wanted to motivate players for longer times than just a few seasons. With the new features of the OBM Champions League, the league modes
have become even more attractive.”

Several updates are already planned for the boxing online game in 2015: Upcoming features include animated fights and more strategy-based features for finance and sponsoring.