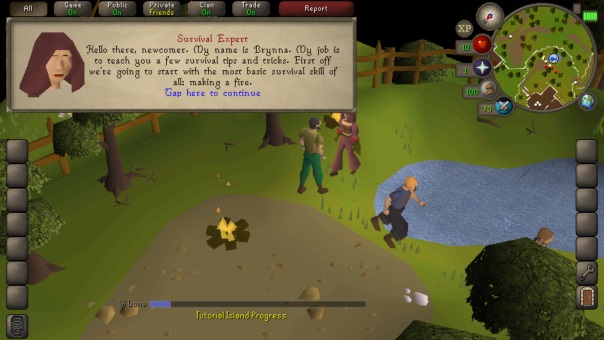 2018 appears to be the year where my horizons become more broadened; it’s pretty fascinating, I have to say. I did not really play Old-School Runescape when it was growing, I was more of a MUD fan. I was still busily logging into UOSSMUD every day, and the MUD I co-ran (Genesis). However, on Monday I took my first serious trip into Old-School Runescape, with the help of some of my friends over at Jagex. There’s something special here though, in an MMO that you can play on your PC anytime you want, and if you need to get up and go, whether it’s to spend time with family in the living room, traveling in the passenger seat (don’t play and drive, friends), or leaving for a trip, you can immediately pick up and resume where you left off. It’s such a cool concept, and Monday’s trip into the world of Runescape was certainly a pleasant one.

I don’t really like going into an event blind if I can help it, so I try to do a little research or early gameplay if at all possible. So I began the trip to Tutorial Island a few hours ahead of the event. I needed to see for myself exactly how it controls and plays, and while it doesn’t look as pretty as the current Runescape, that’s the idea! This is the original Runescape that thousands if not millions fell in love with so many years ago. This has been in the works for a while, and while one or two PC MMOs are looking towards mobile (Final Fantasy XI is a prime example), it’s paramount to be first-to-market. Old-School Runescape Mobile offers the complete experience, and all of that wonderful adventuring and story-based questing is here for fans of the MMO. I love being able to look at more cross-platform gaming, especially in the MMO market, and Old-School Runescape did not disappoint.

There’s no real way to tell if a character is on their PC or on their mobile, and I don’t think there needs to be. Touch controls work pretty great for Old-School Runescape Mobile, and I was so glad to see that. Want to farm ore or wood? Just click the node, and let it go to work. Ready to fight something? Touch it and you’ll walk towards it and do battle. Want to fire your arrows? You can totally do that too! Newcomers/players have a very detailed Tutorial Island to go through, and it won’t let you do something you haven’t been taught yet. It goes step by step to get you ready, and especially if you’re new and on mobile, you have a fair bit to learn. This was great for me because I really didn’t know what I was doing. However, now I know everything I need to get started in Old-School Runescape if that’s my wish. I just might, too! It’s important to know as many things as possible.

Right now it only seems to be available on Android, which is just fine for me, because I have a pair of Android phones. You can register interest on the site below for iOS users, to be notified when that testing goes live. However, my S9 is in need of repair, so I played on a Note 4. But this is key because it’s an older phone and works great with this. So Old-School Runescape fans do not need to dread having an older model phone. They also pointed out uses a very small amount of data and is pretty light on battery usage too. Sadly, it won’t install on my Kindle Fire, but I’m hoping that’s something for the future. It works smoothly on my older phone, so I’m reasonably sure it will do great for everyone. I played for a good hour on my Note 4 and it barely dented my battery. All in all, I was very happy with the presentation and how easy it was to pick up. Fans of Runescape have a lot to be excited about, and Old-School fans especially! The full Old-School experience is here, and if you have an Old-School Runescape membership, you can play it right now! If you’re a member, I highly encourage you to check it out!