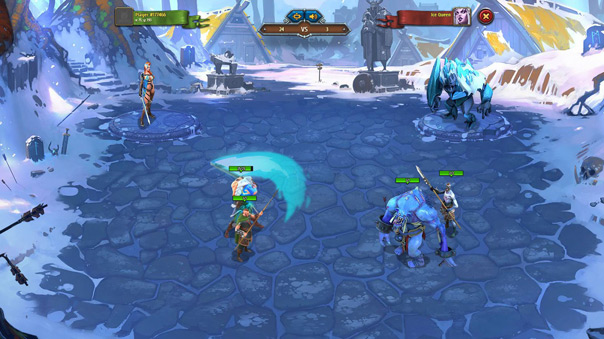 I’m no stranger to the realm of Vikings. Especially in the genre of strategy gaming. So here I am again in Plarium’s latest, and in my opinion, best looking game yet, Nords: Heroes of the North. Right from the get go you’re bombarded with the more comical narrative differentiating it from the rest of Plarium’s line-up. As you might expect going in, you’re king of another stronghold yet you have no idea what the heck you’re doing leading the kingdom. Your skald does though, and is willing to teach you the basics without even judging you harshly for it. Before you know it, your feet will be off the ground, your troops addicted to ale, and a world of plunder will be taunting you with the possibility of conquest. Rally the Viking “scouting parties,” as its time to jump into Nords.

I went into Nords with low expectations. After reviewing games in this genre for the past four years, I was expecting the usual gambit. Weak narrative, basic tutorials that explain the stuff any dolt could figure out on their own, and then a confusing world afterwards with no real direction to guide you. End result? Boredom. Nords does it a bit different. The narrative is hoisted above the rabble with top notch voice acting (for the important stuff anyway) with jokes that hit on point. The menu is streamlined and easy to navigate. But the overarching style is what sells it for me. While the main race may be Nords, the rest of the world carries a fantasy vibe with Orcs, Elves, Frozen Zombies, and the like. Depending on your champion, your whole stronghold will evolve and look quite differently, and all variations offer some of the best looking visuals in the free to play segment of this genre. 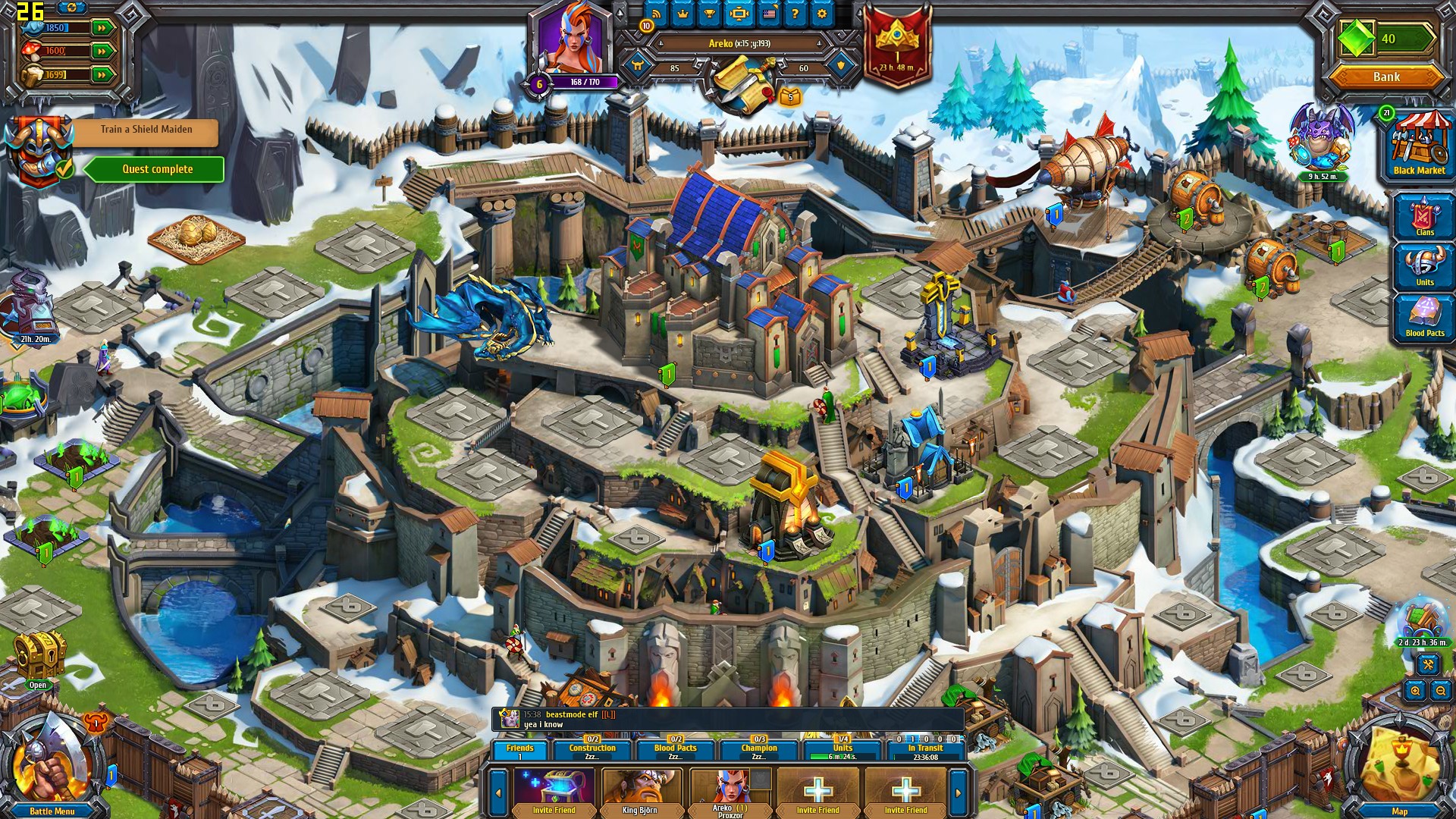 Some serious effort was put into city visuals.

When you have done all the basic steps needed to get your production flowing, you can go outside your gates with an army to attack big beasts, or perhaps even a fellow player. You are mostly placed around other new strongholds to make it fair, with the kings protection for the first three days so you don’t log in for the second time to see all your creations burning. This means you are safe from the higher leveled players, but don’t forget that this game requires time and you have to spend it wisely to stay around the same levels or perhaps even higher than your ‘friendly’ neighbors.

This is primarily done by upgrading your production and troops, slaughtering everything that comes on your path be it friend or foe (everything is XP on the spreadsheet!), and gathering more resource types than you’d expect in a free to play game. All this combines to level your account up, unlocking bigger, better, and not uncommonly drunker things. Advancement in the game is expectantly slow paced, though not to the punishing extent of some of the newer offenders like Game of War. Just go in aware that you might be waiting minutes to hours to train and build units and structures. There are minutes or hours to train or build. While this means you cannot play this game all the time, you can log in regularly to either send you army to find some beast, or to go to your neighboring strongholds to do some good. There are also a series of quests you can follow that will give you some special rewards. 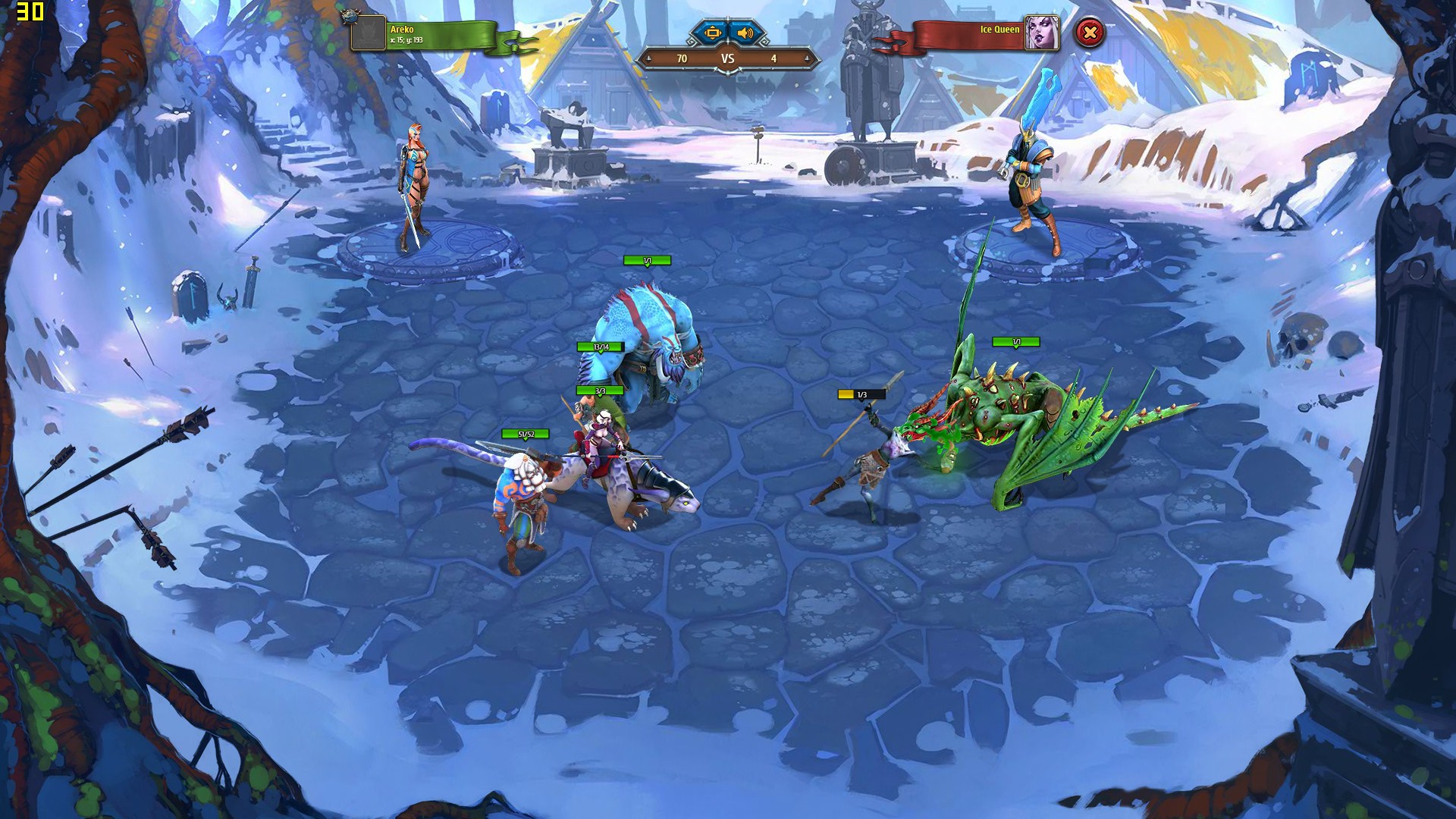 When wait times are long, there's always tactics combat to pass the time.

Other players obviously play a big role in this game. Since you cannot conquer the world alone you will have to join up with a clan. There are a lot of player owned clans that all have their own ranking and requirements. If you find a clan that suits you and get accepted after throwing your request their way, you’ll be assimilated into their forces. This comes with a nifty personal chat room. You also are able to get an Obelisk by being in a clan. Since acquiring them is such an enormous task of scale and difficulty, its pretty much impossible to do any other way outside of clan support. You can conquer and hold Obelisk to expand your territory over Shingard, the land of this game. These Obelisk are usually defended by strong monsters and bosses so being in a clan in control of one gives quite a feeling of achievement. If you are in control of an Obelisk you will have to pool together resources with your clan as a type of payment for holding the Obelisk.

To keep a never ending supply of things needing upgrading, you can expect to return to your existing buildings often to empower them. Each level will either bolster production scale, or allow you to produce stronger units requiring additional resources. Some buildings are reliant on others in this manner to operate efficiently, so you’ll find yourself slowly upgrading your full base as time passes to get the most out of everything. Another resource drain comes in the form of defending units, especially siege turrets or cannons to get the most bang for your buck. As you can expect, all these inconveniences can be done away with for a price. Cannons or other siege units unfortunately cost Emeralds. Emeralds are the in game real money currency that you can get by either playing the game, or by throwing money at your screen. 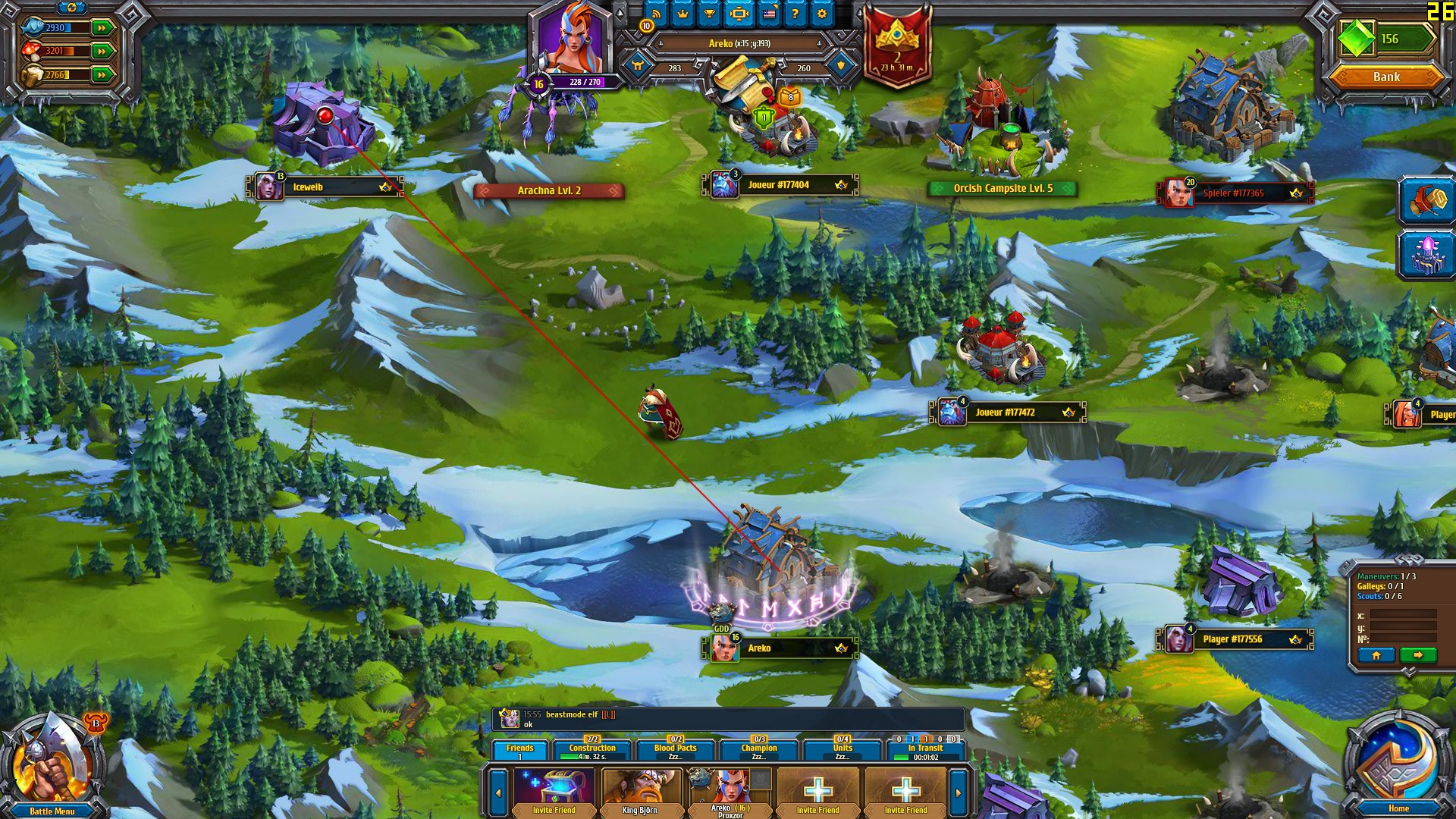 Finally a world map that doesn't cluster everyone in like sardines.

While I still enjoy playing this strategy romps from time to time, lately I’ve felt burnt out as the genre seems out of new ideas. Each and every one seems to just rehash on what worked before them, sometimes offering even lower quality products than the last. With that said, Nords is the rare exception to raise the standards and join the echelon of elites. The current style is really appealing, complimenting the humor and simple to learn game mechanics. I also joined a player made clan right from the start filled with a bunch of awesome people that didn’t mind teaching a new recruit what’s what. Once you start playing you’re in the game, and you have to remind yourself that your neighbors are eyeing the same resources, and even your base, with the same greedy eyes as you. Unleash the power of your micromanagement skills and show them who the better leader is!