New Event, Upgrades, and Tournament in GTArcade’s League of Angels

GTArcade has announced the newest features for its version of League of Angels. A new Group Buy event will allow players to receive substantial discounts on purchasable items, heroes and mounts can now be upgraded, and players can participate in the epic Cross-Server Tournament! 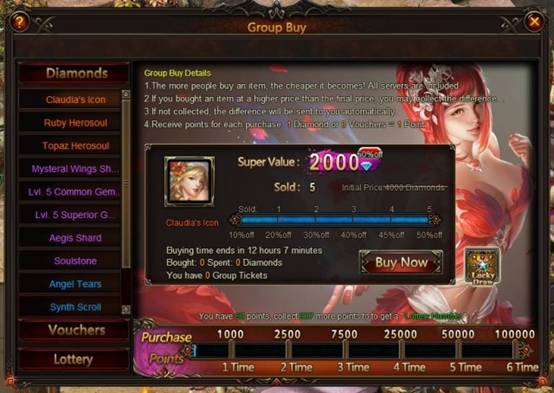 In the Group Buy event players can make Diamonds and Voucher purchases, meaning both non-paying and paying users can reap in the discounts. During the event, the more players who purchase the same items, the higher discounts they can get for the items. The discount can even be as high as 50%! Furthermore, the first time each day a player buys each specific item in Group Buy, they will win a chance at the Lucky Draw where great prizes such as Group Buy Points and Vouchers can be won. There is also a prize that gives a 100% refund on the player’s first purchase of the day! Last but not least, players can utilize their gathered Group Buy Points to enter a bonus lottery. After using Group Buy Points to enter, players choose a number from 1 – 999 and await the end of the event when 1 lucky number will be drawn. The players who have their lucky number drawn will win 5000 Diamonds! Those who do not win the Diamonds will receive Vouchers according to the amount of times they entered the lottery.

The Hero and Mount upgrade functions allow players to further enhance their battle party and gain an edge over their opponents! Bless Stones are the new items introduced to assist in the upgrade of Heroes and Mounts, allowing the player to raise the “Bless Points” of each Hero or Mount. Every time the player uses a Bless Stone, the chosen Hero or Mount has a chance to upgrade. The chance of upgrading is based upon the amount of Bless Points the Hero or Mount has. As Bless Points will be reset at midnight, players must plan their day to gain the most Bless Points before the day’s end! 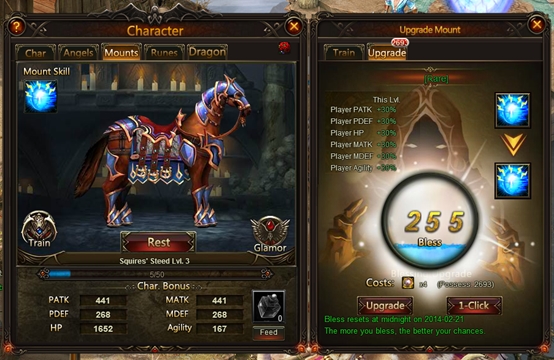 The Cross-Server Tournament places players against each other in an epic battle for amazing prizes! Participants first enter the Group Stage where they are given 10 free attempts to challenge other players. Each victory will award the player with points that can be used to claim prizes of Gold, Prestige and Warrior’s Marks. The Top 100 participants from the Group Stage will proceed to the tournament stage where the true fight begins! Participants may fight numerous times each day, gaining and losing points for each victory and loss. Exquisite prizes await those warriors that are strong enough to reach the top of the tournament rankings! All tournament participants will receive a personal gift pack, and high ranking participants will receive special exclusive prizes!

Two lesser additions, the Dragon Cave and the Guild Boss have also been added. Players may raid the Dragon Cave to gain Chest Shards that can be used to synth Soulstone Chests and Bless Stone Chests. The Guild Boss can be fought by all Guild Members and upon defeat will reward members with substantial rewards!