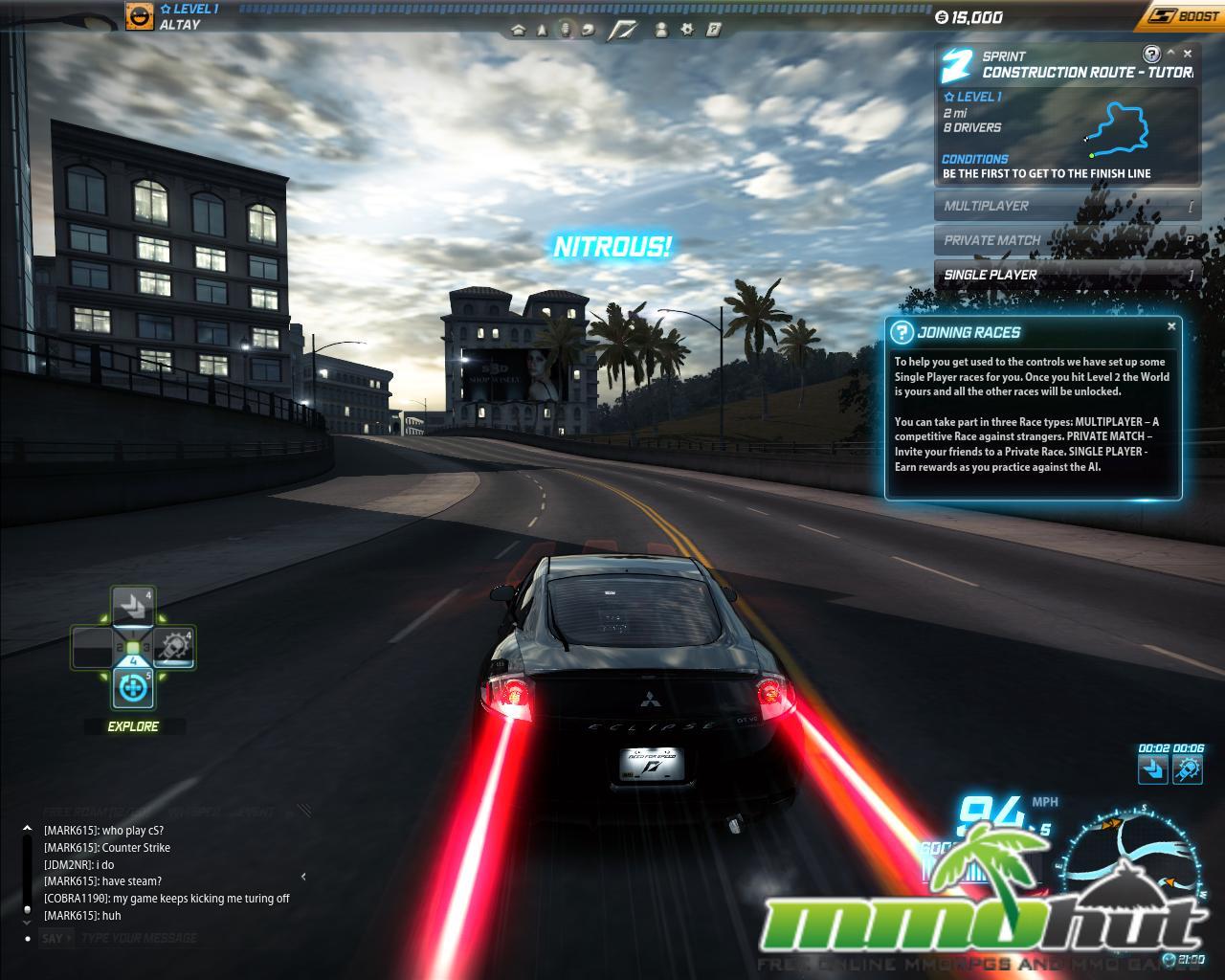 Need for Speed World is the most innovative entry to the highly successful racing franchise to date. Not only is it the first MMO game in the series, but it is also accessible for free. Set for worldwide release on July 20, 2010, Need for Speed World has the same high quality graphics and gameplay fans have come to expect of the series.

Electronic Arts has been expanding its online offerings and a single account with them now gives players access to a variety of free to play games including BattleForge, FIFA Online, Tiger Woods PGA Tour Online, and the browser based Lord of Ultima. For those who already have an EA account, jumping into Need for Speed World should only take a few minutes. A small 5mb download is enough to install the game, but a long patching process awaits players on their first login. Accounts have three driver slots which is more than enough since players can own multiple cars on a single driver.

Can’t Have That One, Try This One

Character creation is simple enough in Need for Speed World, players simply chose a name, an avatar, and their preferred starting car. Cars come in three tiers with each tier having a higher level requirement than the previous one. New players may only chose from a select few tier 1 vehicles as the rest have a level requirement above level one. It’s not entirely clear why the selection menu includes cars that players can’t even chose yet perhaps its just to taunt them. The cars that are available include the Mozda Speed 3, Mitsubishi Eclipse GT, Nissan 240SX (S13), Nissan Silva (S15), and Toyota Corolla GT-S (AE86). Each car has four color options and a different distribution of three stats: Top Speed, Acceleration, and Handling. New drivers start with $35,000 in cash but their starting car will set them back $20,000, leaving a net $15,000. This starting money can then be used to further customize the color of your chosen vehicle, but more on that later.

Like Drift City and RayCity, Need for Speed World has a large, persistent world to drive around in. New players start in the city of Palmont which is from Need for Speed Carbon. The city of Rockport, from Need for Speed Most Wanted, is also part of the game. More cities may be added in the future, but even with just these two, the game world is massive. The graphics surpass everything in the MMO racing genre to date, including the lobby based Project Torque. Cars, roads, and the background all look realistic and there’s even a full night/day effect in place. Controls are simple; players have the option to use either W,A,S,D or the arrow keys to move. There’s no formal tutorial, but that’s a good thing. Menu prompts and a built-in guide are available for those who want to read up on specific topics. The world is populated by NPC cars, mailboxes, trees, and other obstacles to crash into. Unlike Drift City, players cannot collide with one another, however. Player controlled vehicles simple pass right through each other while exploring the world.

Gameplay in Need for Speed World is split between roaming the persistent cities, and actually racing against players (or the AI) on instanced sections of roadways. To participate in a race, player must make their way to specially marked points on the map. These points are marked on the minimap, on the main map (click m to open), and visible on screen by floating blues signs. Players can travel to these locations manually, or open up the map and click on them to instantly teleport to them. Once in the right spot, players can chose whether they want to play alone or with up to seven others. For multiplayer games, players can chose to enter a public matching making queue or set up a private game and invite other users individually.

While Need for Speed World strives for realistic environments and vehicles, it does contain power-ups to spice up gameplay. There are no missiles or landmines like in UpShift StrikeRacer, instead drivers have access to a variety of skills. These skills, known as power-ups, fall into three categories based on when they can be used. The most common are Race Power-Ups which include skills like Nitrous (boost), Traffic Magnet (summon AI cars to hinder the player in first place), and Slingshot (catch up to leading player.) Pursuit Power-Ups can be used when players are fleeing from the cops. Evading the police is a fun minigame in Need for Speed World that starts when players are caught speeding or crashing into vehicles near a police car. The pursuit ends when the player is cornered by police cars and ‘busted’, but until then the mission is to cause as much damage to the cops and civilian infrastructure as possible. The final Power-Up type is Explore, or Free Roam. These are skills accessible while traveling the game world. 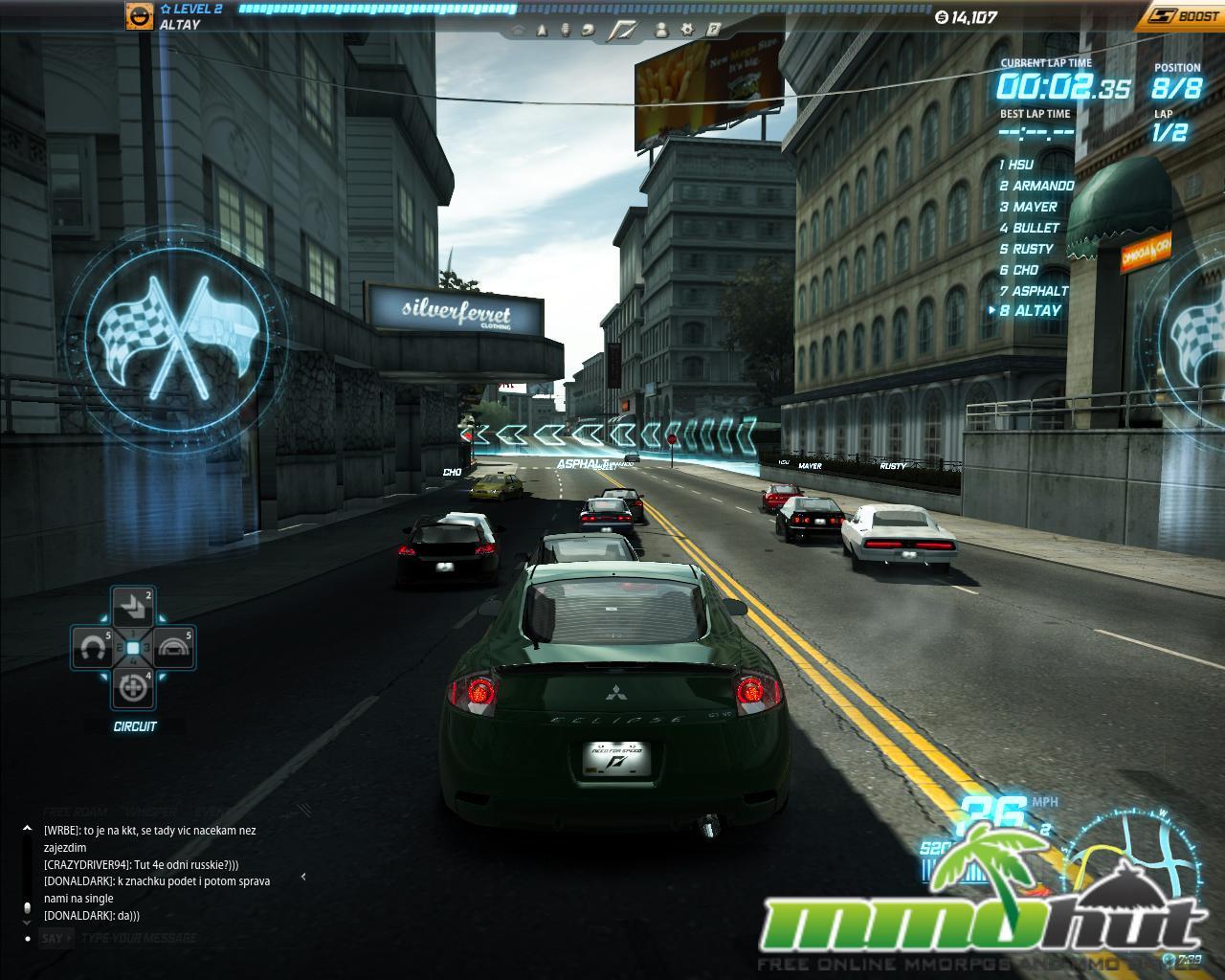 As players complete races, they’ll earn reputation and level up. Leveling up unlocks new event locations on the map, gives access to new vehicles, and much more. Players will also earn cash by completing races which can be used to customize the appearance of vehicles and to purchase new hardware packages. Customization is done at each player’s ‘safehouse’ which acts as a personal garage. Each car has at least half a dozen packages to chose from, with each package having a different effect on the car’s stats. Like most everything else in Need for Speed World, packages come with level requirements. The appearance customization is pretty in-depth, players have a complete color palette to play with and can chose a different color for each part of the car.

Need for Speed World is a solid game from day one, but EA undoubtedly has plenty in store for the game with future updates. There were some graphic glitches and disconnect issues during open beta, but these are sure to be remedied. A more pressing concern is the lack of activity throughout the city . A persistent world is usually preferable to a lobby based system, but more could be done to keep things interesting. The police pursuit feature is a good start, but GTA style taxi, delivery, and other missions/quests modes would be a great addition. ‘World’ already incorporates geography from two previous Need for Speed titles, but will it add features from upcoming NFS games like Hot Pursuit?

Need for Speed World makes a great racing game. It is simple to pick up and play, the visuals are smooth and realistic, and the leveling system adds a sense of progression. Access to some features will require payment, but the game can continue to be enjoyed for free.