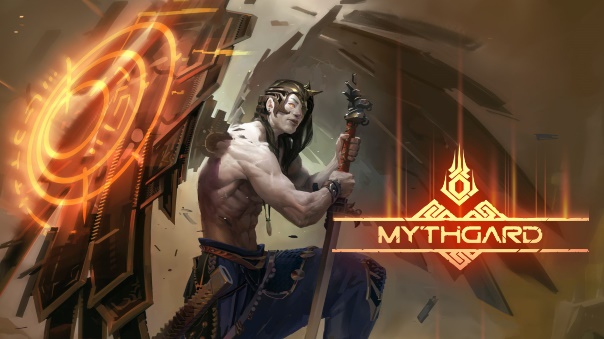 I love a good card game, and if you’ve been following my work, I’ve been playing them since the 90s, and covering them regularly here on MMOHuts and OnRPG. My very first review for the company was a card game, funny enough. Mythgard is still in the Friends & Family Alpha phase, so this is less a review, and more of a look at how the game works and its state so far. Mythgard is set in a modern world that blends fantasy with future tech, sort of like Shadowrun. Instead of opting for factions that have their own philosophy and agenda, the cards are broken into colors, and though each color has its own style of cards (races, abilities), they aren’t solid factions. A good example is Blue, who are primarily Norse in nature. There are tons of Valkyries in the Blue color, but there are also Trolls, Wolves, and Undead. So each color has a theme, that’s about it. In this story, it does feel post-apocalyptic, and the gods seem to walk alongside men. 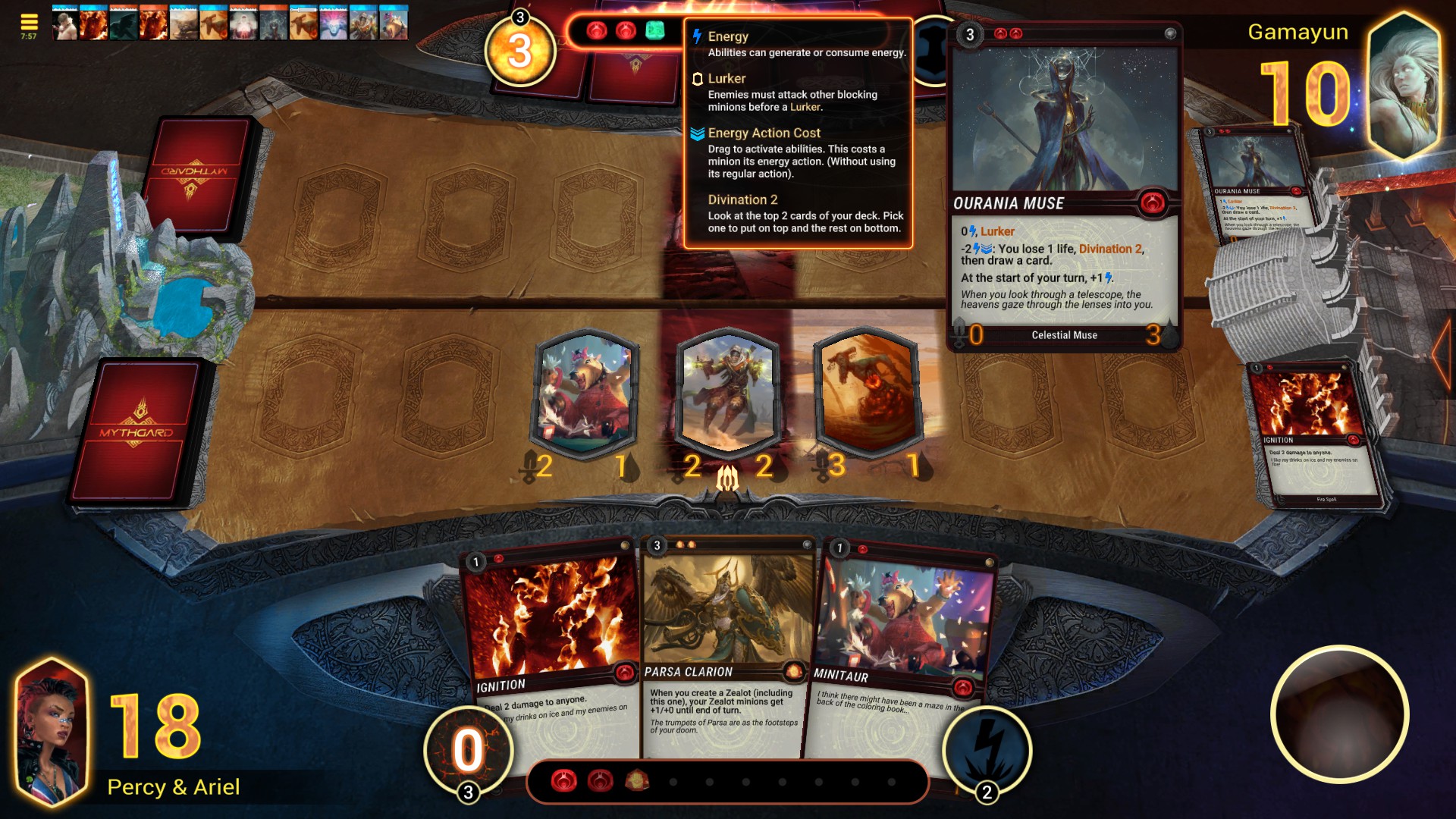 Learning the new jargon is key to success in any CCG.

Anytime a new CCG comes out, people immediately look for similarities in other games, to yell “This is a clone of Magic/Hearthstone/Eternal!”, and while there are some similarities, this is common for CCGs, and not a negative. This mostly comes in the form of the keywords for the game. There are a ton of keywords in Mythgard. Keywords are mechanics for cards (creatures typically) that act as special powers. There are some new ones that I haven’t seen, or at least don’t recall seeing in other games. Fragile is a good example: Fragile makes the targets take x extra damage, where x is the number of Fragile. There’s also Slayer: Slayer deals x extra damage to minions. So a lot of these keywords will feel familiar, that makes the game just that much easier to get into. This is good because there are a ton of tactical possibilities in Mythgard.

Mythgard does not use land cards or automatic mana generation, like other games I’ve played. Instead, each card has a gem type on top of it (top left). This acts as a casting requirement, in addition to a mana source. During your turn, you can “burn” a card, which puts it back on the bottom of your deck. Whatever the color of the gem(s) is, that’s what gem you produce to be used in mana production. This is similar to Eternal’s faction system, only you have to use these gems when casting a spell. This burned card also produces generic mana, so if a card has a 4 casting cost and two yellow gems, you need 4 gems free, two of which must be yellow. This means you have to think through your turns pretty carefully and consider what cards you don’t need right away (or might not need in the near future). This makes card draw incredibly powerful in Mythgard – the more cards in hand, the more options you have for mana generation. 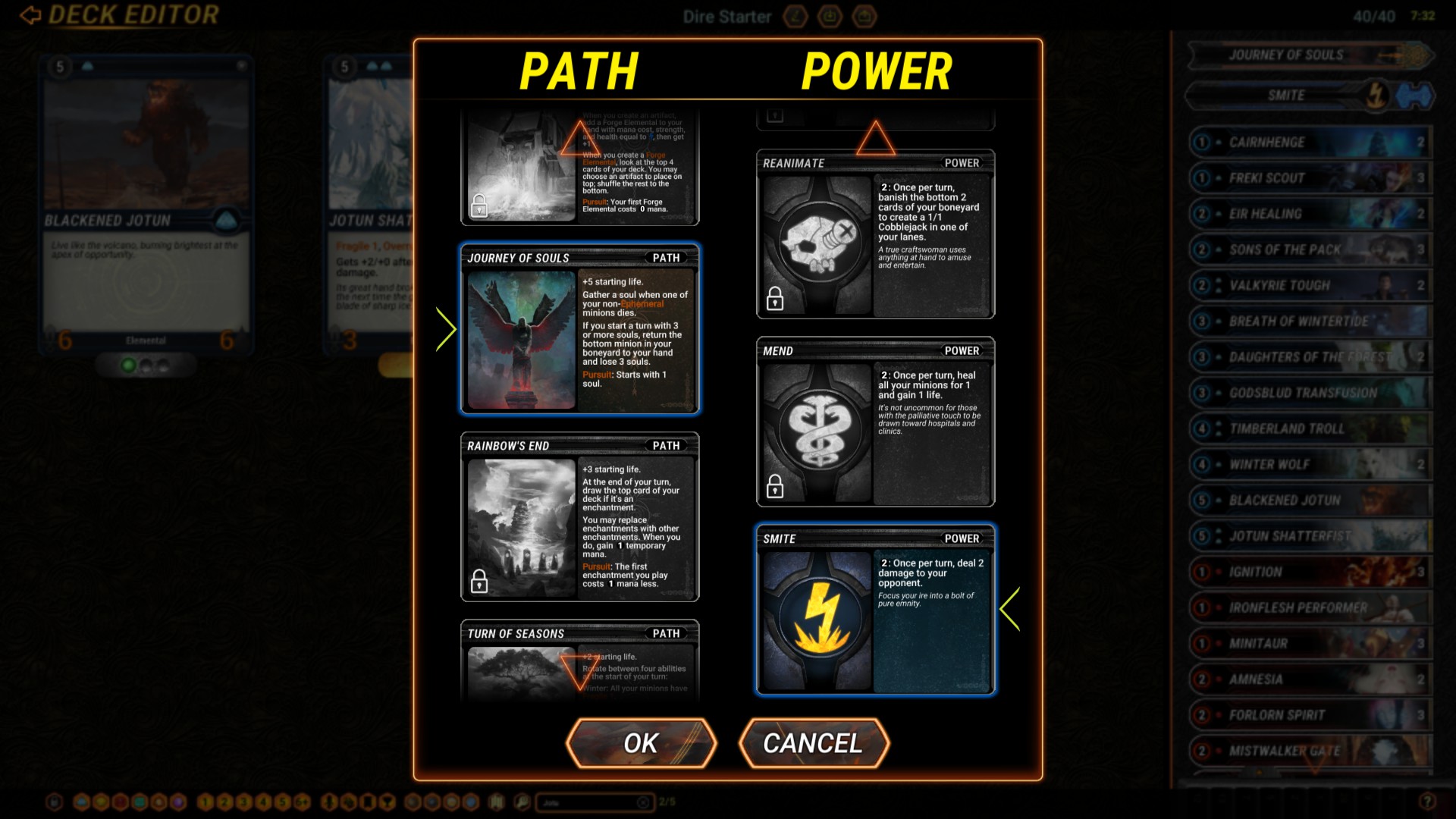 Paths and Powers is a fun way to add creativity to deck strategy.

One of the positives here is that the deck options are pretty limitless. You can run a mono-colored deck, or you can run three/four colored, but the more colors you have, the further stretched out you are, and the more difficult decision making goes into gem generation. Personally, I’ve had the most luck with balanced three-color decks, especially when I’m playing a Control style of deck. So all 40 cards in your deck matter, and this game has quite a few card types to go with it since there are no land cards. Here’s a quick breakdown of card types.

Each player starts with a variable amount of life. I say variable because there are “Paths” that affect your starting life. Paths are unlocked by leveling up and going through the story and are passive/active effects that adjust how your deck plays. They can increase or even decrease your starting life total, and each has its own powers. Turn of Seasons, for example, gives +2 life, and you rotate between the four seasons during each of your turns. Each season has a power, so each deck will have one of these Paths, and a Power (such as Smite, Imbue, et cetera, that can be used once per turn, as per Hearthstone deck leader powers). So your Path will depend likely on what kind of deck you run, and while these don’t offer anything insanely overpowered, they offer yet another way to customize your gameplay and creativity to the gameplay. I love Paths as a feature, but it might be neat to have a ranked or casual mode where they aren’t permitted (but honestly, there are enough good modes for Mythgard).

One of the things that I both like and don’t like is combat. Minions can attack the first three lanes in front of them (unless it’s a side lane, then it’s two). But if an enemy has a minion in one of your minion’s available lanes, they can’t directly attack your foe, unless those other creatures are dealt with first. With that in mind, why are there Defender creatures in the game that can’t attack and must be destroyed? This confused me a little, and while I like that there are creatures that can’t attack, perhaps a rename to make it seem less like “you can’t attack unless this is killed first” when you already can’t do that? That’s just some food for thought. But there are so many different ways to approach your matches though, and I have a feeling deckbuilding for this game is going to be wild when it comes out. The game itself is very solid and well put together, so I’m not sure how this is still in Alpha. I didn’t experience any bugs, and matchmaking felt good. Perhaps they’re going to add more cards/balance some of the current ones? That would make sense. There are absolutely tons of incredibly powerful creatures in this game, and that can always be adjusted in testing. But speaking of creatures, Mythgard, despite doing so many things I enjoy, has one of my least favorite game systems: card crafting. 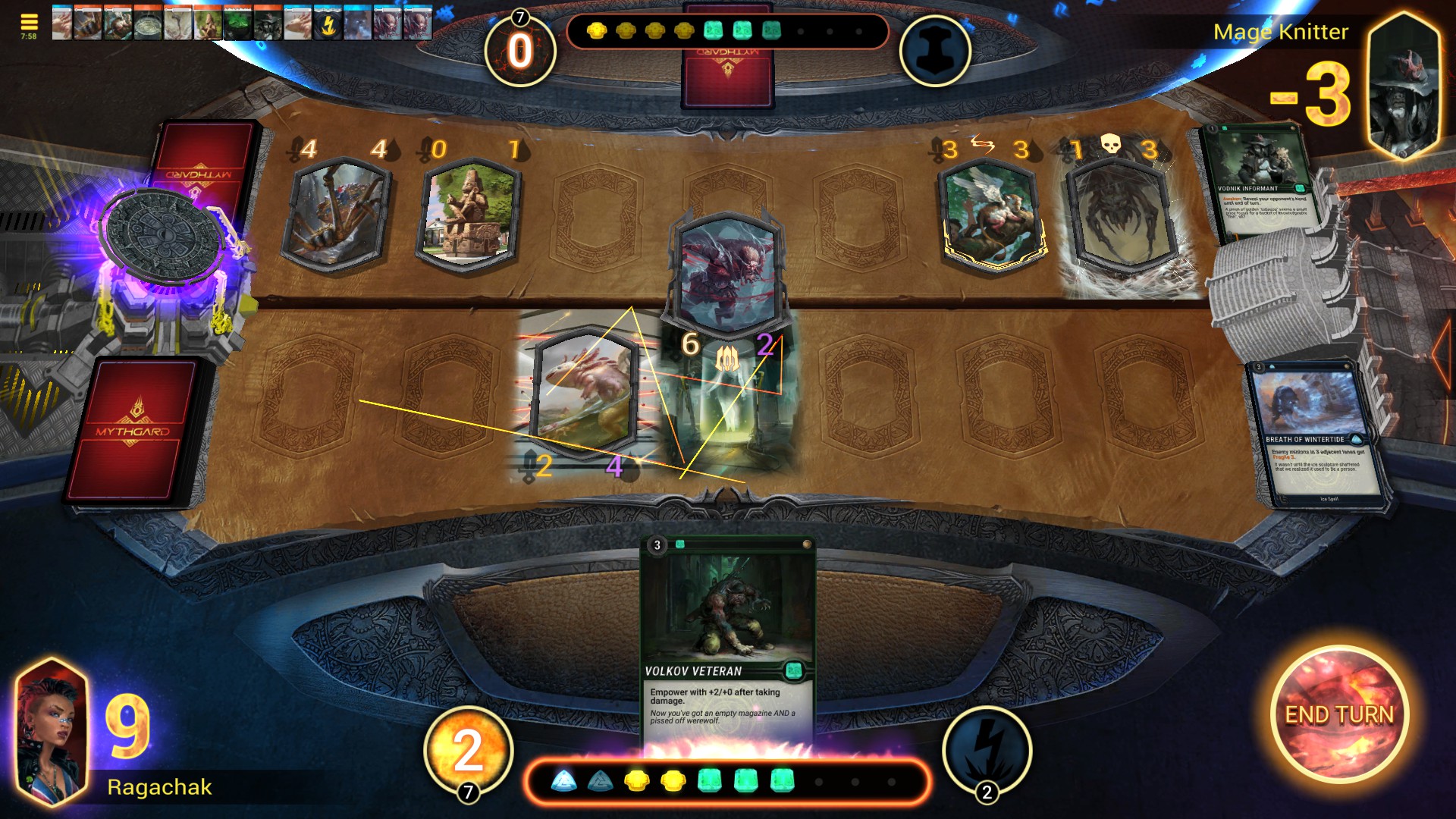 The board might seem busy, but it's no more complicated than any other CCG.

Perhaps I’m spoiled by MTG Arena’s Wildcard system, but dust/card crafting just makes me think I’m going to get nothing but cards I don’t need, so I can make 20 dust, and after a few weeks I can make that one rare I need to make my deck work. That’s tedious, and it’s frustrating. Few systems disappoint me more than dust systems. I’m not suggesting I have an answer to do this differently, and as long as there are options to build your collection other than crafting – which Mythgard does do, it’s not entirely a soul-crushing experience. I do however stand by loathing card crafting, especially rare cards. Right now the rarer cards cost around 500 a pop to make. In deckbuilding, you can have 4 of a common, 3 uncommon, 2 rare, and 1 of a mythic card. So at least you don’t need to make 4 of each card. While I hate card crafting, I do appreciate that you can only have a smaller amount of those hard-to-get cards, meaning you spend a bit less on crafting as a whole.

Mythgard also has a slew of game modes! You have a single-player campaign, which helps you learn deck-types, what cards do what, what synergizes well, while also telling a compelling story. I’ve enjoyed the story so far, and it was a good way to get more cards. You have a PVE draft, a PVP draft, PVE duels, PVP duels, ranked, and what might be my favorite concept (that I want to see in other card games) 2v2! Yes, you can have 2v2 duels, where players share a life total but have their own decks, graveyards, hands, et cetera. This mode has 13 lanes (one shared lane, then 6 lanes on each side of the field). It’s beautiful, and it’s a bold move. This makes me hope that when this game blows up, they’ll do 2v2 tournaments. Those could be very exciting to watch. Not to mention, the music is beautiful, and so is the card art. The card art is so good, that their art stylings take up most of the UI’s basic screen. This game is still in Alpha, and can (and likely will) change as time goes on, but it felt very solid and ready to go if you ask me. 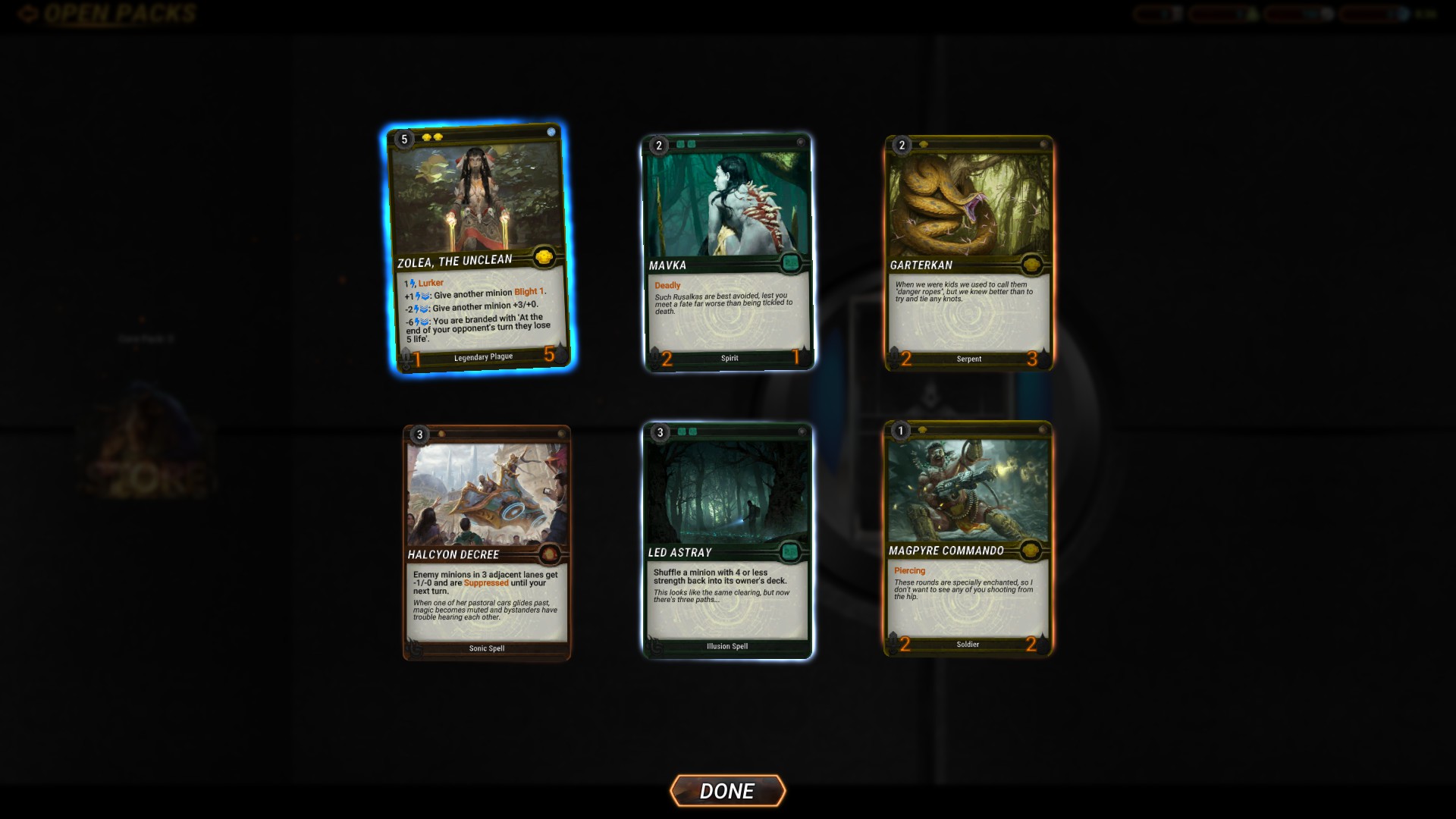 There are SO many good cards. Perhaps too many? Nah...

This game isn’t perfect, and there are some minor nitpicks I have. The UI for your deck collection feels very small (outside of actual duels), and cards of a color not being default sorted by rarity really grinds my gears. I also don’t understand the “Bonus Coin Pool”. It looks like once you run out of that coin pool, you can’t gain any more coins per day, but it’s a pretty generous number, and it grows when/if you don’t gain any coins over a few days. This is just a convoluted system, and instead, perhaps you could just gain coins x amount of wins in modes a day. It just seems needlessly complicated and wasn’t mentioned in any of the tutorial content that I can recall. Other than these little things, I feel like Mythgard is in a good place, and is an incredibly fun card game. It’s easy to get into, and of course hard to master, as all good card games should be.

There’s a lot of intricacy in the deck building, but you can definitely still just stack one color, build some janky nonsense and have fun. I don’t have a lot of real serious complaints about the game, because everything genuinely felt good. The monetization seems fair, with 20 bucks getting you about 16 packs. Almost every card has useful abilities – I can only think of a few creatures off hand that have no powers! The ones that don’t tend to be pretty beefy, thus, still useful. This makes me think that virtually every card in this game has a potential use. I’ve played more than one card game where I think a card is just useless, but cards in every rarity are solid and useful in Mythgard. This is probably due to the higher rarities having restrictions on how many of each card can be in a deck. This means those commons/uncommons need to be worthwhile, and boy are they! There are a few cards that I balk at, but that’s because they don’t fit my playstyle. They still have a use, and that’s important in the grand scheme. When more people get access to Mythgard, I think it’s going to blow them away.

Packs were provided for purposes of this review.