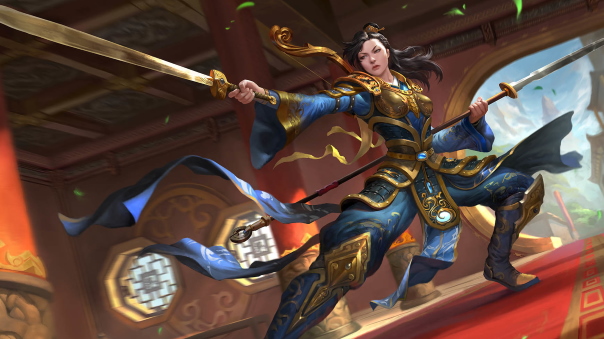 Mulan, The Ascendant Warrior, is now available in SMITE. This melee fighter is the latest addition to the Chinese Pantheon, and the first SMITE character to ascend from human to God utilising her wide array of weapon skills and new divine powers to take down even the mightiest deity.

The story of Mulan is known to many; a legendary warrior who deceived the Chinese army by posing as a man in order to take her father’s place. Hua Mulan went to great lengths to keep her disguise secret, whilst rising through the ranks to become one of the most skilled generals of her time. Even after her secret was discovered, her unquestionable prowess meant her story was told far and wide. Humanity began to place their faith in Mulan – and it’s this faith, and her legacy, that will see Mulan take her place as one of the immortals of this world.

With the world falling ill due to the fighting of our Gods, the once healing Jade crystals of China have become corrupted, hurting the countries people and the very land itself. Mulan, refusing to let her people go unprotected, has tapped into this new divine power granted to her by the faith of her loyal following. Their prayers for a hero have manifested in Mulan, giving her the ability to challenge the most powerful figures in the universe.

This new power follows Mulan onto the battlefield. Relying on her unparalleled combat ability, she brings an arsenal of weapons to the field; her sword giving her a close quarters option to any who get too close, her spear allowing her to slow enemies from a safer distance, and her bow, giving her a ranged option to grapple enemies and dash to them. Each time she successfully hits one of her abilities, she gains extra Skill, slowly empowering her abilities over the course of a match. Calling upon her newfound Divine Energy, Mulan’s ultimate allows her to bring forth all her weaponry, damaging enemies with sword, spear and bow, whilst also causing huge damage and crowd control.

Mulan is the first addition to the SMITE roster who started entirely human, and has achieved godhood status through the faith and loyalty of her fellow humans. What this means for the future of our universe, and how the current Gods react to this ascension from mortal to immortal, remains to be seen.