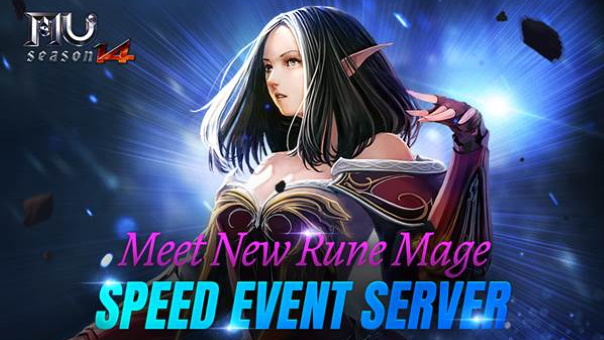 MU Online revealed their upcoming Speed Event Server: Season 5, which goes live on August 6th, 2019. This Event Server offers double EXP, which will run from August 6th until September 3rd. The opening of this server will be accompanied by a host of in-game events, from log-in bonuses, level-up rewards, play-time rewards and so much more. In addition to these, a new class comes to the game, and will also be available on the Speed Event Server: Rune Mage! The Rune Mage is a mysterious half-elf and is out seeking revenge, demolishing enemies with her mace. To unlock the Rune Mage Character Card and other items for free, players can pre-register in the link below.

Starting from August 27 until the weekly maintenance on September 17, Webzen will be organizing a ranking event for the Rune Mage, Rage Fighter or Grow Lancer classes who were transferred from the Speed Server, where the winners will be able to get the newly updated Weapon of Archangel. When players reach level 700 with Rune Mage, Rage Fighter or Grow Lancer and transfer their character to the original main servers (Helheim, Midgard, and Alfheim) after the Speed Event Server ends, they will get 100,000 Ruud as an event reward. Webzen is also working on the next major content update for MU Online, Season 14, which is slated for a September launch.