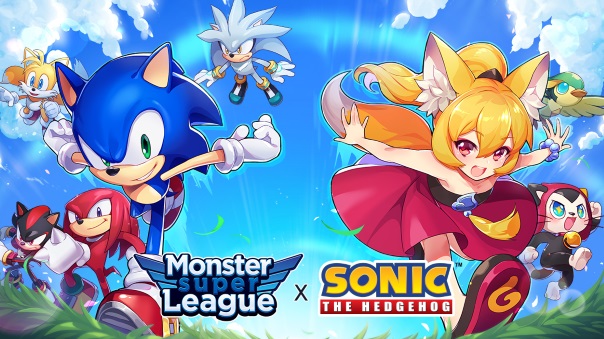 Monster Super League teams up with Sonic the Hedgehog with this new collaboration, which has officially begun in game. This collaboration will let players recruit Sonic, Tails, Knuckles, Silver, and Shadow in the world of Monster Super League. Each of the characters will appear in a variety of events, from Clan, Hero, and Capture. Players can also collect and capture characters in dungeons through Astromon fusion.

Along with the Monster Super League X Sonic Festival, the main character Sonic will be appearing in player’s Airship and open a couple of exclusive events until 24th of this month. The “Ring” is a well-known part of the Sonic franchise, and it’s also coming to Monster Super League. It will appear in exploration stages and players will be able to claim rings in Airship, and exchange them for energy, gold, legendary eggs and more. There will also be a mission complete event, “Sonic Mission Rewards” traking place. Whenever players achieve certain milestones, they collect in-game items from the Sonic franchise. The “Sonic and Knuckles” event will also go on until August 31st, and within it, you can acquire items like the “Light Dark Egg” and “Holy Winky”. These will be rewarded according to the total amount of accumulated energy consumed by all the players globally.

Han-Woong Lee, Director of business department of 4:33 said, “We hope players can enjoy this worldwide collaboration of Monster Super League with Sonic the Hedgehog, and we will thrive to bring more events for players to enjoy.”