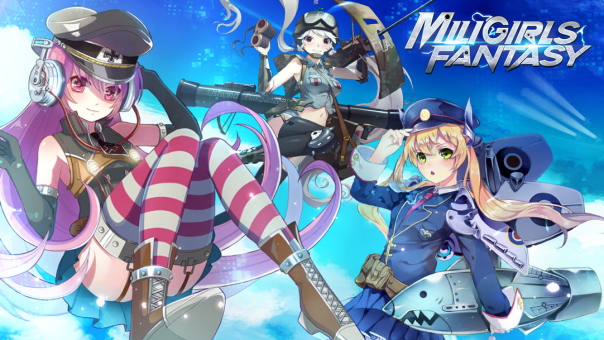 After a long wait, MiliGirls Fantasy is finally up for grabs. We’re talking about a beautiful Anime Idling game accompanied by STG elements, and it’s available on Game Hollywood. The game has the gift of conquering your heart ASAP, because let’s face it: who doesn’t like to see bad girls equipped with weapons and ready to punish the naughty ones?

Getting MiliGirls Fantasy playing is as easy as picking up girls by regular Casanovas as most of our male readers are. All you need is a PC or smartphone connected to the internet. Just in case you’re lacking good connectivity, we can wait for Elon Musk’s idea of the Starlink satellites beaming internet access for everyone to take shape.

Land or air – the decision is yours!
MiliGirls Fantasy allows you to practice your shooting skills in gaming across four land battle types. Whether you’re in for tank type or anti-aircraft type, they’re there waiting for you along with those pretty and brave girls. The battle is basically a side-scrolling type, which will grant much more easy and more relaxing gameplay. A team can be composed of 4 people, meaning that individual struggle won’t be enough to succeed in MiliGirls Fantasy.

If you’re aiming for even more relaxing ways of getting the job done in the new game, the developers have it covered for you once again. You can choose the automatic skill and movement activation so that your girls will fully embrace the “independent woman” behavior.

It will also be difficult to choose your preferred MiliGirl, as we’re sure that you would take many of them at home with you. Each of those cute but battling girls have her own story. Upgrading them is also possible, and you also have plenty of possibilities in this area as well. Each of the girls has her own upgrade options, and you certainly can’t complain about not being enough to choose from.

The MiliGirls won’t hesitate to use all of their arsenals to make it through the Bullet Hell. While being in their shoes, you get to slash and use either bombs or bullets to solve the situation. The audio and visual effects are also immersive and explosive, adding a lot of flavor to the game.

It’s a neat premise, and we’re looking forward to seeing how the war for humanity pans out. You can see for yourself by playing MiliGirls Fantasy right now on Game Hollywood.