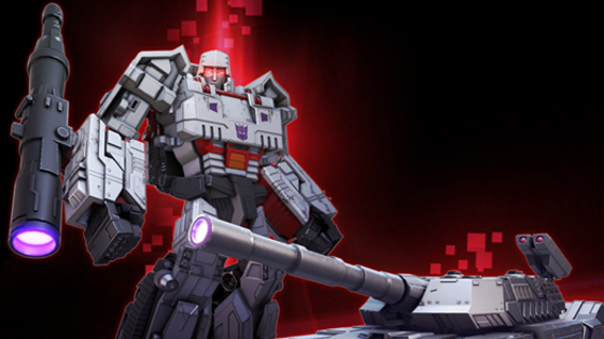 The mighty leader of the Decepticons, Megatron, is now playable in Transformers: Forged to Fight. Once a renowned gladiator in pre-Civil War Cybertron, Megatron used his charisma and power to begin the Decepticon uprising. All that stand before him will be destroyed, particularly Optimus Prime and the rest of Autobots. Below we have the details on what attacks and skills he brings to the game.

SIGNATURE ABILITY – NO MERCY
Megatron shows no mercy and uses the enemy’s own strengths against them.

Melee Hits
As long as the opponent has a Fused Debuff, Megatron’s Melee Attacks have a 20~60% chance to Steal a buff from the opponent for 5 seconds.

SPECIAL ATTACKS:
Special 1 – Energon Crush
The Energon Flail is perfectly designed to shatter the defenses of even the toughest bots.
100% chance to inflict Armor Break, removing opponent’s Armor and applying 26~34% Armor reduction for 10 seconds.
Special 2 – Atomic Slug
Megatron initiates the brutality setting on his Fusion Cannon.
100% chance to decrease Attack by -32~-40% for 10 seconds.
Special 3 – All Too Easy
There is no limits to the carnage Megatron is willing to inflict on his foes.
100% chance to inflicts Shock, dealing Shock Damage for 200% of attack over 20 seconds.
Grants Fusion Overload, allowing unlimited Full Power shots of the Fusion Cannon for the rest of the fight.