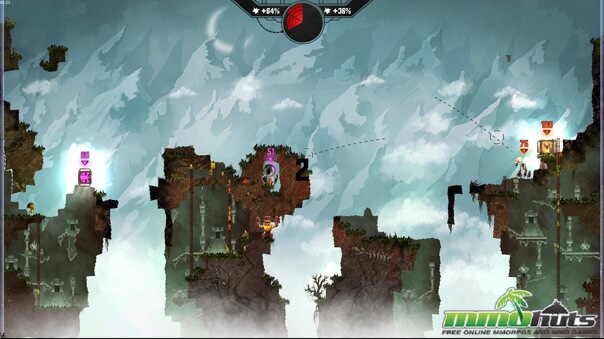 Honor the Gods with Firearms

Mayan Death Robots had a name that, before I had any contact with the game, made me think of a Primal Rage style fighting game. Robotic versions of the Mayan Gods kicking the absolute garbage out of each other, anyone? I could only hope. Turns out I wasn’t too far from the mark! The game plays similar to the W.O.R.M.S. franchise, where two players bombard each other senseless, but with obvious differences. One of the things that I have to say made me excited about this, was it had in-house versus mode. On the PC, this is pretty rare outside of fighting games, so when I invited my friend, Red, over to pummel him with rockets, I have to say I had a blast. No pun intended, I swear. There are ten Mayan Death Robots in all, though some have to be unlocked, and your goal is to garner more worshippers via destroying your enemy, and ultimately blowing up their “Core.” Or at least dropping it into a bottomless pit, the alternative acceptable victory condition.

When I was getting started on this particular title, I did not see any online option, and the idea that this would only be in-house versus was interesting. As I played through the beta, the devs dropped online multiplayer on my head though. Unlike its compatriots in the current artillery genre, each player picks their ability or to jump/build from the ground, and then their attacks go simultaneously, which is kind of nice. It requires you to constantly be thinking and planning, but it’s considerably less stressful than it would be in any other game. Point being, it’s fun; insanely fun. I’m never upset if I lose, because the action is so crazy and constant.

Cast in the Name of God

The primary story of the game appears to be that these robots are fighting to the death for a televised event, and each one represents a member of the Maya Pantheon. However, there are primitive Mayans who find these robots and worship them. The more you destroy of your opponent, the more followers you gain, again with the ultimate goal of breaking their core. Simply destroying the enemy robot won’t grant you the win, but it can gain you an edge, since it takes one turn to respawn. That gives you a free shot at the enemy territory in whatever manner you choose. The game was pretty straight forward until ONE OF THE MAYAN GODS SHOWED UP.

That’s right, Kukulkan, the “Feathered Serpent” appears on one of the stages, and starts fighting both of us! The cores go away, and now the goal is to defeat the God before he wipes out you and your followers! Several of these Gods shows up, and it’s calamity when they do. You still want to win, but you don’t want to be beaten up by the God. . .The character select screen looks very much like a fighting game, with the ten slots for the various Mayan Gods, all with unique abilities. From Hun-Batz (Howler Monkey God) who throws bananas, and a boulder that splits into other smaller rocks, to Hunahpu (God of the Sun) who shoots a rocket-flare, and a nuke!

Yes, the God of the Sun can fire a nuclear rocket. That might seem unbalanced, but take heart: He shoots a bouncy red orb that rolls and eventually stops. But with careful destruction of the land, or bouncing it with your own attacks, you can send it back to your opponent; wherever the orb is, the nuke will descend from the heavens and destroy all it passes through on its way down to the ground. Each God will definitely feel like they are their own, from the look to the gameplay. I think one of my personal favorite attacks was the Moon God, Xbalanque. The Push/Pull rockets are hysterical, and I would launch a pull rocket to jerk my enemies Core off a cliff, and into the bottomless chasm. After playing all the characters on offer, I do not feel that one is any stronger than the others, but the diversity offered with each makes for seriously compelling gameplay. Hun-Batz’ boulder is incredibly slow, and whenever Red would select the boulder, I aimed at the God-Robot to knock him off course so the boulder would not go where intended. It’s all about paying attention and acting/reacting. I also definitely enjoyed that every few turns, a wheel appeared, and a variety of powerful, sometimes ridiculous attacks would be given to both sides. Cross-Missiles, Cluster Grenades, Multi-Rockets, and more! You don’t have to use them the moment you get them either; you can hold it for an emergency, and that’s awesome. I did not try to store more than one, though. Waiting too long to play your trump cards typically leads to an early defeat!

Through the campaign, there are different goals to unlock the next part of the campaign, but you do appear to be able to pick the stage you do it on. Sometimes you have to destroy X amount of Snowmen, or totems, or simply defeat the enemy core. That’s always the goal, but if you say, destroy the other God’s core, but do not between the two of you decimate the correct amount of enemy totems, you have to do it again. Though it does keep track of how many you’ve broken, so it normally should not take more than once or twice to complete a stage and move on. And it’s very distracting when a God decides to interfere, but it happens in phases. The match starts as normal, and after a certain amount of time has passed, a God shows up and starts attacking both players. It has its own HP, and you no longer have to worry about cores at least! After a while they will grow passive, and you can resume your normal combat. I really liked this idea, since it makes Mayan Death Robots stand out in its genre.

There are also single matches, a regular one versus one, as well as short/long tournaments, where you can upgrade your Robot Death God between matches. And while customizing is awesome, and your array of death-causing weapons and rockets are terrific, there is one thing I can’t stress enough: Your God can craft land around your core or wherever your half of the screen is. Functionally it works like building blocks in a Tetris game, complete with a nifty rotation button. Each time you do this you can add a few bricks of land to either create a platform to bombard, or to simply offer temporary protection. However this, and your “Jump” will take your turn, so be very careful. Your jump ability can also break ground, or send you hurtling too far, and on a few occasions, I wound up standing right in front of my enemy’s God.

I’m pretty damn hyped, I have to say. I was hoping to experience this online in addition to the in-house versus, but I got what I needed to know out of playing against my friends. Even when I lost, there was laughter, swearing, and a ton of fun to be had. I do feel like the matchups aren’t always entirely fair, but that is also attributed to playstyle. The turn-based gameplay is really unique to me in this style of gameplay, but I do not think people will find themselves bored, because you do still have to think fast on your feet. I can see this being a fun party game, too. The matches are not going to be so long that people will get bored; conversely, it will be a blast to watch people try and kill each other, and one player can use the keyboard while the other would use a controller. Heck if you’re really cheap, you can go shoulder to shoulder to both play on one keyboard. There’s a lot of potential in Mayan Death Gods, and if you aren’t keeping an eye on it, you definitely should be.