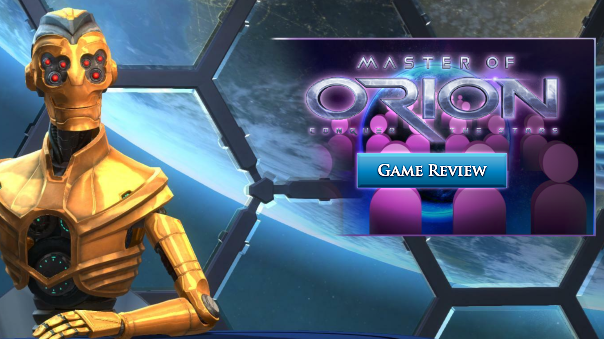 Master of Orion is a turn-based 4X Strategy game that takes place in a space setting. Like a lot of space-based 4X games, you choose a faction that has its pro’s and con’s and do your best to achieve one of the win-conditions of the game. Nothing really new there. However, unlike some other games, this can be forgiven in Master of Orion, as it’s a revival of a game by the same name that originally released way-back in 1993. This is one of the forefathers of the 4X Genre, a game that helped define 4X and had a hand in molding it into what it is today. It can be argued that Master of Orion has helped paved the way for modern 4X such as Civilizations VI and Endless Space 2.

At first glance, you would assume that customization in this game is barren. You choose a race from a small (so far) selection and then get to choose your technology research focus and that’s it really. Well, that plus the inclusion of a new feature to the franchise where you can design your own faction from bits and pieces of the others in-game. Furthermore, you can customize the loadouts of your ships based on what technology you’ve researched. Through the upgrade system it’s possible that a single fleet of starships can survive the whole game while continuing to be a relevant and powerful force. So while I’m not blown away with the customization in Master of Orion, I’m pleasantly surprised that there was more to it than there appears on the surface.

The graphics in Master of Orion are 2.5D. Most of the game is 2D, though some elements are in 3D. The best descriptor I can use is “crisp.” The artwork is fantastic, the animations superb (I love the colonization animations), and the overall feel of the game is fantastic. The UI is smooth and unobtrusive, something I feel any sort of strategy game needs to have to be truly great. The species designs are alright, though fairly generic as they go. If you’ve seen one insectoid space-faring species, you’ve seen them all, it seems. Granted they were working with the source material, so long time fans are likely to enjoy the upgraded looks of their favorite leaders from the 90s. 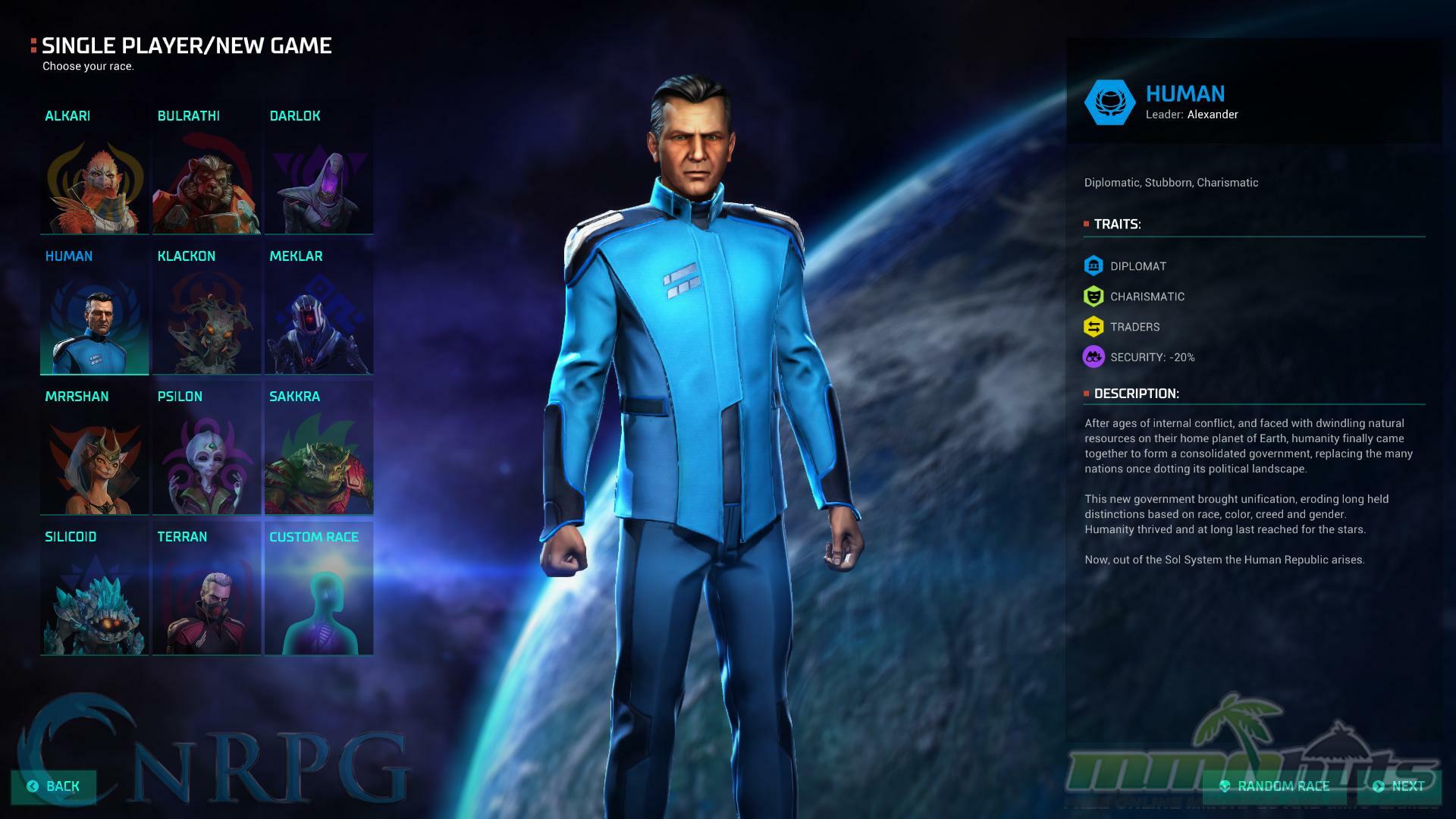 The game is beautiful.

The controls in Master of Orion are simple enough to be easily grasped. This is mostly thanks to the fact that it is a mouse-heavy game. For the most part, you don’t have to be quick about anything you do, so it’s not important to have a few dozen key-bindings to auto-select units or give quick commands. Thanks to the slick UI design, everything can be done quickly and efficiently with the mouse and UI alone. I never really noticed the controls at all until after the fact when I began outlining this review. You know what they say, “If you’ve done something right, no one will be certain you’ve done anything at all.” That holds true here.

This game is a fantastic homage to the original Master of Orion series. There are turns of references and features available from the old games. Orion, which you will be familiar with if you’ve played the original, has made a return and the Guardian is still an asshole. The win conditions are still martial dominance or political unification via the Galactic Council. Many of the planet features are back again, such as achieving Gaia status and artifact worlds.

The population system is used now, similar to the system used in Endless Legend, where over time your colonies will grow in population, and you can place those new population counters under the three major focuses (Research, Growth, Production). Using a clever combination of population, technologies, and world-types, you can ensure that your faction can become unstoppable. For example, on a mineral-rich world you’ll often be hard pressed to build a decent population alone because they’re often barren. However, there are plenty of large planets that have great growth potential. So rather than trying to grow a population on the barren world, you could focus everything on your growth world to growing a population, then get the technology that allows you to transfer population from one colony to another and then just send population to the barren world to work in the slave mi- I mean Production Planet.

Combat is interesting. It uses a pretty simple attack/defense stat system. You can quickly compare the strengths of fleets by selecting one and highlighting over another, which is nice. I mentioned the upgrade system, which I think is a great system. I hate being left with units I have to scrap, as it seems like a waste. The upgrade system eliminates the need for that, though it’s still an option. The ability to modify your ship designs means you can come up with some pretty interesting strategies, too. 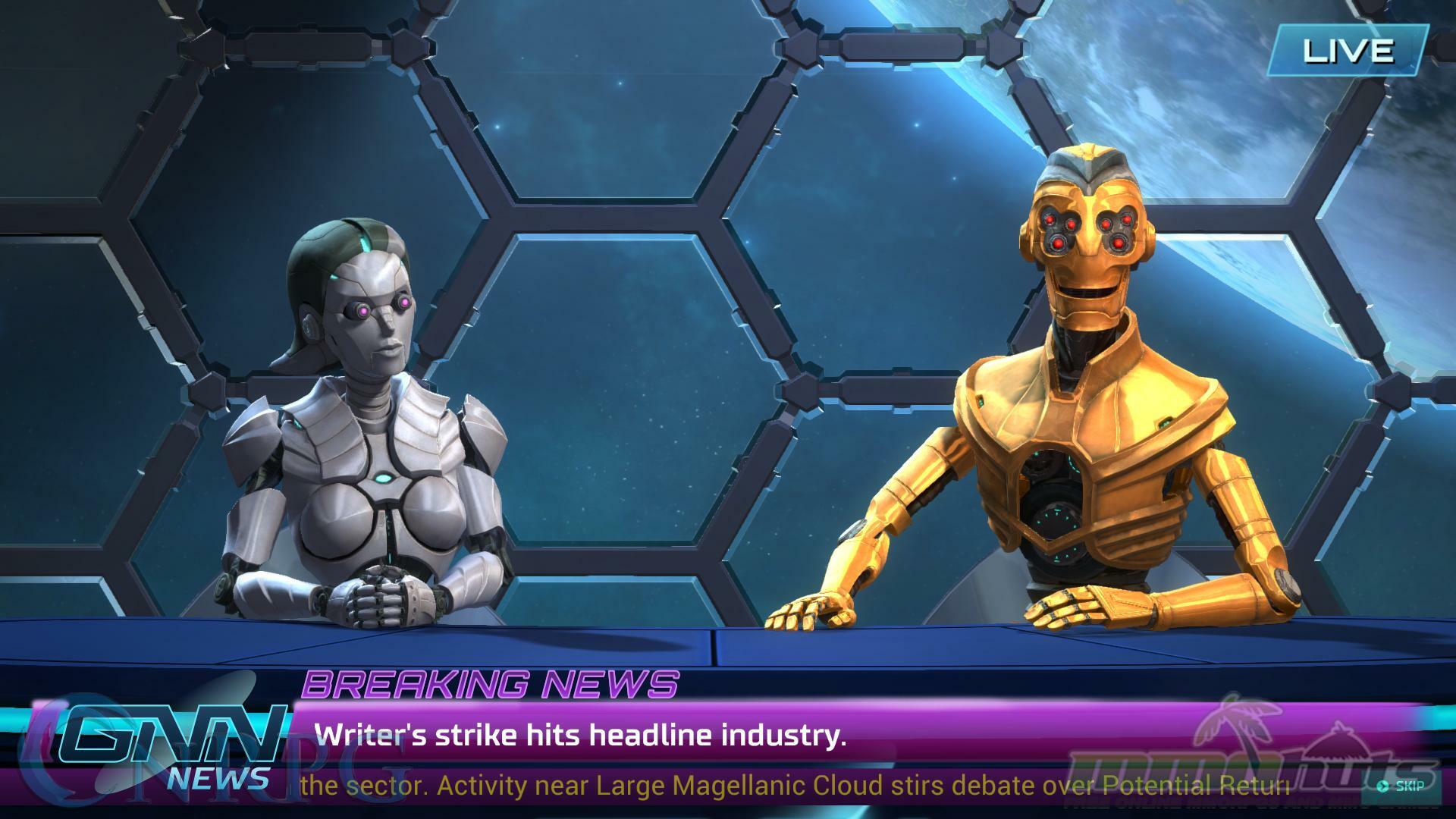 I love the GNN hosts and look forward for each of the broadcasts.

Actually viewing and participating in combat is nice. They did a good job with the combat visuals, which adds a lot to the enjoyment of taking the time to view the battle rather than auto-resolve. Though, honestly, after my first couple of battles I simply chose to auto-resolve every encounter. 4X campaigns, even in Master of Orion, tend to take a long time to get through even without long delays every time a battle happens. Adding an extra ten or more minutes per battle could make a campaign last months, and I don’t have the patience for that.

There are a lot of tiny things that make the game very enjoyable, despite it essentially being the How-To Guide on 4X games. Such as the GNN News broadcasts. The quirky robot hosts are fantastic and it’s a great way to alert players to the going-ons of the galaxy. The advisor is helpful, but not obtrusive. The giant space amoeba are always a treat to come across and the occasional giant space monster is a cool way to lose a fleet.

Master of Orion is far from innovative, but it still manages to be enjoyable. Its lack of innovation can be forgiven, too, due to its nature as what is essentially a remake of a classic. And I have to admit, even though I’ve experienced these mechanics in many 4X games, they ARE fun and that’s the point of gaming, right? I’m hoping they will continue to add to the game, either by releasing further remakes of the game series or by putting out some interesting expansions or DLCs. This is one of those games that I wouldn’t mind a new DLC, as long as it adds something interesting like new ship designs or races, every couple of months. In the end, I would say that Master of Orion is definitely worth a purchase… just stay the fuck away from the giant space lobsters.

Features: 4/5 – Classic features done right, but not much innovation.

Customization: 3/5 – It’s what I expect and want from a 4X, but there could be more.

Graphics: 4/5 – Lovely, is one word to describe the graphics.

Overall: 4/5 – With a few more interesting features, some more customization options, and perhaps some more time and money poured into the graphics, this would be a 5/5 must buy title. As it is, if you enjoy the 4X genre, buy this game.