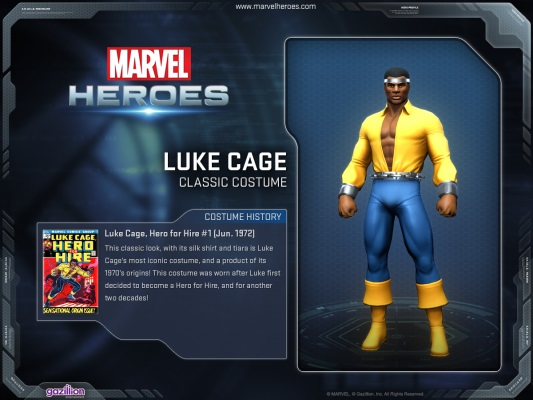 Today, Marvel Heroes is getting legendary with one of its largest updates yet in Game Update 1.3. This latest game update includes a tremendous amount of content including a new Hero, Prestide Mode, the Hero Synergy System, Legendary Quests and much more:

Luke Cage – Players can now jump into the action as the near invulnerable Luke Cage. With super strength, unbreakable skin, and the ability to summon Heroes for Hire teammates, Luke Cage brings an all new play style.
Prestige Mode – Players can now prove that they are the very best with Prestige Mode. After reaching the max level of 60, players have the option to restart at level 1 for the bragging rights of being a Prestige hero. Prestige heroes will be clearly visible to others with an exclusive color used in their name.
Hero Synergy System – Each hero now unlocks account-wide synergy bonuses at levels 25 and 50 that can be equipped on any hero. Since every hero can equip up to ten synergy bonuses, including Hulk’s health bonus and Spider-Man’s increased chance to dodge, players now have access to more hero customization than ever before!
Legendary Quests – Odin himself, All-Father of Asgard, is tasking heroes with new legendary quests! Completing these quests not only rewards the best experience in the game but also allows players to craft Legendary Blessings for their artifacts and more!

A full list of new updates can be found here. Along with these major updates, the new enhanced costume, Lady Deadpool, is also now available for purchase at the in-game store.