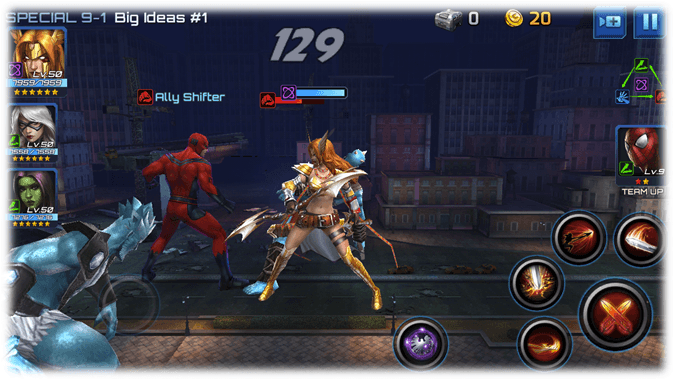 Best known for its standout titles such as Seven Knights, Raven and Monster Taming overseas, Netmarble Games has quickly established itself as a global powerhouse with the success of MARVEL Future Fight. Published in the latest AppAnnie report, the action-packed mobile RPG took the reigns at the top of both the App Store and Google Play Store worldwide charts, landing overall at #6 for May 2015. MARVEL Future Fight dominated the iPhone games ranks, reaching #1 in daily downloads in over 40 countries including the United States, South Korea, and France.

“We are overjoyed at the vast popularity of MARVEL Future Fight,” said Young-sig Kwon, CEO, of Netmarble. “Our goal is to continue to provide fans with ongoing new content, whether it’s additional characters, bonuses or stages that will keep adding to the game’s robust offerings. In doing so, we strive to further engage and reward our loyal players as well as reach new audiences around the world.”

In addition, Netmarble Games is very pleased to join Marvel at San Diego Comic-Con next week for exclusive livestreams, including award-winning Marvel Comics writer Peter David. Netmarble executives and creators of Marvel Future Fight will also be on hand at Comic-Con. The first 2,000 visitors to the Marvel booth will receive an exclusive custom lithograph, in addition to a digital comic, featuring the enticing storyline from MARVEL Future Fight. Marvel Entertainment will be located at Booth #2329.

For those unable to attend Comic-Con, the livestream will be aired live on Marvel.com.