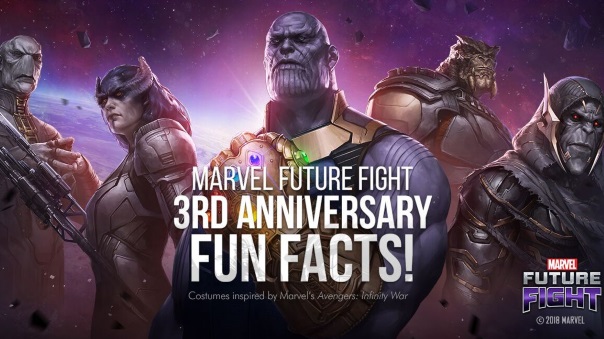 Yesterday, Marvel Future Fight celebrated three years of gameplay, and are commemorating with a number of special in-game events. Prior to the anniversary, Marvel Future Fight was hosting a countdown event from April 16th through the 30th  and it gave out rewards every day, such as the Tier-2 character selector. It will give players the choice to receive a powerful Tier-2 character like Captain America (Sharon Rogers), the Hulk and more for free. Additional events will be hosted in honor of the 3rd year anniversary including a 56-day check-in event and another daily reward event which will give out Premium Hero boxes from April 30th to May 7th. Players will receive 30 boost points six times from April 3rd to May 1st, and a special 3rd year anniversary Comics Card will be handed out to players who log in on April 30th. Rounding out the month’s events, there will be a special sale for gold, ISO-8, special equipment, and more.

“We’re honored to have supported players and their heroes’ quest against the evils of the Earth for 3 years”, said Seungwon Lee, Chief Global Officer of Netmarble, “We thank everyone for standing by us all this time and will continue to create exciting content for the good of the universe for years to come!”