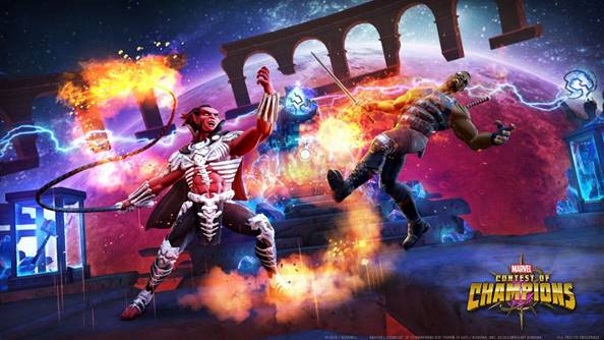 Mephisto, the Prince of LIes, Lord of Evil, Demon of the Marvel Universe arrives! He has joined the cast of Marvel: Contest of Champions to do battle with anyone that is in his path! A bit of background on the character:

Mephisto is an extra-dimensional demon whose main goal is to break the will and enslave the souls of noble Champions; though he cannot take their souls himself, his treachery and deception is often enough to convince his victims to give them up willingly. Mephisto is continually seeking to add more spirits to his realm, using them to his advantage whenever he sees fit. As a demon who has collected numerous souls, Mephisto is practically immortal and his fiery power is eternal.

Special 1: Soul Imprisonment – Mephisto blasts lava from his mouth and then immediately summons a mystical wave of bones, imprisoning the opponent’s soul.
Special 2: Aura of Incineration – Lashing his opponent with his whip, Mephisto then conjures an aura of incineration around himself.
Special 3: Alternate Reality – Mephisto manipulates reality to shrink his opponent, swallowing them in order to drain their Power and spitting them out when he is done.
Signature Ability: Burning Aura – Mephisto burns with anger when getting struck, activating his Aura of Incineration around himself.