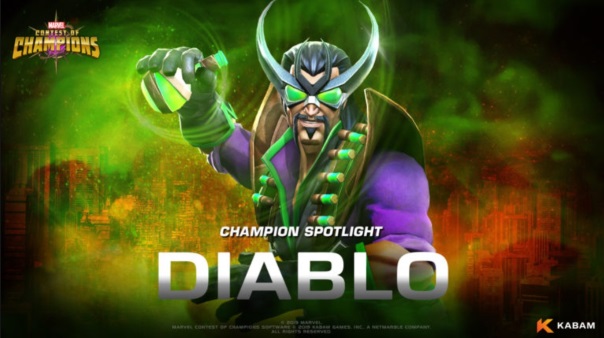 Kabam’s Marvel Contest of Champions reveals their next champion, the mighty Diablo. In order to gain godlike power, you have to be willing to risk everything. We have his bio as well as his stats and abilities below:

An unrivaled alchemist and a member of Spanish nobility, Esteban Corazon de Ablo uses his arcane concoctions to lengthen his life, incinerate his foes and more. Driven by an unending desire to become as powerful as a god, Diablo now finds himself in the Contest hoping to secure the ISO-Sphere for his continued experimentation. Ambition pushes the Spanish nobleman to acquire power at all costs, and very few heroes can, or will, stand in his way.

Developer Note: This self inflicted Poison doesn’t account for Diablo’s natural poison resistance. The actual damage dealt will be reduced by 35% (roughly 475 instead).

Special 1: Double-Edged Elixir – Splashing the opponent with a scalding elixir, Diablo creates enough space to drink the remainder to heal his wounds.

Developer Note: The permanent effects lasts until end of the fight and can be seen in the pause screen.