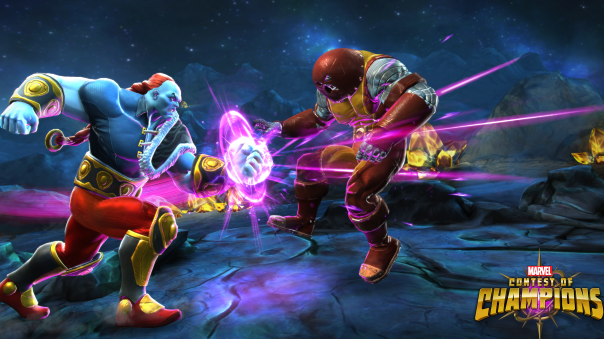 “If you don’t have what it takes to be the best, then move aside”.  The Champion makes his way to Marvel Contest of Champions today. Below is a quick in-game bio, alongside his stats and abilities.

As an Elders of the Universe member, The Champion is able to control an energy source referred to as the Power Primordial, the residual energy that is left over from the Big Bang itself. He channels this energy to enhance his physical form, and he seeks out the greatest fighters in the universe to test the limits of his powers.

Champion of the Universe

Developer Note: This is a piece of his lore that we really wanted to incorporate in his ability design. The Champion is all about travelling through the universe in search for a good fight against the greatest fighters of the universe, mostly to show off his skills. This list includes two Champions of each Class. The Champion will be a great option on AvA attack and on defense when fighting against champions on his list.

While attacking or defending the final node in a Quest

Developer Note: This is currently unique to The Champion. When attacking or defending the final node in a Quest, he will get additional bonuses here and a bigger one on his Signature Ability.

Special 1: Judo Chop –  The Champion paralyzes the opponent with a knife-hand-chop combo then finishes them with a powerful skullet hit.

Special 2: Missile Dropkick – The Champion channels the Power Primordial into his legs to unleash a flurry of powered-up kicks, inflicting critical blows onto the opponent.

Special 3: Champion’s Press Backbreaker – The Champion strikes the opponent with a flurry of combos powered up by the Power Primordial, finishing them with a decisive blow to their back.

Developer Note: That was long! Basically, When he activates his Fury Buff cycle, he can activate Unstoppable Buff and a very strong Regeneration passive. 1.7% per Fury means he will be able Regenerate 8.5% of the damage he took in the current fight, per second. (1.7% * 5 Fury Buffs from his Persistent Charge)