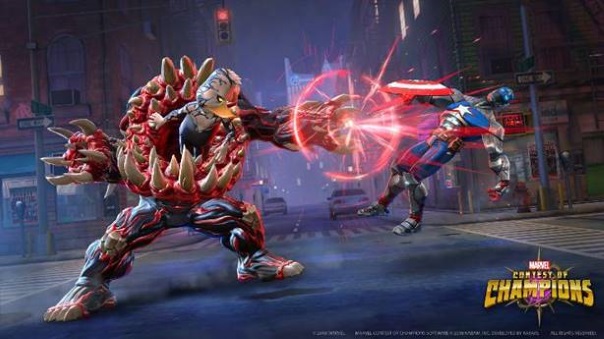 That’s right, Howard the Duck has taken on a new, terrifying form in Marvel Contest of Champions – Venom the Duck. The Symbiote Supreme has given an abomination life and thrust it into the Contest. This beast is driven by Venom’s insatiable bloodlust and Howard the Duck’s intellect and cunning, creating an aberration that the Contest has no choice but to deal with. Below are his stats, abilities, and signature ability. Seriously, guys. What the duck?

Developer Note: Focusing on a single Buff to store in the RNA Bank will greatly reduce its potency. To get the most bang for your buck, you’re better off locking in multiple types of Buffs throughout the Quest.

Launch a Special Attack or Land a Heavy Attack

Special 1: Symbiotic Siphon – Barbed tendrils lash out and rip the opponent’s energy right from their body

Developer Note: This attack is great for building up the RNA Bank quickly early on in a quest or fight. Once you’re hit the per-Fight or per-Quest limit for the RNA Bank, it is better to switch to using either Special 2 (if they have high armor or shrug off debuffs), or Special 3 to activate the RNA Bank.

Special 2: Caustic Onslaught – A barrage of strikes from all directions followed by a volley of blistering shots leaves Venom the Duck’s foe broiling in their own armor.

Developer Note: Toxic Armor is a unique utility ability since it’s considered a Buff effect, meaning that many Champs will have a hard time removing it or being immune to it. This is a solid ability to increase damage output when fighting highly armored tech champions or skill champions that might shrug off Debuff effects constantly.

Developer Note: Using this attack to re-activate all the Buffs in the RNA Bank is only useful if the RNA Bank has been filled prior to activating the attack. Before the Bank has at least 3 Buffs in it, it is usually better to focus on Special 1 or Special 2 attacks.