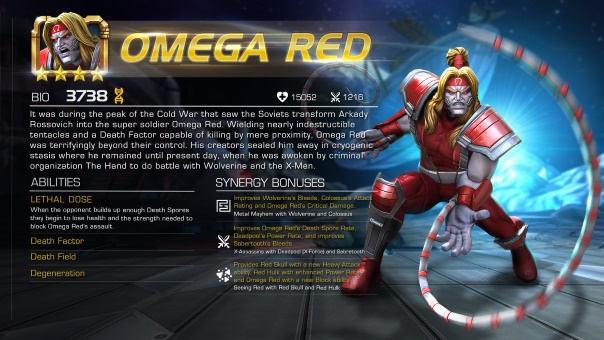 Marvel Contest of Champions has added a new character to its roster today: Omega Red.

It was during the peak of the Cold War that saw the Soviets transform Arkady Rossovich into the super soldier Omega Red. Wielding nearly indestructible tentacles and a Death Factor capable of killing by mere proximity, Omega Red was terrifyingly beyond their control. His creators sealed him away in cryogenic stasis where he remained until present day, when he was awoken by criminal organization The Hand to do battle with Wolverine and the X-Men.

Omega Red’s main abilities are Death Factor, Death Field, Degeneration, and Life Steal. You can find out more at the link below.