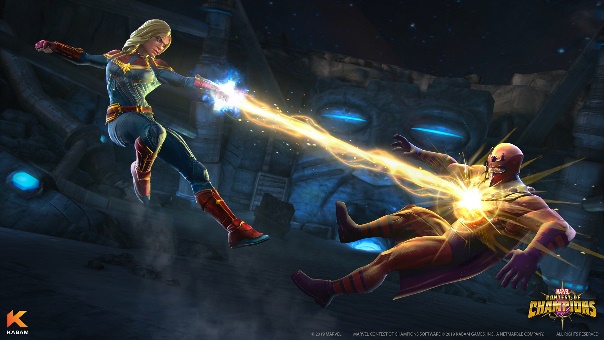 Marvel Contest of Champions has announced the release of the much anticipated Captain Marvel!

After crash landing on Earth without any memory of her past, Air Force pilot, Carol Danvers slowly uncovers the events of her past. Rescued by the Kree and reborn as a noble Kree warrior, Carol learns to control her new powers under the guidance of Mar-Vell, commander of the Starforce. When she finds herself on Earth again Carol Danvers becomes one of the universe’s most powerful heroes when the Earth is caught in the middle of a galactic war between two alien races.

Captain Marvel is a damage dealer with moderate defense. Her basic abilities are Poison Immunity, Armor Break, Energy Absorption, Binary Ignition, and Direct Damage. She can survive poweful onslaughts and do massive amounts of Energy Damage; however, she is weak to Champions that can nullify Buffs or manipulate Power.

More details are available on the Contest of Champions blog.