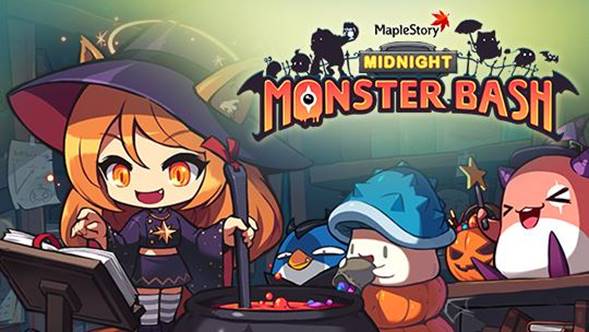 Are you ready for some spooky Maplestory fun? The Halloween-themed “Midnight Monster Bash” has officially been announced and starts next week! It starts on Wednesday, October 18th, 2017 and events will be running through the end of November, with the “Cat of all Tradesh (Nov. 7-28)”, Thanksgiving (Nov. 7-28), and Maple Music Festival (Oct. 24-Nov.14) also going on around this time! From Oct. 24-Nov. 7 you can take part in Hallowkitty’s Halloween Bash, where you collect candy, earn rewards, and do battle with a giant pumpkin. You can also summon the Cat-o-Lantern and feed it Halloween candy to level it up and change its appearance! Some Halloween events are returning also, such as the Madhouse Dungeon (Oct. 18 – Nov. 14) where you enter a haunted hospital to explore rooms, solve time-based puzzles and collect clues to reveal the secrets within! Murgoth Dungeon comes back as well (Oct. 18 – Oct. 31) where players do battle against enemies based on the five Maplestory jobs! Finally, Dark Lords of Darkness returns (Oct. 25 – Nov. 14) and players collect talismans dropped by monsters and use them to complete other quests for rare totem rewards. So there’s plenty of action going around, and that’s just the start of it!