News >
Featured Articles >
MapleStory Through The Years: An Interview with the MapleStory Team 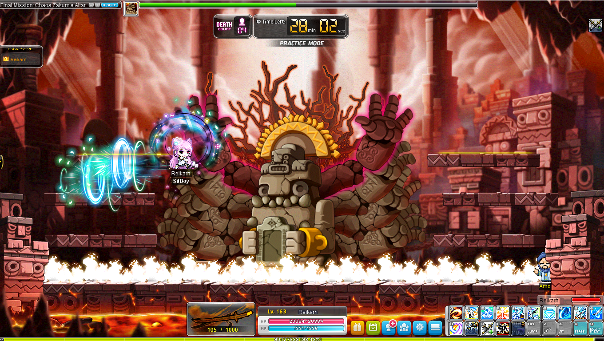 Not too long ago, I had a bit of a sit-down with the MapleStory team to talk about how things have gone over the last fourteen years. Not just any MMO makes it this far and is so successful, so I spent some time asking about what the secret in their sauce is, how they deal with criticism, and more. Thanks to Nexon and the MapleStory team for taking the time.

Ragachak: MapleStory has been around for 14 years, and that’s no small task. I can only think of a handful of MMOs that really last that long. What is the secret to MapleStory’s global success?

MapleStory: We feel the two main factors that contribute to the longevity of MapleStory go hand in hand:

First off, listening to players is key. It’s through player feedback we learn which features are being well received and which are not. This is how we have been able to improve gameplay.
The second part of the equation is providing exciting and new content by understanding what players want and continuously coming up with new ideas. For a game like MapleStory, relatively frequent, high-quality content updates are integral to keeping gameplay fresh to engage players.

Ragachak:  What inspired the idea to make MapleStory a (at the time) non-traditional 2D side-scrolling MMO?

MapleStory: Launching MapleStory in North America was a litmus test for us. MapleStory was already live and doing well in the major Asian online gaming markets, and based on that success, we wanted to find the next market with an appetite for the title. Through our beta testing period, we learned North American audiences were receptive to the 2D side-scrolling game format, so starting up a North American service was the next logical step. We’re so grateful that now, 14 years later, Maplers across the globe are still playing and emotionally invested in the game.

Ragachak: MapleStory was also unique in that it was a fairly cutesy MMO, with adorable creatures and characters. Was there any fear that the art style might not be popular outside of Korea?

MapleStory: We certainly did think about how the art style would translate overseas, but we were also cautiously optimistic audiences around the world would be drawn to the adorable characters. The thought that MapleStory is a cutesy game is somewhat of a misconception. While the game is nice to look at and easy to get started in, the concept is really quite deep. I think the cutesy element of the game was a nice change for players, which helped make MapleStory so popular over the last 14 years, no matter where players are located. If you enjoy pop-culture references and ironically skewed humor, you’ll find great enjoyment playing MapleStory.

Ragachak: No MMO is immune to criticism, positive or negative. How has MapleStory used community criticism to improve the game overall?

MapleStory: Nexon America has always prided itself on listening to what players have to say about our games. We closely monitor the player feedback and try to understand what the players are discussing. In the end, we are always doing our best to find ways to satisfy the players.

Ragachak:  When MapleStory launched in the West, free-to-play MMOs were very much a foreign concept. Was there any discussion of changing to a subscription base in the West? What made you so confident it would work in this new market?

MapleStory: At the time of launch, we conducted a lot of research and looked at where the industry was headed to make our final assessment for a monetization structure. While this was a new concept 14 years ago, we would like to believe that this business model has settled well among Western players as we continue to have a dedicated player base after all these years.

Ragachak: Are there any updates or patches for the MapleStory team that stand out among the rest?

MapleStory: Among the recent updates, we think that V and the Black Mage updates have composed the most important phases in MapleStory. The V update was amongst the most important as it brought 5th job advancement to all MapleStory classes after almost 10 years. The Black Mage update was just as historical as players were now finally able to confront the Black Mage. Many players waited for these two updates for a long time and the contents were well received worldwide, breaking many MapleStory records.

Ragachak: How does MapleStory keep its gameplay fresh after all this time?

MapleStory: We are continuously adding new and exciting content and events through patches every 4-6 weeks to continue to provide our players with fun experiences. We take great pride in not only providing players with new ways to enjoy the game through regular patches but by also keeping in close touch with our community because they are the lifeblood of MapleStory’s success and longevity.

Ragachak: What does the future hold for MapleStory?

MapleStory: Well, we can’t give away too much, but players will continue to see new, fun, and creative content.