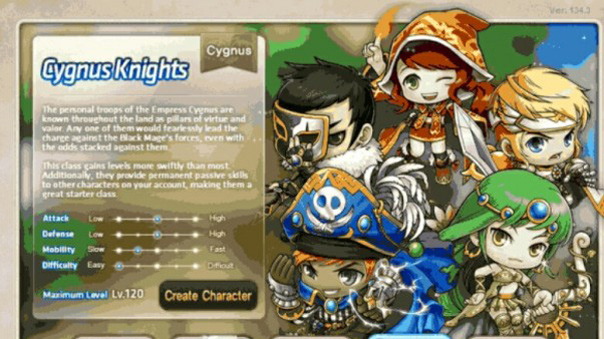 You heard of MapleStory, right? If you’ve followed MMOs at least beyond the surface level, you’ll know that it is a 2D, sprite based, action MMORPG. It’s a game whose cute, anime-style art, and solid platforming combat have become popular with kids and adults over the better part of a decade. And you can thank the game’s longevity for this knowledge. Being the old kid on the block has meant that years of advertisements, supermarket gift cards, and good old fashioned word of mouth has made the name almost as well known outside of Korea as Star Wars: the Old Republic.

Definitely not World of Warcraft, though. Let’s not get crazy here. Even my grandmother knows what WoW is. 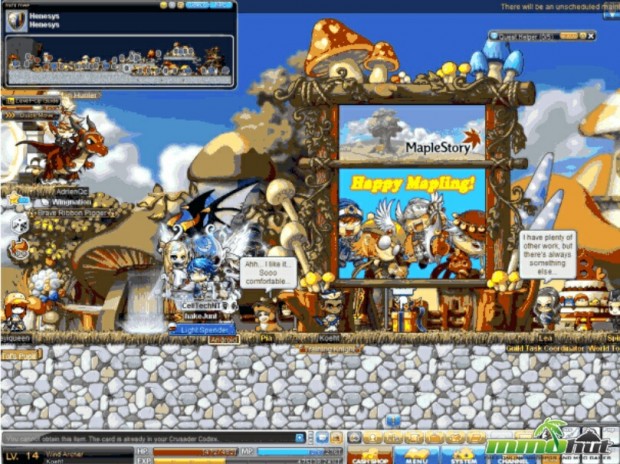 MapleStory’s age has proven that it has some staying power, but age can also weaken that power over time. Though a video game may not change in the way my grandmother would (who, by the way, is a spry and healthy being, thank you very much), years of updates can dilute or even outright break a game if implemented poorly. Yet, if done well, these updates can make the game stronger than ever and provide a variety that most new games cannot give you.

Let’s take a look at how Nexon has treated MapleStory, now that it is in its 8th year in foreign territories.

After a rather lengthy download process (at almost 5GBs), account setup (with TWO login screens) and character creation (which involves entering a PIN code for each toon. They REALLY want to stifle hackers…), you’re ready to start your adventure. 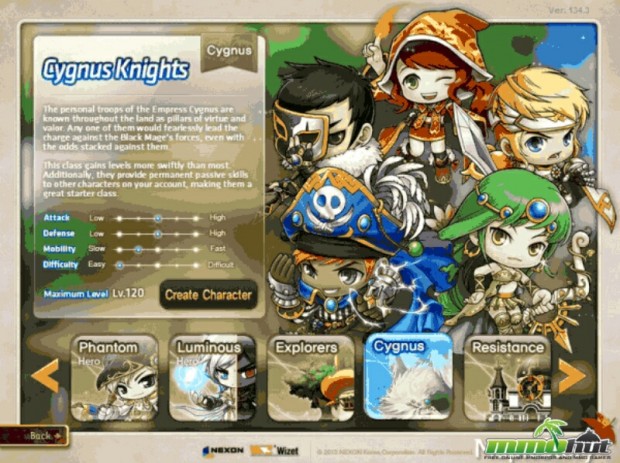 Character creation itself starts with selecting a class like the Explorer, Cygnus Knight, and Resistance. Other classes are locked, though which ones are locked are random at any given moment. Each character class has their differences, such as their move speed and how quickly they can level up. Some have altered mechanics, such as a beat-em up style combo system for Aran. The game does a decent job of explaining each character path and, along with the number of classes, will give you a sense of the breadth of content that MapleStory has to offer.

Once you choose your character type and customize his or her look, you’re ready to go.

You start off in a tutorial zone, which differs based on which class you picked. Regardless, you will be introduced to the mechanics of the game. You’ll learn what buttons you press to attack, jump on floating patches of grass, and talk to npcs. If none of the default keys are to your liking, the game allows you to change the controls with an intuitive on-screen keyboard. MapleStory even comes with gamepad support. A quest helper, named Tot, and an NPC follower are also there for quick reference as well.

Once you get the hang of the controls, the rest of the tutorial places you into a routine of taking a quest, completing the tasks for said quest, and returning to an NPC for experience. It’s standard boilerplate MMO questing. Sometimes your quests are several screens away, hiding behind two or more branching paths, and it can get a bit overwhelming at first. Thankfully, there is a search function on the world map as well as a navigation system to see you through – if you can figure out how to use them.

Hi, little fluffy bunny! I need to murdalize you for money.

Once you are in the quest area and ready to kill the cute and cuddly baddies, you’ll find the gameplay to be simple but fun. You can attack with either your main weapon or any skills you have. You can charge into the herd with your sword arm swinging or position yourself near a ledge and safely poke at an ornery mushroom with your arrows. There isn’t a whole lot more to it than that in the beginning, but it will hold your attention given the real-time nature of the combat. 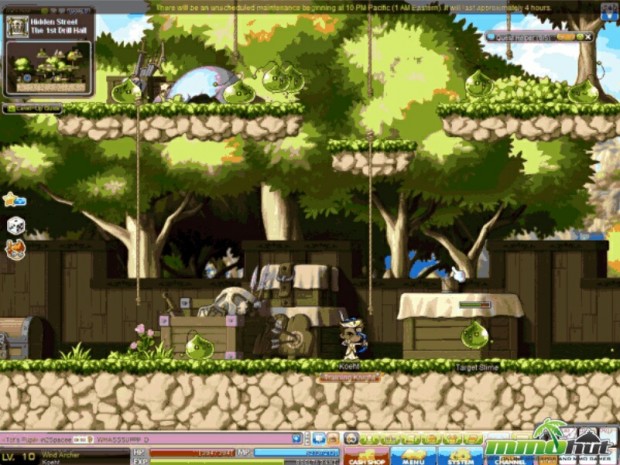 Of course, all this fighting will net you enough experience to level up. Once you do you’re introduced to your character sheet where, upon level 10, you can add stat points to any attribute you wish – something that is rarely seen in modern, more casual games. Thankfully, for those of us who aren’t blessed with excellent math skills, there’s an auto-assign button that will reasonably distribute your stats for you.

When you reach a certain level, and depending on your base class, you can advance into one of the five job archetypes. There are four jobs that you can choose from at level 10: the Warrior, Bowman, Thief, and Pirate. You can choose the Magician job at level 8. Each job can advance to a stronger one when you reach certain levelling milestones. This also depends on your base class. For example, an Explorer Thief can class up to either the Assassin or Bandit job lines while the Cygnus Knight equivalent, the Night Walker, can only class up to a stronger version of the Night Walker (with increasing degrees of badassery). Of course, none of this applies to any of the legendary classes, who have their own paths to progess in as well as their own storylines.

Ok, I’ve learned a lot. Time to step out into the world!

The tutorial is good at easing you into the game up until a certain point, allowing you to take in everything at your own pace. The world is vibrant. Monsters and NPCs are drawn with colorful details and gigantic chibi heads. The sprites render well in the game, though MapleStory only supports two resolutions, both of which are in the 4:3 aspect ratio. The screen will stretch on widescreen monitors, but you won’t mind or notice the extra chubbiness of the characters if you’re new to the game. You can always drop it down to windowed mode if it bothers you but if you are rocking a high resolution monitor, the entire game will look pretty small. 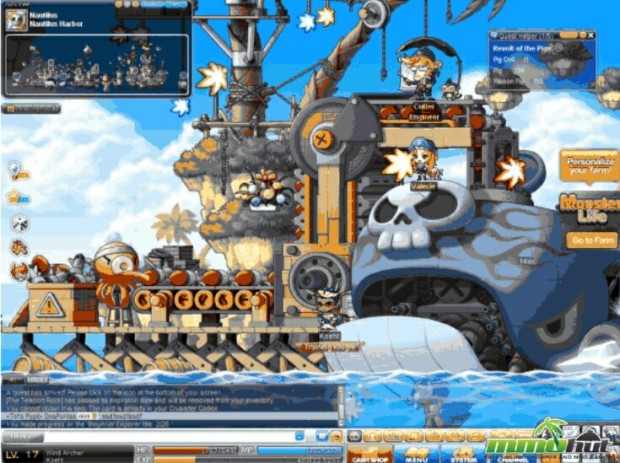 The music runs the gamut between upbeat and somber. The sound effects emit both a cartoony and visceral feel as you rip tiny anime snails a new one. Both the sound design and music fit the visuals nicely.

Onward! To adventure! Uh… where do I go for that?

Your eyes and ears want to tell you that this is a sweet and inviting game, one in where you can prance around with your daughter or puppy. But, in order to do said prancing, you’ll need to shield your loved one from the reality of its cold emptiness. Your NPC companion will be gone when you leave the tutorial zone. And even Tot, the quest helper, won’t be nearly as useful as he once was, being relegated to a (sometimes) context sensitive infodump. If you haven’t figured out the navigation system yet, you’ll spend a good chunk of the game trying to figure out what quests to take, which can seem sparse if you don’t know where to find the quest givers. 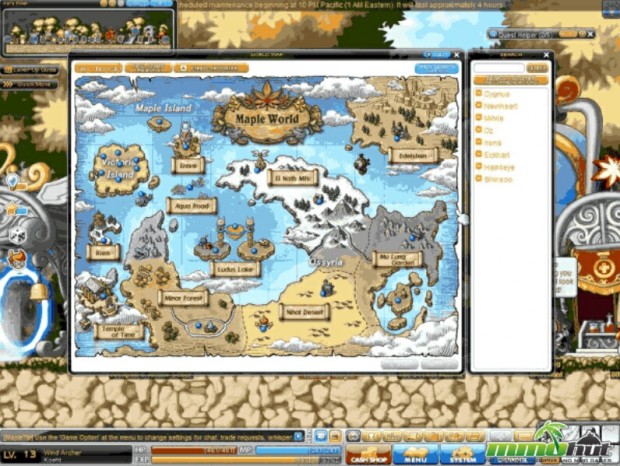 The tutorial doesn’t teach you any of the other essentials, like finding shops to buy equipment. And most of the items for sale in the beginning zones are pretty darn expensive. I suppose that encourages use of the real money shop, but even trying to buy in-game currency seems like a chore. It took me a while to find the button to buy NX points. You’d think that, if they wanted your real life cash, it would be the biggest button on the menu and be a little more descriptive than “Charge NX.”

This ultimately puts the breaks on the sense of progression given in the tutorial. It’s quite the jarring learning curve. The game leaves it to you to figure out important functions like the navigation system which, you’ll need to learn to make your time in MapleStory easier. The post-tutorial game for a newbie is an uninviting one – a stark contrast to the cutesy monsters and kitschy music that permeate MapleStory.

The game is an overwhelming beast for the new player. Although the character development system is a stat junkie’s dream and the world has a lot in it to explore and discover, MapleStory does not do much to guide you past the tutorial zone. As a new player, your best bet is to have a friend help you through the rest of the content or you can look up wiki articles on the internet. It’ll reduce your risk of becoming hopelessly lost.

But why would you want to play this game in the first place? Well, if you’re the min-maxer type of person, you might be willing to ignore the rough edges and long grinds in order to build that character you tooled around with in your spreadsheet. This is also true for people who are fans of old-school RPGs and MUDs (I am really showing my age here…) and don’t mind the lack of handholding.

You may also want to play this game if you have friends who are already established players and know the game well. The gameplay is fun, if simple and repetitive, and will entertain you long enough for your veteran friends to get you through the confusing parts and into the more interesting content. 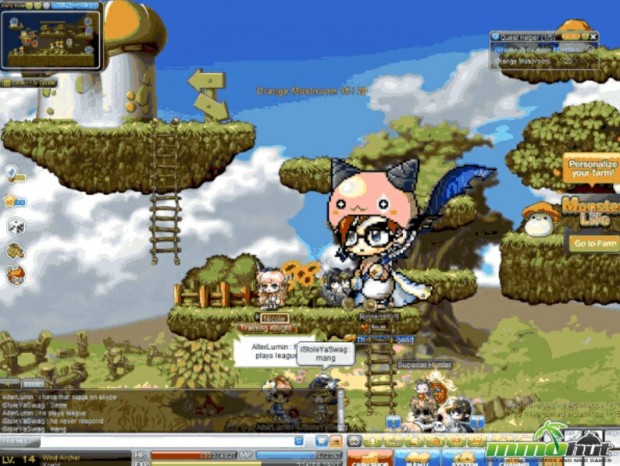 And, then, there’s the rest of us.

There’s a lot of promise of fun in this game. If you have enough patience to figure things out on your own, and you get used to some of the more grindy aspects of the gameplay, then you’re certain to find something to keep you occupied. But, more likely than not, you’ll probably think there are better ways to spend your time, and you’d be right to think so.