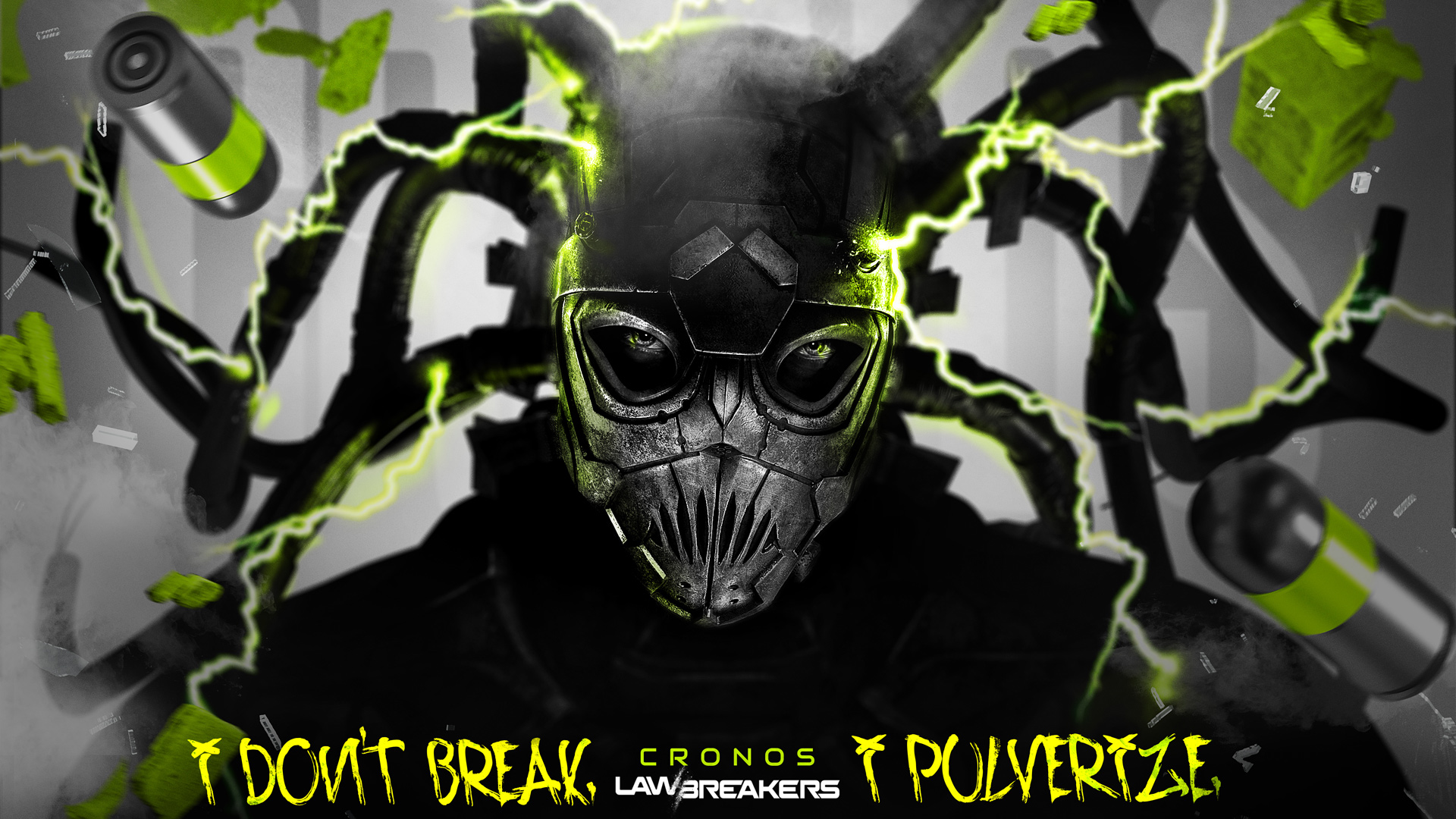 Recently, ColtronXL and I had the good fortune to go to BossKey Studios and be among the first people to really get our hands on their upcoming game, LawBreakers. LawBreakers is Cliff Bleszinsky’s brainchild, a beautiful and unique shooter, based on a fictional earth where a calamitous event happened called The Shattering. I don’t think I can go into much detail, but suffice to say, the Earth and Moon are never the same, even after the world rebuilds and recovers. But LawBreakers is a symmetrical game, meaning you have two teams, and the “classes” function identically in every way on both sides. So the Titan on the Law side does the same thing as the Breaker side, but aesthetically they look different. It is my sincere feeling that this game is going to be far and away different from anything on the market for a bunch of reasons. One of the most important though: Not a 60 dollar game! It is a multiplayer shooter, and is being marketed as such. It’s not going to cost 60 bucks for you to play a multiplayer, and that’s fantastic. It will [as of this writing] likely have microtransactions for skins and cosmetic items, but not for a pay to win system. Buying the game gets you the characters, and new ones when they come out. 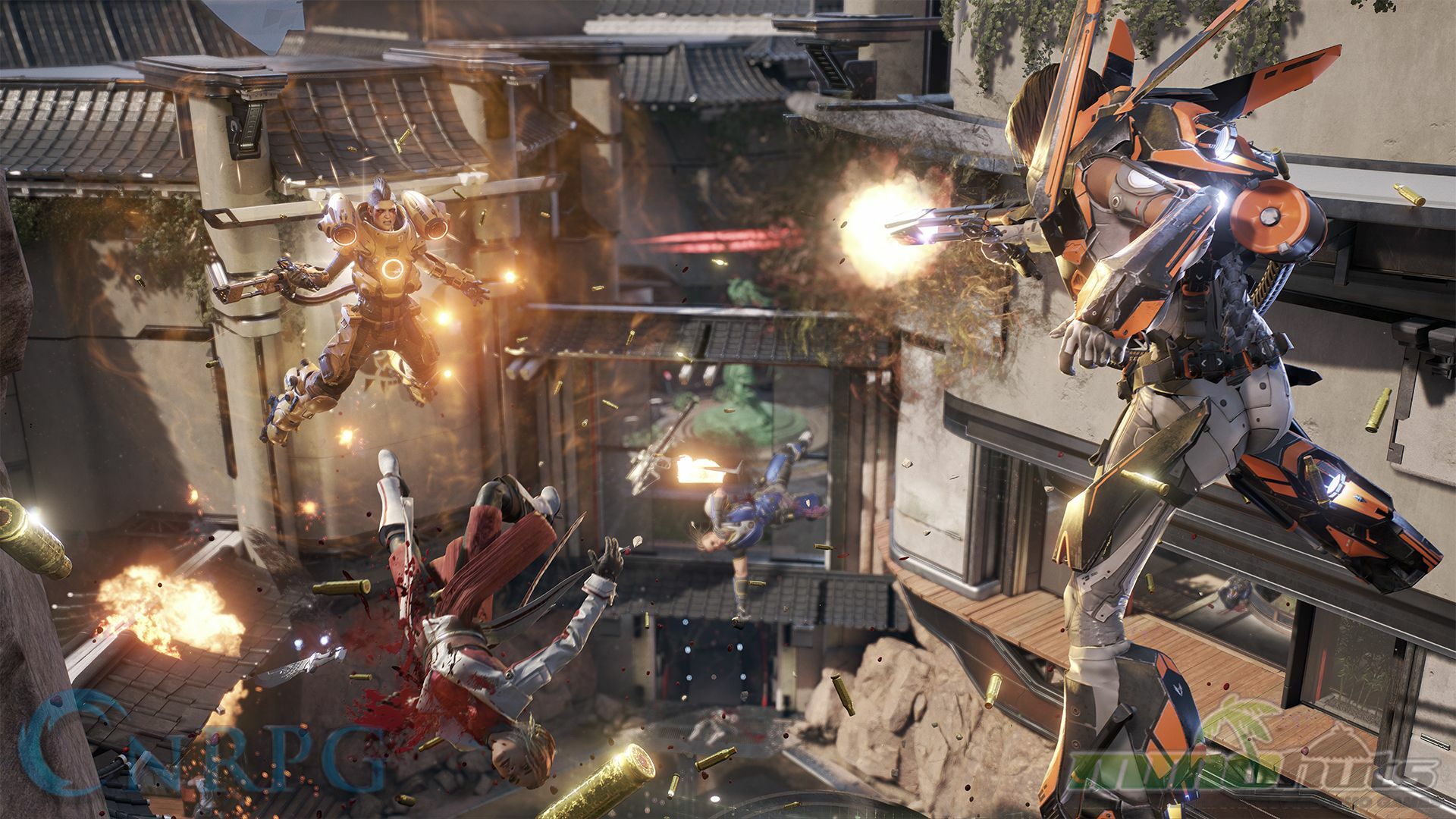 The big selling point is the Zero G adrenaline rush.

The gameplay is what will really set it apart, though. Pricing aside, this game is fast-paced, intense, and gravity-defying action. We only got to play one mode so far, but the tag-line, “Pummel Gravity into Submission” could not be more appropriate. The sensation of being in a very low-gravity [to no-gravity] area was real, and was more than just a gimmick. It’s an integral part of the game, and being able to manipulate a primal force like gravity was really insane! I went into this having not seen the trailer; I didn’t want my thoughts to be tainted by any previous knowledge, but that’s okay because there’s virtually nothing known outside of what we saw. It does have some things in common with current shooters, like being able to swap classes when you die, but we were seeing [and practicing it] swapping classes around as a whole team, such as one side having four Assassins and one Titan [tank] to sweep and just slice-and-dice us with ease. 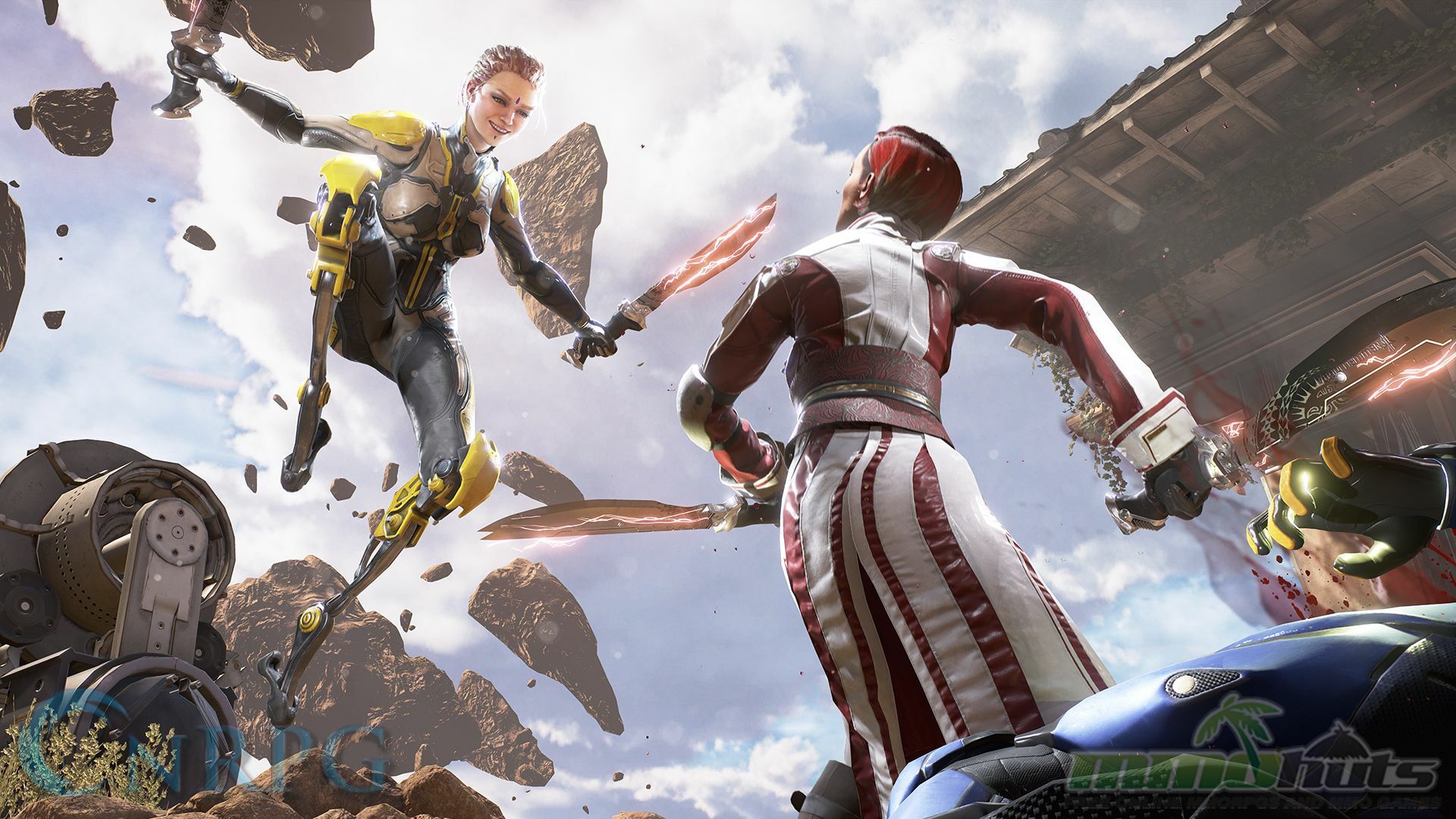 That moment when your brain realizes you won't react in time.

What makes the Assassin unique, is it can swing through the air a’la Spiderman and leap down, slicing away, very swiftly taking down one, two, or more enemies. That’s why a crew of them, lurking in the shadows is horrifying. But when one comes dashing at you [because they commit to a line of motion], you better know where your “kick” button is! It reminds me of the kick from Bulletstorm, where you punt an opponent away from you pretty far, giving a chance at life. Though my favorite class so far was the Skirmisher, because they have a really big Gatling gun, razor grenades, and a dive-bomb special that I received quite a few double/triple kills with!

Well enough rambling. How about I just break down the details of each available class so you can get a better feel for the game? Here’s a list of each class, who represents them [Law/Breaker], and a little something about them:

Titan: [Bomchelle/Chronos] Wielding the “Hammerhead” Ballistic weaponry, the Titan uses a Rocket Launcher and Lightning Rifle to do monstrous damage to anyone unfortunate enough to be near them. Their mobility move, “Pulverize,” can be charged, and leapt with to break the bones and morale of the enemy team. You do move quite a bit slower with it, so I tend to use it to surprise people from above. Between that, Neutron Mines, and the ability to go Berserk, the Titan is not to be trifled with.

Enforcer: [Axel/Kintaro] The Enforcer packs a weapon called the Aerator, which grows stronger as it lowers its ammo, and the Badger, a close-quarters style weapon. Enforcers can also create a field that manipulates the local gravity, increasing movement/firing speed/reload time of their team. It takes time to recharge, but it can really turn a fight around. The Electromag Charge can disrupt enemy systems, and the Bloodhound Launcher hurls a barrage of homing rockets onto a target!

Assassin: [Hellion/Kitsune] The Arc Blades are the primary weapon – a style of tanto or machete with a very fast attack speed relative to other classes. They combine that with a short-range shotgun, named Romerus, that can be overcharged for quick surprise kills. Assassins swing through the air like Spider-Man, leaping from buildings to secluded spots, and dashing around projectiles and attacks. Their Aux Blast can knock foes away, putting them into proper ganking position. Frenzy is their ultimate ability, increasing damage and regeneration, and getting kills prolongs this intense, PCP-style rage.

Vanguard [Maverick/Toska-9]: Probably my favorite gun in the game so far, the Hydra Gatling Cannon offers precision and a LOT of bullets at one time. For a gatling cannon, it is quite precise. The Vanguard’s suit utilizes Pulsar technology, firing a blast forward that propels the Vanguard backwards and away from harm [which can still be quite dangerous to nearby foes, or even yourself if used haphazardly!]. The Afterburner mobility skill will let them move into flight, but burns their fuel like Pulsar does. The Vanguard has Meteor Shells for grenades, lobbing a rain of death onto someone with a cluster of exploding projectiles. Their ultimate ability is Starfall – leaping into the air, and crashing to the earth like it’s namesake, damaging anyone unlucky enough to be caught there. The resulting low gravity field makes using the Hydra on survivors easy pickings. 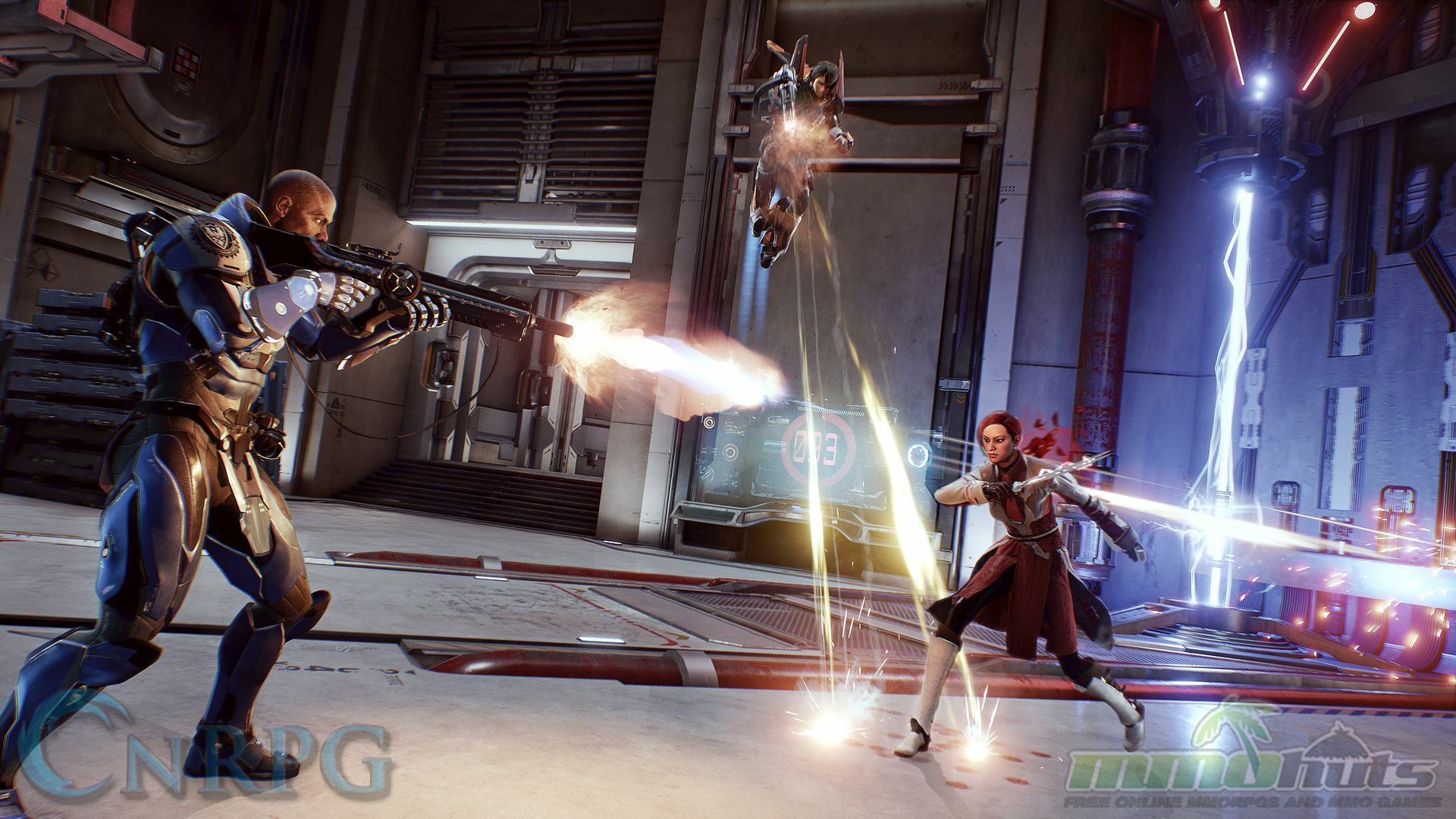 There’s another class being worked on, which is super secret, and super cool! But I can’t talk about it though. That’s one of the things I enjoyed! Because now I am armed with knowledge of upcoming characters! And you aren’t! Rest assured, the playerbase will love this when the time comes.

There’s another game mechanic I really loved, and that was blindfire. When someone is chasing you and shooting you, you don’t have time to spin around and start pulling that trigger. Especially if you have an objective in hand! So what do you do? Whip your gun over your shoulder and blind fire! It’s really hard to get kills that way [but Coltron managed one, and I was super jealous of it!], but it will probably get people to take evasive maneuvers and get off your back for a bit. Each class is unique, and each version of a character [both sides] looks aesthetically different and pleasing. That leads me to my last thought: Visuals. Oh my Lanta this game is gorgeous! It’s not “Green and Brown the game” where everything is gritty, monocolored, and boring. It’s vivid, bright, and has a very diverse color palette. 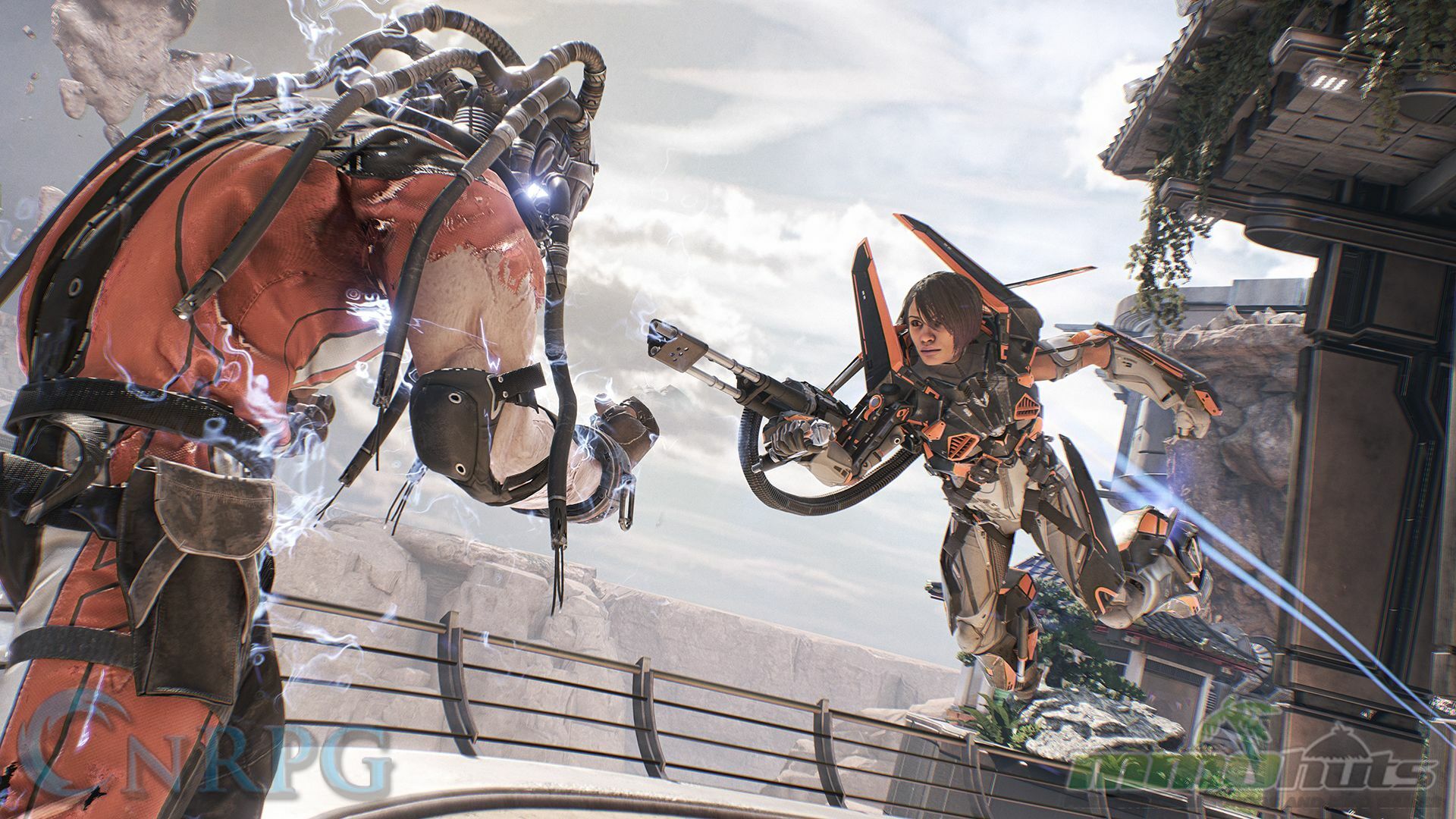 The emphasis on close and ranged combat makes for some visceral action.

The worst part of LawBreakers? I DO NOT HAVE THIS GAME RIGHT NOW. I’m not a big shooter fan, but it brought out the competitive side of me [which isn’t buried very far…]. Coltron and I were privileged to be a part of the group that played this early and got to experience what will be a game-changing shooter. I did ask Cliff in a round-table what he thinks of people thinking he’s washed up, or doesn’t have it anymore, and his response was “Thanks”. It motivates him and it shows. I was blown away by how deep this game was, how fast, how intense it is! But the Alpha invites will hopefully be going out soon! We’ll be doing our best to be there, and we hope to see you there too!