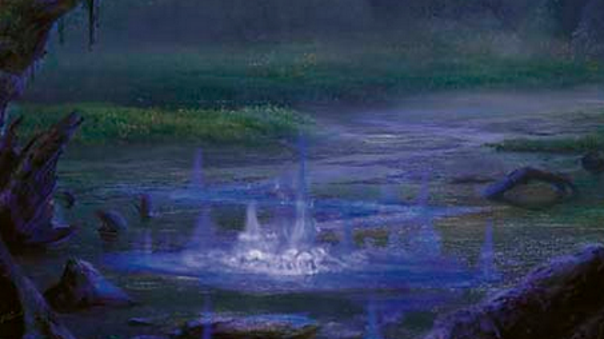 So many cards I love and loathe are coming back for the Core Set 2020 of Magic: The Gathering, dropping in July 2019. I’m going to try and focus on the new cards, instead of the reprints, but I do want to talk about a couple of them, before getting into the nitty-gritty. For example, Leylines are coming back! Leylines were a type of enchantment, that, should they be in your starting hand, you can put them into play immediately. Leyline of Sanctity was a way to deal with a few Modern/Legacy decks, and can completely ruin a RDW’s day. Each color has its own special power, such as Blue (Sanctity) giving all of your spells Flash. Black (Void) puts enemy cards into exile instead of the graveyard. They’re incredible, but I don’t think they’re going to shake the game up like never before. But they will be a threat in certain situations.

Another fun card coming back is Steel Overseer. With the number of tiny artifact creatures that can be made now, Steel Overseer gives them all +1/+1 when tapped (so every turn, or multiple times a turn). I used to run Overseer in my infinite Myr deck, so I’m both delighted and horrified. Another card that’s making a return to slow the game down, is Rule of Law! The artifact version is better, in my opinion (Ethersworn Canonist), but she’s not coming back (yet). Rule of Law is an enchantment that makes every player only able to play one spell a turn, period. Tired of being rushed down? This might help. But, I figure I’ll highlight a few cards per color. I don’t want to focus on Planeswalkers because let’s be honest -those are all going to be amazing. 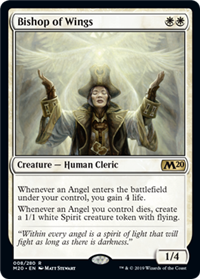 Bishop of Wings – Whenever an Angel enters the battlefield, you gain 4 life, and whenever one dies, you make a 1/1 spirit token? Pair it with Divine Visitation, and those 1/1 spirits are angels again. You have a literal Angel-producing factory. Oh, did you get board wiped? That’s a shame. Bishop of Wings may die, but he’ll still get that army of angels back up, and give you a ton of life to boot. Then, during your turn, use this next spell to just bring him back again. 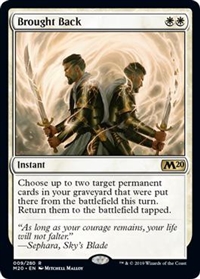 Brought Back – Choose up to two permanent cards in your graveyard that were put there from the battlefield this turn, and bring them back (tapped). There is a ton you can do with this card, most of it infuriating. Even if it’s just bringing back Ajani’s Pridemate, and when paired with cards like Bishop of Wings, Angel of Vitality, and pretty much any other white card in existence, he’ll be buff again in no time. But it has to be a creature that died, not one that got put into the grave via discard. 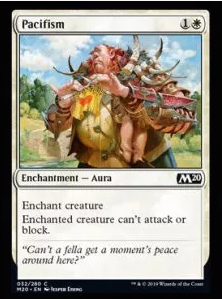 Pacifism – This is a staple of the older days of Magic. It’s a two-drop that prevents a creature from attacking/blocking. They can still use their powers/abilities, but it’s a great way to stop that damn enemy Hydra from blasting you in the face with tons of free damage, or that Dreadhorde Butcher from getting bigger. They might sacrifice him to still get the damage off, but hey! No more attacking! 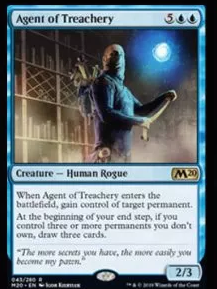 Agent of Treachery – Did you think Simic Mass Manipulation wasn’t annoying enough? Did it need something to . . . freshen it up a bit? Agent of Treachery is what you need! It’s a 7 drop, but with the mana that deck produces, that’s no problem. When it enters the battlefield, you gain control of a permanent. If you control three or more permanents you don’t own during your end step, you draw three cards. I think you can see where this is going. You can use the next card to bounce it back to your hand, and do it again next turn (or during your opponents turn, with the right set-up). 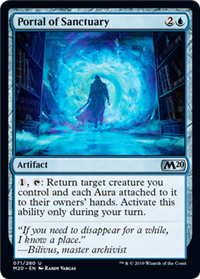 Portal of Sanctuary – For three mana, this is a steal. It’s an Artifact, where you can tap 1, and return a creature you control (and each Aura attached to it) to its owner’s hand. So you return Agent to your hand and do it again. With enough mana, you can make someone very, very miserable. It’s practically built for me! 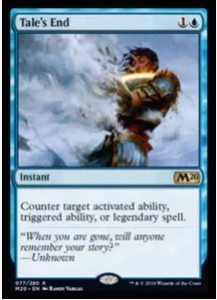 Tale’s End – Just what we needed, another wonky, specific Counterspell. Seriously, that’s what we needed – I run a lot of Blue. Tale’s End is a two drop counter, that counters a target activated ability, triggered ability, or legendary spell. Does this stop Liliana from using her absolute nonsense ultimate? It’s an activated ability, isn’t it? It’s also two mana to counter Teferi, or whatever planeswalker is annoying you at the time. I absolutely love Tale’s End, and it will probably be slid into certain decks. 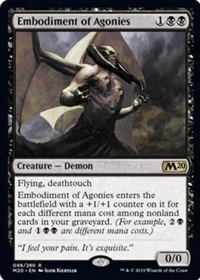 Embodiment of Agonies – Black’s thing has always been Demons. Sure, there are Horrors, Skeletons and Zombies, but let’s be real – Demons are really where it’s at. This demon is a three drop, with Flying and Deathtouch, but what really makes him shine is that he comes into play with X +1/+1 counters. This is based on each different mana cost among non-land cards in your graveyard. He’s going to be a big-time player in any of the various graveyard decks (GB, UB Self-Mill, etc). He’s a very strong mid-game creature, where he can really punish players who have been milliong you down, or if you’ve been doing it to yourself. Just hold a Find/Finality in your hand to get him back. 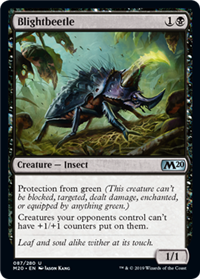 Blightbeetle – This little buddy will make your opponents groan in anger and stress. Not only does he have Protection from Green, but your opponents can’t have +1/+1 counters added to them. Merfolk ramp/power-up? Not anymore! He’s just an adorable little beetle pal, yes he is! 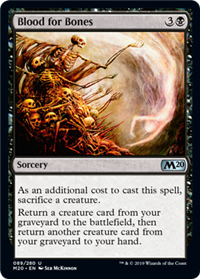 Blood for Bones – Remember how I said Embodiment of Agonies will need an engine in case he’s destroyed/discarded? Blood for Bones is here to help. It’s a Sorcery where you sacrifice a creature. But you can return a creature from the grave to the battlefield, and another from your grave to your hand. This goes well with that damn 8/7 Zombie Dino that requires you to discard every turn. So you discard a massive creature, then put him on the field for 4. Then you put one of your creatures back in your hand to cast next turn (or this turn). 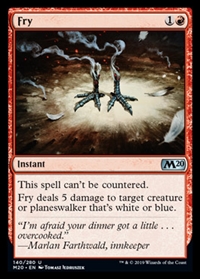 Fry – This spell can’t be countered, and deals 5 damage to target creature/planeswalker that’s white or blue. It screams “Let’s kill those ultra-powerful Blue Planeswalkers”! And that’s just what it’s going to do. I don’t really have to say a lot about Fry – it speaks for itself. It’s a two drop and is incredibly powerful. 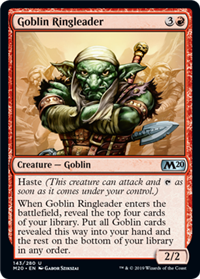 Goblin Ringleader – I do love a good Goblin deck, and this is going to be really infuriating to deal with. When it hits the battlefield (it has Haste too), you reveal the top four cards of your library. Al Goblin cards go to your hand. Since it’s a Goblin deck, it’s almost entirely goblin cards, and you’ll no doubt have the mana to play at least some of them. 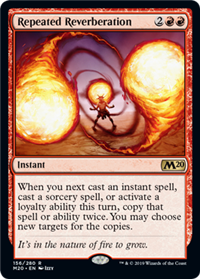 Repeated Reverberation – When you next cast an instant, sorcery or a loyalty ability this turn, copy it twice. You can also choose new targets. Ping someone for 1, cast this, and then pop Skewer the Critics for nine or so. Then cast the second one in your hand (because RDW always seems to have two in hand), and then laugh when you melt someone’s hopes for winning. It’s going to be a great card to just round a game out early. Earlier. 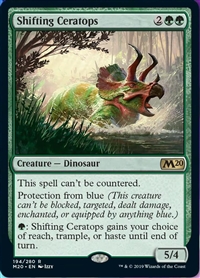 Shifting Ceratops – Ready for more anti-blue? Shifting Ceratops is definitely going to be a go-to – four drops are nothing to a mono-green deck. Shifting Ceratops is also a 5/4 with Prot Blue. It can also give itself reach, trample or haste! This adorable dino will be a monster in the upcoming meta, I can feel it. I’m also horrified of dealing with it if I’m being honest. 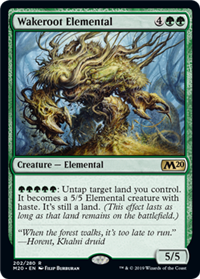 Wakeroot Elemental – A 5/5 for 6? That’s weird. Until you realize you can tape 5G to untap a land, and turn it into a 5/5 elemental! I just really like the synergy with Nyssa, if she gets her ultimate off. Now it’s an engine that can continue to create indestructible creatures! 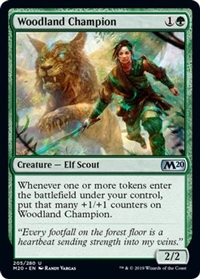 Woodland Champion – Whenever one or more tokens enters the battlefield under your control, put that many +1/+1 counters on this 2/2. Oh lord. Selesnya has a new beat stick, and it’s name is Woodland Champion. You’ll probably run four of them, and since it’s a two drop, it’s hitting the field early. If that weren’t frustrating enough, it’s an Elf, so it has obvious synergy with most mono-green decks. 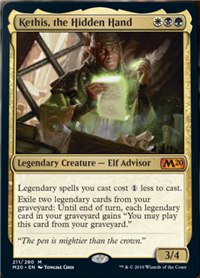 Kethis, the Hidden Hand – This is my favorite of the multi-colored cards so far. Legendary spells you cast cost 1 colorless less, and you can exile two legendary cards from your grave, so that until end of turn, each legendary in your grave can be cast from there. Not to mention, he’s White/Black/Green, so grave control is practically your MO. Lord, this is going to be one wild Core Set. This makes me want to rebuild my 5-color portal deck. 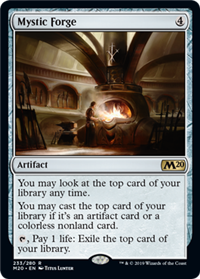 Mystic Forge – Was there any doubt it would be this? You can look at the top card of your library at any time and can cast it, as long as it is an artifact or colorless nonland. You can also pay 1 life to exile the top card if you want to peek at a different card. This card has so much utility, and I’m personally looking forward to colorless decks making a big comeback. Plus it looks like they’re making a pizza.