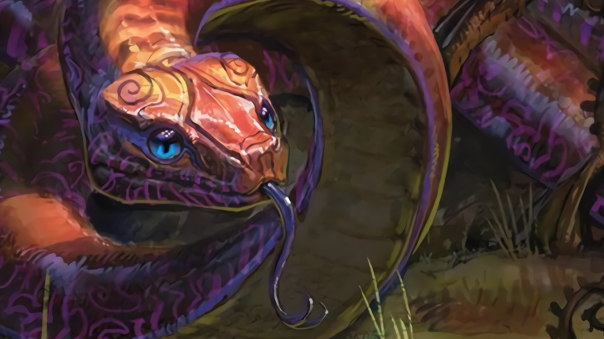 Now that we’ve had all the fun cards from the Standard Meta in for a while now in Magic the Gathering: Arena, I’ve been branching out the kinds of decks I put together to use and try to get back on the climb. A lot of my inspiration comes from seeing cards in matches and trying to figure out what to do with them. Some of my inspiration comes from getting absolutely walloped by a deck and figuring out ways to make it better/make it work for me. Just remember, copying a deck you find online won’t make you win or make you good with it. You need to understand why a deck works, what exactly makes it a success in order for it to be a success in your hands. Luckily, I’m pretty good at that, and I’m hoping that, through this column, I can help up and coming MTG players, or players in need of something new find what works for them. A definite runner up is the updates/changes to Red Deck Wins, because buddy, there is a lot of insane stuff in that now. It’s way more fun than “play creature, swing, play creature, swing”. One of the things to be wary of is how much a deck costs in real life. But in MTG Arena, Wildcards really help bolster that.

The best thing about this Black/Green deck to me? The main card in it is an Uncommon. The key to this deck in my estimation is “Winding Constrictor”, which is way too good to be a two drop. It’s a 2/3 for 1b1g, which is decent on its own, but if you or a creature would get counters of any kind, that target would receive that many plus one. So you get a few of these good, wriggly boys on the table, then you play your really ridiculous stuff. Your Jadelight Ranger and your Glint-Sleeve for more card draw. Better still, your Walking Ballista! You pay 4 colorless to give him a 1/1 counter? Nah, you get two! That’s two minimum. I don’t even use Walking Ballista to attack though, he’s my major creature control unless they have nothing on the board to stop him. This deck moves at a pretty solid clip, the mana curve being around 2 mana or so. There are some things I could change about it though. I’d like to find room for another Verdurous Gearhulk, maybe another Vraska, Relic Seeker. It runs something like 10 rares, 2 or 3 mythic rares, so it’s fairly easy to run. I imagine you could play it without Karn/Vraska if you wanted and put other creature/deck control in it. I’m tempted to remove Karn from it for another Gearhulk if I’m being frank.

Characteristics: This is not a complicated deck in any format. It’s very much centered around the early/mid-game, with plenty of control and options to slow down opponents. I haven’t seen a block with so many artifact-heavy decks since Alara, and while I love that (I do, I really do), you need options for that. That’s why one of the stars of this deck is Thrashing Brontodon, because not only is he a 3/4 for 3 (2g1c), you can tap 1 and sac him to destroy an artifact/enchantment. There are a lot of very mean ones in this meta, and you want to be aware of them, and if nothing else, use him for a preventative measure. Your opponent is less likely to play a powerful artifact if they know you can just blow it up any time you wish. This deck has a little ramp, and could use more, but with Llanowar Elves being back, you’d be foolish not to use them. It’s definitely a deck that is strong when it catches people unawares. You want those tokens to come sliding down in a hurry. Getting at least one (but I prefer two) Winding Constrictors in your opening hand is great, as long as they don’t get killed off. I’ve had three on the table at once, and it was a beautiful sight to be able to instantly kill any creature my opponent played, thanks to Walking Ballista (which is a truly undervalued card, and I stand by that). Sure, this deck has some fancy lands, and two Planeswalkers in it, but you don’t need Karn or Vraska. They’re nice, but they don’t pop up enough to really be game changers. This deck is to make people think twice about what they’re doing, to suddenly have massive creatures, and to clear the board with Walking Ballista and Ravenous Chupacabra and swing hard.

Good/Bad Matchups: Honestly, slow control decks have a lot to fear from this deck. You can potentially play your best cards much faster than they can ramp up to counter you. It’s not “Red Deck Wins” fast, but it’s pretty damn swift. With a solid start though, you can make RDW look foolish because RDW focuses so heavily on playing creatures with almost no life and swinging, you have Walking Ballista, and you should not feel scared to sacrifice it with one token, just to kill their one attacker. Odds are good they won’t have too much left if you pick them off every time they play something. However, control decks that focus on creature/spot removal (Mono-Black Creatureless is a fine example) can really just make life miserable. So can control decks that don’t need to attack to win (Second Sun, Torrent of Hailfire, Treasure Decks), and decks with one or two really powerful fliers (R/U Wizards, Any Color that runs Heart of Kiran). There are decks that only need one creature to win, and it’s imperative that you know what that creature is fast, and remove it faster. This is a pretty solid deck all around though, and the slower their deck runs, the easier time you’ll have with it. Or the slower you make their deck run. But if they spot remove your key creatures (and it’s pretty obvious which they are), it’s game over.

Black:
Duress (x1)(1B, Sorcery): Target opponent reveals their hand. Choose a noncreature, nonland from it and they discard it.
Fatal Push (x4) (1B, Instant): Destroy target creature if it has a converted mana cost of 2 or less. Revolt: If a permanent you control left the battlefield this turn, destroyed creature can have converted cost of 4 or less.
Glint-Sleeve Siphoner (x2)(1B1C, Creature – Human Rogue 2/1): Menace. Whenever it attacks or enters the battlefield, gain 1 Energy. At the beginning of your upkeep, you may pay 2 energy. If you do, draw a card and lose 1 life.
Moment of Craving (x2)(1B1C): Target creature gets -2/-2 until end of turn. You gain 2 life.
Ravenous Chupacabra (x3)(2B2C, Creature – Beast Horror, 2/2): When it enters the battlefield, destroy target creature an opponent controls.
Vraska’s Contempt (x2)(2B2C, Instant): Exile target creature or planeswalker. You gain 2 life.

Green:
Adventurous Impulse (x3)(1G): Look at the top three cards of your library. You may reveal a creature or land and put it into your hand. Put the rest on the bottom in any order.
Llanowar Elves (x4)(1G, Creature – Elf Druid 1/1): Tap: Add 1G.
Jadelight Ranger (x1) (2G1C, Creature – Merfolks Scout 2/1): When it enters the battlefield, it explores, then explores again.
Rishkar, Peema Renegade (x1)(1G2C, Legendary Creature – Elf Druid 2/2): When it enters the battlefield, put a +1/+1 counter on each of up to two target creatures. Each creature you have with a counter on it has “Tap: Add 1G”.
Thrashing Brontodon (x3)(2G1C, Creature – Dinosaur 3/4): 1C, Sacrifice It: Destroy target artifact or enchantment.
Verdurous Gearhulk (x1)(2G3C, Artifact Creature – Construct 4/4): Trample. When it enters the battlefield, distribute four +1/+1 counters among any number of creatures you control.
Multi-Colored:
Winding Constrictor (x4)(1B1G, Creature – Snake 2/3): If one or more counters would be put on an artifact or creature you control, put that many plus one on it instead. If you would get one more counters, you would gain that many plus one instead.
Vraska, Relic Seeker (x1)(1B1G4C, Legendary Planeswalker – Vraska 6 Loyalty): +2 Create a 2/2 black Pirate with Menace. -3: Destroy target artifact, creature, or enchantment. Create a colorless treasure artifact token with “Sacrifice this: Add one mana of any color” -10: Target player’s life total becomes 1.
Colorless:
Karn, Scion of Urza (x1)(4C, Legendary Planeswalker – Karn, Loyalty: 5) +1 Reveal top two cards of your library. An opponent chooses one that goes to your hand. Exile the other with a Silver Counter on it. -1: Put a card you own with a silver counter on it from exile into your hand. -2: Create a 0/0 colorless Construct artifact creature token with “This creature has power and toughness equal to the number of artifacts you control” into play.
Walking Ballista (x4)(XX, Artifact Creature – Construct 0/0): Walking Ballista enters the battlefield with X +1/+1 counters on it. 4C: Put a +1/+1 counter on Walking Ballista. Remove a +1/+1 counter: It deals 1 damage to any target.

Final Thoughts: Brief final thoughts for once! This deck feels kind of like a gamble to me. If you don’t get a solid start, there’s almost no way to come back unless the opponent you’re up against also has a rough start. It really relies on a good beginning or at least a really amazing first couple of draws. But that’s what I like about it. It’s very much “No guts, no glory”, and can do amazing things to make people just rage and increase their overall salt levels. That’s what I love, decks that just make people angry. This is one of those that made me terribly angry, and I almost never saw anything beyond the Snakes, Rishkar, and Jadelight. They would just play a few creatures and start smashing me to bits before I could do anything about it, so I took that to heart. Never be too proud to see what your opponents are doing, and make it your own. The Winding Constrictor is the way, and walking the road with him will create salt and sadness. This deck I don’t think will be breaking any records or setting the world on fire. . . but it is fun.