Magic: The Gathering Arena: War of the Spark Preview 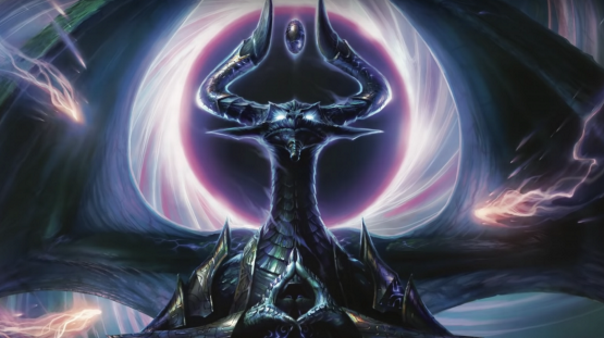 Editor’s Note: This was insanely hard to do. I avoided most of the incredible Mythic Rare planeswalkers on purpose. I wanted to highlight some of the potential more unorthodox/interesting cards. I did pick one of them, though, but it won’t be a shock.

Magic: The Gathering‘s next expansion, War of the Spark is coming on May 3rd, sooner for MTG Arena players. There are some truly insane cards in this set, and while most of them are planeswalkers, I wanted to look at just a few cards I’m really excited for. For a visual representation of these cards, I’m going to link to MythicSpoiler.com‘s visual spoiler list, so special thanks to them for having this all set up. I’m so damn excited for this set – I haven’t been this excited for an MTG expansion since I first saw Alara block. Yes, it’s been that long since I’ve been that excited. Alara is what got me back into Magic after several years away. This expansion also has interesting story potential. Some of these planeswalkers aren’t ever coming home; after all, we’re doing battle with Nicol Bolas, Dragon-God. He has to be stopped at all costs, so unlikely allies have teamed up. I had to try and avoid just picking cards that are going to be in my control decks (plural, because there’s definitely going to be more than one), so I wanted to cover as much ground as possible. 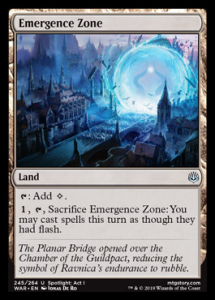 Emergence Zone (Land) – Tap for 1 Colorless (1C). Tap 1C, Sacrifice Emergence Zone: You may cast spells this turn as if they had Flash: This card is a no brainer for a lot of decks. Moreso if you can find some land retrieval from the graveyard. Pairing this card with Crucible of Worlds is an absolute must. Just do it over and over with no consequences! That is, until someone plays Ashiok, Dream Render to exile your graveyard. But until then, you can play your absurd sorceries and creatures during your opponents turn, saving your mana for counters on your own turn. (Uncommon) 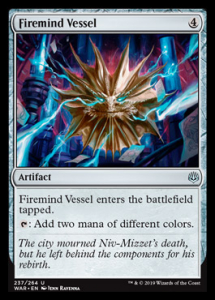 Firemind Vessel (Artifact): 4C – Firemind Vessel comes into play tapped. Tap Firemind Vessel: Add two mana of differing colors to your mana pool: Sure, it’s a four drop. But in this meta, mana ramp has absolutely never been easier. It’s better for multi-colored decks, but even in single-color decks, as long as your main color is represented, you can do a lot with this. There are also ways to untap this, I’m sure. This isn’t a game-breaker, but I sure do think it’s neat and could be used as a way to ramp other cards. Great way to get some of those mid-game planeswalkers going. (Uncommon) 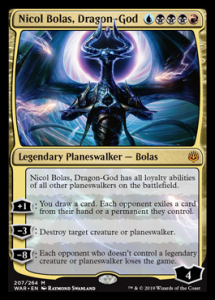 Nicol Bolas, Dragon-God (Planeswalker – Bolas): R3BU: Nicol Bolas has the loyalty abilities of all other planeswalkers on the battlefield. +1 Draw a card. Each opponent discards a card or exiles a permanent they control. -3 Destroy target creature or planeswalker. -8 Each opponent who doesn’t control a legendary creature or planeswalker loses the game. Base Loyalty: 4: How could I not include Nicol Bolas? He’s one of my favorite lore creatures, and the reason I love Grixis (RUB) so much. Sure, his passive ability is insane, because it affects opponents planeswalkers in addition to your own. It gives plenty of opportunities to power him up or sacrifice him to save your game. But consider this: He can also be used as a control mechanism. I have a mind to make some kind of obnoxious five-colored deck, where I also run Teferi to prevent foes from countering/blasting him. Simply having Nicol Bolas on the field means your opponent now has to carefully consider if it’s worth putting a planeswalker on the field at all. He’s mighty, he’s the focal point of this set, and he’s not to be trifled with. (Mythic Rare) 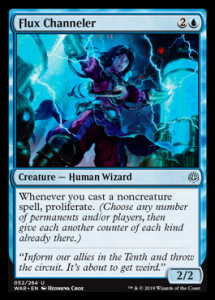 Flux Channeler (Creature – Human Wizard): U2C: Whenever you cast a non-creature spell, proliferate. 2/2: Flux Channeler is a sound reason why I won’t be running creatureless decks. Proliferate’s a powerful tool that when it’s activated, you can put a counter on each card you have that features a counter. Planeswalkers, creatures with +1/+1 tokens, you name it. Plus it’s a three drop, so while sure, that means you won’t have a turn three counterspell, it’s got a lot of potential if you hold it, or play it early against someone that can’t stop it from being played. This is a blue wizard! Do you know how many instants/sorceries come with this deck style? A. Bunch. You’re going to have more proliferate than you know what to do with. It can even pop during your opponents turn, thanks to instants/counters! Flux Channel is beautiful. (Uncommon) 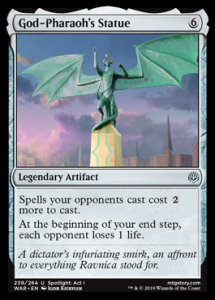 God-Pharoah’s Statue (Artifact) 6C: Spells your opponents cast cost 2C more to cast. At the beginning of your upkeep, each opponent loses 1 life: This is another “this could be great if you have mana ramp” card. In addition to forcing your opponents to spend more mana, I feel like this would be instantly targeted for destruction, which can be used as a ploy, while you play something of far more value. Forcing an opponent to react to this card could be very valuable. Plus, I like any card that stalls slows, or otherwise impedes my opponents’ ability to play as much stuff as they want a turn. Spoiler Warning: I never want them to cast spells. (Uncommon) 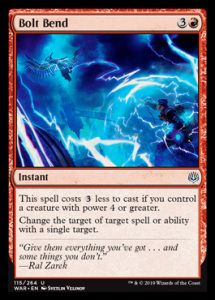 Bolt Bend (Instant): R3C: This spell costs 3 less to cast if you control a creature with power 4 or greater. Change the target of a single spell or ability with a single target: Bolt Bend! Redirect is back, baby! And it’s Red no less! Do you know what the odds are of having a 4 or greater power creature in Red right now is?! Incredibly high, that’s what! Dragons, Goblins, Steam-Kin, you name it! Aurelia! This is so easy to do, making it effectively a one drop. Is a player going to destroy your game-winning creature or planeswalker? Do they have something annoying you’d rather get rid of? Tap that mana, name a target, and cackle like a madman as you destroy their Nicol Bolas, their Jace, their dumb Phoenix, whatever you need to do! Man, uncommons in this set are good! (Uncommon)

Ravnica at War (Sorcery): W3C: Exile all multi-colored permanents: There aren’t massive amounts of insane multi-colored spells in this particular expansion but across the whole meta? You better believe it. Plus this would go great in casual play, and I think it could have a (minor) effect on Modern. This is made stronger by the possibility of casting this with Flash (thanks to other Blue spells/lands), making it a very high potential for my Esper Control deck. It could backfire and force me to get rid of Teferi, but I would probably cast this when I don’t have him on the board. This is a simple, no-frills solution to the more powerful creatures/planeswalkers in the set. Plus it’s not a “Legendary Sorcery”.  (Rare) 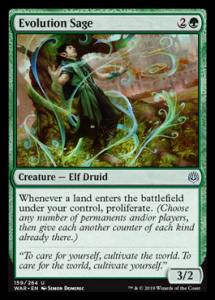 Evolution Sage (Creature – Elf Druid) G2C: Whenever a land comes into play under your control, Proliferate. 3/2: Proliferate really seems to be back with a vengeance, which makes sense with all these damn planeswalkers. You’re definitely going to play lands as many turns as possible, so Evolution Sage is a no-brainer for your UG decks. I’d even consider him in other weird decks, like BG, or mono-Green. This one I don’t have a lot of reasons to go into, its ability really speaks for itself. (Uncommon) 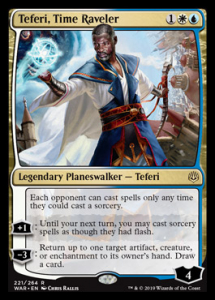 Teferi, Time Reveler (Planeswalker) UWC: Each opponent can only cast spells when they could cast a sorcery. +1: Until your next turn, you can cast sorceries as if they had flash. -3: Return one target creature, artifact or enchantment to owner’s hand. Draw a card: It’s time for my personal favorite planeswalker, in terms of my play style: Teferi! That annoying control mirror-match? The first of you to get Teferi on the board has a major advantage. They can’t counter anything else you do and have to try and destroy him on their turn, wasting further mana. Not to mention, you probably have lots of card draw and have serious potential for counterplay. You can also use his -3 to return something you own to your own hand if you want. If you’re playing something that has enchantments/curses on it or has a cast-effect you want to proc again, that might be better than removing a card from your opponents’ board. Again, he can let you cast sorceries as if they were instants until your next turn, so that’s a great choice. There are piles of great sorceries in this set. (Rare) 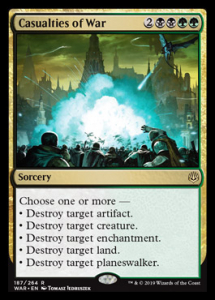 Casualties of War (Sorcery) 2B2G2C – Choose one or more: Destroy target artifact, creature, enchantment, land, planeswalker: There’s some seriously great targeted-destruction in this expansion. I was torn between this and The Elderspell (which I will run more of if I’m being honest). This lets you pick off whatever things are annoying you at the moment, and while it has a high cost, it’s definitely worth it. In a three-color/five-color deck, this could be hilarious, if you played it during your opponents turn. Oh, did they play Nicol Bolas? In response to his casting, Casualties of War! HAHAHAH. This might be the pettiest, salt-inducing card of the whole set.