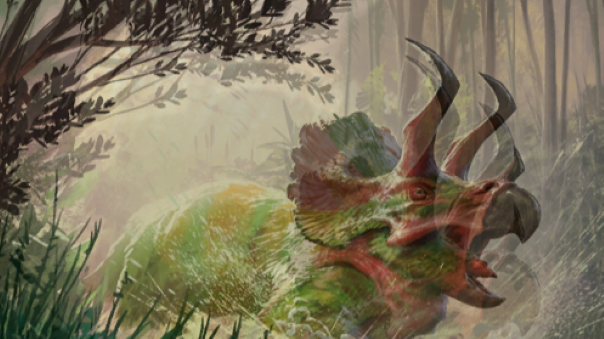 “Jurassic Park is frightening in the dark, all the dinosaurs are running wild!” – Weird Al Yankovic

With the arrival of a new season of the Magic: The Gathering: Arena Ranked Ladder, and a new set of cards, I ran into the same hurdle as always: How do I deal with the new decks that are threatening my sanity? Blue decks have unreasonable amounts of power right now, with Risen Reef and UG Flash being mighty terrors to deal with. Once either gets control of the board, it’s a very hard thing to deal with. At first, I was running a really janky Gates deck, which I’ll probably cover later on in the season, but what really started winning for me was the first style of deck that I used in Arena: Dinosaurs! But RG was not enough, no no no.

Now, there’s a massive Black Dinosaur, that 100% deserves a slot in the deck. As a 3 drop 7/6, he is the reason I wanted to build the deck. Then I saw Marauding Raptor, and perhaps the best dinosaur, Shifting Ceratops. Can’t be countered? Protection from Blue? It can give itself Reach?! These thoughts swirled together in my head, and I knew it must happen. Granted, a few of the cards will be disappearing in the fall when they rotate out.  I should get one good season out of this though. I’ve presently only lost three times with this deck in the season, so the climb has been good to me. I would say close to half of the deck will rotate out in the fall (unless they get reprints) but that’s not what’s important right now. There are cards I thought about putting in here, perhaps when things cycle out. Cards I might include Samut’s Sprint and Rhythm of the Wild so I can cast safely. I’ll worry about that problem when it comes. For now, let’s talk about some dinosaurs.

Jund Dinosaurs (Red Black Green) is all about getting ridiculously strong creatures out as soon as possible. If you don’t have at least Commune with Dinosaurs, Otepec Huntmaster, or Marauding Raptor, I would consider taking a mulligan. Those make up some of your strongest starts. You have two creatures in this deck that reduce the cost of dinosaurs (or creatures in general) by 1 colorless, letting you play stuff like Carnage Tyrant and Ghalta, Primal Hunger earlier than ever before. The most ideal start I had gave me Ghalta on the board by turn 4 or 5.  It was risky because so much of my board is susceptible to the weakest of board wipe/direct damage, but once the pain train starts rolling, it doesn’t stop. This deck definitely has weaknesses though, like a board of flying creatures. It only has one creature that has reach at all (Shifting Ceratops), and one spell to deal damage to fliers (Collision // Colossus).

As a three-color deck, you want those multi-colored lands or Unclaimed Territory ASAP, so you have the most options for playing dinosaurs. You only have one black creature in the deck, but I still use several of the black multi-colored lands, because they synergize with the other colors in the deck (Green/Red). While I may be only running one Black Creature, Rotting Regisaur is incredibly important to the deck, despite forcing you to discard every turn. Ideally, you won’t play more than one of him until you have emptied your hand. The way it should go, is you dump your hand, play your Regisaurs, so when untap/upkeep (then discard) happens, you won’t lose any cards to the graveyard. Then you can draw, and play that next card! Don’t be scared to play him early, if you’re feeling brave or your opponent doesn’t have a strong start. Sometimes, that early Regisaur is enough to get someone to surrender. If you can get the Huntmasters on board before Raptor though, don’t hesitate to start hammering your foes with Dinos with haste!

Marauding Raptor is amazing, but do be careful, because each one in play will deal 2 damage to any creature that comes into play on your side. So if you have Raptor on the board, you can’t play your Huntmaster, or it dies. If you have two Raptors in play, you can’t play Ceratop, because it will die. However, you are mostly safe with Carnage Tyrant, since it has Hexproof. It will can’t be hit with the variety of annoying red direct damage options, or be forced back into your hand directly.  So while you mostly have the freedom to play whatever, be aware that there are consequences for some of these moves. This will be made more clear when I produce a video for this deck, that’s definitely coming soon.  I know Skybilz runs a Jund Dino deck and smashed her way into Mythic with it, but I haven’t seen what her deck entails. I imagine they’re fairly similar. You don’t really run mana ramp in the traditional sense in this deck: No Elves, no green ramp cards. It’s all about getting cost reduction creatures on the board and smashing someone’s face into powder with giant, hungry dinos. However, it’s not invulnerable. Heavy creature control is the bane of this deck. Grixis Control can absolutely slow the deck to a crawl, and since it has almost no card draw, recovery is a very daunting task.

Marauding Raptor (1R1C, 2/3, Raptor): Creature Spells you cast cost 1C less. When a creature comes into play on your side, Marauding Raptor deals 2 damage to it. If it’s a dinosaur, Marauding Raptor gains +2/+0 until end of turn. This is the main ramp creature of the deck. Huntmaster makes it faster still, but this lets you deal far more damage in the long run I think.

Carnage Tyrant (2G4C, 7/6): This spell can’t be countered. Trample, Hexproof. Carnage Tyrant might be the best dinosaur in the game, next to Ceratops and Ghalta. When you drop this bad boy earlier than intended, he’s an immediate threat. Players will use their entire board of creatures to block him or be forced to use creatures that weren’t intended to block, so they don’t wind up taking 10-15 damage.

Decklist (For Importing into MTGA):