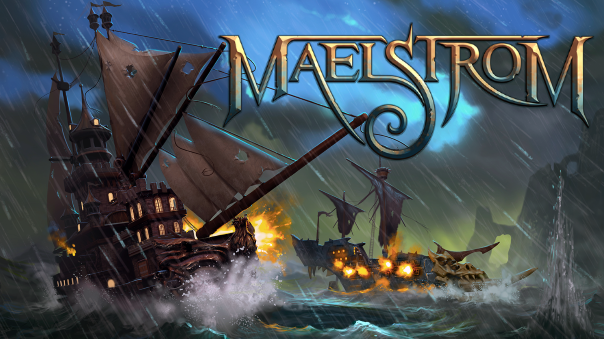 Games with ships in them seem to be an “in” thing right now. We’ve seen Assassin’s Creed Black Flag, Sea of Thieves, and Atlas, as well as others I’m probably forgetting. It seems, in fact, like one of the few things more popular than games with boats is battle royale games! So of course a battle royale game played with ships was inevitable. Did we need it? No. Did we really want it? Probably not. But here it is anyway!

Maelstrom, by Gunpowder Games, largely follows familiar battle royale gameplay structure, with some minor changes. As the game progresses a ring of “deadwater” will close in on the arena, causing it to shrink smaller and smaller. If a player is caught for more than a few seconds in the deadwater, their ship will be destroyed by one of the denizens of the deep, pretty much instantly. There’s no slow drain of health, just death.

Instead of weapon and armor upgrades, such as new rifles or a bullet proof vest, players may pick up power ups that increase damage, armor, speed etc from other smaller vessels called treasure ships. These sloops lack the armor of other player vessels and are readily destroyed leaving behind some power ups and a cache of gold. Be careful however as these treasure vessels can also pick up the power ups, and do not drop it again on death. Other players do seem to drop at least some of their power ups, and a substantial amount of gold when defeated.

Do not try to make friends with Brinemaw. He does not want to be friends. He is an angry angry sea kraken thing. Be where Brinemaw is not.

Battle continues until one one player (or one team of players, depending on mode) remains. I found battles typically lasted no longer than 10 minutes or so, thanks to the shrinking arena. There are some interesting features to the three maps that comprise the arenas, each of these having two variants. One of these are whirling maelstroms that can suck your vessel under the water and leave it destroyed. Canny players can skirt the edge of a maelstrom however for a nice boost of speed or to reverse course and outmaneuver an opponent. There are also currents within the arena that show as foaming white water, as well as fog or smoke banks in which players can hide. There are nooks and crannies to hide in that aren’t shown on the map. The arenas are generally well put together, I will say that much.

I was robbed, but not bad for my first match.

Matches themselves seem to be a major issue. Despite a fairly sizeable number of reviews on Steam (over 1300 at the time of writing this review, and about 79% positive) the game’s queue times can be quite lengthy. The game seems to accommodate for this somewhat by putting in NPC/AI opponents, which is never really a good answer. The AI is either too good, or really bad, and makes for an unenjoyable experience.

I also had an issue with the lack of originality in ship designs. If you’ve ever heard of Warhammer Fantasy battles, there is a variant for seabound combat called Man o’ War. The ship designs, and even a good deal of the combat, are entirely reminiscent of that game, in more than subtle or minor ways. 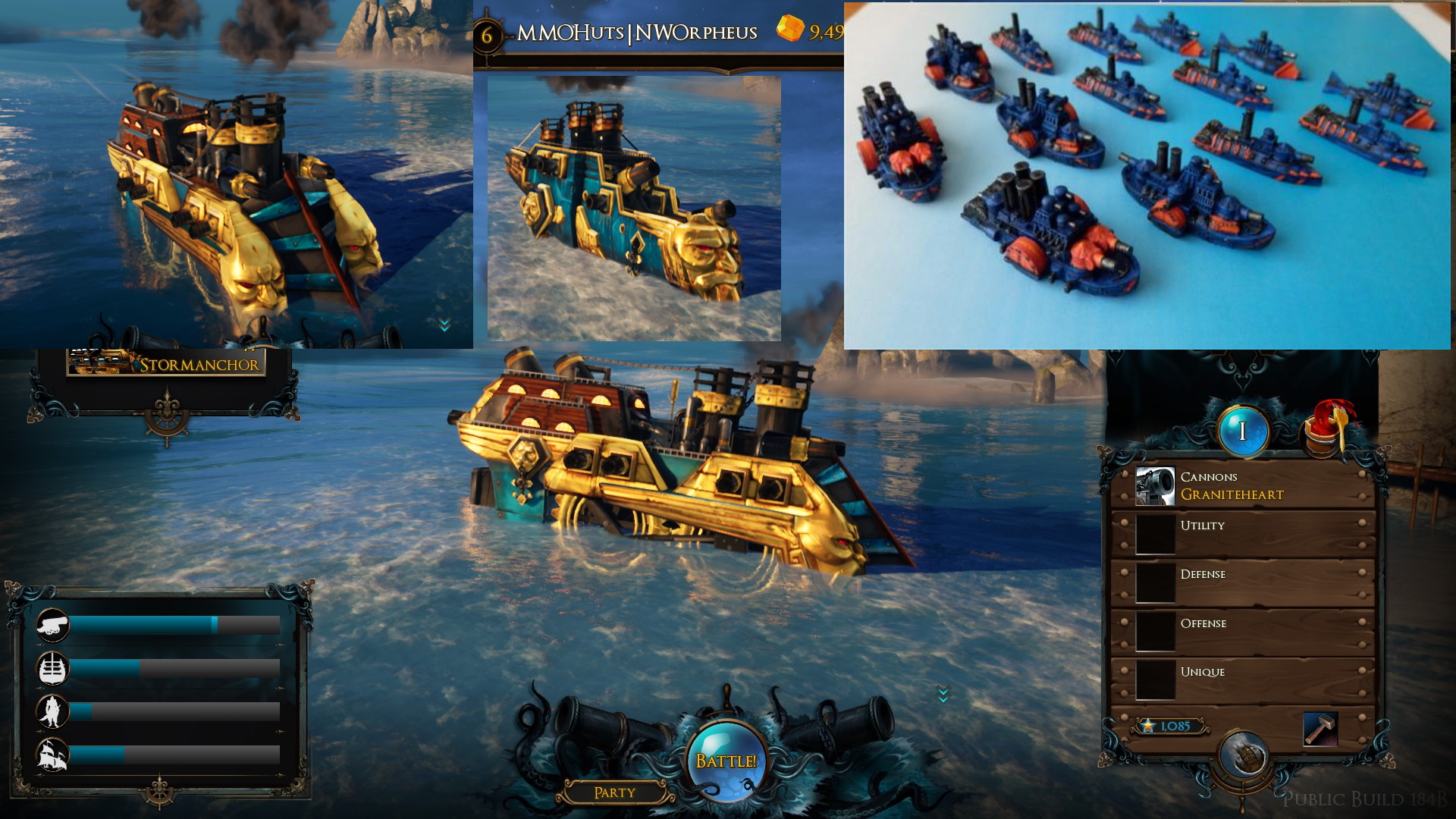 Here you see a number of Maelstrom dwarf vessels alongside some Warhammer Man o’ War dwarf ships. Notice any similarities?

The match balance system also seems to be extremely under-developed. Players with high tier legendary mates, which are NPCs that offer combat advantages, will be matched with brand new players, giving them a virtually overwhelming advantage. I’m not exactly sure how the game determines matchmaking, but it does so poorly.

Mates aren’t the only way one can advance. Gold can be used to upgrade the tier of your ships, as well as unlock additional ships. There are three races of ships to choose from, each with their own style. Humans have longer ranges, while orc ships tend to be speedy. Dwarves meanwhile have omni-directional steam powered barges with paddle wheels, and tend to pack a mighty punch, as well as taking hits well, but tend to be shorter ranged and not as maneuverable as the other races.

How do you say “Ahoy” in Dwarven?

As each ship has its tier increased, it unlocks hardpoints, which grant additional abilities (mostly passives). There are captains that can be purchased for gold as well, and these offer active abilities once assigned to a vessel.

As a free to play game, Maelstrom has some familiar money making mechanics. There is a seasonal battle pass progression system. As you earn experience for matches, you receive experience. When you reach enough experience to gain a level you gain an anchor as well as some gold. Anchors will progress your battle pass. 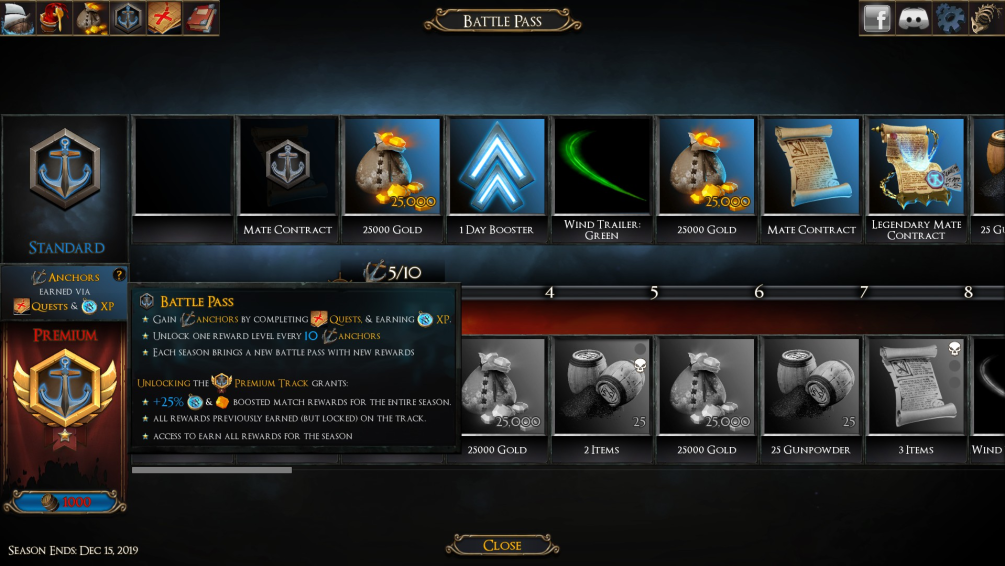 Pretty standard Battlepass at this point. You can earn the premium currency this way.

The game’s cash shop does manage to avoid most pay-to-win trappings. On the other hand, it seems to me to be drastically over-priced. I notice that a ship skin, which is really just a very basic recolor, cost 2500 gunpowder. Roughly $25 USD.

There is a rough roadmap on the website for Maelstrom which suggests that a fourth playable race, the Undead, is coming. This, to me, just reaffirms its inspiration from Warhammer fantasy battles.

To be quite frank, if this wasn’t a battle royale game, and didn’t lean so heavily on the Games Workshop aesthetics, I’d probably be a bit more into it. As it stands, I wasn’t overly impressed with the play style of the game, and I was definitely unimpressed with the toxicity displayed on the game’s chat. Unless you’re a diehard battle royale fan, Maelstrom probably isn’t worth your time, and even if you are, the bugs, poor matchmaking and lack of balance between ships is liable to be a turnoff.