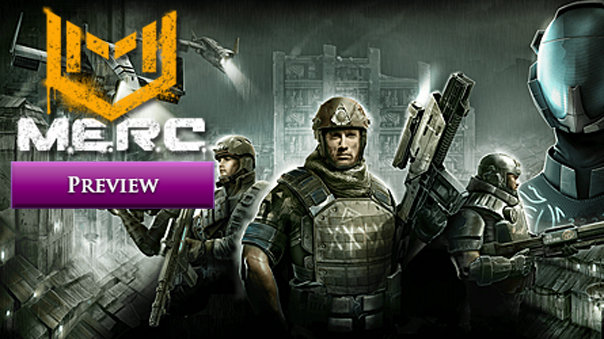 Introduction
M.E.R.C. is a strategy game brought to us by indie developer TinyMob Games. You may have seen their mobile strategy game, Tiny Realms, but this is their first attempt at a PC-based strategy game. However, as they proclaim on their website, TinyMob is made up of industry veterans who have developed for just about every platform out there, and it shows. Once you get into M.E.R.C. you’ll find yourself faced with a game that has much of the polish one might find in a AAA title such as Xcom. So, without further adieu, let’s hop straight into the review of M.E.R.C.

Customization
This is one of the areas I was pleasantly surprised with M.E.R.C. I wasn’t expecting much in the way of customization. However, you do get a decent amount to choose from. You can choose the units for your squad, upgrade them and give them better equipment, and generally all you’d want to do in this type of game. If you’ve played Xcom, it’s similar to that. Speaking of Xcom, you’ll see me mentioning it a lot. They’re both quite similar but still with enough differences to set them apart as unique games. 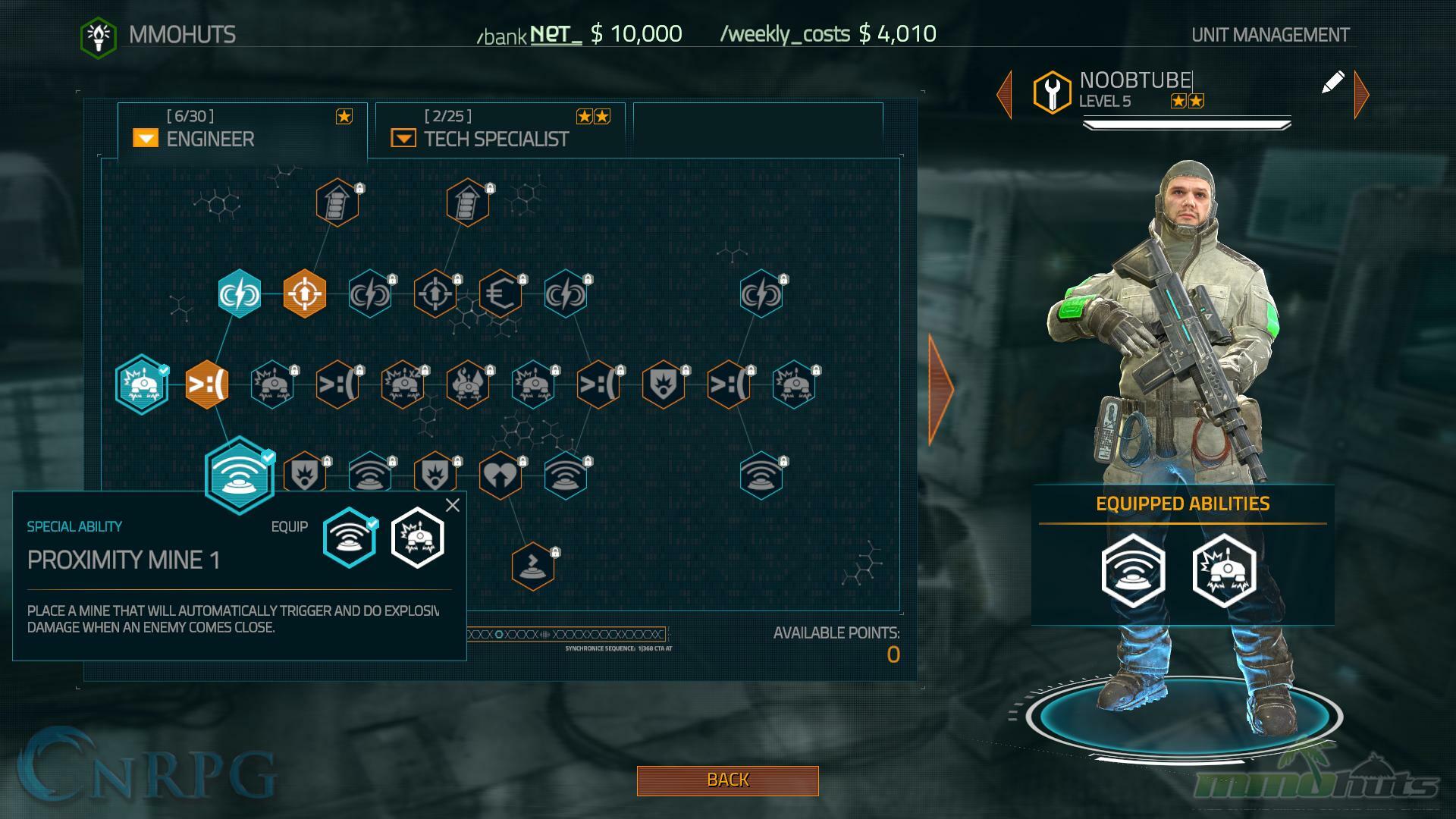 You get a lot of freedom to specialize your units.

You can customize your units’ names, spend ability points in their ability trees, equip up to two abilities at a time, unlock and select Talents and Flaws, and customize gear. Gear includes a weapon slot, a helmet slot, a chest slot, and a leg slot. You can really beef up units you like if you’re willing to put in the funds. One really nice “fluff” feature I found endearing was that each unit has a set of generated stats that don’t really matter. For example, each unit has a height, blood type, and age. There’s more, and they have (so far as I’ve found) absolutely no bearing on actual gameplay, but they sometimes make your units feel a lot more important.

Graphics
The game looks great. The style is quite realistic, but with a slight twinge that almost makes it feel cartoony at times. It’s hard to explain, and you’ll probably only understand from looking, so I suggest checking out my screenshots and maybe a video. It’s a dark and gritty cyberpunk world, so lots of the locations are dark, with lots of shadows, steam, and it’s odd if it isn’t raining, giving everything a slick sheen. In terms of effects, they’re great. Gunshots look nice, the lighting is pleasant, and explosions are fun. Pretty much perfect, in terms of graphics. 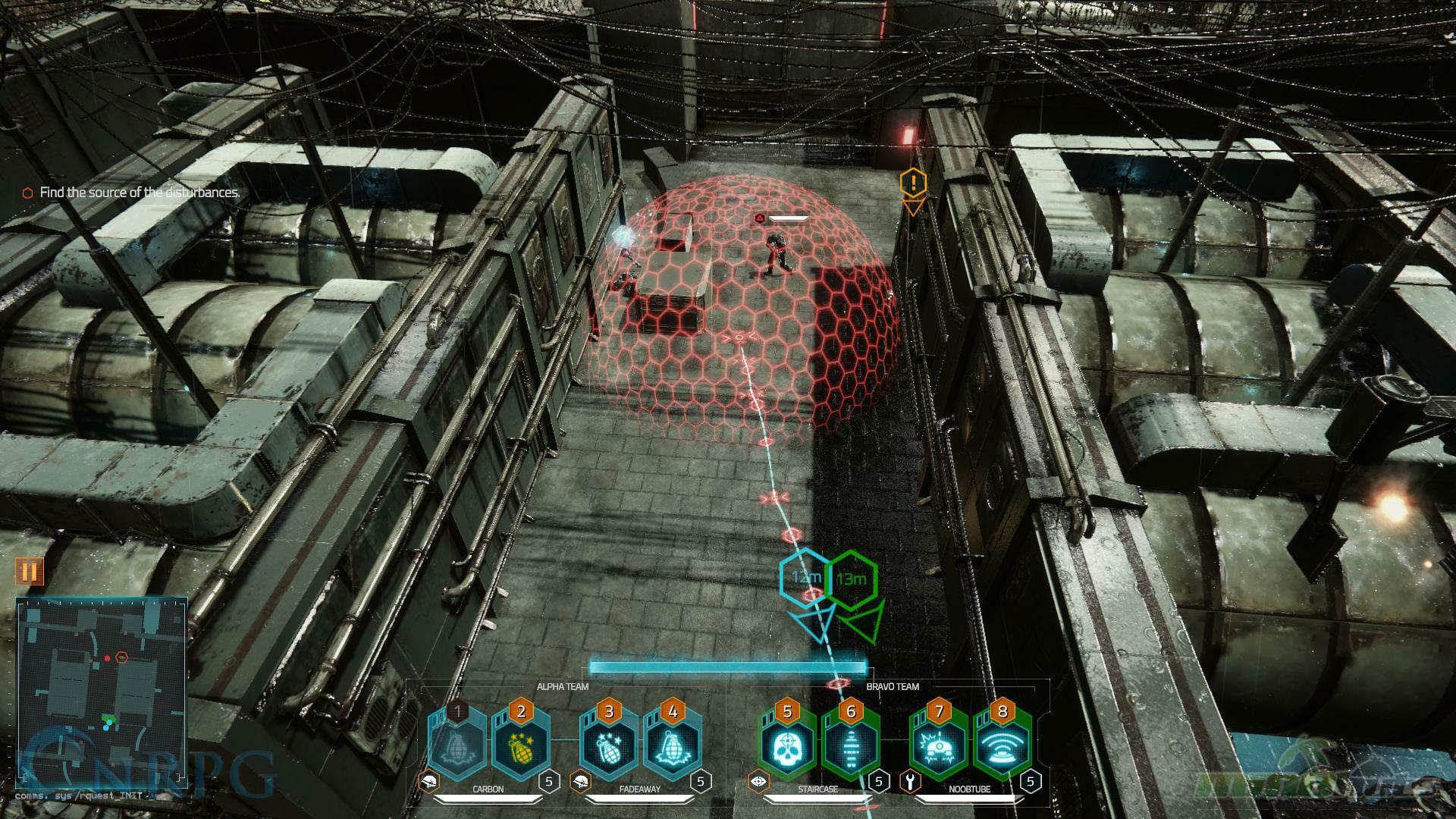 These are the maximum settings, hopefully this screenshot can give you a decent idea of what the game looks like.

Controls
This is the only place I found any issues with the game. Not much, honestly, but there were some hiccups. If you check out the game’s Steam page, you’ll find I’m not the only one that had issues. You’ll only find a few people who felt that the issues were enough to sour the experience of the game, though. It’s also in Early Access, too, so there’s still plenty of tweaks and changes to come before it reaches its final state.

I do want to say that, while I saw some complaints on it, I found the camera to be relatively nice. Perhaps it’s because I’m playing the game after some updates have been released, but I enjoyed the way it worked. It will follow your selected units by default, or you can use WASD to move the camera a limited range around the units to get a bit of a better idea of what’s to come. You can rotate around the point-of-focus of your camera using the left or right mouse buttons, too. There’s also some nice options for quickly switching between – or selecting both – of your teams, too.

Community
Though the game offers multiplayer, such as Co-Op, there aren’t too many people playing. It’s understandable, considering the game is in Early Access. For example, though, if you head over to Steam Charts you’ll find that in the last thirty days, there was only a peak of seven players online at the same time. The average is much less. So I suggest getting this game with a friend if you want to play with someone. The game doesn’t hinge on that, though, so don’t be discouraged.

Gameplay
Like I said previously, this game is quite similar to the Xcom series. Similar in that you have a base, which you upgrade so that you can upgrade your units, and then send said units out on missions from said base. You’ll fit right in if you’ve ever played Xcom. It’s also quite different, however. Xcom is turn-based, while M.E.R.C. is real-time strategy. So, if you enjoy RTS games that focus on smaller squads and also like the general gameplay of Xcom, you’re going to enjoy M.E.R.C. 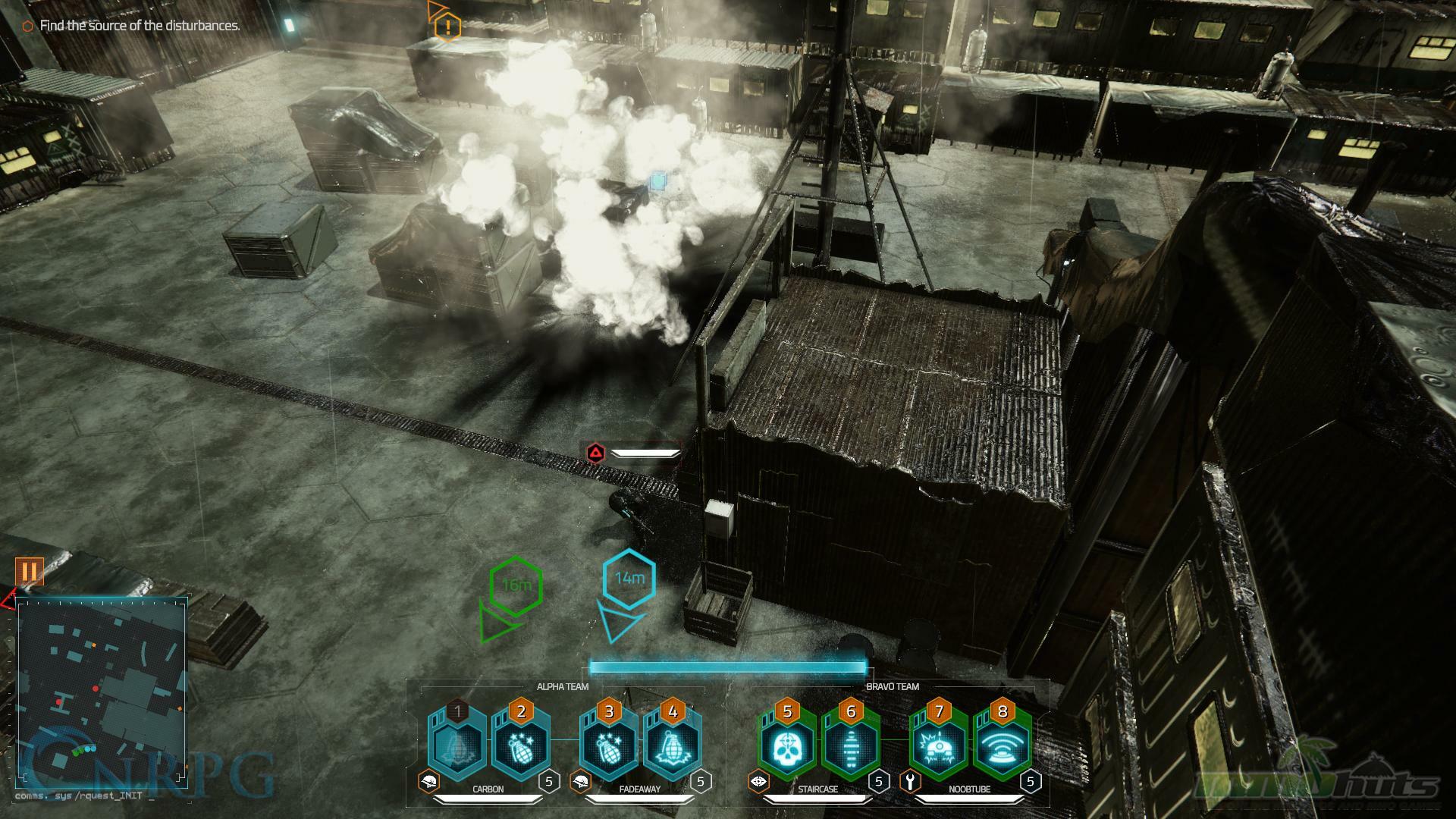 I love the grenade mechanics in this game!

I’ll start off with the primary focus of the game: Combat. The basics are just that, but the tactics can get advanced. Units are moved via a right-click system, with an automated Cover-system included. All you have to do is click on an object that can be used as cover and your units automatically set themselves in the best position to cover from enemy fire. You’ll use a combination of abilities (which take the form of things such as frag or stun grenades and drones) and regular weapon fire. Sometimes you can get creative with the environment, too. It’s a simple system that allows for a lot of fun, which I appreciate. 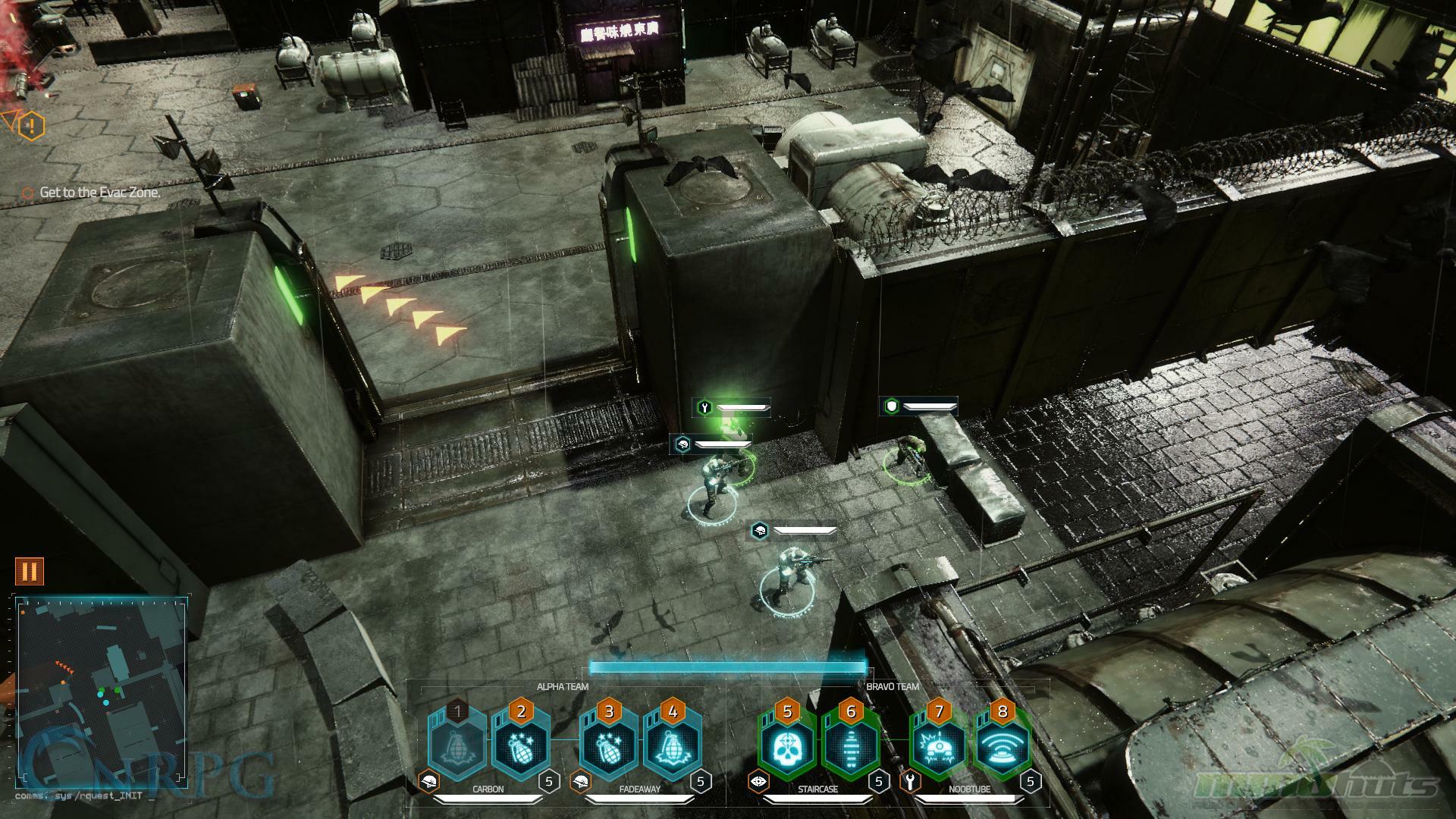 A nice feature that helps keep things from getting too overwhelming.

Although the combat is real-time, there is a thing called “Tactical Time.” As the name implies, it’s something that gives you a bit more time to assess your tactics. In short, it slows down time. It’s somewhat similar to something like V.A.T.S. in Fallout. When activated, it consumes a finite energy source that regenerates whenever you’re not using Tactical Time. Early on, you won’t be using it too often. But as you get access to more difficult missions, you’ll find yourself relying on it more and more. I really liked the system. 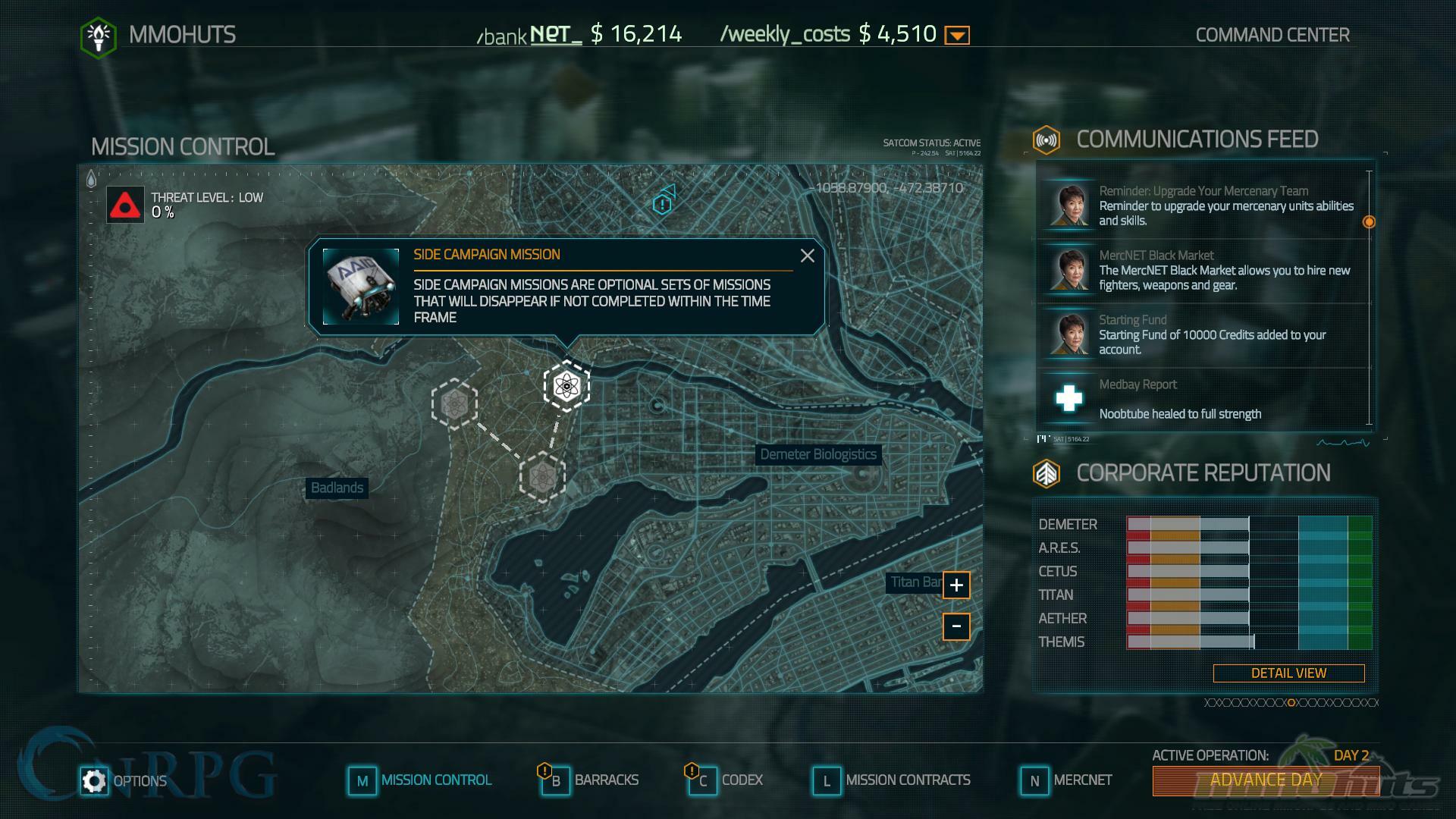 This is the 'overworld' of the game, where you select your missions and can view your standings with the various corporations.

One of my favorite things about the game is the setting. You’re in Neotopia, the last city on the planet. And what a city it is. It’s massive and controlled by mega-corporations that have sliced it up into corporation-controlled territories. Surrounding the corporation-controlled portions of the city are the Slums, and outside of that are the Badlands. When you’re first making a name for your Merc Company, you’ll find yourself working in the Slums a lot, and the rewards will be fairly shallow. As you advance, you’ll find yourself hired out to the various corporations – allowing you to raise your reputation with them, or inadvertently lowering your reputation with some – within the city itself. 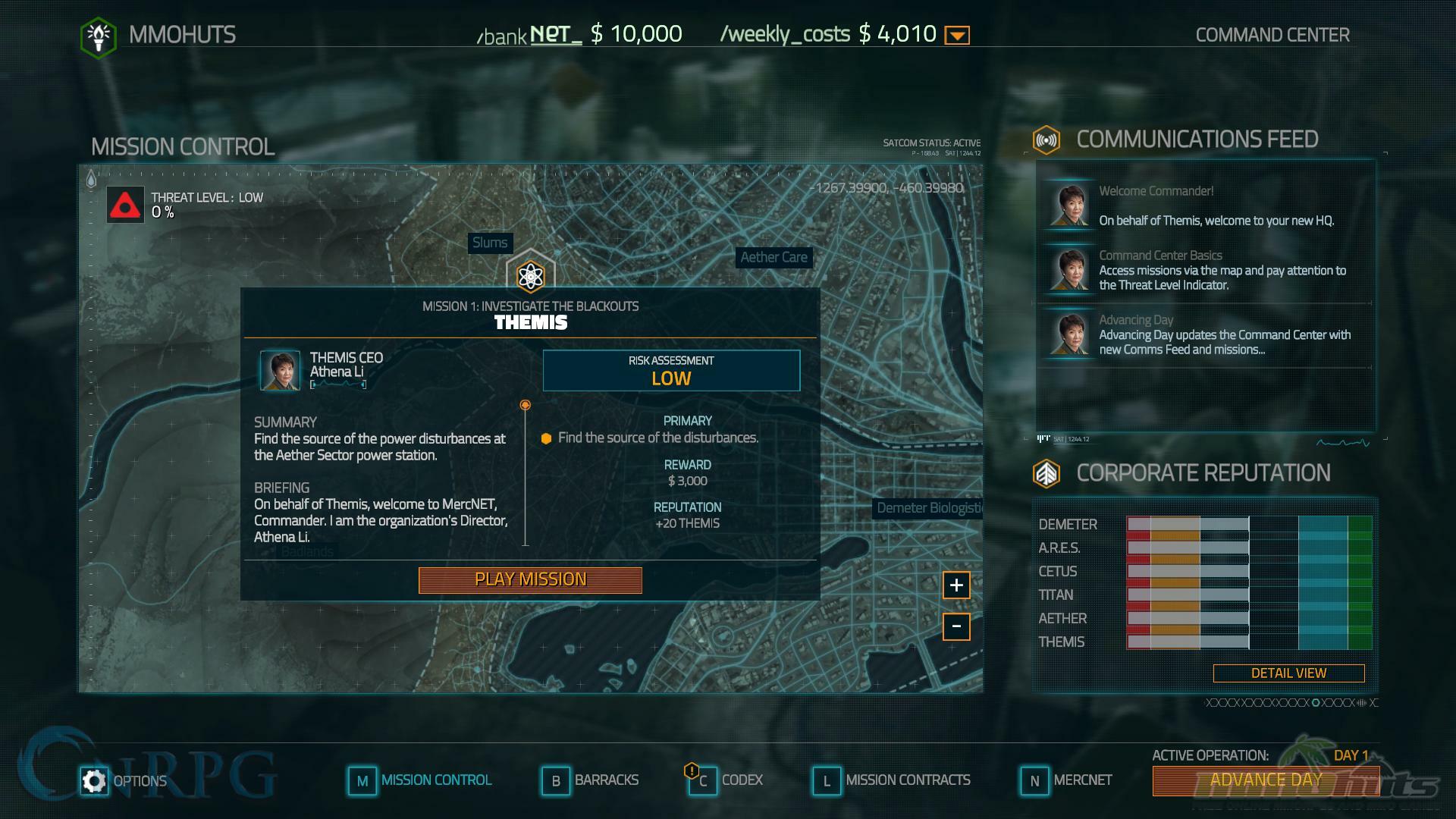 I really enjoyed the style of missions.

The missions themselves are fairly basic, usually. You make your way through a map that is designed in the typical ‘Dungeon Crawler’ style, made up of ‘rooms’ and ‘hallways’ between said rooms. Of course, you’re in Neotopia, so the ‘rooms’ are actually open courtyards and the ‘hallways’ are actually allies, bridges, and the like. Each mission has an end objective, and you’ll have to clear each portion of the map to get to the next. Sometimes you’ll find loot boxes that give some useful rewards – usually credits or Squad heals – along the way. I really liked the missions in the game because they felt nostalgic and brought back fond memories of similar games I’ve played over the years. 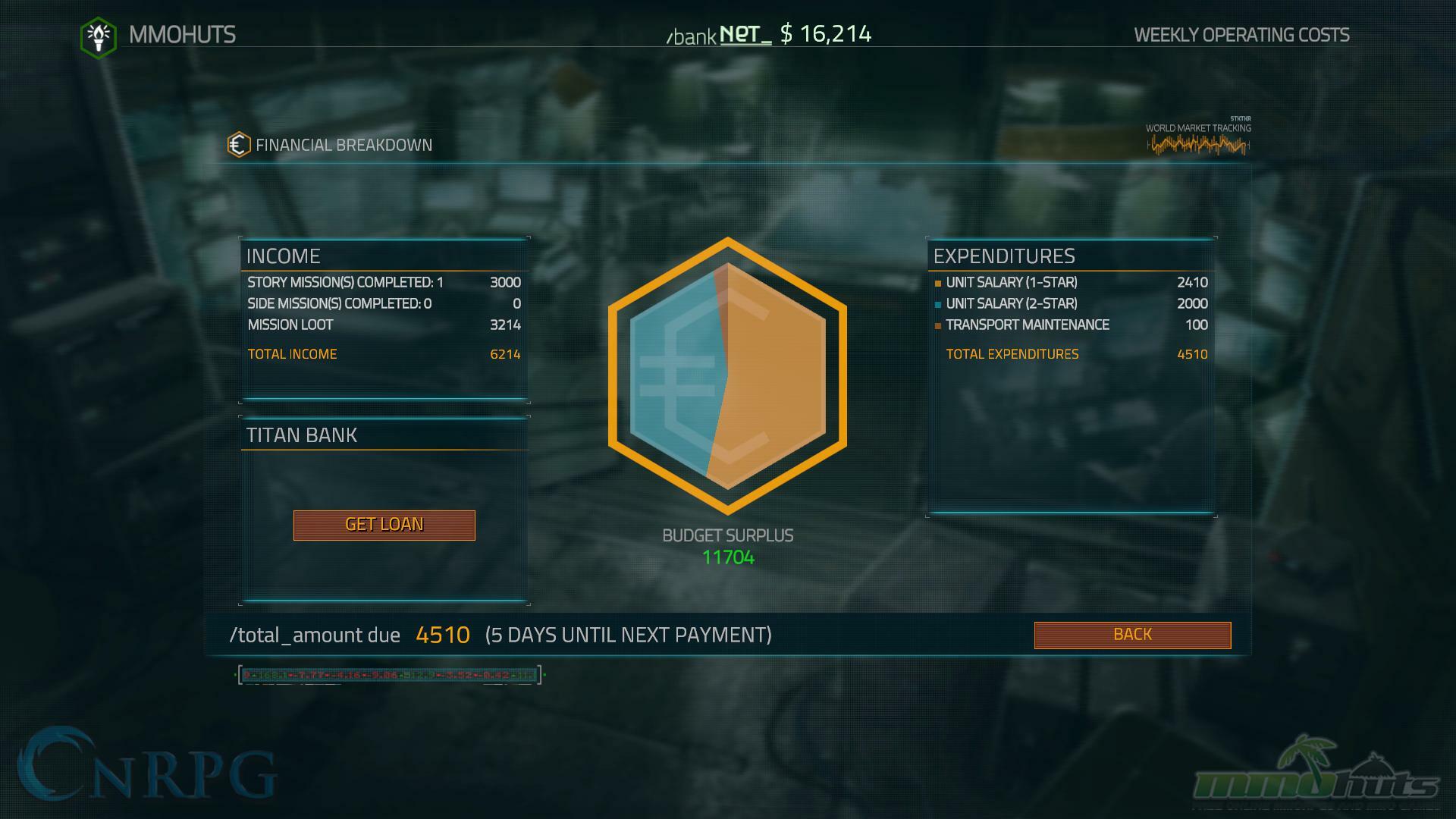 Titan Bank is where you'll take care of your finances.

Missions also provide you with funds in the form of credits. You’ll need credits to pay your employees, maintain your transports, and cover various other fees. As the campaign advances (by pressing the ‘Advance Day’ button on the bottom right-hand of the Overworld map), you’ll find that you’ll have various expenses to pay-out on a weekly basis. On top of that, you’ll need to pay for new equipment for your units to keep them competitive. All of your finances are handled by Titan Bank, who can also provide you with loans to help increase your funds if you need to make some big purchases or need a bit of help with your bills. However, I suggest trying to avoid this as Titan Bank is a bunch of blood suckers that will only give you high-interest, short term loans that can be a hassle to pay off if you’re not careful.

Conclusion
M.E.R.C. is a fantastic game. No doubt it is the best single-player experience I’ve had in some months and it’s still only in Early Access. The only real downside (or maybe it’s an upside, considering how most Free-to-Play games go with their cashshops?) is that it has a price tag. Seeing how TinyMob Games’ only other game is a Free-to-Play mobile game, however, I imagine that at release we may see that the game loses its twenty dollar price tag and is made free. Either way, I say that M.E.R.C. is worth your money and you should pick it up if you enjoyed Xcom and real-time squad-focus strategy games. So far it has a “Positive” rating on Steam, and it has been receiving multiple updates each month from the developers. I feel most people would struggle to not be happy with their purchase.

Features: 3/5 – Nothing mind-blowing, but certainly nice.
Customization: 4/5 – More than I expected from the type of game this is.
Graphics: 3/5 – I enjoyed them, but I felt I should have gotten a bit more.
Controls: 4/5 – Nothing negative in my experience, but nothing impressed me either.
Community: 2/5 – This isn’t a game that you play for the community.

Overall: 4/5 – Definitely worth the money and offers hours of fun!