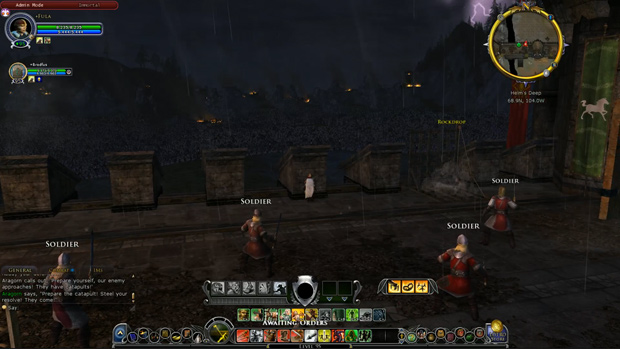 Lord of the Rings Online (LOTRO) hosted another dev walkthrough of their upcoming Helm’s Deep expansion, this time covering the “Epic Battles” system being implemented into the game. Epic battles are a new way for players to approach the gameplay and storyline, by dropping them smack into the middle of a teeming army of thirty-thousand orcs and wild-men, and asking them to defend using not just combat skills, but an assortment of strategies and environmental interactions that will (if everything goes smoothly) provide players with an unprecedented, dynamic PVE experience.

Turbine’s experience with PVE-centric MMORPGs began with Dungeons and Dragons Online, with the relatively aged Lord of the Rings Online being their most recent and most successful enterprise in the genre. Experienced gamers will remember they were one of the first studios to make their games not just successfully transition from pay-to-play to free-to-play, but thrive in the process. Their F2P models were ambitious for their time, and their continuing commitment to an understated aesthetic in LOTRO makes them unique in a sea of games screaming for attention with gigantic armor pauldrons and seemingly “epic” worlds where people have wings or ride motorcyles-gryphons, or whatever.

The understated ambition and competence of Turbine’s LOTRO team was demonstrated to me once again with this walkthrough. While I went into it expecting just another raid-esque PVE encounter, what I found was a team of people so dedicated to preserving the vision of the Lord of the Rings books that they’ve been hard at work for over a year implementing and overhauling an aging game engine just to make a battle of thirty-thousand versus one-thousand seem truly epic. Rather than relying on flash, LOTRO delivers substance. When you first step out onto those ramparts and see the horde, you’ll know what I mean. 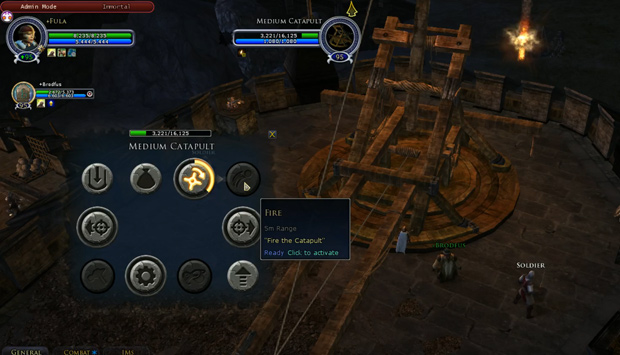 The orcs assembled on the field of battle aren’t just scenery, either. They send in very real waves of six-hundred at a time, usually accompanied by a catapult or other siege weaponry. These ordered regiments can be seen below, and attacked by players utilizing catapults and other defensive installments; in teams to make it go faster, or alone. If the PC engineers on the catapults are good enough, they can significantly reduce the number of orcs that climb up the walls. One kill on the field below counts as a kill above. There’s no reason not to unleash hell as soon as the fiends are in sight.

Players will be in the midst of a number of organized NPC allies who will clash with the orcs that inevitably climb the walls using ladders and grappling hooks. But why stand and fight them like a sucker, when you can run along the ramparts and disengage ladders and hooks to keep more from climbing up? Better yet, why not do that and drop traps, like tripwires, caltrops, and bear traps for them to step into as soon as they reach the top? This, and the efficient operation of siege weaponry like catapults, is the purview of the engineer.

But what is the engineer? A new class? No. Similar to the customization and building of a soldier in LOTRO’s famously popular skirmish content, Helm’s Deep rewards players with brand new role trees that can be customized regardless of base class, entirely separate of all other content. These “epic battle roles” are the engineer, the officer, and the vanguard. They are deep, rewarding trees that confer enormous benefits in their chosen specializations, and as players win battles in Helm’s Deep, they earn more points to invest. 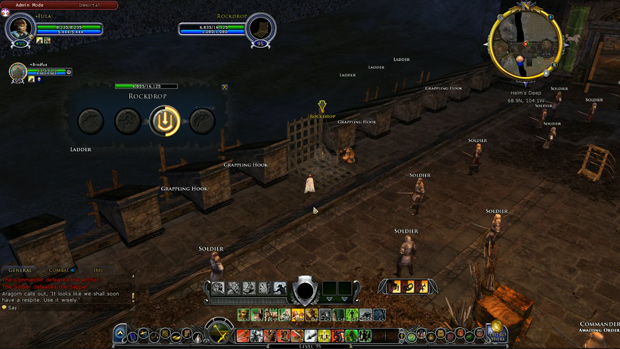 It’s not all traps and catapults, though. Some of us prefer to take a wider view of the battlefield. Some of us play strategy games on the side. Some of us were born to be officers. The officer role is what it sounds like; it allows you to not only gain unique interactions and methods by which to buff your NPC allies, but also improves your ability to interact with the unique “commander” NPCs, who take your orders and give them to the grunts. Want the men to prioritize those scampering goblin sappers whenever they appear, in order to protect your siege equipment? Let the commander know. Want to rally and boost your allies under a powerful banner? This and more is available to the officer. Your NPC commands and boosts become exponentially more powerful as you invest in the officer tree, until you are eventually a paragon of strategy and battlefield administration. 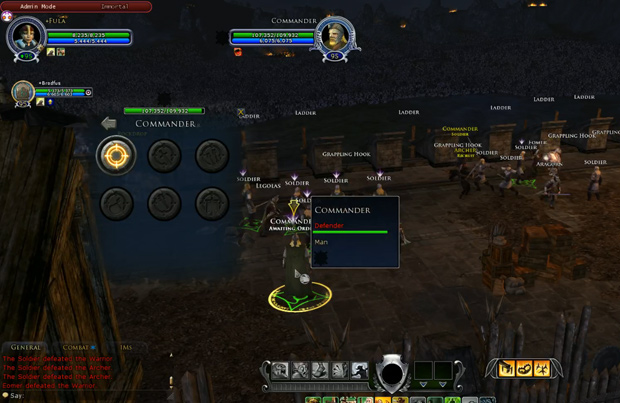 But to hell with all of that. You rolled a combat class for a reason. You’re here to smash face. And as a vanguard, smashing face is what you do best. You’ll be given enormous battle-cries and AOE nukes with which to obliterate and stun whole platoons of enemies, and increasing stat bonuses based on your kill-count. But it isn’t fair, you might say, that those officers and engineers have relatively safe jobs, while you’re out risking your neck for the battle. If you die, that’s it, isn’t it?

Vanguards have a mechanic attributed to them called the “heroic death.” When you die gloriously in battle, your kill-count factors into a scaling AOE buff that drives your allies into a frenzy of potency and power. Your heroic sacrifice could be the mighty deed that brings the rank and file up into a higher state of glory, giving them the courage and inner strength they need to hold the line, or even push it back. The life of a vanguard is not one of just any other soldier on the field. You’re designed to be a true hero, and those around you react as such.

The rewards of Helm’s Deep are not just in increasingly fun and dynamic gameplay as you invest into your chosen role (or hybridize, as many are wont to do). There are material rewards, which scale depending on which medals you’ve achieved in the battles of Helm’s Deep. The simplest explanation is that you receive a grade after each battle: from bronze, all the way to platinum. The four ranks are given by securing and protecting secondary objectives, as well as a myriad of other things. How many soldiers died on your side? Were your siege engines destroyed or badly damaged? These factors and more determine your ultimate reward, and you don’t have to play the battle over and over to have a chance at the powerful jewelry rewarded at the highest ranks. If you get platinum on the first try (which the devs assure us is next to impossible), then you receive your gear, the full amount of points to invest in your role, and can move on. It’s that simple. 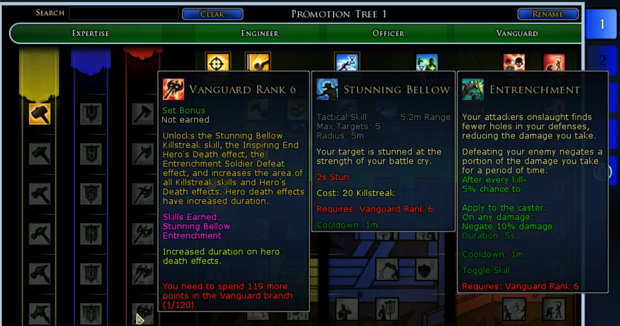 This is all in addition to the fact that the content is available immediately, starting at level ten. Players of low level will be upscaled to level ninety-five, with their gear and stats following suit. They will not receive new skills, but they will be a passable combatant on the battlefield. This is going to allow players the ability to group and enjoy content cross-level, something that LOTRO sorely lacked before Helm’s Deep. Devs stated a desire to implement upscaling to other, older content in the future, but would like to see how everything settles after the launch of Helm’s Deep.

It’s reassuring that Turbine has such a keen dedication to lore, canon, and substance over flash. Their focus on truly substantial and immersive PVE content sets them apart from the competition, and is the primary reason why the award-winning LOTRO is still considered one of the finest MMORPG experiences on the market. Helm’s Deep isn’t just bringing a new way to enjoy the tired, old MMORPG model with epic battles; they’re revamping threat mechanics and core class progression. They’re bringing in improvements to mounted combat and monster-play PVP. Turbine shows their competence by pushing themselves to meet the expectations of quality from both long-time fans of their game, and fans of the books and movies. This is not a game that settles for less.