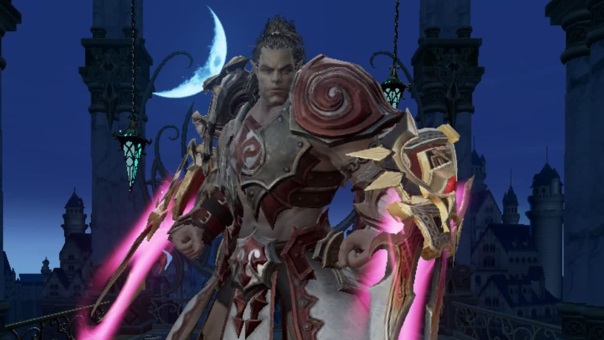 I was admittedly curious when I saw that NetMarble was releasing a new class into an established online mobile game like Lineage II: Revolution. I enjoy Lineage II, but I don’t find myself playing that many mobile games in my spare time, but I was curious to see how this would go. Starting over and leveling again sounded like a whole lot of work. Fortunately, NetMarble saw that too, and Orc characters do not start at level 1. Instead, they begin at 180, at the point of the first Class Transfer. So Orcs begin with an upgraded class (Raider, Monk, Shaman), but unlike the other races, only have one option. They don’t get two 1st class options, which I was sort of disappointed by.  Orcs themselves are an integral part of the story, so I’m not going to spoil anything I saw in their quests about why they are now an option to pick from. This area will also have tutorials for new players that you can skip, should you not need them. I also appreciate that leveling feels like less of a chore and that there are growth-boosting events to look forward to. Leveling from 180 to 260 will also give new equipment each level. I mostly have received consumables, Adena and the like in these. While I was hoping for more Armor Chests, the potions, elixirs and Exp Potions very much come in handy in some of the more challenging content.

While I was playing as an Orc for the first time, I came to the conclusion that this is arguably the best time to get into Lineage II: Revolution. If you’re new, and not really interested in grinding a character from level 1, or even a lapsed player, you can start at level 180, with 500,000 Combat Power, and will also be given a set of SR weapon/armor/accessory to get you going. Orcs also use different weapons from the other races. Orc Warriors use dual swords, Rogues use Claws, and Mystics use Wand and Shield.  Returning players and players who have already level-capped will no doubt enjoy that the Orc race has Orc-exclusive quests and fields to explore, so there’s lots of new content coming in with them. Returning players will also enjoy the new area (Southern Immortal Plateau), as it’s a very scenic and enjoyable area to run around and demolish the wildlife in. The level cap also went up in this Orc update (up to 320), and a new territory also came with it. Avento is the new area and has three regions – Dragon Valley, Promised Land and Ancient Dragon mountain Range. There are 12 new monsters and 21 new Monster Cores there as well.

The biggest thing that I was worried about was the Orc starting level. At first I wasn’t sure that it was such a great idea to start them off at level 180, but I came to the conclusion that ultimately, it’s a good thing. Returning/current players can start one without having to grind all the way from level 1, and if they decide to make that their new main, it’s not as soul-crushing. Combine that with growth-boosting events, if you decide you like Orcs more, it’s more manageable than starting at level 1 again. This update also brought with it Second Class Transfer, Part Two, so Orcs start nice and close to start part of the game (level 271), and have ready access to the Chapter 5 through 7 quests. Another feature that will help Orcs advance, is that the Tower of Insolence expanded up to floor 145, and added an auto-progression feature. Now, if you’re busy and want to climb through for rewards, you can just turn on auto-progression. This is also great for players who are having a hard time with higher floors, they can grind through the lower ones on auto-pilot until they can challenge the more difficult encounters.

Since the Orcs have a considerably different starting location from the other race, but they will ultimately merge into the regular story that non-Orcs get to play through. This is lovely because there are few things more annoying in an MMORPG than playing the same tedious, early quests over and over. It felt like I wasn’t just playing the same beginner stuff, but really diving into the headspace of being a noble Orc. Another important feature to me is that they do not seem to be traditional fantasy Orcs. They’re not bald green-skinned buffoons. To me, visually, they resemble some kind of Elf and Human cross-breed. They have the pointy ears, human-style hair (tightly-packed cornrows are an interesting choice), a dusky skin tone, and are well-spoken. The orc used in the splash art for the game looks more like a regular Orc, but my in-game character does not. Noble Orc is not an understatement. It’s always nice to see a company forgo the fantasy standard and do something a little different. When you release a new race into a game, it’s important for them to not be the same old, same old, while not leaving the current players in the lurch. Orcs don’t bring something amazing that other races don’t, except exclusive weapons. They do not appear to be “better”, just “Orc-Exclusive”, and that’s fine.

Though I was initially leery of the Orc, I love their aesthetic, and I enjoyed being able to start at a high level while still having a lot of room to grow and explore the game. Level 180 is a nice middle ground – You’re powerful and can do a lot of story/dungeon content, while not being an unstoppable dunking machine. They look badass, aren’t typical fantasy Orcs, and while they only have one option for Class Transfer (for class transfer 1 and 2), they aren’t the same as the typical rank-and-file Orcs you see in the game. The Noble Orcs are incredible and fun, without feeling like they’re replacing some of the other races in the game. There’s definitely some give and take, especially with class choices. Ultimately I think they’re fun, and I like playing it. The Orc Monk’s awesome claw weapons really sold it for me. They also come with a useful passive – Noble Orcs receive high base Defense and Crit Resistance. Players are also given a fifth class slot, so they are free to make an Orc, should they desire to. I also feel like players who are struggling to upgrade and get awesome gear will enjoy trying out Orcs, since they start with +20 enhanced SR gear (after completing a few quests), and have a pretty easy time growing. They look and feel fun, and I think if you are looking to get back into Lineage II, it’s an incredible time to do so.