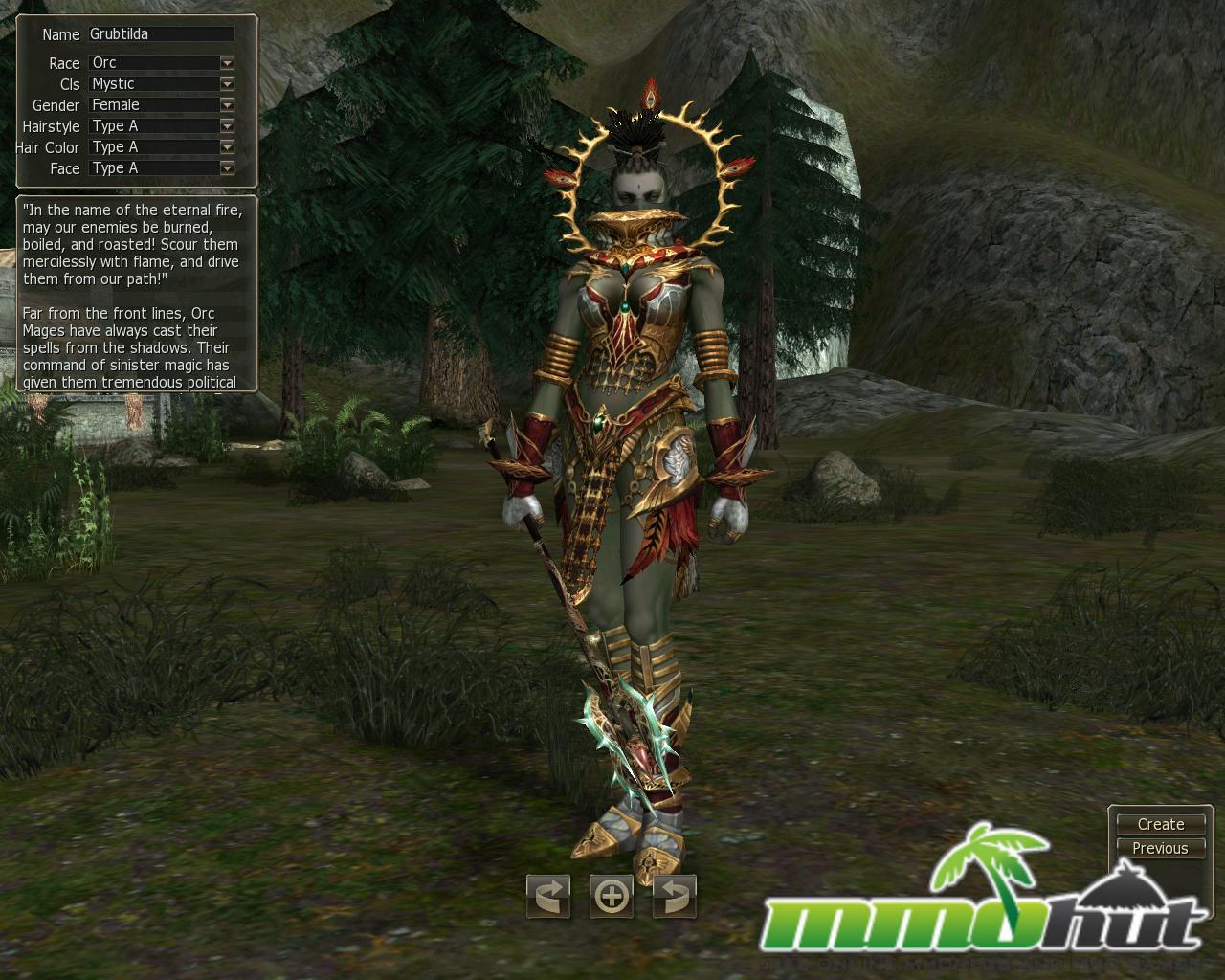 The Korean studio NCsoft arrived on the MMORPG scene with Lineage in 1998 which exploded in popularity across Asia. Now, they are one of the major players in the industry with big name games like Aion and Guild Wars. They even publish a few free to play games like Dungeon Runners, and Exteel. But back in 2003, NCsoft released a prequel to the original Lineage titled Lineage 2: The Chaotic Chronicle. This was a year before World of Warcraft dominated the pay to play arena. Lineage 2 improved upon the original in all areas, but it never changed the basic grind based gameplay.

NCsoft has a love-hate relationship with free trials. Unlike almost every other major P2P game, the Lineage 2 free trial is not universally available. It arrives for a month or two and then disappears again as quickly as it came. In early February of 2010, the re turn of the free trial was announced and has given veteran and new players alike a chance to experience everything Lineage 2 has to offer. The trial period is 14 days and requires no credit card information. The client download will take some time, at nearly 5 gb it is quite large. The recommended available disk space for the game, fully installed, is 12 gb so even though this is an old game, it still deserves the first ‘m’ (massively) in MMORPG. 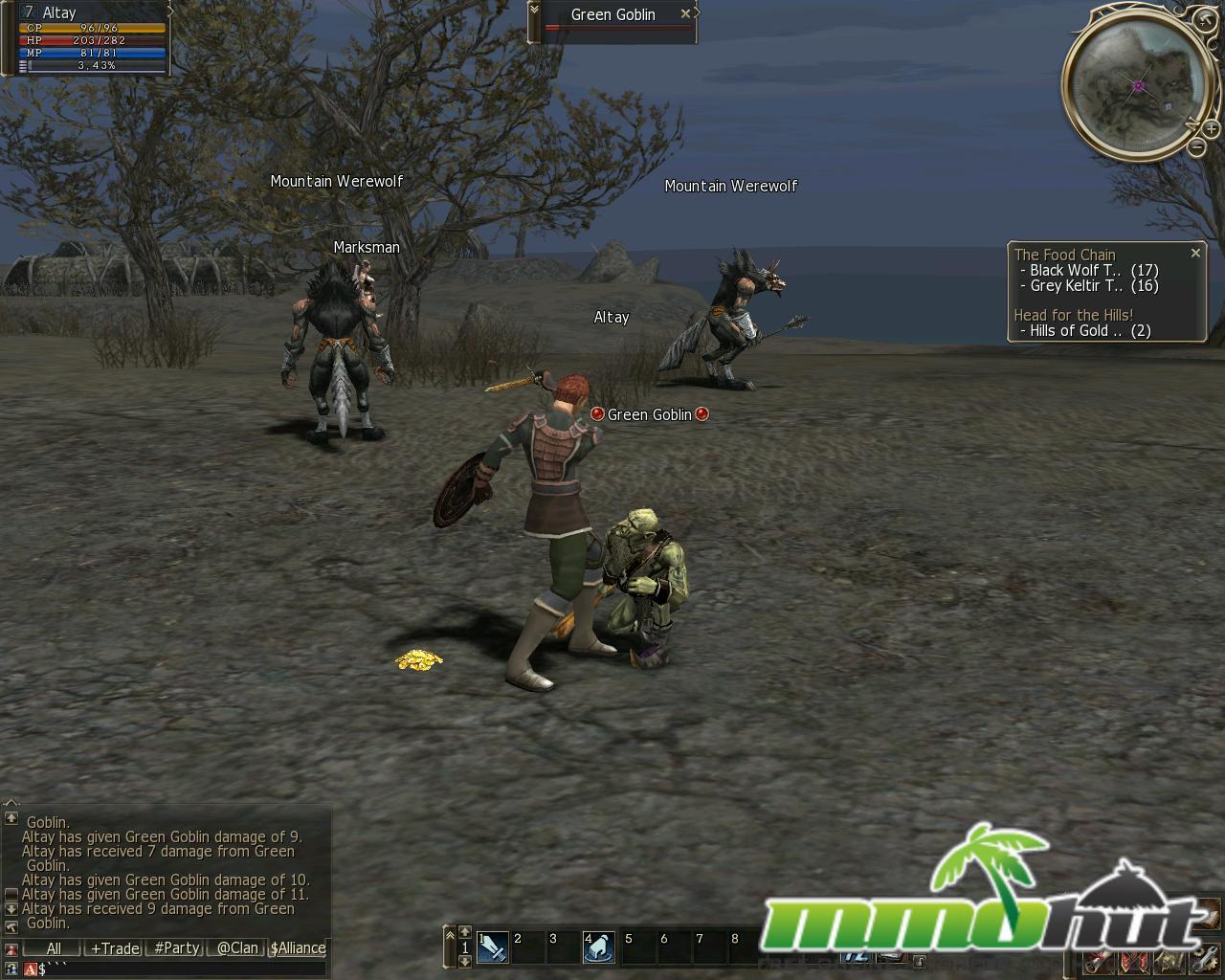 Following a series of server mergers, Lineage 2 currently has five US servers and 3 EU servers. The population on all of these is usually ‘light’ which is a good indicator that interest in the game is waning. Lineage 2 has continued to add new features, including races bringing the total number of races to six. Humans, Elves, Dark Elves, Orcs, and Dwarves are all classic fantasy fare but the Kamael are unique. They resemble angels since they have large white wings, but are actually more associated with darkness in the game’s lore. They are also the only race with gender specific classes. The rest of the races can start as either Fighters or Mystics and further branch out into one of the 36 classes as they level up. For a more complete race and class guide, see our overview section. It should be noted that some races have access to far more classes than others which leaves many races like the Dwarves feel incomplete. Appearance customization is very limited, besides gender players can chose from a few hair styles, face styles, and hair colors. Clothes and other party parts cannot be customized.

After entering the game, players are met by a simple interface and 3D graphics powered by the Unreal 2 engine that have stood up surprisingly well since 2003. A tutorial prompt explains the game’s basic movement and even has optional voice overs. Movement is done exclusively with the mouse in Lineage 2 which is unfortunate. Even most Asian MMORPGs that are 3D give players the option to walk with W,A,S,D. The tutorial goes on to explain combat (click on a target), and picking up loot. Each race has its own starting area, but they are all equally empty. There are a few quests available, each area has one that involves talking to nearby NPCs. Completing this alone brings players to around level 6, but things slow down considerably after that. The bulk of the quests are simple, repeatable, fetch quests which involve bringing back fangs from wolves, or other items from monsters. 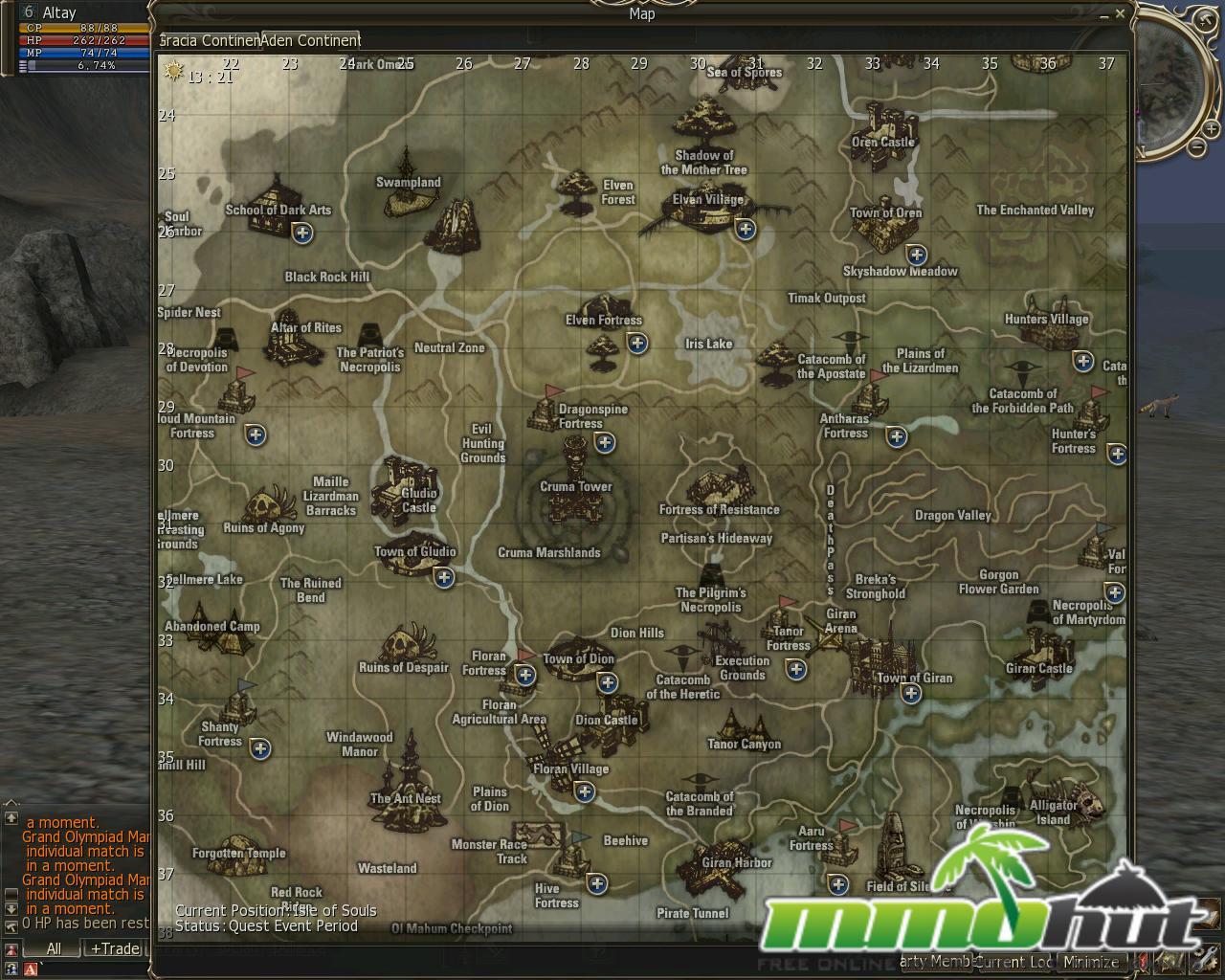 As players level, they will unlock new skills and spells. Lineage 2 does have attributes like STR, DEX, CON, INT, WIT, and MEN but these go up passively as players level or equip new gear. The current level cap is set at 85, and players must undergo 3 job changes along the way. Class transfers require the completion of lengthy quests that often start several levels before the actual class change can be done. For example, players start the first class change quest at level 18 but must wait until 20 before actually making the transfer. The second change is made at 40, and the third at 76. For a full list of classes and their descriptions, players should check out ‘The Library’ on the official site. A full list of all available quests, monsters, and items can also be found there. Lineage 2 takes the old school approach the gameplay, so expect a lot of heavy grinding. When players click on a monster, their name will appear color coded. Lighter shades indicate that the target is lower level and easier to take out. Monsters are very predictable, but the huge environments make finding new hunting grounds or traveling between areas frustrating.

Jack of All Trades

One of the more interesting features in Lineage 2 is the ability to take on subclasses after hitting level 75 and completing a special quest. There are some restrictions involved, for example classes of the two Elf races don’t mix, but most class shuffling works fine. Sub classes start at level 40 and players can switch between their sub class and their main class by talking to a special NPC. Once a player hits level 75 with their sub class, they can take on up to two more. Players can ditch one of their three sub classes to learn a new one if they so chose. The subclassing system allows players to invest all their time into a single character rather than grinding up half a dozen alts. Grinding alone is inevitable in Lineage 2, but at least players can call pets to fight alongside them. Several classes can summon pets, but even those that cannot can enjoy some animal companionship. Certain items and quests grant players various monster pets which can hold items, wear equipment, and stay with the player as long as they are well fed. There is also a small fishing mini game to help kill the time. Players can catch ingredients used in the game’s simple crafting system. 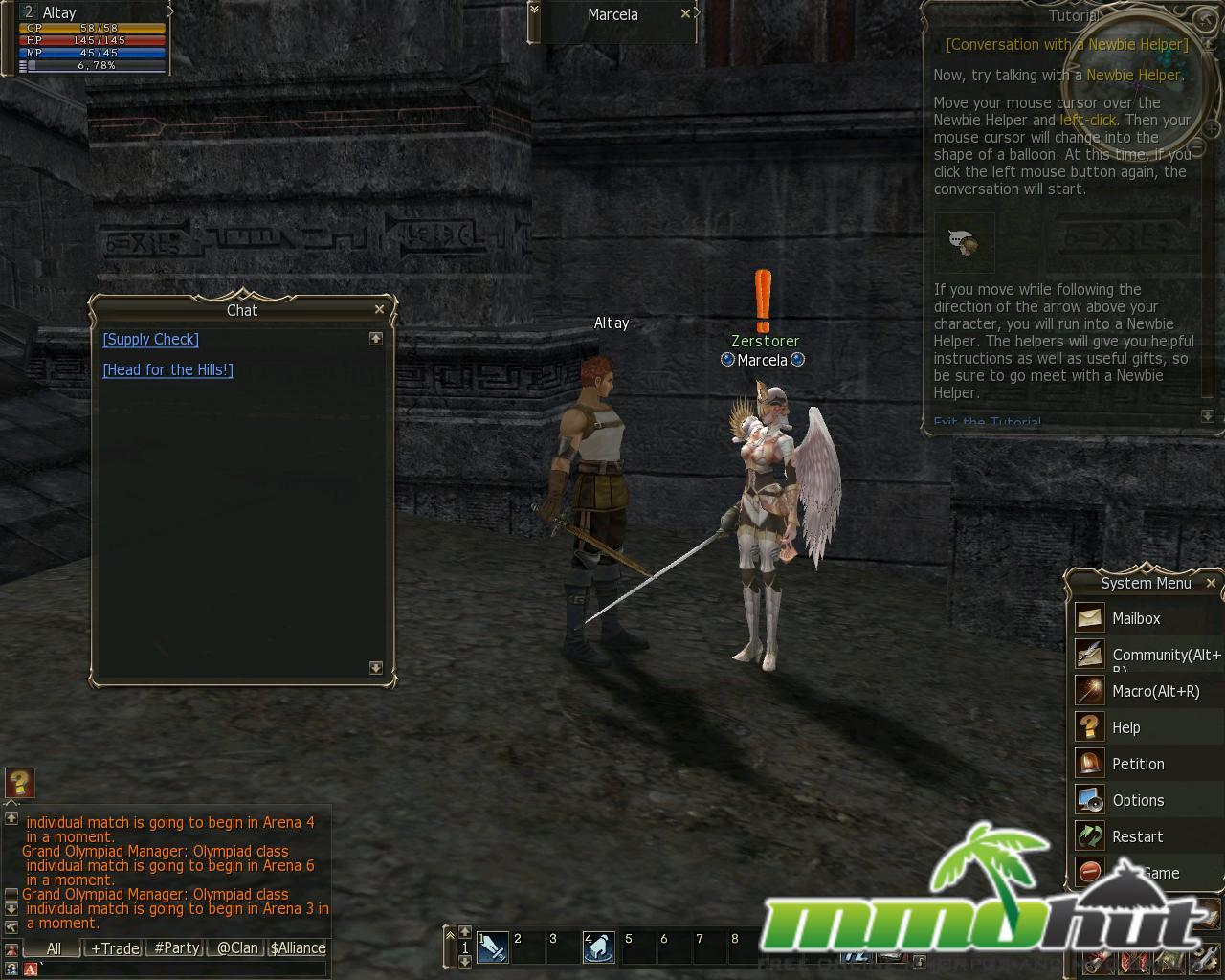 Like the original, Lineage 2 heavily promotes player vs player combat. Players can attack one another anywhere outside town though they risk penalties for doing so. Kill enough innocent players and you’ll ‘go red’, like in Ultima Online, which means others can attack you with no penalty. Back when Lineage 2 was more popular, almost every camp spot was filled with bots. Many frustrated players would kill these bots, even if it meant temporarily leaving themselves open to retaliation. Botting, bugs, and technical issues still persist. The game crashed several times before I ran a ‘check file’ scan from the patch screen. But enough about that, let’s get to the good stuff. Besides ‘world’ PvP, guilds can participate in Castle Sieges. These castles originally started under NPC ownership but can be taken over by player controlled clans. Once conquered, the clan leader has to schedule a siege time within the next two weeks so that others can have a shot at running the surrounding area. Control of a castle grants occupying clan influence over the surrounding region. Tax rates can be adjusted for the local NPC vendors, and the clan leader is even given a flying mount to ride. As fun as the castle fights sound, players are more likely to spend their time grinding it out in small groups. Lineage 2 isn’t a bad game, but there are many free to play MMORPGs available today with many of the same features, graphic quality, and gameplay.

Lineage 2 doesn’t look bad for such an old MMORPG. The trouble is that the gameplay is outdated. Even with a huge world to explore, a diverse class tree, and open PvP, Lineage doesn’t have enough to draw in new players. Veterans who enjoyed the game but quit from boredom should give it another try. The recent expansion and updates have added plenty of content.
Official Site